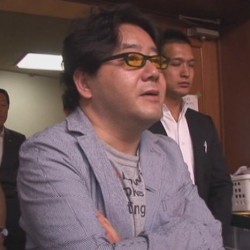 The Man Who Made AKB48 – aramatheydidnt
A very respectful profile and interview, but success tends to beget that.

Hirano Aya joins 9nine in sitcom “Konna no Idol Janain” – Tokyograph
Aya, if you’re gonna sleep with multiple members of 9nine, PLEASE document it with many many photos.

Top 10 Favorite K-pop Songs of 2011 – Love’s Spell
A solid list with extra love for Big Bang and After School.

Tachiagal Review – New life
Raelyan has mostly positive things to say, and is delighted that the girls all seem to be getting along well behind-the-scenes.

Big ol’ best of compendium of 2011! – fly in the f*ing wine
Mara covers a whole lot of ground here, and leaves plenty of food for thought along the way.

capsule to release new album in March – aramatheydidnt
This one will be called Radio Active Japan. (Yes, I’m recycling that joke.)

Happy 17th Birthday to Maeda Yuuka~^^~!!! – Chuu Sugoi Idol
She’s getting old anyway, so I guess it’s okay that she leaves the business.

262 foot wide wide poster for AKB48’s new documentary placed in Shinjuku – aramatheydidnt
They should sell this as wallpaper for AKB wota.

Top 10 H!P songs of 2011 – Genki Almost Idol
Martha shares her favorites, and of course there’s an emphasis on being positive and energetic.

1st half of year predictions for 2012 SMAP-Tackey & Tsubasa – Never Ending Music Power
A look at what the future brings for the older JE groups. No word on anyone running around drunk and naked, though, so I’m disappointed.

Back To The Beach and a Site Update! – Hello! Project Feet
This shot is more about butts than feet, but I ain’t complaining.

Morning Musume- “PyokoPyoko Ultra” Short PV Preview – Hello! SayuNii
The Momusu part is interesting, but the whole clip about idols is worth watching.

The cutest thing ever in NHK Kohaku history ^^ – aramatheydidnt
It’s so cute that bloodletting is inevitable for karmic balance. My money’s on Goofy being beheaded mid-song.

So I Created a 48 Glossary – MELOS no Michi
This is very, very, VERY helpful. Many thanks!

Our pick for Best Songs of the Year are… – Seoulbeats
The Seoulbeats crew share their poll results.

COUNTDOWN TO NEWS: Tegoshi Yuya – Never Ending Music Power
The flamboyant member of Tegomass takes his turn in the spotlight.