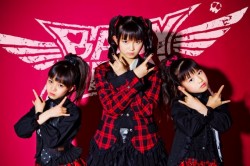 BABYMETAL to release joint CD Debut “Ii ne!” – yonasu.com
You know what’d be real metal? If the girls did a photobook in black leather bikinis!

Wonder Girls, Girls’ Generation & 2NE1 to make their US debut in 2012 – allkpop
I’m rooting for Sohee and company to do best, but a part of me thinks it’s 2NE1 who’ll make the biggest impact.

Evaluating 2011: female artiste/model who caught my eye…is ローラ – live everyday to it’s fullest
I love this article and how it focuses on aspects of Rola’s presentation.

倖田來未 – feel my mind – Plastic Candy
Alvy continues his J-urban series with this look at the early Koda Kumi album.

Harajuku Poupées: Lolita – Plastic Candy
Alvy also starts a new fashion feature which ties in with the J-urban series! A very nice primer on the different types of Lolita.

Sakiko To Get Her Own Album? – IXA Ready
That is, if Aki-P has his way. But it’s not like Aki-P ever gets his way, right?

A quick look at Tanaka Juri – Never Ending Music Power
Thennary takes a moment to look at this Junior and his taste in women.

No Sleeves [Pedicure Day] 1st Week Sales + Review – MELOS no Michi
Kyttyee likes the range of styles on display in this release.

Sohee gets named as the idol whose skin secrets are coveted the most – allkpop
She puts the lotion on the skin, or else she gets the hose.

Because You Were There for Me: Kitahara Rie’s Close Friends – MELOS no Michi
The series continues to stray from family members, though this ties in nicely to the team dynamic of a group such as AKB.

Jmovie review: Norwegian Wood – HamsapSukebe
It’s been a very long time since I last read Murakami’s novel, but Akiramike’s review makes me want to both see the film and re-read the book.

When Fans Cross The Line – IXA Ready
Again with this bullshit? As I’ve written before, maybe it’s time to re-assess just how accessible these idols should be, given their level of popularity.

Tokyo Jihen to disband in February – Tokyograph
Looks like Shiina and company are going out in style, with a tour and several releases before calling it quits.