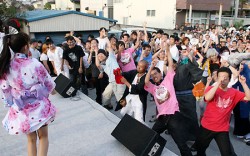 Wotagei Guide for AKB48 Concerts [2.0] – MELOS no Michi
You know what they say, “When in Akihabara…”

Noriko Kijima ~ DGC No.664 – Jappydolls
This is older material, but young Noriko is quite choice eyecandy.

Oshima Yuko claims center position for “AKB48 Stage Fighter” + Kitarie to write Not Yet’s lyrics? – aramatheydidnt
This looks to be a great year for Yuko. Maybe she can reclaim the senbatsu throne?

Ayu never technically married to Mannie – aramatheydidnt
I guess she was having second thoughts from the start?

Girls’ Generation – The Boys (U.S. Album) – Selective Hearing
Greg does the dirty work of clearing up why this release shouldn’t be getting people’s hopes up.

Nana Mizuki – “Synchrogazer” – Shanimuni Paradise
Tsukiki decides to expand her horizons but finds a familiar face in the process.

Pic of the Day – Your Opinion Doesn’t Count
Langdimus proves he has mad deductive skillz.

Counterpoint: The DJ is Patient – Seoulbeats
Ashley considers the bright side of this release and what it means for the Girls.

SDN48’s Serina reveals her post-graduation plans -aramatheydidnt
And hey, she can look up Nakanishi Rina if she’s looking for work.

SMAP’s Tsuyoshi Kusanagi to support Japan at the Korea Expo – MomoEdgewood’s Mediawatch
I know there’s a naked-and-drunk joke I can make here, but I’m drawing a blank.

Iwasa Misaki [Mujineki] Full Radio Rip + Short PV – MELOS no Michi
A shining review that asks what other hidden talents may exist among the AKB girls.

Clothing line apologises for KAT-TUN tweet Around mid-January a… – Idols and Hollywood
I love Junno, especially when blonde, but I agree that this all seems overblown.

Shinhwa’s Eric turns down acting offers in favor for Shinhwa’s comeback – Koreaboo
The boys are getting serious.

your gold, my pink TRAILER for TEENAGE RIOT “青い春” – Neaux Clicked On It
Doesn’t compare to the Sonic Youth song of the same name, but I’m sure Thurston would approve of the randomness of the video.