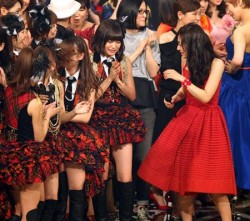 Nia’s Hopes and Dreams for 2012 – Nia’s Wonderland!
Nia makes a list of what she hopes for 2012, with some hopes that I really agree with *coughEriponcough*. The post is well thought out, and a very good read.

Multiple Kikka’s + Sock Puppets = Amazing – Nia’s Wonderland!
Nia is impressed with Kikka’s latest song, and has created a fun post about why she likes it. I also love the little dig at Mano Erina in there, mwahaha!

A magnitude 7 .0 earthquake hits eastern Japan, no danger of a tsunami – aramatheydidnt
It’s sad that Japan’s New Year started this way, however, our prayers and thoughts are with Japan.

NYC – Wonderful Cupid PV/Garasu no Mahou – aramatheydidnt
Watching this, I couldn’t help but wonder ‘When will Ryosuke take his shirt off in a PV…?’ – No joke.

Inoue Mao sheds tears for the victory of Red team on Kohaku – aramatheydidnt
Of course Red won – it’s AKB48’s 2011 and everything went their way.

Music Is Like Oxygen
CJ of The Groove Music Life is promising an album review every day on his new blog, starting with Whiteberry.

Plastic Selection: 2011 in K-Pop – Plastic Candy
Alvy looks at the hallyu wavw in detail as well.

BoA’s New Year’s resolution is to fall in love – Koreaboo
Why hello, there, BoA!

Yo! I am Chiima, a blogger and Wota here~ I enjoy writing and giving my say to what I like and don't like. I am the blogger of Okay! Musume Time. I am also a contributor to Selective Hearing.

View all posts by Chiima →