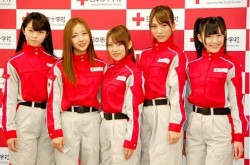 NHK to broadcast live concert for anniversary of Tohoku earthquake – Tokyograph
AKB48, Perfume, and SMAP will be headlining, making this a major event on many levels.

AKB48 25th Single “GIVE ME FIVE!” – Kira Kira Anni
I get the concept but the execution leaves something to be desired…

Quality Over Quantity – Love’s Spell
Going over the latest releases and upcoming announcements in Hello! Project.

‘THE WONDER GIRLS’ movie theme to be titled “Like Money” – allkpop
Cash rules everything around me, CREAM, get the money, dollar dollar bill y’all.

Photo of the Day! – Genki Almost Idol
Some really wonderful shots of Mii-chan. Too bad she didn’t do a Roxanne Pulitzer with her BabyBlossom instrument.

Quick Hit: T-Ara’s Stereotyping of Native-Americans in YaYaYa – The Grand Narrative
Maybe they should team up with After School Red and Momoiro Clover Z?

Johnny’s at University – MomoEdgewood’s Mediawatch
A very helpful guide of who’s done what higher education in the JE world.

Mr.Children announces new single + live DVD/Blu-ray – aramatheydidnt
They were quoted as saying, “One day we hope to be as popular as AKB48.”

Twitter Update + Trans: Lizzy Goes Incogneto? – AfterSchool ❤
She comes out dressed like that whenever Kahi and Jungah sodomize random strangers in their pawn shop basement.

Suzuki sensei ep 6 – HamsapSukebe
Akiramike continues to have fun with this series and its take on school life.

Riho Sayashi is Growing Up Fast! – Hello! Project Feet
Well, not TOO fast, I hope…