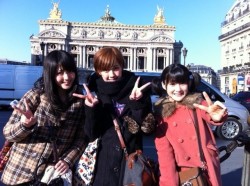 Moulin Rouge Gets Some Buono! Action – Hello!Blog
Another excellent, well-detailed report of the epic event.

Hallyu star Bae Yong Joon asked to be set up on a blind date – allkpop
Well, not a blind date… She just has cataracts and false teeth, but that’s typical of Yon-sama’s fan base.

The results and pictures of the 2012 AV awards – aramatheydidnt
The ladies look so lovely.

Still Not a Fan of U-KISS? – Shanimuni Paradise
I’m not convinced, but I’d say Tsukiki is making a very good case.

Summary of the effect of Jin Akanishi and Meisa Kuroki’s marriage on their careers – MomoEdgewood’s Mediawatch
What’s that old saying about marrying in haste…?

SPEED adds a new member, Saejoon – allkpop
Is this a replacement for Hitoe? No, wait…

Wonder Girls get nominated for ‘Best Asian Act’ by Nickelodeon Kids’ Choice Awards – allkpop
Oh come on, the deck was clearly stacked in their favor!

Yamada, Chinen and Nakajima from Hey! Say! JUMP graduate from high school – MomoEdgewood’s Mediawatch
But they were made into men a long time ago…

You have to suit your schedule to AKB48’s unless you’re SMAP or Arashi – aramatheydidnt
Aki-P is so powerful, Chuck Norris schedules HIS appearances around AKB48!