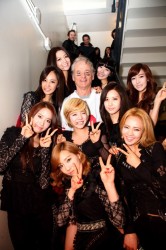 Pic of the Day – Your Opinion Doesn’t Count
So were SNSD lost in translation? (Couldn’t resist.)

So SNSD Made Their US Morning Show Debut This Morning… – The Groove Music Life
… As well as the following morning.

U.S. magazine “The Atlantic” asks, “Does Korean Pop Actually Have a Shot at Success in the U.S.?” – Koreaboo
Addressing that article which is gaining some notoriety.

Simple isn’t Always Good – AKB48’s ‘Give Me Five!’ PV Review! – Okay! Musume Time
Chiima doesn’t like the video, likes the song, and is finally being won over by Yuko.

[IV] Fonchi ~ If Boku no Imouto – Jappydolls
So this is why she really didn’t need Idoling!!! anymore.

StylipS – “STUDYxSTUDY” Cover and MV Preview Released – Hello! SayuNii
Ado finds this group offers something of interest for fans of the individual members.

Murakami Sara Is Now Part Of A Group Called “Gekidan Her Best” – Hello! SayuNii
Another Momusu audition survivor moves on.

16-year-old Swedish boy to make his Visuel Kei debut in Japan – aramatheydidnt
I shouldn’t be turned on, but I really really REALLY am. Really.