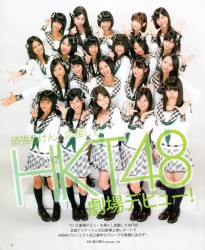 HKT48 announces formation of Team H + 1st stage – MELOS no Michi
Our Pop Overlords have deemed this unit ready for battle, I guess.

Four Leaves Ko-chan Dies of Cancer – aramatheydidnt
Condolences to family, friends, and fans of the singer.

Ninomiya Kazunari and Sasaki Nozomi have broken up – aramatheydidnt
… So stop sticking needles into that Nozomi voodoo doll, Leader.

UEE is in charge of discipline for After School – Koreaboo
Yes, I’m thinking dirty, Ilsa She Wolf of the SS type thoughts.

Photo – Idols and Hollywood
But THIS is hawt. I especially like the behind-the-back shooting.

Photo – Idols and Hollywood
I dunno, Zukki’s not really selling the gun-toting space babe vibe, is she?

Photo – Idols and Hollywood
No, no, don’t do it! Things’ll get better for Momusu, I promise!

Story behind the red outfit: Mayuyu: Look at my cute hair bow… – Idols and Hollywood
What is this? No zapgun? No pink bunny outfit? I’m confused!

Kuroki Meisa “UNLOCKED” Excite Interview Translation – aramatheydidnt
She says nothing about Jin or the baby, just in case you’re wondering.

Bunshin ep 1 – HamsapSukebe
Akiramike is excited by this new drama and its intriguing premise.

Super Junior-M’s Henry performs a cover of “Give Me Everything” – allkpop
After his duet with Amber, I’ll pay attention to anything Henry does.

Return of the Babymetal – Beat Laments The World
The best part of the video is that weird rapper interlude.

[wow] AYUMI HAMASAKI – VIVI APRIL 2012 SCANS ★ – aramatheydidnt
I like the big DONG towards the end.

30 Fresh Faces – Pure Idol Heart
Gaki sets out to show us more idols we may or may not have time to follow and love.

“LIAR GAME” movie gets spinoff drama starring Ashida Mana – Tokyograph
Ashida continues to explore the dark side of her personality.

Arashi holds mini-live in Miyagi for Tohoku disaster victims – aramatheydidnt
… And then Nino said something about pandas and it all went berserk.

Photo of the Day – Genki Almost Idol
Chisa’s got attitude!