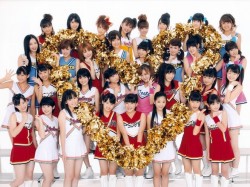 西野カナ – to LOVE – Plastic Candy
Alvy is pleasantly surprised at how Nishino Kana handles being a cute pop star on this album.

~AKB48 celebrates 5 years of tears and emotions~*… – モーニングBerryz48
Thanks to a PV, MB gets all misty-eyed over idols and the hard work they put in. You should, too.

NEWS – NEWS Nippon PV review – Never Ending Music Power
A PV review of back when the group was twice as big as it is now.

Pic of the Day – Your Opinion Doesn’t Count
“I can count to two!”

Mayuyu Battles Yamapi For Chart Domination! – IXA Ready
Give the two of them knives and let’s make it interesting.

Harugon To Go Under The Knife – IXA Ready
Best wishes for a speedy recovery to her!

PARTY PEOPLE WARNING: M Flo reveals tracklist + previews – aramatheydidnt
Get a taste of the new m-flo album and see what you like.

Maybe you were Thinking this~ – Konno’s Story
KonnoAsami ain’t too hot over Big Bang.

Brown Eyed Girls celebrate their 6th anniversary – allkpop
Six years? That’s a lot of catching up for a new fan like me.