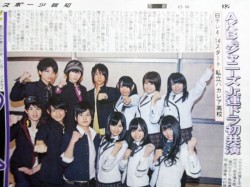 NTV outlines behavior rules for AKB48, Johnny’s Jr cast of TV drama – aramatheydidnt
Yes, these rules will be strictly observed. We all believe it’s a foolproof way to keep the Juniors and AKB apart…

Team 4 & Johnny’s Jr To Star Together In Late Night Drama – IXA Ready
… Meanwhile, a dissenting perspective from a place we call Reality.

JKT48 + AKB48 Joint Concert March 3 YouTube – Pure Idol Heart
If you get a chance, this is probably worth catching.

[Gorgeous] AeLL.’s Shinozaki Ai for Young Animal + Monthly Young Champion – aramatheydidnt
Because her singing skills are in abundant evidence in these photoshoots.

KARASIA: Going Solo – Seoulbeats
An appreciation of all the effort placed into the group’s concert performances.

A Meisa-centric mini chapter in the JinxMeisa Saga – aramatheydidnt
Oh Demi, your legacy lives on.

Jimi’s back in… – Jrocknyc
Tommy’s molding Jimi into a retro pop star! And doesn’t this remind you just a little of when Dirk Diggler sang “You Got The Touch”?

Kou Shibasaki- “Strength” extended clip – Neaux Clicked on It
The song and video is very playful, but why does Kou look so old?

Gravure idol, Risa Yoshiki to release first album, ‘Poche’ on 03.28 – aramatheydidnt
If this sounds as good as she looks, it’ll be… fair to middling.

Photo of the Day – Genki Almost Idol
A great bikini shot of Longcat.