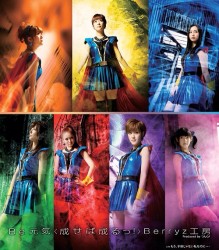 Surprise! We’re Doing it Again! – Nia’s Wonderland!
Nia gives her 2 cents on the matter at hand, and apologies to the saner of the fans for such behaviour!

Berryz Koubou’s new single has some covers you might not hate! – aramatheydidnt
The superhero cliches are all there, but I get a weird Alex-Ross-at-his-pseudo-mythologizing-worst vibe with the Limited C cover. (Think the oversaturated colors of Justice.) Therefore, it’s my favorite.

Happy 20th Birthday Momochi – Berryz Kobo International
Happy birthday to my once (and possibly future) idol obsession! No expectations for you to start acting your age cause, y’know, you’ve got your shtick and gotta earn the bucks.

The Incident… – Konno’s Story
KonnoAsami has his own say on that whole T-ara / Momoko matter.

AKB48’s suicide prevention commercial + messages from members – aramatheydidnt
I like Takamina’s message best, and hopefully they can all make a difference.

Ad: After School for Rexena Deoderant – AfterSchool ❤
It’d be great if there was a Scratch-n-Sniff promotional featuring Kahi’s pits.

Kanjani8 gearing up for their anniversary year – Never Ending Music Power
Are there plans to deliver Yokoyama Yuu in nothing but a ribbon to my front door? No? So why should I care?

Kuu talks about her struggle with love and her career with Blenda – aramatheydidnt
Alas, she doesn’t talk about life as a wife or expectant mother.

Oh the things idols would do for love – Japanese Entertainment Rumors
I love the part about the cardboard box.

Watanabe Mayu – Synchro Tokimeki PV – Selective Hearing
Greg declares this a “geek’s wet dream”. That’s like a thumb’s up… or something up.

Itano Tomomi 3rd Single to be Released April 25 – MELOS no Michi
After a long delay, it looks like this is finally going to happen.

This Week in Music 03.07.2012 – New School Kaidan
A lot of great idol releases this week, very little of it from the Big Two!

Perfume Global Site Goes Live! – Perfume City
Hopefully, the rest of their back catalog – including PVs – will follow JPN into global availability!