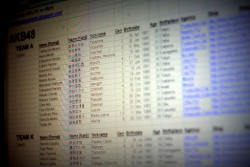 Bring Out The Measuring Tape – Selective Hearing
Meanwhile, Greg apparently had a run-in with a completely useless tool of the fan base.

Yurina Kumai & Chinami Tokunaga – Foot Torture – Hello! Project Feet
Every once in a while, we’re reminded of how fetishy this site is. Bravo!

Oshima Yuko to Star in [Kaeru no Oujo-Sama] – MELOS no Michi
Yuko’s lining up a good deal of acting work, apparently…

Yuko Added To The Cast Of A Musical Drama – IXA Ready
… But do any of them involve her sleeping around some? (Please?)

Diagnosing Sayumi with Narcissistic Personality Disorder – Chuu! Sugoi! Idol
That list of symptoms can apply to most any highly popular idol, I think.

Ai wo kudasai eps 1+2 – HamsapSukebe
Akiramike finds one saving grace with this show, and her name is Kanno Miho.