Okay, I finally got my hands on a copy of Shirome.  For those not in the know, Shirome is Momoiro Clover’s movie debut.  It is also a horror movie of sorts, which is kind of a rite of passage for idol groups.  But let’s face it, Japan does horror and creepy movies very well.

On one hand, I was really excited about this movie.  For no other reason than Momoclo was in it.  I have been following this group since their first indie single, and had a chance to see them live before they had developed the fanbase they seem to be growing. In fact I ill find out how much it has grown when I head back to Tokyo for their new single release events. 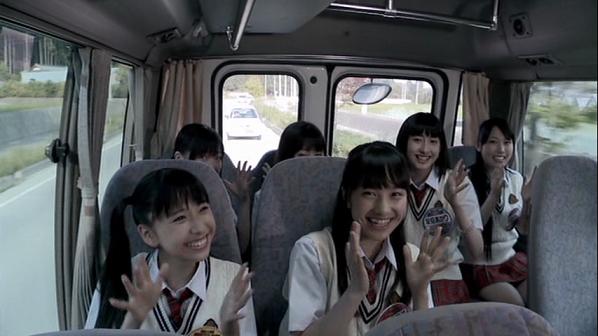 On the other hand I wasn’t sure how comfortable I would be watching a bunch of young girls being repeatedly scared into hysterics.  I don’t think I really need to explain this, I’m just not a sadist!  But whatever, I have the DVD and I’m gonna watch it! 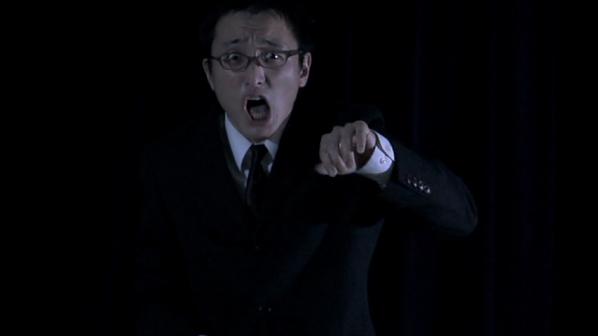 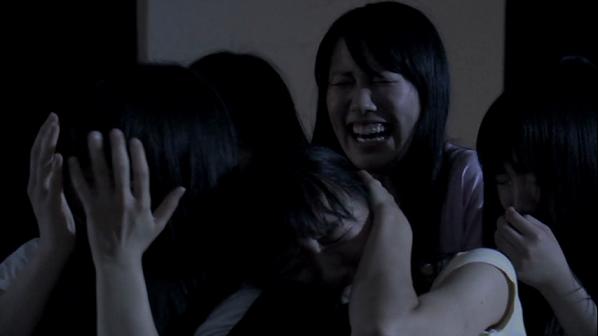 Most of the “scariest” moments involved this guy.  The girls get a surprise at their rehearsal when he shows up to tell them the legend of Shirome.  Now my Japanese is not good enough to follow along every nuance of the dialogue.  But you can get the gist of what’s happening throughout the film.  As he tells the story he eventually becomes possessed, resulting in super scary moment #1 for the girls.  He would later come back for what ended up being the best moment in the movie. 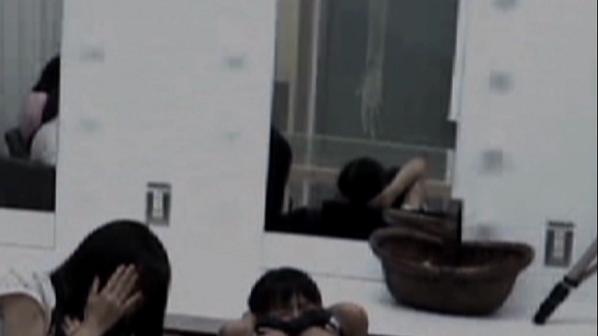 A lot of the freaky stuff going on was definitely added in post production.  (Notice the outstreched hand in the mirror)  Strange lights showing up in the camera and video interference usually signified something scary was about to happen.  But as a result some of the scenes were a bit anti-climactic.  A good example was the “slumber party scene”.  In fact it made me wonder if much the girls were in on the “joke” after all. 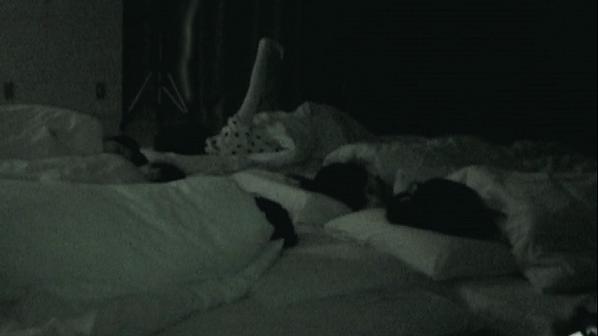 It was tough to catch in screencaps.  But little lights would show up over them as they slept, and they would wake up or shift when they did. 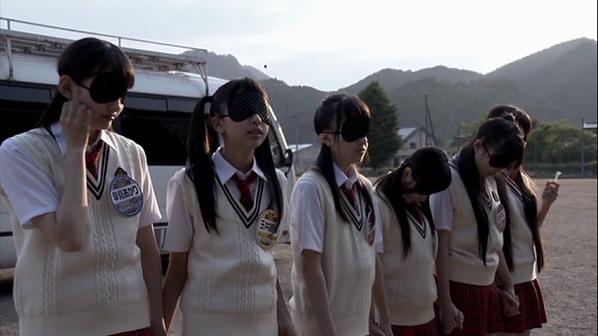 The girls eventually end up at an abandoned school, where I guess the legend of Shirome as supposed to take place.  Initially the girls were totally frightened of going into the school, but they would be accompanied by two spiritual experts.  And that seemed to really calm them down. 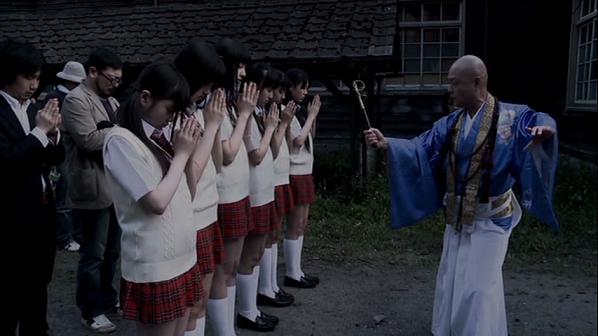 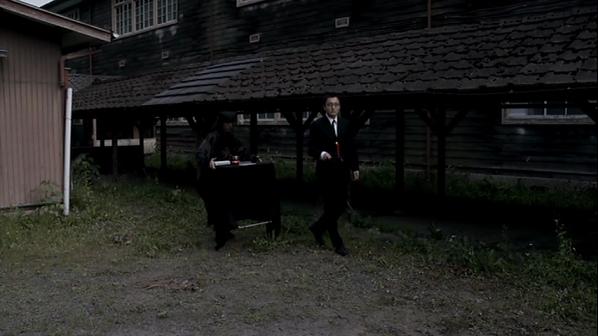 But before that could happen in stepped the creepy guy from scene one for another seance of sorts. 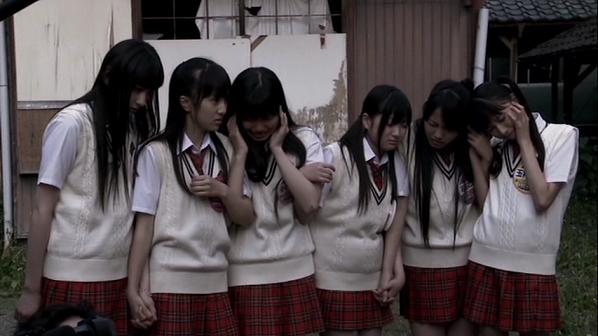 After showing the girls a creepy film of some guy who I guess had first hand experience of whatever happened at the school,he again starts telling his scary stories much to the chagrin of the spiritual guy. 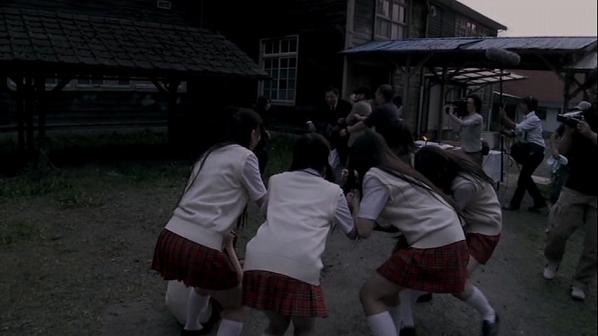 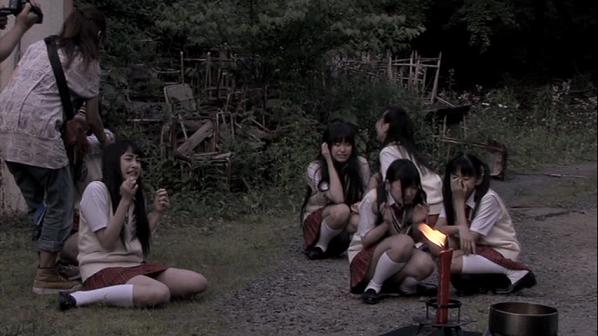 And of course he goes into “freak-out” mode, which gets the best reaction from the girls in the entire film.  Unfortunately this was also the same scene they used in the movie’s trailer.  So we already knew what was going to happen. 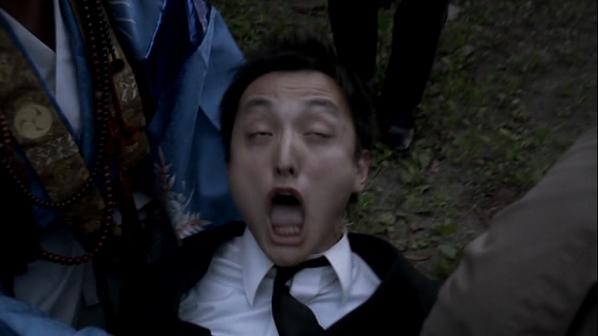 Hahahaha, I love that shot!  His eyes would roll back into his head.  This guy was great!

The girls seemed really calm while they searched the school.  They just didn’t seem too fazed by all of the noises emanating from the school.  My guess is they felt safe with the two experts joining them.  This also led to probably the funniest portion of the film.  I’m not sure if this was done with intentional “toungue-in-cheek”  But I’m thinking with the Japanese sense of humor it probably was done on purpose.  Yes the ghosts seem to have a way of leaving a trail of sorts… 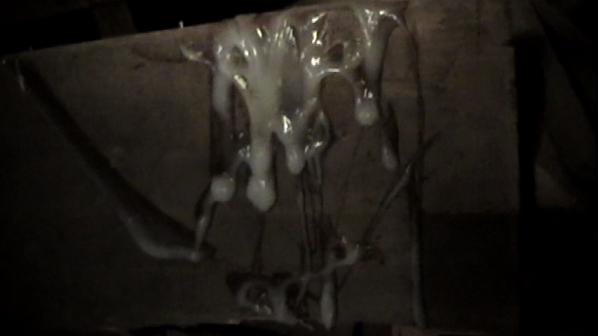 Hehehe, are you sure that is from an evil spirit?  I’m thinking a few over-zealous wota may have been in the area.  There is no way the producers didn’t know what this would be reminiscent of.  Too funny! 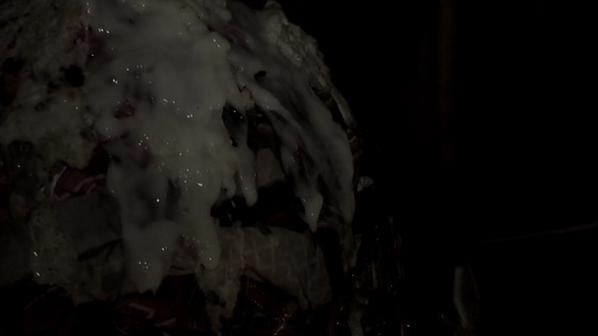 They finally make it to Shirome’s shrine?  So Shirome was a chronic masterbater?   At the end of the day it is decided that even the dead can’t resist the charm of cute loli idols.  Momoclo does what they do best, break into song! 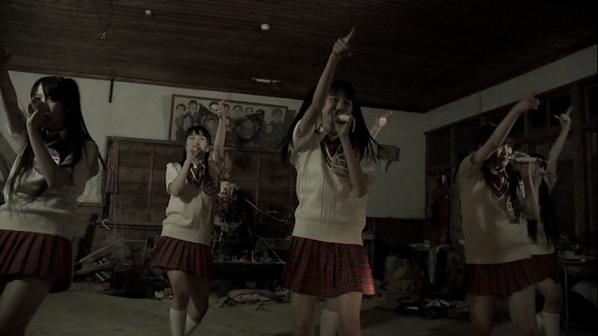 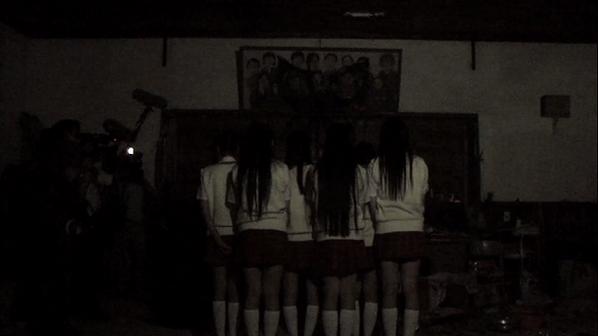 After the performance the girls pay their respects to Shirome, and all was well…I think! 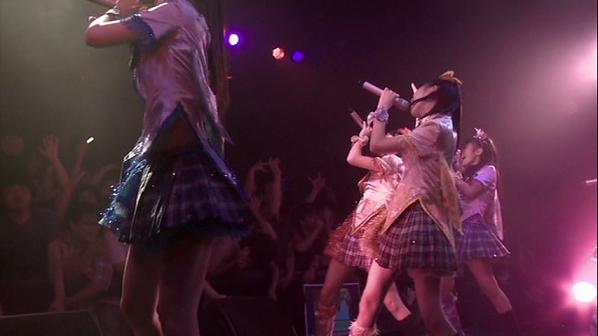 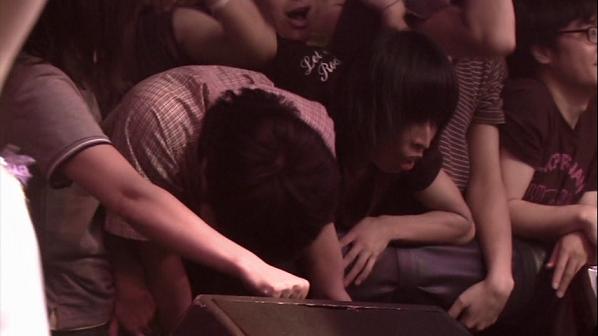 There is a little coda at the end that is straight out of “Gimme Shelter”.  Momoclo is performing live, and if you watch the crowd closely you can see the little lights from earlier in the film show up.  One by one the fans in the front row start freaking out.  I was waiting to see if any of the girls would react, but they didn’t. 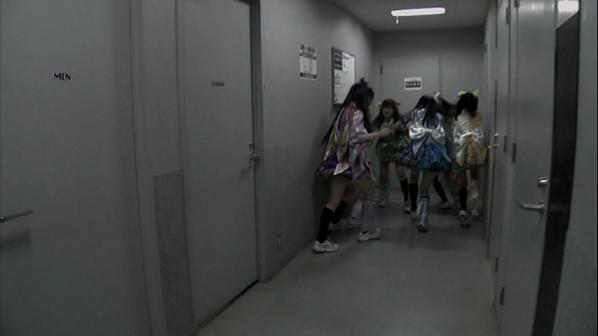 And at the very end we learn Akari was in on the joke, as she and the producer become posessed for the last big freak-out moment.  Once again, the girls’ reactions were awesome here!

Overall it was a decent film.  Not awesome, but I love Momoclo and could watch them in just about anything.  You will appreciate it a lot more if you are a Momoiro Clover fan.  If not, you might find it a bit cheesy and sometimes cruel.  But as I said earlier, I think the group was in on the bit more than the promotions department let on.

By the way, you can pick up a copy of Shirome at all the major Buy Sites (I got my copy from HMV)  The film also features the song  Coco ☆ natsu, which is from their upcoming single.

CK in Japan Days 3-4…A Lot of Major Acts in One Big Place + Momoclo!

4 thoughts on “Scaring the Crap Out of Momoclo”