It seemed like it had been a while since I had been to a 48-group related handshake event. Since the first weekend of 2018 I had only been to one, and that was kind of a blur since I basically showed up at the end of the night and oshi-mashi’d all of my tickets. So it was nice to spend a proper afternoon meeting with members.

I had eight tickets in total, spread out between Slots 4 and 7, pretty much all for my regular girls. That meant I could cruise into Makuhari in the early afternoon. I actually tried to get there early and have a leisurely lunch before the event, but there was a delay on the Yurakucho Line that caused me to miss my transfer, and get in a lot later than I had planned. I still managed to shovel in a quick lunch before heading to the halls. I didn’t need my tickets stamped, so once I got through security I went to queue up for my first ticket.

And a reminder, the prizes were in play. The usual 1-shot videos, 2-shot selfies, signed photos, and the trump game. BTW, here’s what the back side of the trump game prizes looked like. The other side is the member photo, and signing spot, which you will see below. 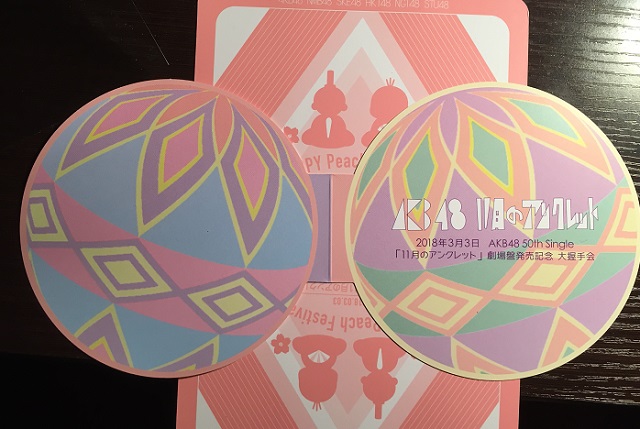 They gave you a plastic slip to put these in, but I couldn’t figure out how they fit, until I realized you are supposed to fold them, LOL!

Tani Marika (Lane 96) Marika’s queue wasn’t very long. However, she wasn’t in her booth yet, and Slot 4 had already started. I didn’t win the signed photo, drats! In the meantime I had a good view into both Goto Rara and Tsuzuki Rika’s lanes. Eventually Tani came out, but she was taking a long time signing the photos for people who won the prize. When it came my turn I congratulated her on her 400th theater show. Tani did her usual “Yeah, let me hear it” pose. However, I mentioned that I have never seen her perform in a theater show, and I really want to win one day. She was like “Yeah, you gotta come see me!” LOL.

Yamane Suzuha (Lane 18) <1st ticket> As expected, Zunchan’s queue was really long, and that was just to get to check in. The inner queue was at capacity. Interestingly, she was in the lane right next to Okada Nana, and during Slot 4 actually had a longer queue than Naachan. I didn’t win the prize for either ticket, which were 1) 2-shot/1-shot and 2) signed photo. I have actually gotten to know a couple of Zunchan’s big fans, so I had people to chat with during the wait. There were also other Wasafans in her queue, as well as the queue to my right, so we were talking as well. Per usual, Zunchan’s lane was filled with all the signs and decor. Jeez, I wish I could take a pic, it is all so cute. I already planned what I wanted to say to her for the first ticket, so I didn’t pay too much attention to the signs. I essentially told her that I had gotten cancel machi last weekend, but didn’t make it into the show, so I was sorry I didn’t get to see her.

Matsumura Kaori (Lane 95) <1st ticket> I got to her lane just before it opened, and only one person walked in. So I ended up second in line. Finally I had won a prize, the 2-shot/1-shot. I know I’m a glutton for punishment, but I decided to go for the selfie, despite the fact I am horrible at taking them. Kaotan had a really cute skirt on, which unfortunately wasn’t going to show up in the pic. I mentioned my lack of photo-taking skills to Kaotan, so she helped me steady the camera, and voila! I had a nice selfie!

Afterwords she asked how I was, and I told her that I was a little worried. She asked why, and I blurted out “Don’t graduate!!!” She started laughing, “That was just a joke” I knew that, and told her that I saw it being talked about online. Anyway, we had a good laugh.

It was somewhere around this time that they showed the HKT, NGT, STU, and whatever that other PV was. (They must have shown SKE and NMB’s before I arrived) To be honest, none of them got me too excited, although STU’s seemed quite nice. I was really only paying half attention to them though…

Yamane Suzuha (Lane 18) <2nd ticket> After heading off to another lane, I came back to find Zunchan’s queue only slightly smaller than before. I compared it again to Naachan’s lane, and this time Naachan’s was somewhat bigger. But I point this out to show that Zunchan’s popularity has reached the level of the big members of AKB, and that management should take a look at her potential for being a significant part of the group’s future. Anyway, I couldn’t think of much more to say to her, but I did notice the big sign behind her. It was something about “Hina Matsuri” and eating Chirashi “something of other” The rest was about looking forward to eating it. So I asked Zunchan what it meant, It was Chirashizushi. Okay, I should know that! She asked me if I had eaten it, which I had. So I told her I have eaten it, and liked it.

Matsumura Kaori (Lane 95) <2nd ticket> Again I got there before the slot started, but this time four people jumped in, so I was fifth in the queue. This was important since I had three tickets for Slot 6, and I was trying to fit all the tickets in. Then Kaotan was like ten minutes late to the lane. I passed the time watching Kitagawa Ryoha in the neighboring lane. Eventually it was my turn, and I got to play the Trump card game with Kaotan. It worked somewhat differently than before, and I didn’t really understand it. I just picked a card, and she said I won. GREAT! So I got a signed photo. 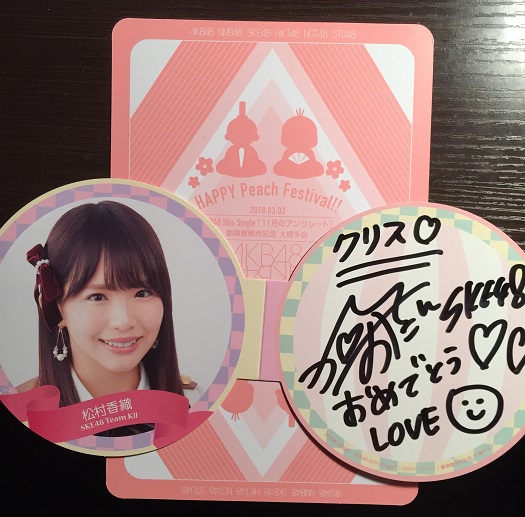 While she was signing it, I mentioned that the Trump card game is okay, but Trump the President sucks. She was like “Huh?” I was really surprised that she didn’t get it. After explaining it a couple of times, it finally clicked for her who I was talking about. “Oh yeah, people don’t like him, ne?” After she finished signing, she asked when she would see me again, and I said the SKE handshake event (forgetting the AKB shamekai is a week earlier) Oh well, by then she will have forgotten what I said.

Fuchigami Mai (Lane 76) I was actually heading to Akiyoshi’s lane, when I saw that Maichan’s queue was virtually empty. Really? At the January event her lane was ridiculously long. In fact, I ended up skipping her ticket as a result. In any case, I figured I would take advantage, and I won the prize, which was the 1-shot video. Per usual, Maichan looked adorable. Amazing looking one-piece dress, and the twin tails, WOW! Made me very thankful I won the video…

It had been a long time since I had talked to her, and she pointed that out. Probably because she saw me at the last couple events where I didn’t go to her. Anyway, I told her I loved the outfit, and that I hope to see her during HKT’s Spring Tour. She kinda spun around and did a quick modeling for me. She really knows how to melt a guys heart!

Akiyoshi Yuka (Lane 71) <1st ticket> Yuka-chan had a decent sized queue, and I was in line right behind the old guy who always tried to be first in her queue. This was later in the slot, while he was looping the queue. He and I were talking about Yuka-chan’s trip to Singapore, and how she tried speaking English and Chinese. According to him, she had limited success. So we decided I would give her an English lesson. While I waited I was watching Yamashita Emiri in the next queue, who was wearing a somewhat revealing black top. Finally it was my turn. This was another Trump game, and according to Yuka, I won, GREAT! While she was signing I said to her in English; “Did you Enjoy Singapore?” and then “What was your favorite thing in Singapore?” This time she admitted that she didn’t understand the 2nd question, so I repeated it in Japanese. She said that the Singaporean Chicken and Rice was OISHII!!! 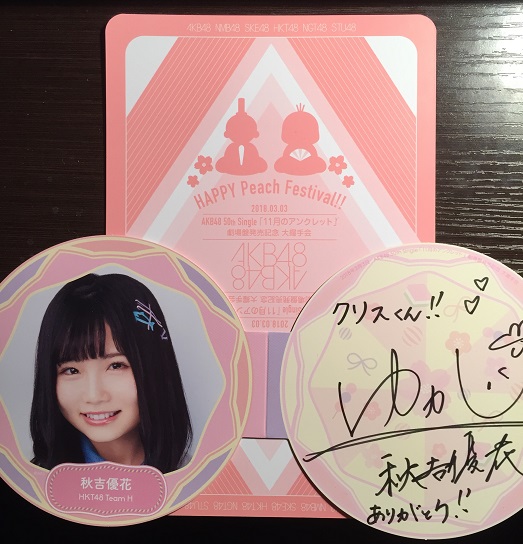 I had to wait an hour before I could use my last Akiyoshi ticket. In the meantime I went out to the food garden, and they have gotten a bunch of new food trucks, including this one! 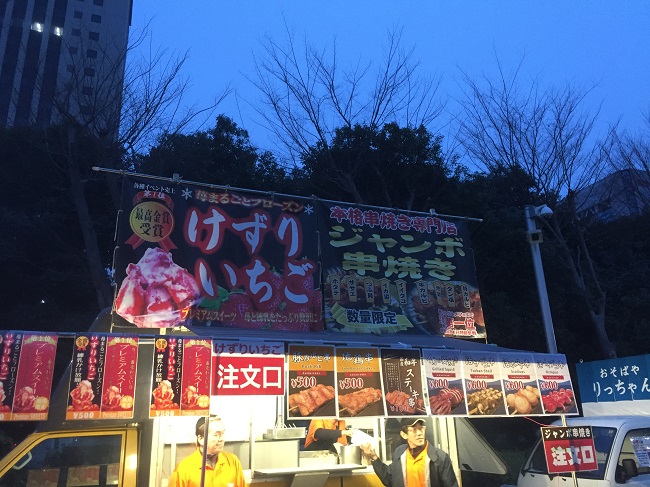 Skewers!!! Pork, beef, chicken, shellfish, tons of great stuff! So much better than when our choices were pretty much ramen or gyudon. I had a Pork Kalbi and a Sazae skewer while I waited for Slot 7 to begin…

Akiyoshi Yuka (lane 71) <2nd ticket> I pre-queued fairly early, and ended up being 2nd in line, and I won the prize! Again I was tasked with the choice of the 2-shot selfie, or 1-shot video. Since the last selfie I attempted to take with her came out badly, I decided to try and redeem myself. I told her about the last one coming out poorly, so she told me to take my time and make sure the shot looked good. 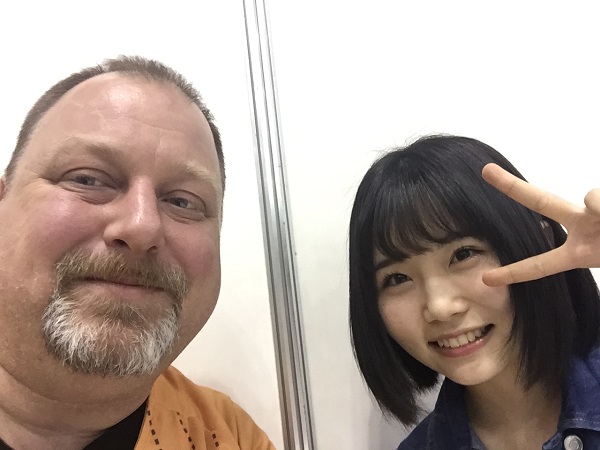 Well…at least it isn’t blurry. The guard was pretty much pushing me out from the moment I finished taking the pic, but I confirmed with her that she was not going to be performing with HKT at Sendai. She said she would only be at Saitama. I told her I would see her at the upcoming 2-shot events, and was off…

For those keeping score, I was 5 for 8 on the prizes, which is damn good! I got skunked on Zunchan though which was a bummer, and didn’t get any autographed pics. But hey, I was 4 for 4 with my 2-top, Akiyoshi and Kaotan. Yay!

Before leaving Makuhari, I stopped at the 7-11 by the station and picked up my ticket for Horipro Matsuri, which is in a couple weeks. The show is at Zepp Diver City, which is mainly standing room only. I got a great queue number too, so hopefully I will be very close to the stage. 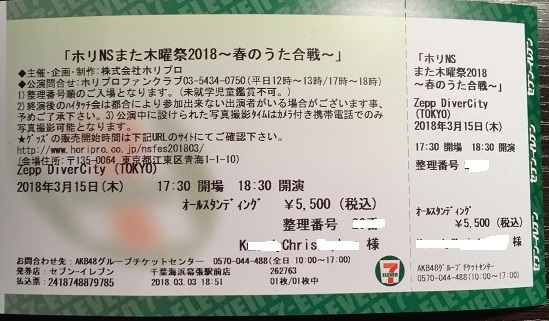 I am not attending next week’s handshake event, which means that aside from the aforementioned concert, my next 48-group related events won’t be until April, where I will be attending AKB and HKT’s album shamekai events, plus SKE’s single event. So things to look forward to. And tomorrow is the last day of Wasamin’s 7th single release week promotion. It should be a crazy day!