Kiss Bee is busy promoting the release of their newest single, which means that their schedule is filled with mini-live events at various CD shops, malls, and other assorted locations.  They had a handful of events scheduled throughout the Golden Week holiday, including the event I went to in Odaiba, and reported about here.  They also did events in Saitama, and in Kawasaki, which I wanted to attend but ultimately didn’t for various reasons.

However, my Saturday was free, and Kiss Bee were scheduled to appear at Shinjuku i-Land, which is an office complex right next to Shinjuku Reny, which anyone fond of indie idols is certainly familiar.  I also had plans to meet up with a few friends, who said they would come by the event at some point, although I wasn’t sure when. 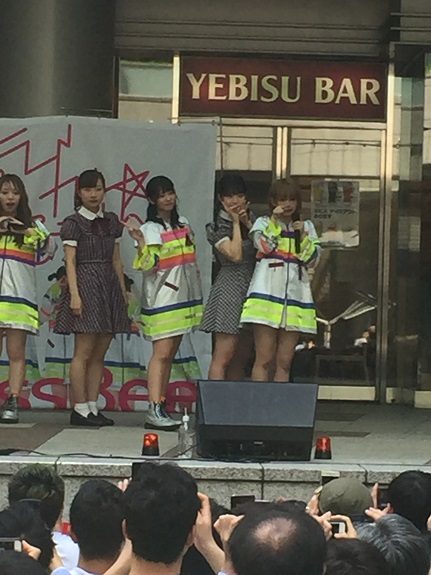 I arrived at the venue a little early, but there were already tons of fans lined up in the various queues; purchasing CDs, getting handshake tickets, and whatnot.  I had found it odd when I saw the group on Tuesday that they didn’t seem to be doing any preorder for the new single, and it seemed the same this time around as well.  That was until I took a good look, and noticed that you could preorder the new release, but it had to be done via a QR code.

Wow, I had never seen this method before, but apparently it is now how Tower Records does preordering.  I decided to try it, and it was actually relatively easy.  You scan the code, and it brings up an email dialog box.  You simply click send, then get an email back with the link to order the CD.  Once you are done you show your new QR code to the staff who scan it and take your money.  Then you get a confirmation email which you use to pick up your CD’s when the release comes out. 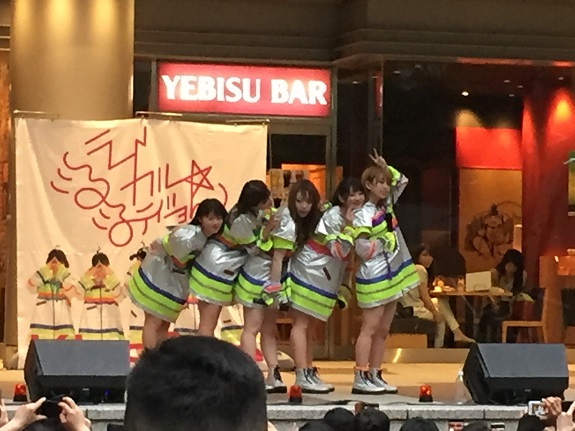 The show was about to begin, and I hadn’t seen my friends yet, so I decided to hang toward the back so I would be easy to spot if they showed up in the middle.  Kiss Bee came out to do their rehearsal, singing Maho Nanka Yori Fantasy, which is one of my favorites.  The funniest thing was watching the reactions of the people in the restaurant behind the stage.  They got totally into the performance, mimicking the hand motions.  It was really funny.  After that Kiss Bee Youth took the stage for one song.  Interestingly, I have never gotten into Kiss Bee’s kenkyuusei group, or their Kansai group.  However, the youth group seems to be the main feeding ground for Kiss Bee, as their numerous new members have all come from there.

I noticed that I’m not familiar with a lot of the new sings Kiss Bee sings.  That’s when it dawned on me that I have never listened to their latest album Imaginism, despite having two copies.  I listened to the CD earlier today, and found many of the songs they have been performing this week.  So yeah, you can call it a recommendation, but I really like the mini-album, as well as their previous full-album release, Pop Honeycomb.

They performed a five-song set, and then did their post-show photoshoot and janken for signed posters.  They also did a “Dance Quiz” as part of their emcee, where you had to guess the song from the move.  It was fairly easy.  BTW, I have never won the janken in two years of liking this group, and today was no different.  In fact I lost in the first round both times.  Anyway, after the free high-touch, everyone was trying to figure out how they would do the buppan since there was no way to access the stage from the viewing area.  Eventually they announced that we would be entering from the side, so everyone scrambled to queue up.  I wasn’t too far back in line, although Misaki-chan, my favorite member, always has the longest queue… 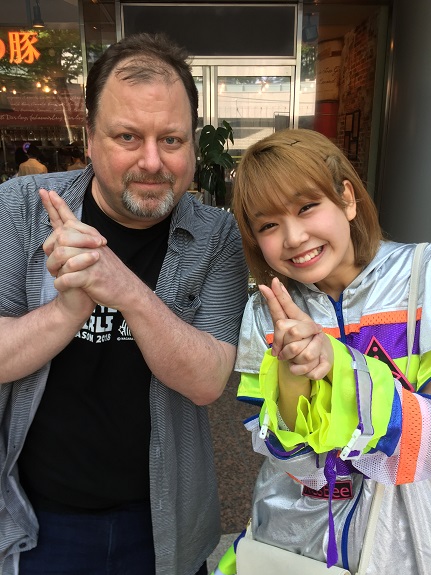 The “hand gun” pose is tribute to one of the dance moves in one of their new songs.  In my brief exchange I told Misaki that I brought a copy of the newspaper article in which I wrote about her.  She was like “Oh great!”  I would try to somehow get it to her later since Kiss Bee doesn’t really have a gift system.  I had also purchased one of the photos for the handshake session, but I would be close to 45 minutes before I would get a chance to use it, since the 2-shot session seemed to go on forever.  It was almost 2:30 when they started handshakes, only an hour before their scheduled second live….

Everyone began moving toward the sides of the stage, with quite a few people taking advantage of the general confusion to cheat their way toward the front, which kind of annoyed me.  But it wasn’t like I needed to be anywhere since I planned to stay for the second live.  Eventually it was my turn… 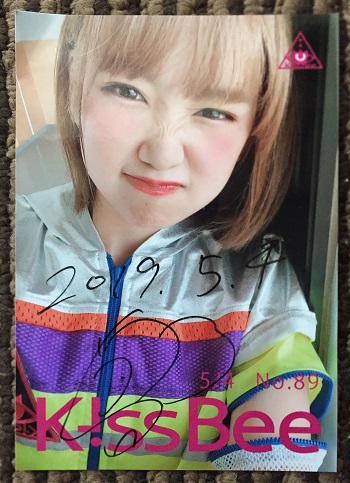 I had the newspaper handy in case one of the managers were nearby, but it had just started to drizzle, coupled with ominous thunder claps, so the staff were scrambling to move goods tables, and cover the speakers in case a good storm came by.  While Misaki-chan was signing the photo I mentioned that I chose that one because of the way she wrinkled her nose.  So she crinkled her nose for me, cute.  I also briefly showed her the article, and told her I would try to give it to one of the managers.

As time went by the lines were not dissipating, and it was almost time for the second live.  Eventually they cut off the line, and told people to save their tickets for the second show.  I only had one ticket left, which I was saving for the later live, so that didn’t affect me.  In the meantime, my friends finally messaged me that they were “on their way.”  Finally!  I was wondering where the heck they were.

My friends arrived just prior to the second show.  It had stopped raining, so we grabbed a table toward the rear of the viewing area, and watched the show from there.  Well, my friend David and I stood in the crowd, but my other friends stayed back.  BTW, David thought the siren lights the girls wear on their heads at the beginning of the show were really funny, although it would be funnier if they were somehow affixed to their outfits instead of the girls having to hold them in place, but they would need some sort of helmet for that. 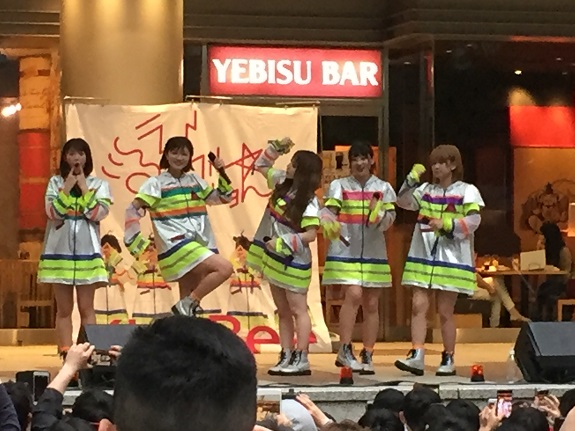 The nice thing about their lives is they don’t repeat songs from the earlier shows, so you get a nice variety when you go for the entire day.  I was trying to gauge how much my friends liked Kiss Bee.  David and Melody were already familiar with them, and this was Anthony’s first time seeing them.  I tried to get them all to participate in the janken, and the high-touch, but only David and I participated.  As we went through the line, I told Misaki-chan that I had brought friends with me, including David, and she reacted “Ooohh!” in a high pitched voice.  It was quite cute.

I figured my friends wouldn’t want to wait around very long, so I immediately started heading toward where the queue would be formed.  Unfortunately, a lot of people had the same idea.  Unfortunately for them, I remembered early how many people cut in front of me for the handshakes.  So what’s good for the goose…I just waded me way around the side and slipped in much closer to the front.  It was only around five minutes before my turn… 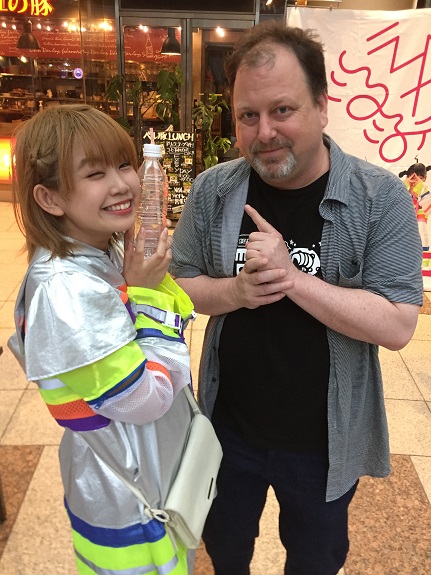 The guy in front of me took 1-shot photos of her posing with the water bottle.  I thought it was cute, so I told her to hang onto it for our pic.  In our brief conversation, I noted my friends who had come to see their performance.  She thanked me for bringing them, and I told her I will see her soon, which in this case is actually true since they have an aggressive free live schedule, so I will surely head out to see them a couple more times before the CD comes out. 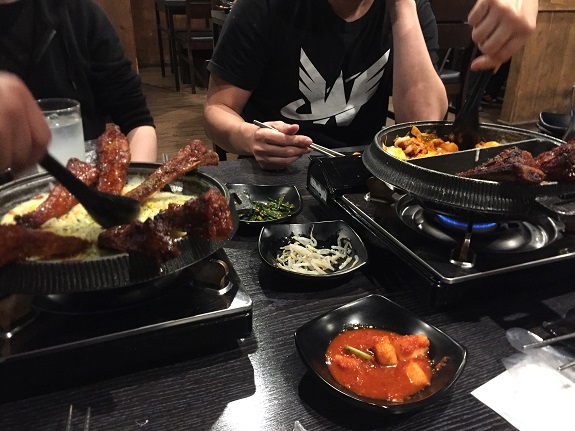 After that my friends and I headed to Nakano; first to Oktoberfest, then to Nakano Broadway where David wanted to try some famous 8-scoop ice cream cone.  After that we headed to Shin Okubo to try that relatively new cheese and meat UFO thing that is so popular, although instead of the chicken version we got the spare ribs.  It was excellent, but I think I would like to try the more traditional version next time.