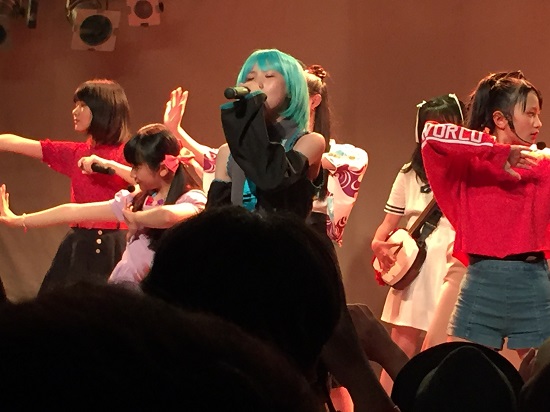 Miyabi (with Minori, Yutori, and Ryo)

After temporarily moving their one-man live to the comparably tiny Yotsuya Lotus in April, Mingaru were back at their traditional location for their May event. I purchased a ticket at Yotsuya mainly to get the buppan tickets (Yes, purchasing a ticket to a future live earns you two tickets) forgetting that AKB48 also had a zenkoku event scheduled on the same day at Makuhari Messe. The good news was that this event only conflicted with the mini-live portion of the AKB event, so my plan was to go see Mingaru, then head off to Makuhari for AKB’s handshake meeting. 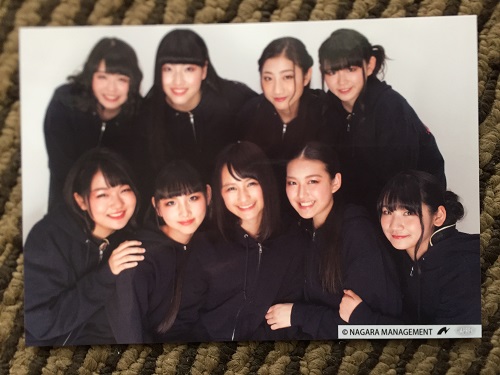 In fact, I also considered skipping on the buppan for this show, which would have possibly allowed me to get to AKB’s mini-live as well. I arrived at Shinjuku Marz a few minutes after doors opened. I had entry #42, and just as I got to the door staff called #41-50. Talk about perfect timing! Upon entering I was given my drink ticket, and the usual monthly photo which also contained a contest drawing ticket. Minyo Girls sometimes give away prizes during their show, but haven’t been doing it as often lately. The queue for goods was not very long, and I noticed they had a new T-shirt on sale. As I mentioned before, I hadn’t planned on purchasing anything for buppan, but I really wanted the T-shirt… 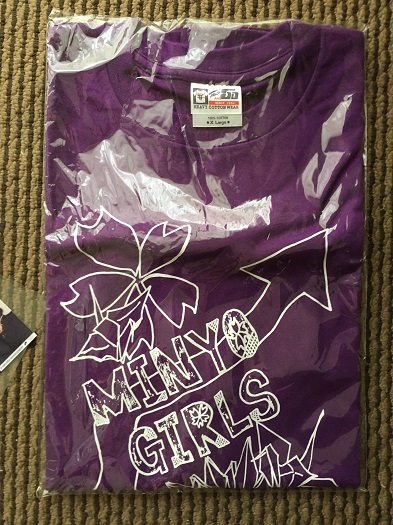 Apparently the design was drawn by Rio-chan. I like last year’s shirt better, but this one is nice too. The shirt was 3000 yen, so I needed to make another 1000 yen goods purchase to get to 4000 yen and earn a second buppan ticket. The choice was either plastic bracelets, or random one-shot chekis. I chose the chekis, and hoped I would get members I liked… 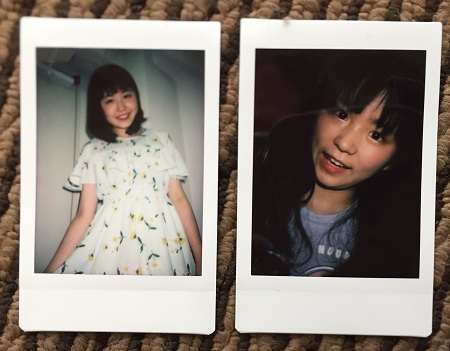 Well whaddya know! Yuua and Ramukyun, both members I like meeting with. Since Minyo Girls don’t really offer 2-shot chekis anymore, fans use these to get autographs during handshakes. So I will save them for a future event. I then picked up my prepaid drink and took a spot in the back of the venue. I was debating moving up a bit closer, and then three guys who are all tall decided to stand literally right in front of me. It was like they were forming a wall preventing me from being able to see. Well that settled it, I moved in front of them to the middle of the standing area. Actually, this was a much better view, especially for taking photos. I don’t know what I was thinking standing so far back. Anyway, was just about show time… 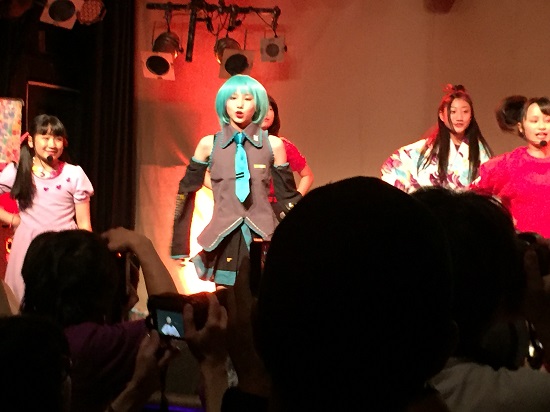 Miyabi (with Yutori, Rio, and Ryo)

It turned out this was one of those shows where the members get to pick and perform any kind of song they like, so when they first came on stage they were dressed in either street clothes, or clothes themed out for their performance. The most noticeable of all of them though was Miyabi-chan, who came out dressed in full Hatsune Miku cosplay. I immediately thought “Well, that settles that. There is no way I am skipping out of here early and missing out on taking a 2-shot with “Hatsune Miyabi!” After a quick introduction, each member came out one by one and did their solo performances…

Ryo-chan- What is Love? (Twice) Dance performance only. Ryo is a good dancer, so this was good.
Yutori- Waterloo (Abba) Yutori sang the entire song in English, so major props for the effort! (She occasionally tweets in English too)
Ramukyun – Kyuushamen (Nogizaka 46) Ramu is a known 48-group wotaku. Seems like she loves Nogi as well.
Rio (Ise Ondo Medley) and Yuua (???)- both sang traditional minyo-style songs, which plays to their strengths. The did an excellent job.
Miyabi- Ghost Rule (Hatsune Miku) Miyabi is quickly becoming a top level singing pro. She was excellent
Rinacchi- Kuroi Shizuku (Superfly) At the time I wasn’t sure which song it was, but Rina did a great job. She’s one of the top singers in this group.
Minori- Yumi Miru Shojo ja Irarenai (Aikawa Nanase) Minori used to mainly do Momoclo songs, but lately she has been branching out. Her singing has improved as well. 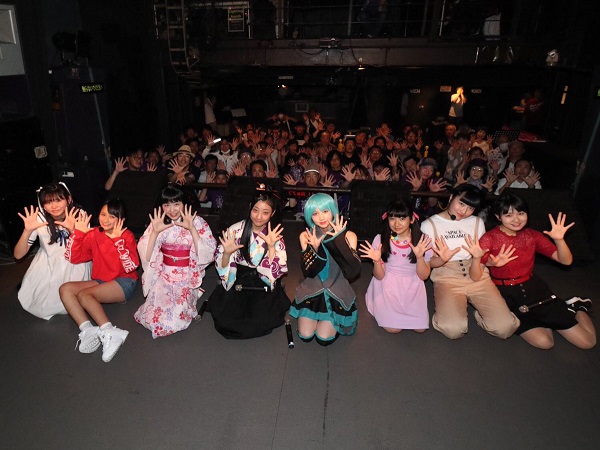 The set was quite long, so afterwards there was a series of giveaways and games, following the usual group photoshoot. (I am further back, so I little bit harder to see) The giveaway were two framed wide-shot chekis of the members, which I of course lost. Then came the batsu game. Their manager wheeled out a covered box. Oh yes, it was everyone’s favorite “Guess what’s in the box by touch” which freaks so many idols out…

Ryo-chan went first, and scared the rest of the girls out when she said the contents were slimy and asked for a towel. However, most of the rest of the members were pretty daring and stuck their hands right in there, with the exception of Ramukyun, who in the spirit of Nishino Miki completely freaked out while putting her hand in, jumping backwards and nearly breaking the entire box. She knocked the side wall off, and nearly spoiled the game if it weren’t for their quick-thinking manager who immediately tossed a towel over the exposed area so the girls couldn’t see. Nevertheless, at least 3-4 of the members declared they knew exactly what the contents were, and when the groups made their guess both correctly answered that it was tapioca. 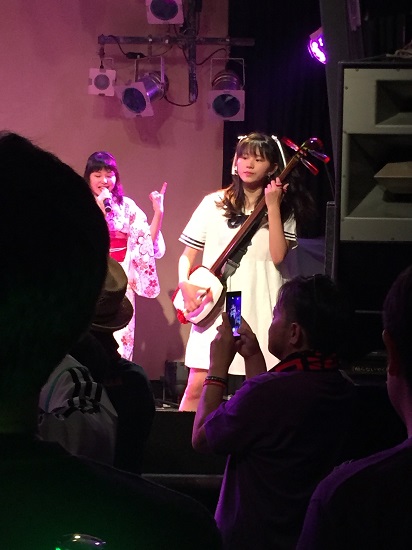 So since it was a tie, the game had to be decided by janken, with Ramukyun going against Yutori. Ramu’s scissors beat Yutori’s paper, so her team won the grand prize, giant lollipops, while the other team had to drink some foul-tasting concoction. Yutori was puckering her lips for at least the next five minutes. The girls sang one more song, which was camera shooting time, and then went to encore.

The encore VTR was mainly a video from Matsuri, who was not at the performance. The rest of the VTR was about next months live, and a special fan meeting being held some time next month. They finished with Mirai and Ureshii Namida. I checked my phone, it was after 1 p.m. I think this was the longest one-man live they have ever done! Buppan or not, there was no way I would make the AKB mini-live now. Oh well…

I had two tickets, and decided to forego a group shot and take shamekai with two members. I would definitely meet Miyabi since 1) I always do and 2) I wanted a 2-shot with her in her cosplay. As for the other, I decided to choose Yuua over Ramukyun since I hadn’t taken a photo with her lately, and she is always very nice. It’s too bad, though since I would have loved to tell Ramu that I was heading to see AKB afterwards. After the group shots ended, both Yuua and Miyabi were in the first group for shamekai. Miyabi’s line immediately became long, so i went immediately to Yuua, and was first in line. 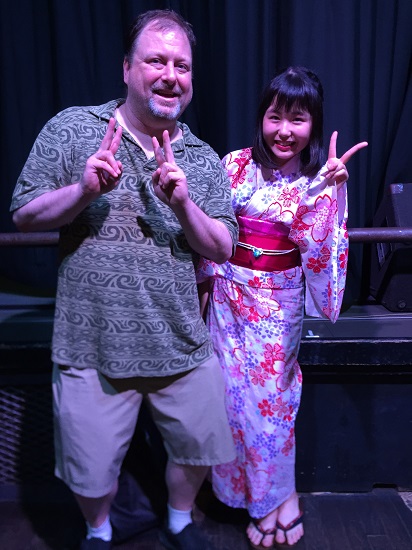 In my brief interaction, I told her that she did a great job with her song, and that she always sings very well. She cheerily thanked me, as usual. I then went to Miyabi’s queue, which was quite long. I think all the fans wanted to get a photo of her in that outfit. I wa only in line 5-10 minutes or so before it was my turn… 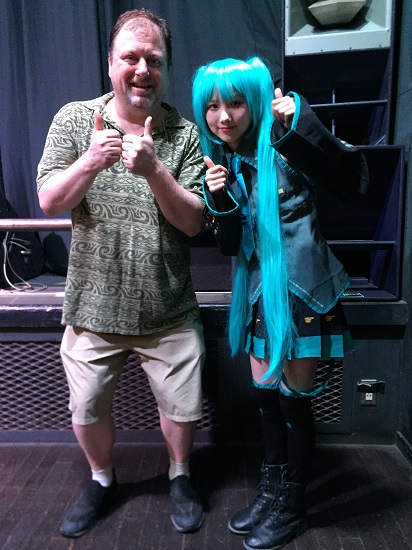 Awesome! She asked me what I thought of her cosplay. I told her it was perfect, and that I am a Miku fan myself. What I also find interesting is that in that cosplay the shape of Miyabi’s face completely changes. She’s very thin, although she isn’t very tall, giving her face a narrow look. But in this outfit her face looked much wider, and her cheekbones more pronounced. Ultimately I thought she looked really cute.

So that was it for me, I headed out of the venue and back to Shinjuku Station. It would take me close to an hour to get to Makuhari Messe, although I wasn’t in that big of a hurry since I would be arriving during the break between the live and handshakes. I already did a report on that event, which you can read about here.