2 1/2 weeks after it’s official release day, Wasamin was finally doing a promotional event for the DVD/Blu-Ray release of her 2019 Tokyo Kinema Club concert. Now obviously I could’ve gone out and purchased it a couple weeks ago, but that became more difficult to justify when I knew that there would be bonuses and handshake tickets with my purchase if I just waited for the event. After all, it’s not like I had never seen the show before. I saw it live. So despite really wanting to watch the concert again, I patiently waited for this day to come.

I headed out extra early since I knew I had a bit of a trek to get out to Yukarigaoka, which is on the outskirts of Sakura City in Chiba, not too far from Narita International Airport. There is also a bit of a walk from the station to the mall. Not too far, just under a kilometer. I arrived around 90 minutes before the event was scheduled to begin, thinking perhaps I could score a seat for the live. To my surprise, all the seats were reserved. I instead decided to roam around the mall. It’s a pretty big place, divided into two multi-story buildings, with a bridge that attaches each side. I first walked over to the West side, thinking I could take the time to get a haircut. But the line was really long. I headed back to the East side where Wasamin’s live was taking place, and I noticed there was already a queue forming to purchase CDs and DVDs. There was a special offer of a concert poster with each DVD or Blu-Ray purchase, and the promotion mentioned a limited supply. So I think everyone was trying to make their purchases early to ensure receipt of a poster. Although ultimately that wasn’t an issue, as they announced toward the end of the second event that there were still posters available.

Anyway, I got my DVD, Blue-Ray, and two posters, and had 40 minutes to figure out what to do about lunch. There was a hamburg steak place directly behind the venue that looked really good, and the line didn’t seem that long, but they moved at a snail’s pace, and all of a sudden it was 25 minutes before the show. I crossed out my name and headed back to the stage. I would worry about lunch later.

I came around the corner, and whoa, the crowd was HUGE! It had been a long time since I had seen such a big gathering for one of Wasamin’s events. I found a standing spot on the right that wasn’t too far back, and had a clear view of the stage. A few minutes later Wasamin came out for her first of two events.

Despite being out in the burbs, this is a lively mall. I think Wasamin was really excited about the big and enthusiastic turn out. She spent a bit of time talking about Chiba Prefecture being her hometown. In fact, she had mentioned once before when she performed here previously that when she was younger her mom occasionally took her shopping there. I also noticed that the staff was really diligent with making sure nobody was taking photos. I mean they always have a “no-photo” policy, but usually you see lots of people taking pictures anyway. This time they had three staff roaming the area, and I never saw anyone getting away with a free shot. In any case, the queue for buppan quickly formed after the live. I knew the line would be long, so I jumped into it as quickly as I could. It was less than ten minutes until my turn. 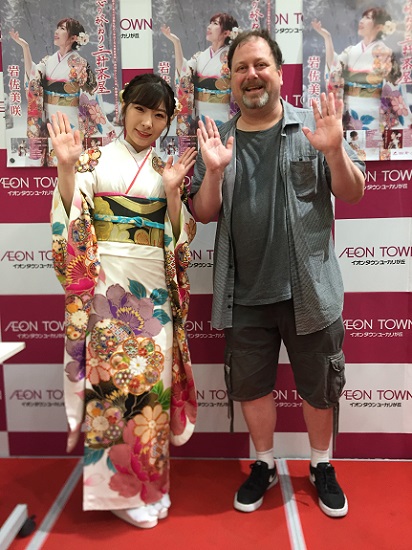 Wasamin started by thanking me for coming to the BIG ECHO event on Saturday. I thanked her as well, telling her that I was so happy to sing with her again. I went on to say it had always been my dream to sing together with her, and now I had done it twice. She put her hand over heart. I also mentioned that I wrote about it on my blog and twitter, and that a lot of overseas fans said that they would love to sing together with her too. She was really happy to hear that. In the meantime, my turn was over, I decided to scout for lunch.

I went back to the Hamburg Steak restaurant since you could smell their garlic rolls from 30 yards away, and I really wanted to try them. Again, they were very slow, but I endured the wait, and the food was really good. Afterwards I went back to QB House to see if the haircut line had gotten shorter. NOPE! So after roaming around the mall in an futile attempt to find a poster tube, a found a row of massage chairs upstairs. 200 yen for 15 minutes. It was awesome, definitely the best massage chair I had ever used. It even gave me a foot massage. I would have gone for another 15 minutes, but it was almost time for Wasamin’s second show. The crowd was big, although not quite as big as the earlier show.

Wasamin was a few minutes late coming out for some reason. The record shop staff were scrambling around wondering where she was. But eventually she showed up. This was the first time in a long time that Wasamin has performed Kikyou, the old AKB48 song she covered on her first single. I’m not sure why she chose to pull that one out of her repertoire, but it is probably good that she sings some of those old songs once in a while, lest she gets rusty on them. It was interesting that Wasamin seemed to be emphasizing the promotion of her 8th single all day, and the DVD was like an afterthought. My guess is when she is trying to court the people there that aren’t necessarily her core fans, it is easier to sell them on making a 1000 yen purchase than a 5000 yen purchase. Although I did see a few locals make concert purchases too, it seemed like most people, even the regular fans were buying more CDs than DVDs.

This time I decided to wait a little bit before I went to take my 2-shot with Wasamin. I grabbed a drink, sat down for a few minutes, then proceeded to queue up when the line got a bit shorter. Taking a queue from some of the fans in the first event, I decided to show off my purchases in the photo… 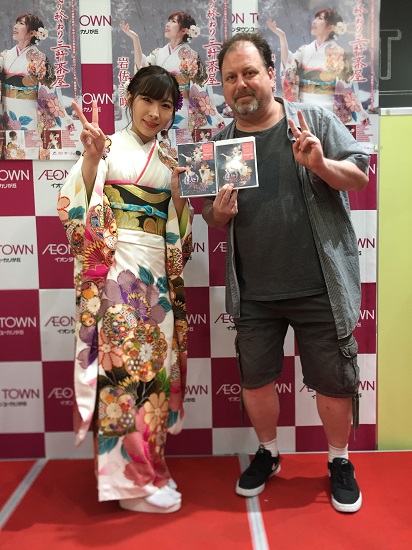 BTW, there are a lot of cute pics of Wasamin on the DVD box and inside the booklet, but there is a really great picture of her on the back of the DVD. I pointed it out to her, and she emphatically stated that she also really likes the photo. After that I pointed out to her that if you look closely I can be seen in the photo below it. Wasamin grabbed it, looked, and started laughing. “It is you!” as she started showing to Ichikawa-san (Wasa-manager) All the while the staff running the event was trying to push me away, except Wasamin still had my DVD in her hand, LOL.

I was debating staying a little while longer, even getting another one of those massages, but then I decided to head over to Hibiya since my IQOS has been acting up, and they had a deal on the new version at the Hibiya Beer Garden Event. I got over there around 6 P.M., made my purchase, and grabbed a pint before heading back home to watch the concert. 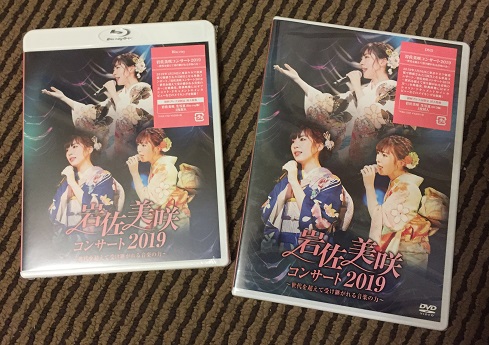 Well, maybe not so much a review. More like a few observations in comparison to my first impressions when I saw it live. After all, you can read my original review on this blog back in January. Here are a few things I noticed…

1. If you read my original review, I mentioned that she screwed up the first MC, and stated that they would probably clean it up on the DVD. I hoped they wouldn’t, but they did. The screw up is gone. (They also cleaned up the VTR that played before the encore, smoothing out the transitions)

2. On the other hand, they left in the part where Wasamin wasn’t ready to come out to talk to Hiyoshi-san and Kanade-chan from Hiruson. Not only that, on the making-of featurette at the end of the disc, they show what was going on backstage at the time. It is pretty funny. Also, they seemed to edit the interactions during this MC to make it seem a little less stilted, although there are still a few awkward moments.

3. For some reason they completely cut the Zard song out of the video. I’m not sure why. Perhaps a licensing issue? It is an awkward edit too, like you can tell something was cut out. She is finishing up an MC, and then it cuts to her bowing at the end of an unknown song.

4. You can see me periodically on the DVD, but never so much as the MC and performance of the song Neraiuchi. If you read my original review, I mentioned at the time that I was aware that the camera was probably on me, and began panicking over how to react. The camera is on me for a significant time, and I look like I am confused as to where I should be looking. (I was!) However, the cameras cut back to me after the song started and you can see me pumping my fist and sorta bouncing with the song. I mean there are moments on all five of her concert DVDs where I can be seen, but this was by far the longest the camera was directly on me in one shot.

5. After watching all of the performances, I still say that Wasamin’s version of Fuyu no Riviera was sensational, better than the original, and definitely my favorite song of the night.

6. However, as for Rouge no Dengon; I like it, but it didn’t have quite the same impact for me on the DVD that it did live. On the other hand, the song after that, Genki wo Dashite, was amazing. So I will amend my ranking to declare that my other favorite performance. I was also impressed with her performance of Ryoushu.

7. There are limited camera angles, so for the most part the camera is focused on Wasamin in various angled closeups, then cut to overhead shots of the crowd. The exception to that was the camera shooting time, where they had various cameras on the floor following her around.

8. The “making-of” feature is around 15-minutes long, and shows a bit of the rehearsal.  It is interesting to see her being coached on choreography, as well as how she practices the photo-op part.  The end of the feature shows quite a bit of the post-show ‘ichigo seat’ event, where she did a toast, answered a few questions, and greeted all of us.

Overall it is a really nice DVD. Needless to say I highly recommend it.

Anyway, next up for me and Wasamin, her Koi no Owari Sangenjaya party at the end of the month. She has a bunch of appearances out of town over the next couple weeks, so I doubt I will be making any of those journeys. But you never know, I may make a special trip somewhere if I get in the mood.