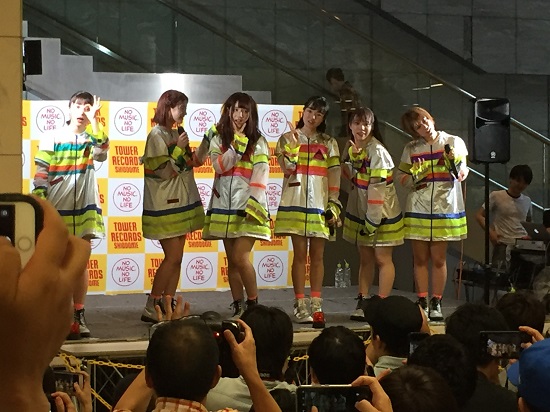 When Kiss Bee released their new single last month, I was surprised they had only scheduled one release event in Tokyo for the entire week.  Moreover, it was a weeknight event, the girls heading up to Sendai to promote the single on the final weekend.  So I was glad when I checked their schedule and saw a few more Tokyo Metropolitan Area events, including this one in Central Tokyo.  Now I already have plenty of copies of their new single, but I am always up for paying a visit with my favorite Kiss Bee member, Tanifuji Misaki (Misaki-chan)  So I figured it would be a nice way to spend an afternoon, except…

I woke up in the morning to cloudy skies and wet conditions.  The forecast was for periodic showers throughout the day, with the main storm passing through from the late-morning until the early afternoon.  I don’t know what it is, but it seems like every time I go to see Kiss Bee this year a rain storm comes to Tokyo.  I have seen them five times in 2019, and four of those five were in the rain for at least part of the event.  One of the events was even rained out.  This live event (as well as their event tomorrow) was schedule to be outside.  However, their official site mentioned there was a contingency plan in case of adverse weather.

Part of the issue for me wasn’t necessarily the live itself, but getting there.  It was pouring rain in my neighborhood, and I had a considerable walk from Uchisaiwaicho Station in Shimbashi to Caretta Plaza.  I ultimately decided that since the rain was supposed to taper off in the afternoon, I would skip the first live and just show up for the last one.  However, as it became later in the day the rain wasn’t letting up.  I couldn’t wait any longer, so I grabbed an umbrella and headed out.

I arrived on the opposite side of Shimbashi, and luckily the rain seemed to have stopped.  I walked toward Shiodome, grabbing lunch along the way.  I wasn’t sure where the performance was taking place, although I had a general idea.  I kept walking in the general direction of where I thought the plaza might be, and when I came across the Tower Mini location that was hosting the event, I knew I was close.  Eventually I found the plaza where the event was originally supposed to be, and after searching around for a few minutes I found where they had moved it.  They were still doing buppan for the first event, so I retreated into the restaurant floor of a neighboring building, grabbed a large iced coffee, and vegged out for a while, returning shortly before the 2nd live.

Upon returning to the live, I noticed the main viewing area was pretty much filled up all the way back to the camera bay, as was the area to the right of the stage.  After buying one CD for one shamekai ticket, I decided to go to the far left side to see if I could find a decent vantage point, taking a place behind the ladies’ section.  I was fairly far away, but I had an unobstructed view.  Eventually the members came out in the outfits from the new single, complete with the emergency lights on their heads.  One would think that by now they would come up with a way for the members to attach those things to their heads without having to hold them, but oh well.  As it has been with all the Kiss Bee lives I have attended in the past two months, the setlist mainly consisted of songs from the new single, and from their last mini-album.  However, they also performed Mahou Nanka Yori Fantasy, which is the song that made me fall in love with this group in the first place.  I have a feeling a lot of people feel that way, and it is the one song from their older releases that seems to get performed at almost every live. 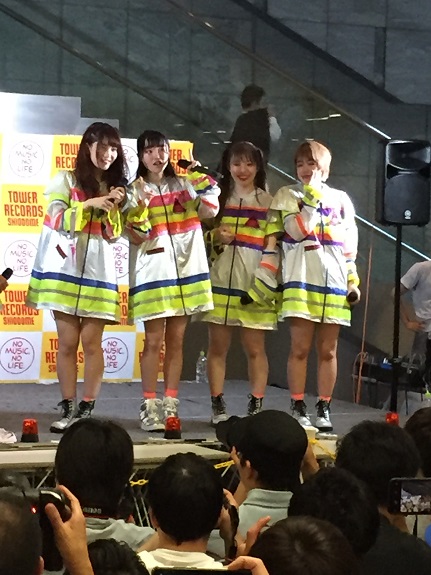 There were also a few really rowdy wakkai wota at the show.  I mentioned this before, and it is a similar dynamic I experienced with FESTIVE, but there seems to be a point in the evolution of idol groups where the main fan demographic switches from older wota to younger wota.  Come to think of it, I also experienced this with AKB48.  A lot of the older otaku I used to see at Kiss Bee shows seem to be gone, and they have been replaced by a younger demographic.  There were also quite a few young girls, and children in the audience, which is a promising sign.  So there’s that.  The other interesting thing about this live was the escalator to the restaurants right behind the stage.  It is always funny to watch the reactions of people who are accidentally running across the live, you can tell many of them are absolutely fascinated by the entire experience.  I see this a lot at Wasamin events too. 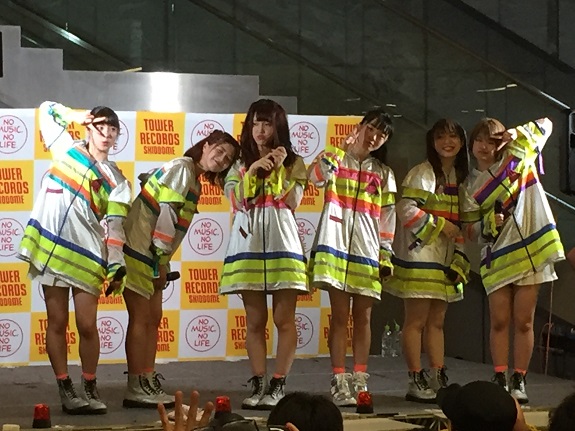 After the five song setlist, I again lost the janken competition for a signed poster.  As for the photo-op portion of the event, I was fairly far away, and there was a spotlight shining directly on Misaki-chan’s face, but I still managed to get a few halfway decent shots.   After that the members left the stage, and we queued up for the free high-touch.  However, the members went missing for about fifteen minutes, so we were waiting for quite a while before they returned.  Of course the high-touch is quick, but I got an enthusiastic ‘English hello” from Nonoka, one of the newer members.  And of course Misaki-chan exclaimed “Ahhh Kurisu!” as I passed.  I was thirsty, so I headed back into the plaza building for a few minutes before coming back out for 2-shots.  Luckily for me, the line for Misaki-chan wasn’t very long.  She asked me what pose I wanted, and I suggested…. 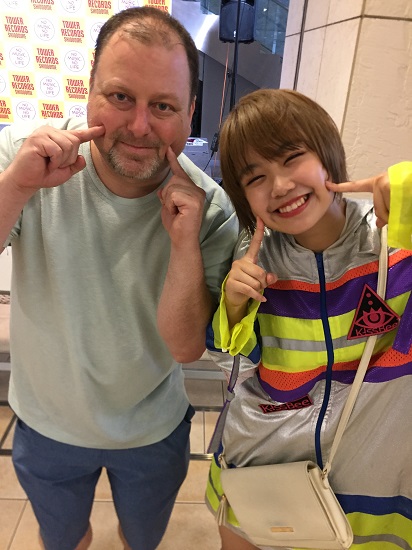 Cute.  You don’t get much time to talk during the 2-shots, but Misaki mentioned to me that she knows I love the “chupa chupa” song, and she sees me pointing at her every time.  (During the chorus, the lyrics alternate between “love me” and “kiss me” and you are supposed to point to the person you are addressing, and then point to your cheek.  Of course, I always point at her)  I just nodded and said “Yep!”  I mean I could’ve picked up another ticket to continue the conversation, but it was fine.  She knows I like her, LOL.

Since I had no more tickets, I decided to head back in the direction of Shimbashi Station, but as I was walking back I noticed we were right next to the Nihon TV building.  Not only that, it is the same building with that crazy clock you can see if you ride on the Yurikamome Line out of Shimbashi toward Odaiba.  I decided t walk over there, take a closer look at the clock, and take a few photos for good measure.  It is an amazing looking structure, something you would expect to see at Disneyland. 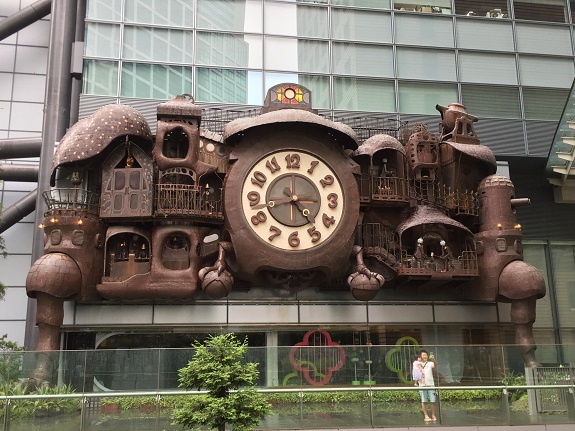 Kiss Bee has another mini-live in Kichijoji on Sunday.  I could go, but at this point I was planning on seeing Minyo Girls in Yokohama.  That show is relatively early though, so technically I could do both if I wanted.  I’ll play it by ear.