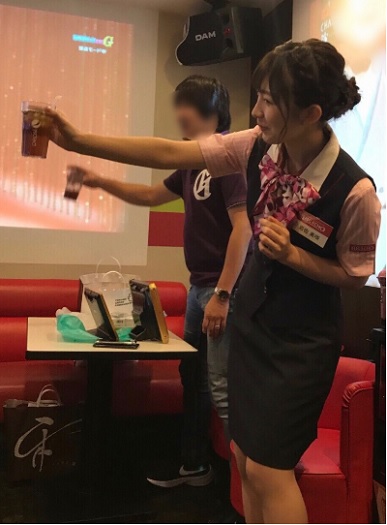 I remember when I first started coming to Japan and buying CDs. Often I would find these postcards inserted in the singles, but I never quite knew what they were. Eventually I learned that they are applications to win special prizes, or go to special events as a reward for purchasing the single. Wasamin has been doing this with all of her music releases, as well as her first couple DVD releases. The top prizes being special trips and events, as well as secondary prizes like personally signed posters. I have sent in applications for all the release prizes since I moved to Tokyo, winning the first or second prize each time. You might remember the BBQ party I attended a few years ago where Wasamin served me lunch, or the Karaoke party last year when I sang a duet with her for the first time. For Wasamin’s 8th single the top prize was a “Sangenjaya Party,” which was slightly mysterious aside from it most likely taking place in the Sangenjaya neighborhood. The second prize, as always, was the karaoke party. Per usual, I put most of my applications in for the grand prize (you have to specify which prize you are applying for) and then a handful of applications for the 2nd prize, just in case. I received a postcard a couple months later, I won the grand prize. Score-a-rooni!

In the meantime, if you have been reading this blog, I mentioned in a previous post that there is a special “Wasamin Club Room” at the BIG ECHO karaoke box in Sangenjaya, the same location that gets considerable screen time on her 8th single MV. You may also be aware that I went to a special karaoke event at this same location a couple weeks ago, where I sang a duet with her for the second time. Wasamin has been doing a lot of work with Live Dam/Dam Channel lately, so she has a close association with the karaoke world as well as BIG ECHO. In any case, this was the second time in two weeks that I would be attending a party hosted by her, and I was looking forward to it. 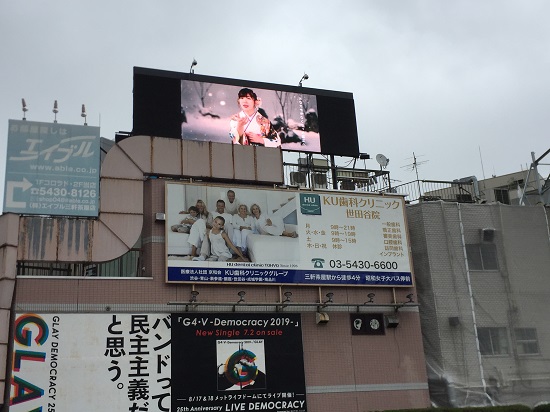 Wasamin commanding the attention of the downtown crowd

I arrived in Sangenjaya around 3 p.m. I was part of the second group that won this event. There were a total of 20 winners, 10 for each event. I was hanging out across the street when I heard Koi no Owari Sangenjaya playing nearby. I may have forgotten to mention this two weeks ago, but they are promoting the song on the big screen overlooking the main intersection, and you can hear it from a block away. I quickly took a shot of the screen before running into Caster, another Wasafan who had also won the second event. We went to line up outside the building, thankfully it wasn’t raining at the moment as was forecast. Eventually one of the other fans came out of BIG ECHO; “Hey, you guys can come in. They are wondering where everyone is!” LOL. We went up to the second floor, checked in, and were directed to a large karaoke room. Unfortunately this wasn’t the special Wasamin room. When am I going to see it??? 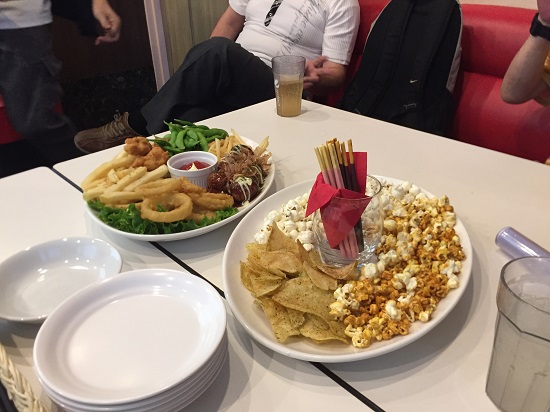 After grabbing our drinks, they set out another tray of popcorn, pocky, and nori-shio potato chips, just like the last event. However, a few minutes later they returned with a spread of karaage, takoyaki, onion rings, fried potatoes, and edamame. Now this was more like it! Sasou-san, Wasamin’s assistant, told us that we better be ready to sing because we will be performing even more than Wasamin will. Okaaaaaay! A few minutes later he asked if we were ready to go, and in she came. 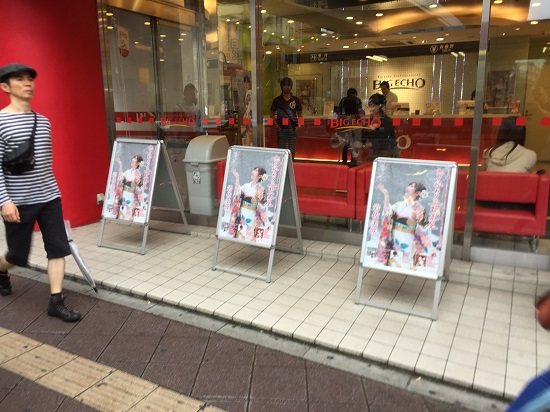 Wasamin, once again dressed in her BIG ECHO arubaito uniform, asked us if we were all genki, and if we were enjoying the snacks, and then led off by performing Koi no Owari Sangenjaya and Matsuda Seiko’s Aoi Sangosho. She was laughing at a few points since we were cheering the same way we would at one of her events, and in that closed space it was very loud. I was busy paying attention to the karaoke screen, practicing my reading and singing in case I would be performing later on. After that she asked who wants to sing, and about half of us raised our hands. Shim-san went first, and afterwards nobody raised their hand, so I offered to go. Wasamin looked surprised; “Honto?” Sure, I don’t mind singing karaoke. I confirmed with her that I would be singing alone, and then I asked her if it had to be a Japanese song. At first she said “yes, one verse and chorus,” but then said “You can do a foreign song if you want.” But I had already decided what I wanted to do. So I said “How about Man With a Mission?” She was like “Sure!” So I requested Fly Again. (Wasamin is an MWAM fan, and she likes that song) She had to help Sasou-san search for it in the menu, but eventually they found it…. 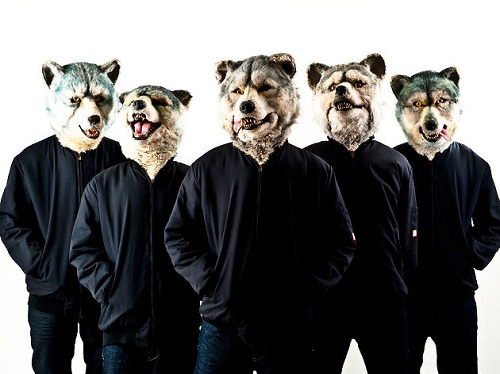 Man With a Mission

Now usually in these situations the people singing can be a bit timid, so they turn the mic up. However, I am not new to karaoke. Moreover, I know how to project from my years as a radio broadcaster. So when I started to sing (actually that song is more of a rap, and it’s in English) they were like “Whoah, loud!!!” I was doing my best Tokyo Tanaka impression, belting out the song and trying to sound cool. Actually, I have done this song at karaoke before, and the main problem with it is the chorus is the same line over and over and over again, so I was glad I only had to do one verse. At the end, Wasamin was like “Wow that was great!” As a prize for singing we got three special “Wasamin senbei” crackers. However she felt my performance deserved four. (By the end of the event I had six!) Most everyone sang, at one point a fan chose the AKB48 Overture as his karaoke song, although there were no lyrics on the screen. So Wasamin started laughing when all of a sudden I belted out “a live like you’ve never seen before!” In fact, I ended up carrying the guy’s entire song. Meanwhile, staff was refilling our drinks so we didn’t have to go to the drink bar and miss anything. However, Wasamin had a little surprise in store for us, a batsu game!

My Wasa-senbei. I ultimately received six of them

Well, it was more like a reverse batsu game. Staff brought in two trays of fresh takoyaki, one for each of us. However, one on each plate was super spicy, and whoever ate the spicy one would get to do an entire duet with her. Now I LOVE spicy food, and was sure that I wouldn’t be phased by one spicy takoyaki ball, so I hoped that I lost. (won) The first group went, and after a few moments one fan grabbed his mouth. We have a winner! I was in the second group. Ready, Set…I put it in my mouth hoping for a spicy sensation. I didn’t detect any excess spice, however nobody else was reacting. Could it be that I’m just not phased by it? Eventually Hide-san, who has been an AKB fan since the very early days, raised his hand. Lucky him! 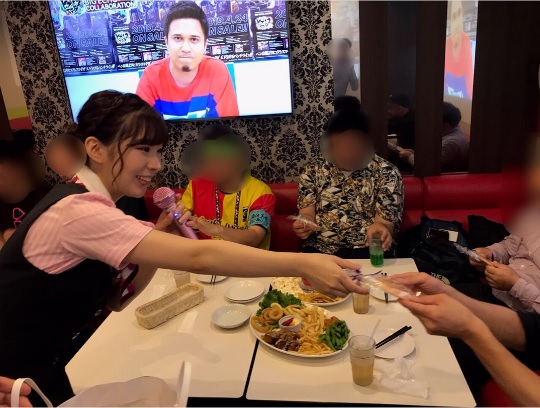 I’m the blur right behind her head

So the two of them got to sing duets with Wasamin. But like the last event, we would all get to share a duet with her, singing Saba Kaido. I was sixth, and got the end of the second verse and the chorus. So you can chalk that up as my third time singing together with her. It’s like a dream come true. Anyway, for the final song Wasamin would be singing something by request, and the person getting to choose was decided by janken. I got through the first round, but lost in the second. Eventually Caster, who is a big 48/46 group fan, won. His first request was a Nogizaka46 song, but she was like “Pfft, I’m not doing that!” LOL. Then he requested Zutto Zutto, the old Team A stage song. Wasamin seemed relieved when it wasn’t in the catalog. Undaunted, his third choice was Lucky Seven, the old c/w track from the Heavy Rotation single. Actually, Wasamin has performed that song before, and is even on the MV. So she was like “Well, okay.” She did a great job with it, and even remembered the dance and hand motions. That ended the show. Wasamin excused herself to the next room, where we would meet her individually for a handshake and 2-shot. We were also informed that the room we were meeting in was indeed the “Wasamin Club Room,” so I would get a chance to see it for the first time.

I walked into the room wanting a chance to check out the decor. Wasamin engaged me immediately. “Kurisu, your Fly Again was perfect!” I don’t know about that, but I told her that I had sang it in karaoke before, so I was familiar with it. I was busy commenting on the various photos of her around the room. Eventually we sat down to take a 2-shot. We could do a shamekai or a cheki, I chose shamekai since I wanted the room clear in the background. 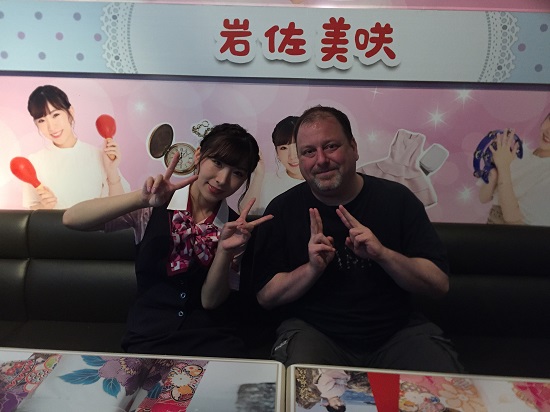 I went on to tell her that I have watched her concert DVD many times, and my favorite performance is Fuyu no Riviera. It is the best version, I said. She thanked me as Sasou-san handed me back my phone. I went back into the karaoke room and waited for everyone else to finish. After we were all done Wasamin returned, thanked us again, and confirmed we all had a good time. Of course we did, we got to spend 90 minutes with her in a little room, How cool is that!?!? After that she left. I think she needed to catch a shinkansen since she is performing in Hiroshima tomorrow.

We gathered our things and left, meeting a few of the people from the first event who were waiting outside. We then proceeded to a nearby izakaya for a post-event celebration. While we had dinner and drinks, Shim-san made a reservation for the Wasamin Club Room next week, and invited me to come along. So it looks like I will be getting the chance to hang out in that room after all! In meantime, she has two events scheduled in Chiba and Ibaraki next weekend. I am definitely planning on going to Chiba. As for Ibaraki, we’ll see. I saw her at that mall once before, and it’s a real pain in the ass to get to. Then again, I have gone through greater hardships than that to see Wasamin, so maybe.