Since Wasamin has been extremely busy with television appearances and other professional commitments, she hasn’t been doing quite as many mini-live events as in previous years. Moreover, it seems like she is doing fewer and fewer events in Tokyo, most of her Kanto events taking place in Chiba, Saitama, and Kanagawa prefectures. She had one event scheduled for this weekend, however it was all the way out in Shimotsuma, Ibaraki prefecture. I had been to the mall out in Shimotsuma once before, and it is a royal pain in the ass to get to. It takes over two hours, and 4-5 trains to get there. Not to mention the 2100 yen fare each way. And that’s just to get to the station. It is such a rural area, and there are no taxis or buses. So you either need to arrange a ride, or walk the 3+ kilometers to the mall. Needless to say, many of her fans skip her appearances there. 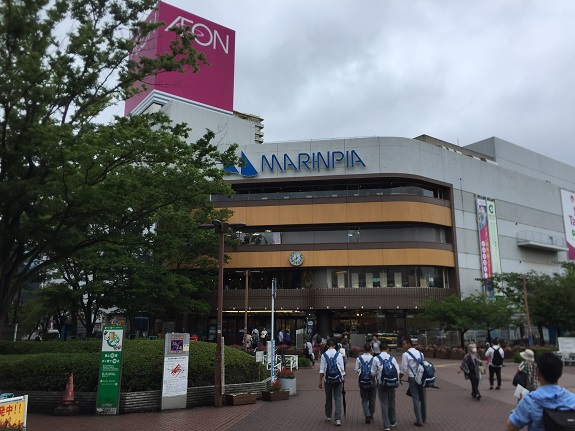 Marinpia is another story. It is located right next to the JR Keiyo Line station, just two stops beyond Makuhari Messe, so it is pretty much the same as going to an AKB handshake event. I headed out extra early since I didn’t remember ever going to this mall before, and I wanted to make sure I found it okay. Plus, I wanted to have time to eat lunch before the event. I arrived around 90 minutes before the first event, and the moment I stepped out of the station I realized I indeed had seen a Wasamin event here before. I have been to so many I have forgotten which malls I have been to, LOL. Anyway, I grabbed some lunch before heading up to the top floor where the event was taking place.

The event space is part of a fairly large Shinseido/book store, which is sandwiched between the food court and a game arcade. There were flags throughout the floor promoting Wasamin’s appearance. As expected, all the seats were taken, so I grabbed a standing spot just beyond the seats in the center, donning my Wasamin Happi coat which I had remembered to bring for a change. The MC led us in a Wasamin call before she took the stage. Here is the first setlist…

This is one of those malls that keeps the sound somewhat muted, especially since it is right next to a small cafe. But it isn’t too bad, and they don’t restrict us on the Wasamin calls. As expected, Wasamin always makes a big deal out of getting the chance to perform in Chiba Prefecture, since it’s her hometown. Although to be honest Chiba is a pretty big prefecture, and this is not the part of Chiba she is from. But she always brings it up, and she said something about purchasing an “I

Chiba” T-shirt. She also spoke a bit about Uta Navi, the television program she is currently co-hosting. Oh, and as much as I always commend Wasamin on her great singing ability, I also like to point out when she occasionally screws up; her voice cracked really hard on the first chorus on Saba Kaido. Then again, I think hitting the high note in the chorus of that song has always been a challenge for her. 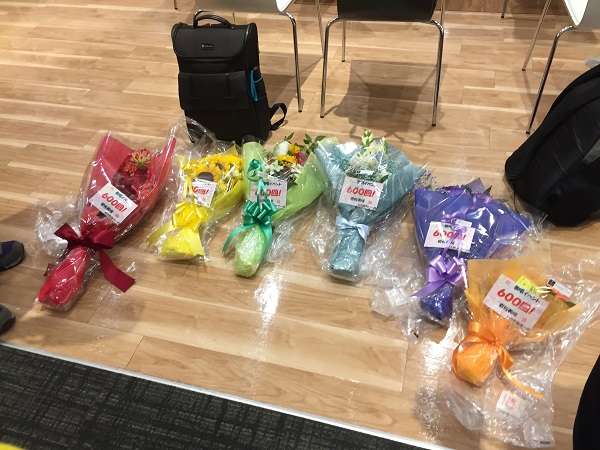 After the event some of the fans showed up with a bunch of multi-colored flower arrangements. Fans (including myself) bring her flowers all the time, but I wondered what the big production was all about. Well, it turned out this was Wasamin’s 600th mini-live event. I’m not sure if that meant event or performance, as she does multiple performances at most events, but Wild-san, one of Wasamin’s long time supporters, keeps detailed notes on every event, as well as which songs she sings. (According to Wild-san, this was her 184th performance of Saba Kaido) At one point they asked me to carry one of the bouquets, but they ended up asking quite a few people, so I let someone else do it. However, I lined up along with everyone carrying flowers, so I was “sort of” in the procession… 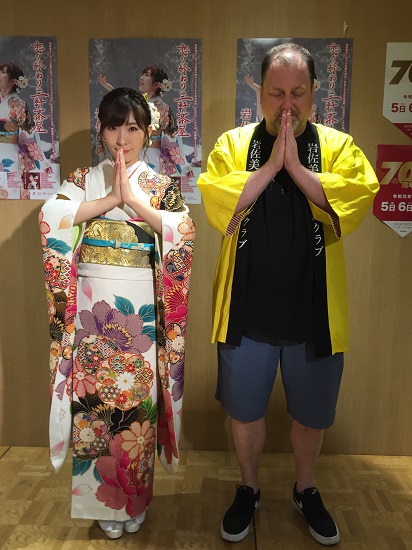 Wasamin asked me why we were doing a “prayer” pose, and I told her that I had not found a full-time job yet and that I was getting worried. I didn’t want to have to return to America. She was like “No, don’t go, stay in Japan!” I told her I was doing my best, and that I have a couple of interviews lined up next week, including one in Kashiwa (which is near where she grew up) Surprisingly, she was familiar with the company. I told her that I would love to live in that area, and she started laughing. I didn’t specifically mention it being where she grew up, but I think she kinda knew what I was getting at. Anyway, after watching all the hoopla over the flowers, I went back downstairs to hang out in the Choco-cro until the next performance. I could’ve reserved a seat before I left, but…whatever. I’m fine with standing.

I returned around 10 minutes before the next event, and grabbed pretty much the same spot as I had for the first show. However, I noticed a bunch of little old ladies standing behind me, so I let them all go in front of me, and went to the very back. I could still see the stage just fine. As for the late setlist…

This was one of the few times where the late crowd seemed slightly larger than the early crowd. Once again, Wasamin spoke at length about her association with Chiba Prefecture, again bringing up her “I

Chiba” T-shirt. She also brought up the fans’ celebration of her 600th event, and she was glad it took place in Chiba. She also thanked everyone for coming out in the rain, but then we all notified her that rain had stopped hours earlier, LOL. Of course Niji wo Wattate is one of the songs that we do a “Wasamin call” throughout the verses, much to the amusement of the local fans in attendance. Afterwards she made reference to us doing the call, which is something she has just started acknowledging recently. This brought up the subject of her nickname, and she was pointing out that it is Wasa-“min” as opposed to Wasa-“bi” which was quite nostalgic for me since I own a Wasamin “Wasabi Power” T-shirt, which is something she designed for B.L.T. when she was an AKB48 kenkyuusei. In fact, I wanted to bring it up, but it slipped my mind when it was my turn to see her… 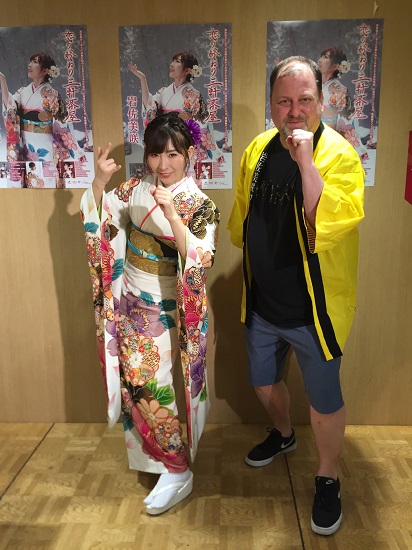 Rock and Roll pose, kinda referencing our interaction at her Sangenjaya Party last weekend. Wasamin stated that she hoped I get my visa all taken care of. I told her that my visa isn’t the issue. In fact I just got my visa extended a few days ago. I said the issue is “Okane” She was like “Oh, money?” “Yes, I need money!!!” I exclaimed in English. She repeated it back to me, as she gets a kick out of me saying things in English like that, especially when she understands. Anyway, those were my two visits. I hung out until the end of the event, kicking back in a chair and playing Wizards Unite.

Interestingly, as she was leaving (and waving to us) one of the regular fans went right up to her to try to shake her hand. In these instances Wasamin usually puts her hand out, which she did. However, Ichikawa-san (Wasa-manager) jumped in-between and blocked the guy off. It was odd because that guy should know better. I half-understand when some random person we have never seen before tries to pull that, but this guy has been to quite a few events, and should be aware of the etiquette. Anyway…

Apparently Wasamin had a free weekend, since next Friday through Sunday is filled with events around the Kanto Region; Tokorozawa and Kumagaya in Saitama Prefecture, as well as Moriya in Ibaraki Prefecture. So lots of opportunities to hang out with Wasamin next weekend. I plan on taking advantage!