Emox4, being a relatively new group, has an intense touring schedule.  They perform throughout the week in the evening, and often have multiple performances on the weekend.  This past Saturday was no different, with three separate performances all in Akihabara.  After a matinee performance at Akihabara Zest, they were the headliners of a two-show, three-group live at Akiba Colors, a venue I saw them at a couple weeks ago.  It’s a tiny place, and makes for a really cozy atmosphere.

I ruled out going to Zest, but figured I would go to one of the later shows, or maybe both.  They were both 800 yen+ two drinks. (2000 yen total) The only other difference was the set times for the late show were five minutes longer.  Ultimately I decided to go to the first show, then go to dinner and home afterwards. 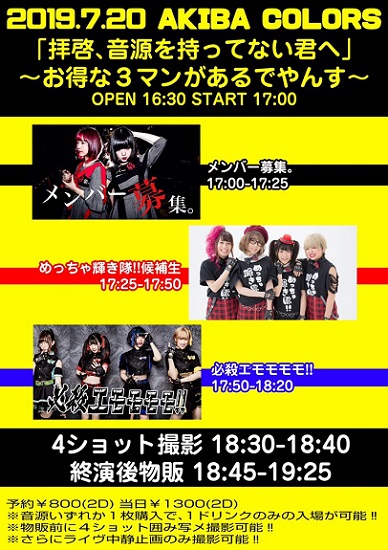 I got off to a late start, leaving my house at around 4:25.  Emox4 would be the last group performing, so I didn’t mind if I was a little late.  As I walked down Showa-Dori toward the venue I noticed a convoy of police buses going into Akihabara.  I would find out a bit later what that was all about.  Approaching the venue, I saw Emox4’s manager walking down the street.  After a quick greeting I headed downstairs, paid my entrance fee, and headed in.  The first group, Menbaa Boshu, I had seen before.  Although this time they were dressed in French Maid outfits.  They have a fairly intense set, and the dark-haired member always seems to look pissed off.  But their songs are really good, so it was an enjoyable set.  By the way, I forgot to mention that there were less than 20 people in the audience, so I was free to roam around the venue.  Not to mention they were allowing photography, so I grabbed a few pics here and there. 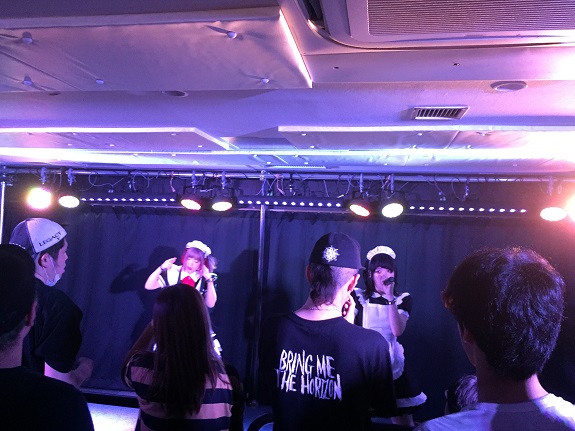 I was checking the bar during the show since I had two drink tickets.  It turned out the group managers were running the entire event, including the bar and the soundboard.  They opened the bar after the first group, and I grabbed a Hi-Ball before the next act, a group I had heard of but never seen before.

Flashing back to Emox4’s one man live last month (where Menbaa Boshu were the opening act) there was a girl passing out her info on a flyer the group she had just joined, Mecha Kagayakitai.  They were the second group on the bill, and as they took the stage I didn’t see the girl I had met.  That said, they were all cute.  The girl with the short, blonde hair kept eyeing me and smiling.  But I was drawn to two other members, especially the short girl with twin-tails and crescent shaped eyes.  She looked like a cross between Ishiwata Sena (AKB48) and Tomonaga Mio (HKT48)  Ironically, her name was also Mio. 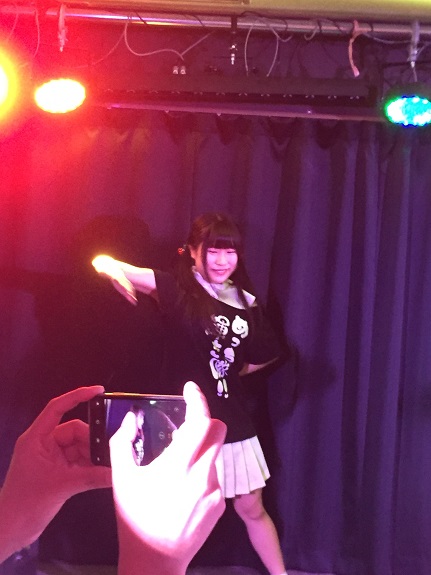 Eventually a fifth member joined them on the stage.  I didn’t recognize her at first, but this was the girl who I had met last month.  As for their sound, all these groups have a similar style.  Their songs are more rock-styled and high energy.  But like Emox4, Kagayakitai’s look is more cute, like they could be a pop-idol group.  They all shared in the solo-singing duties, and they weren’t bad at all. 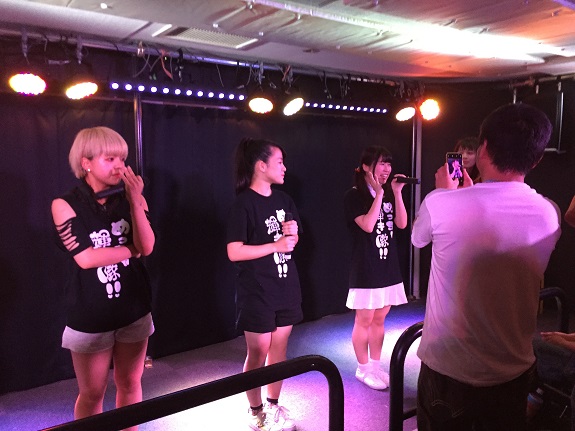 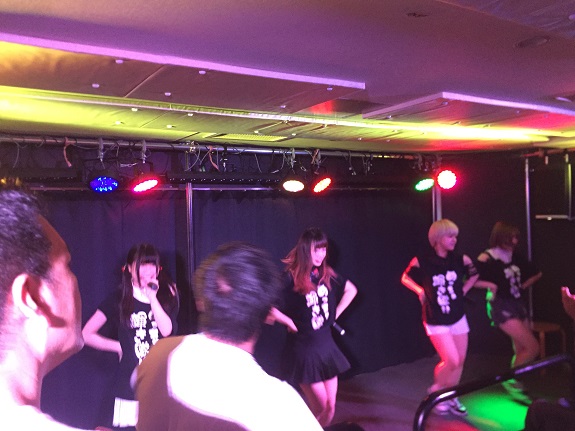 I chose to wait on my second drink, as I wanted my hands free for Emox4’s set.  I positioned myself on the far-left side since I know Minase-chan spends most of her time there, although she started on the opposite side.  Actually, Yuiyui was the first one to come over and acknowledge me.  By the way, I really like Yuiyui, and if I hadn’t already selected Minase as my push member from our meeting in Shibuya, Yuiyui may have become my Emox4 oshi.  Anyway, they did a 5-6 song set, singing their one single at the beginning and end.  I was standing at the railing early on, but eventually got pushed slightly further back.  Undaunted, Minase kept reaching for me to do fist-bumps, high-fives, and to grab my arm.  At one point some of the other fans pushed me back up to the railing.  They performed their big audience participation song toward the end, but since the attendance was small they altered it a bit.  Minase was down on the floor with the fans, and made sure to push me into the action.

The show ended, and I immediately went to the bar for my second drink.  I also grabbed my backpack since it was right where Mecha Kagayakitai were setting up for their buppan.  However, there was another special feature of this show.  As it turned out, everyone in attendance received a four-shot, with one member from each of the groups performing.  It was decision time for me.  I knew I would be picking Minase-chan, and from Menbaa Boshu I like the pink-haired girl, (Chihiro)  But who would I pick from Kagayakitai?  Should I pick Ryoka, who I had met once before, or one of the two I liked during the show? 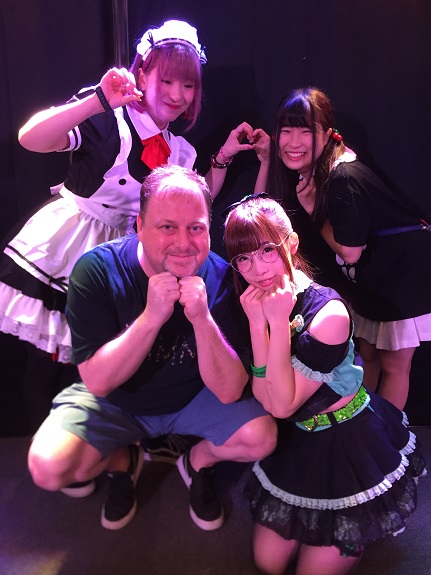 I ultimately picked Mio.  For one, she is really cute, and I also knew her name.  Minase asked everyone to take a burriko photo, as I am not into the S&M poses a lot of people like doing.  I think it came out quite nicely.  But I also had a 2-shot coming since I made a reservation.  That’s another thing I like about Emox4’s shows.  If you make a reservation you not only get a discounted admission, but also a 2-shot cheki.  As the girls were passing out the cheki tickets Minase asked where my point card was.  I explained I didn’t have one, so she immediately made one out for me.  It is personalized too.  Had I known that I would’ve gotten one before.  In any case, I had to wait for Minase to stop working the buppan table before it was my turn for a 2-shot.  This was her idea for a pose… 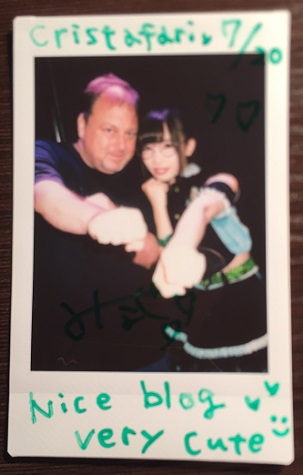 Now if you look at the cheki, you may notice she wrote “Cristafari” on it instead of my name.  It’s the name I use on Twitter, which I know she reads since she occasionally “likes” my tweets.  Then there’s the comment on the bottom.  Yes, Emox4 reads this blog.  At least I know both Minase and Yuiyui do since they both told me.  For most of our meeting Minase was going on and on about how much she likes what I blog and Tweet, and that she looks at it all the time.  I also talked to her a little about my plans for Sunday, and that I would try to make it to one of their shows the following week since I know they have a full schedule.  Oh, and while we were discussing my blog Minase told me she watches Wasamin’s music videos, and thinks she is a great singer.  She knows I am a big Wasamin fan, and has “liked” a few of my Wasa-posts on Twitter.  After that I headed back to Akihabara to look for dinner.  However, going back to Akihabara Station turned out to be more than I bargained for, and the answer to why I saw so many policemen heading into town… 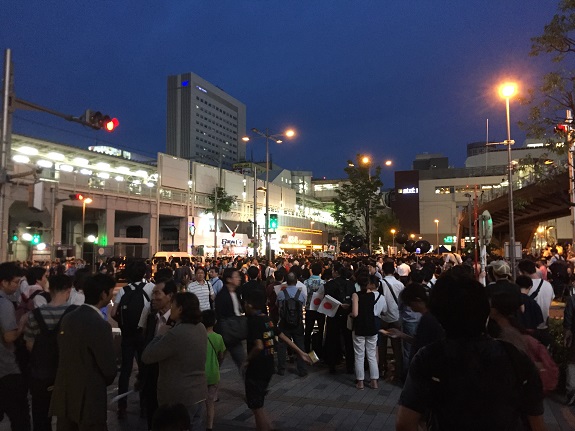 Since the national election day was Sunday, the Japanese Nationalists were holding a huge rally outside the Electric Town exit of Akihabara Station.  The crowd was huge, and stretched all the way out to the UDX building.  It was a sea of Japanese and Rising Sun flags.  I was able to maneuver past the event, and stopped for dinner at Okamuraya which has really tasty gyudon.  After that I took the long way around to the Central Exit of Akihabara Station and headed back home.  I wanted to rest up for my big Sunday plans!