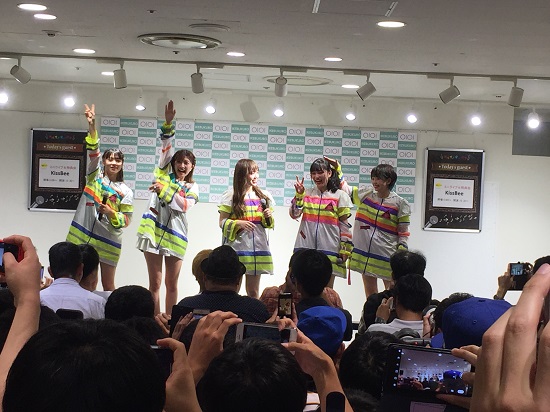 It was looking like a relatively lazy weekend for me.  Wasamin was out of town, Minyo Girls were performing, but for some reason I just didn’t feel like seeing them, especially since they will be doing a bunch of free live events this coming week for their new single.  Emox4 and FESTIVE were playing at the huge (and expensive) “The Chaos” idol festival at Shin-Kiba Coast.  I thought about attending, but the way they were spaced out on the schedule would’ve required me to be there for at least 9-10 hours.  I was going to chalk it up to being an idol-less weekend until I realized Kiss Bee were performing in Ikebukuro.  I love when the groups I like perform around Ikebukuro Station, since it is so convenient to where I live.  Not to mention it was a free live, so it would only cost me the price of a few CDs for handshakes and 2-shots.

I headed out a little late, needing to 1) get cash, and 2) top-up my IC card before grabbing a bus to Ikebukuro.  That is one of the nice things about the relatively quiet neighborhood I live in.  Not only do we have a subway station, but around 6-7 different buses stop nearby, three of which go to Ikebukuro Station.  Not to mention two of those buses stop right across the street from Ikebukuro Marui, where Kiss Bee were appearing, so it was super convenient.  I decided to forego lunch until after the first event, and headed straight upstairs to the top floor of the store.

It turned out most of the top floor is taken up by an anime store.  I looped around to the event stage in the back corner.  Unsurprisingly it was packed with people, many of which were lined up to pick up the daily photos Kiss Bee puts out at their events.  I did want to get a photo for Tanifuji Misaki (Misaki-chan) to sign, but I didn’t want to stand in the long line.  So I picked up three CDs and immediately grabbed a spot around the middle of the standing area.  By the way, these days Kiss Bee has become so popular that it is extremely tough to get a viewing spot anywhere near the stage unless you are willing to show up hours early to camp out.  It’s funny, but of all the groups I like, the Kiss Bee fans are by far the most aggressive about showing up extra-early for close-up spots.  Even before they became really popular it was this way.  Anyway… 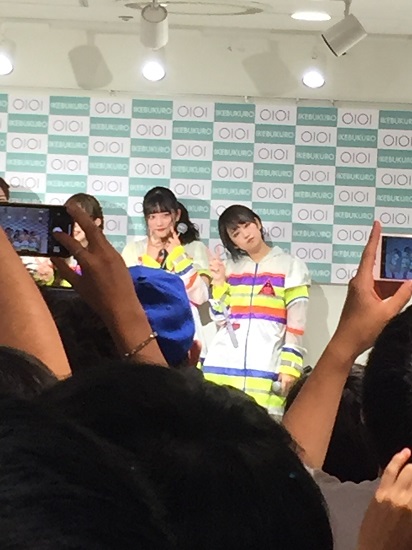 The group didn’t do their usual pre-show rehearsal, the manager instead came out to set the ground rules.  This was one of those venues that restricts the volume of the performance, and forbids calls, chants, and jumping.  So the fans were restricted to clapping only, which brings up another funny aspect of idol fans.  They have no rhythm whatsoever.  I have noticed this with some other groups too, but they get so off on the beat that it becomes hard to clap along.

The girls came out in the outfits from their latest single, holding their infamous siren-lights on top of their heads.  They performed a five-song setlist, which mainly consists of songs from their latest single (Love Karu*Mirumirutishon) recent album (Imaginism), their previous single (& PEACH), and their standard Mahou Nanka Yori Fantasy.  They had one long MC in the middle, but to be honest most of the fans were so busy talking among themselves that I could barely hear what the members were saying.  What I did notice from the moment they hit the stage is that Misaki-chan has changed her hair color back to black with blue highlights.  To be honest, I like her hair dark much more than I like it blonde.  My next wish is that she grows it back out a little bit.  Oh, and during “Yori Fantasy” Misaki-chan was pointing a gesturing at me for most of the second chorus.  She has commented previously that she sees me aiming my “Chupa Chupa” at her during the song.  The other thing I noticed is that the two newest members, Nonoka, and particularly Yui, are much more confident on stage.  The last time I saw Kiss Bee I felt it was easy to tell that they were the two new members, but I think at this point they have meshed really well with the rest of the group.  At the end of the set they did their signed poster giveaway, which I lost in the first round.

Ya know, I have long suspected some people cheat in that contest, given that I have seen a few people win multiple times.  I have seen one guy win at least 4-5 times, and it is hard to win.  Sure enough, I saw two guys attempt to cheat during the janken.  One guy tried to claim he won, and another guy I distinctly saw try to change his janken throw from choki to rock, until his friend called him out. 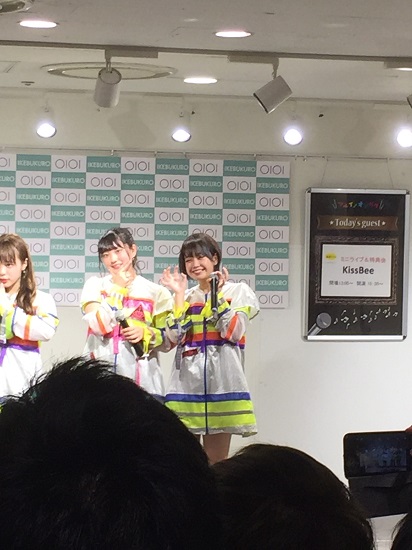 I had three tickets, and had decided to use one in the first event, and save my last two for the later set.  I went through the high-touch, where I always get a nice welcome from Misaki.  The other girls just smile at me; they know who I belong to, LOL.  Luckily I was able to get close to the front of the 2-shot queue.  When it was my turn I asked to do the pose that is part of the hand gestures of the new single, something they were trying to teach the fans during the MC.

I only had time for a quick greeting, and confirmed Misaki-chan was genki.  She noticed I had more tickets hanging out of my smartphone case, so she gave me a quick “Matta” before I scooted off the stage and out of the building.  It lunch time!

After grabbing a quick lunch, I went into Ikebukuro Station to properly fill up my IC card, then hung out in a nearby Dotour sipping iced coffee, anything to get out of the summer heat and humidity.  Most of July has been dreary and unseasonably cool, but we have had sun for the last couple of days, and with that the temperature has risen dramatically.  Personally, I don’t mind heat, but I am from the desert where it is a “dry heat.”  I don’t think I will ever get used to the humidity.

I journeyed back to Marui, and grabbed a daily photo of Misaki-chan so she could sign it during a handshake.  I had resigned myself to being pretty far back, but was able to maneuver a little closer than I anticipated.  The only problem was a really tall guy directly between me and the stage.  But I was pretty much committed to the spot I was in, so I would just have to bear it.  Kiss Bee did a different setlist from the first event, although all of the songs were from their recent releases.  Just Sing is probably my favorite song from their new single, but it was funny watching the fans react since it is a big audience participation song, but since there were chant restrictions you could hear the fans mumbling the chants, LOL. 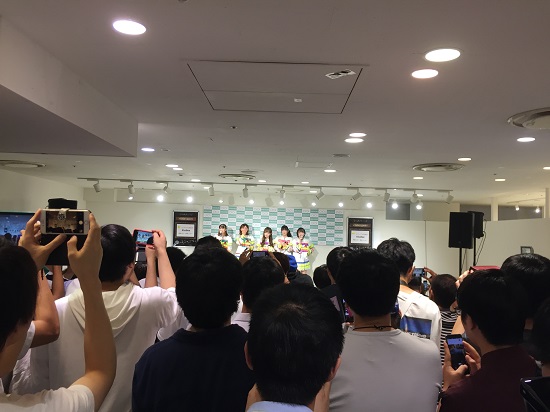 My view for the second show

Once again, I was pretty far back so many of my photos came out blurry or obstructed.  However, for the second show they asked people in front to kneel down for a minute so people in the back could take photos too.  Although I was in the middle, I decided to remain standing (although I crouched a little bit) since kneeling down on marble or cement surfaces is murder on my knees. (I have the same issue at Minyo Girls shows)  As you may have noticed, I mainly aim my shots right at Misaki, but I do take a few group photos too.  After that it was another first round janken elimination for the poster, and the show seemed to be over.  In fact I went downstairs to get something to drink, but when I came back a few minutes later the girls were still talking.  I’m not sure what I missed, but the show ended just as I returned, and I immediately queued up for the high-touch. 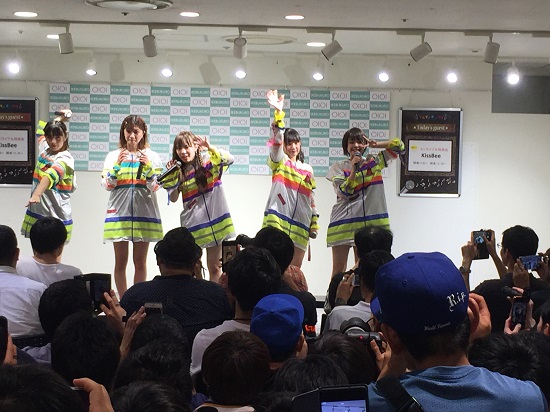 I wasn’t as quick this time around, and ended up a bit further back in the 2-shot line.  However, I didn’t mind since I would be sticking around for the handshake/signing portion of the event as well.  Misaki has the longest line by far, but the other members do alright.  In fact, the two newest members have much longer lines now than they did a couple months ago.  When it was my turn I asked for the “faiting” pose… 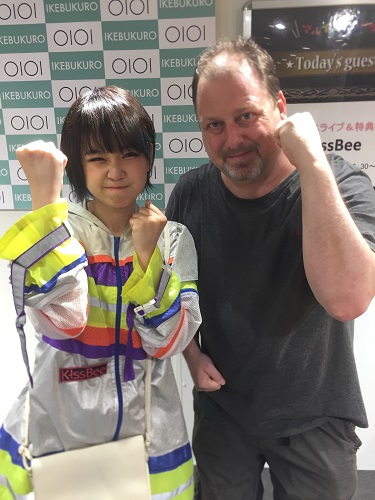 It wouldn’t be too long before they switched to handshake/signing.  In fact it was even quicker than I expected.  I had gone downstairs for a while, and when I returned the handshake queue had already formed.  At first I had trouble finding the end of Misaki-chan’s queue since it had looped a couple times, but I eventually found the end and queued up.  It ended up being a 20+ minute wait for my turn, which was okay since I was not in a hurry.  It was still too early for dinner, and I didn’t want to spend too much time at The Hub, the bar I planned to go to afterwards. 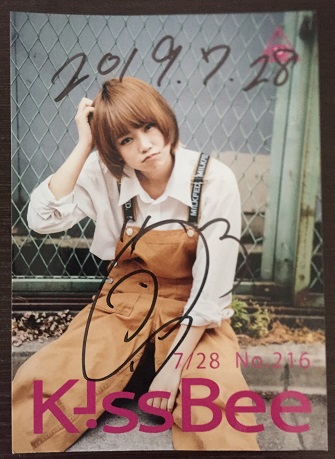 You get about 30 seconds or so to chat while the member signs your photo.  After complimenting her “new” hair color, Misaki and I pretty much talked about my job-hunting escapades in Japan, and that I am still doing my best to secure something before I have to move back to the U.S.  She returned my photo as the staff tapped my shoulder to get up and go.  I almost forgot to shake Misaki-chan’s hand, but she reached out with both hands and grabbed onto me before I left. 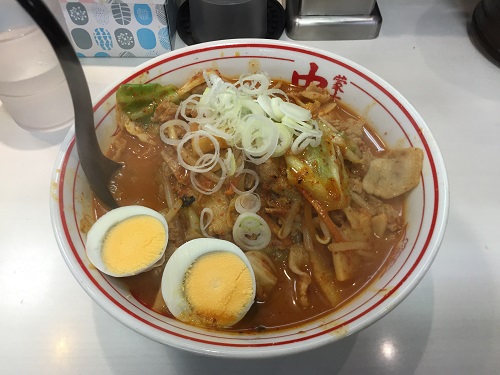 Once again I grabbed my bag and left the building, first to The Hub for a couple cocktails, and then to Mouku Tanmen Nakamoto for some spicy ramen.  I know super-spicy food isn’t the most popular choice when it’s hot and muggy out, but I hadn’t had it in a while, so I was in the mood.

I’m not sure when my next encounter with KissBee will take place.  As for this week, I will very likely be seeing Minyo Girls while they promote the release of their third single, and Emox4 has a cool looking show at Twin Box.  Anything to get out of the house for a while!