Wasamin was finally back in town after spending the weekend on Japan’s West Coast, performing in Ishikawa and Toyama Prefectures. I had been looking forward to her three release events this week. Well, at least two of them. I still haven’t completely decided about her Yokohama event on Tuesday. However, my experience this weekend almost made me consider a total change in plans…

After seeing DESURABBITS in Yokohama this past June, I have really become a fan, and have been wanting to attend more of their shows. I finally had the chance on Sunday in Akihabara, where they held a mini-live in support of their upcoming new single. You can read that event report here on my blog. I had such a great time, and enjoyed the show so much that for a moment I considered going to their live event on Monday in Kawasaki. The problem was that it completely conflicted with Wasamin’s event. So I thought maybe I would go to see DESURABBITS on Monday, and then see Wasamin on Tuesday and Wednesday. But then I came to my senses. For one, I had already told Wasamin that I would see her in Ageo. And I would feel really bad about Wasamin losing an event face-off with a group I have just started to get into. So as much as I would’ve loved to see DESURABBITS, I couldn’t do that to Wasamin, so off to Saitama I went.

Ageo is an easy commute from where I live. From Akabane Station it’s five stops on the Takasaki or Shonan-Shinjuku Lines (Three stops if you catch the hourly express train) I left my house to catch the bus to Akabane, and when I turned the corner I saw the bus sitting at the stop. I started running for it since that bus only comes every 10-15 minutes. Luckily the bus driver saw me, and just as he began pulling away he stopped, and then opened the do to let me on. I have seen bus drivers in Japan do that for people before, and it’s a very nice gesture. Nobody likes just missing the bus. As a result I was able to catch an earlier train than expected, and arrived at Shosen Plaza an hour before the event. 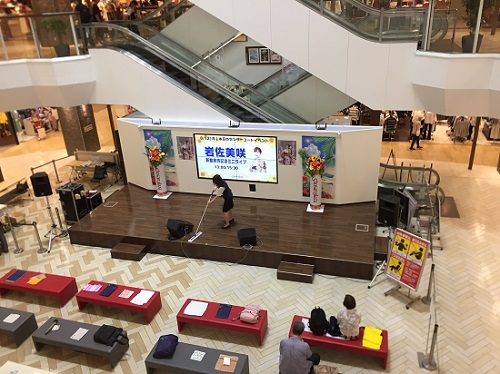 By the way, that girl mopping the stage was really cute!

The mall is actually connected directly to Ageo Station. Once you exit the station, you merely walk across a short bridge which leads directly to the mall. I walked over with another Wasafan who I met up with on the train. He had never seen Wasamin at this mall before. That surprised me since she performs there all the time. In fact this was my 4th time seeing her there. When we got to the event space the seats were roped off. It turned out they were limiting the seating area to those who bought CDs. It’s interesting since this is one of those malls that attracts a lot of older people who come to watch the events, but rarely buy anything. Yet they come early and camp out for the best seats. To be honest, I’m not sure how I feel about that. On one hand, it discourages people from coming who may have been inspired to buy a CD after seeing Wasamin perform. And one of Wasamin’s goals is to expose her talent to as many people as possible. On the other hand, it’s sometimes annoying when most of the seats are filled with people who take off the moment the performance ends, and don’t participate in buppan. In any case, I made my purchase, and was allowed into the seating area. They also asked me if I was staying for both performances, and gave me a pass for the second show too. I grabbed a 4th row center seat, and then went to lunch since I had tons of time.

I returned to my seat around 15 minutes before the event, and spent most of that time discussing Minyo Girls with the Wasafans sitting next to me. It’s funny how many of us were encouraged to follow Minyo Girls based on Wasamin and (former Wasa-manager) Ichikawa-san’s encouragement. There are probably around 5-10 of us who are fans of both. It was getting close to showtime, so I put on my Happi Coat. Wasamin was wearing the same Kimono she wore on Friday. Here is the early setlist…

I’m not completely sure why, but the crowd was smaller than usual for this venue. Perhaps the reserved seating had something to do with it, or the fact it was a holiday and many of the stores were closed. I also noticed the entire neighborhood, and the entire mall was really quiet. So it may have been a combination of factors. Among the things Wasamin talked about during her MC’s was the incoming typhoon that’s supposed to hit Kyushu this week, at the same time Wasamin is supposed to be traveling to Miyazaki Prefecture for a festival performance. Needless to say many of her fans are worried about her safety, and she asked the crowd if anyone was planning on traveling to the event. (two people raised their hand)She advised everyone to be careful, but I got the feeling she is a bit nervous about it too. (The Miyazaki event actually did get cancelled around the time she was doing this MC, so good news) Later she commented on the Kimono she was wearing. I thought since it was a dark-colored material that she would be hot in it, but Wasamin said the opposite. It does seem like it’s a lighter material, and perhaps because of that it breathes better. Oh, and there was a guy in the audience who kept holding up signs and frantically pointing at them throughout the show. I thought I had seen him before at this mall, and thought for a second that perhaps he was deaf? But no, he’s just another quirky fan. Occasionally fans show up to her events who have strange idiosyncrasies. Most of them are good-natured. (Although to be honest there is one who really annoys me, but I won’t get into that)

After the event they announced that they would be calling us up for handshakes and 2-shots by row. Since I was in the 4th row it would be a little while before my turn. I decided to pose next to the flower stand, just because it was something different. I hadn’t really planned on anything to say, so I asked her how Toyama was. I went on to say that I would’ve loved to have traveled with her this weekend, but it was too far. Wasamin was basically laughing at me the entire time. I mean I could’ve talked about DESURABBITS, but then I would’ve had to hear her lamenting about me liking other idols. I would have to come up with something better for the second show.

I decided to go for a little walk, first through the supermarket on the basement floor of the mall, and then around the local neighborhood. I came back a little while later to hopefully hear Wasamin’s end of show speech, but just missed it. However I did catch the announcement that they would be re-opening the seating at 3 p.m. for people with purchase tickets. I retreated to the local Choco-Cro for an iced coffee, returning just after 3…

Well it seemed as if everyone came back early and pre-queued for seating, as it was about 80% full when I got back to the event space. However, there was a spot available in the first row on the far right, so I grabbed it. This would also mean that I would be the first to do buppan after the performance ended. Here is the late setlist…

Hmmm, so it turned out songs #2-4 were exactly the same as from the events on Friday. I was hoping to hear her sing Tonde Istanbul today, since it’s the one new song I have yet to hear her perform this week. But I am happy she performed Fuyu no Riviera again since I personally think it is her “homerun” song from this release, and again she didn’t disappoint. Once again she was promoting people buying the “full set” of her new single to have all of her new songs, and she promoted her 2nd album as well since it contains Gakusei Jidai. She also mentioned that she loves Mondays, which drew an “ehhhh” from the crowd. However, she went on to say that it’s because T-point offers bonus points when you shop on Mondays. After that she was taking suggestions on other good point cards. Ha, no shortage of those in Japan. As I said, I was slated to go first in buppan, and they wasted very little time ushering me to the stage. Wasamin immediately walked over to pose for a photo with me, but I only had one ticket for a handshake only. She was slightly surprised…

I basically had a conversation with her about the point cards I like. I mentioned I don’t have T-point, nor do I have a JRE point card, which is also popular. The main point cards I use are my Aeon Card, my D-point card (which I still haven’t figured out how to cash out) and my Hub/82 Alehouse card, which I had accumulated so many points on that when I cashed half of them out earlier this month I received 15000 yen in Hub cash. Wasamin wasn’t familiar with The Hub, which surprised me since they are so omnipresent around Tokyo. But that was probably for the best since it’s a bar, and the fact that I have so many points on a bar card might be amusing to her. LOL. In any case, I was done early, and I hoofed it over to the train station and was back in Akabane probably before the event even ended.

When got home I noticed a whole bunch of fresh mosquito bites all over my legs. The mosquitoes have been biting me with a vengeance ever since it warmed up a couple weeks ago. I first bought an insect repellent for the house, which helped when I was home. But whenever I leave the house they are all over me. So tonight I finally bought some body repellent and bite relief medication, and I feel so much better. In the meantime Wasamin has two more Kanto events; tomorrow in Yokohama and Wednesday in Northern Saitama. Technically, both of these malls are a pain to get to since neither is near a train station. At Yokohama the mall is a 10-minute bus ride from the closest station. As for Saitama, there is a shuttle bus, but it only runs first thing in the morning, and there are very few taxis. I have a friend in Gunma who always comes to see me when Wasamin plays at Kamisato, so I don’t want to disappoint him, even if I have to walk 2km in the rain (according to the forecast) to get to the event. The last two times I went to Kamisato I arrived with a bunch of other fans and we were able to find transportation to the mall. Hopefully I will be just as lucky on Wednesday. And at this point I am thinking of going to Yokohama too. So more Wasa-reports on the way!