This event was the last scheduled in Kanto for the current single promotion. So despite Kamisato being fairly far from Tokyo (it’s technically in Saitama Prefecture, but you can almost walk from the mall to the Gunma Prefecture border) most Wasafans, as well as I decided to make the trip. In order to catch the irregularly scheduled bus from Jimbohara Station to the mall it required me taking a train early. But what the hell, I got to Akabane at 9:15, and caught the express train north.

By the way, it was pouring when I arrived at Akabane Station, and for the entire 80-minute ride north, despite the rain being off and on, the entire Western sky will filled with ominous black clouds, as was the sky behind us. What kind of weather would be run into at Kamisato? Well, as I exited the train the rain was coming down in sheets. There were three other Wasafans on the same train, and I suggested it would be pretty cheap if we split a taxi. But two of them mentioned the bus was coming in 10-minutes, so we might as well wait. Around 5-minutes later a bus arrived, which we boarded. At was around 5-minutes into the trip that I noticed something was amiss. We weren’t getting any closer to the mall. In fact, we were going in a different direction. I asked Kentaro-san if perhaps we got on the wrong bus? Sure enough, when we asked the driver he informed us he wasn’t going anywhere near Aeon Town. Luckily we had done a complete circle, and were back at Jimbohara Station. Unfortunately we had missed the last bus to the mall, so we ended up splitting a taxi after all, and still made it to Aeon Town around 90-minutes before the show.

Surprisingly, there were a lot of Wasafans already at the event. They must have taken trains in the early morning? There were still a few seats available, but they were all in the back, and the chairs were tiny. I decided I would stand for the early event, and headed off to lunch. When I got upstairs I quickly remembered how anemic this mall’s food choices were. The Food Court contained a Ringer Hut, Sukiya, an off-brand Takoyaki stand, and a random Ramen place. Downstairs was a Burger King, Mister Donut, a Nepalese Restaurant, and a Baskin Robbins. That’s it. After lunch I headed back downstairs to look for my friend Tanaka-san from Gunma, who always shows up at this mall to see me when Wasamin performs. Sure enough, he and his mom were sitting at a table near the Supermarket. Tanaka-san and I caught up (it had been a year since we last met) while we waited for the show to start. 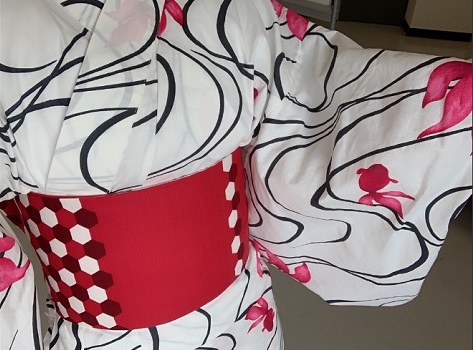 From Wasamin’s blog. Her new Kimono. I didn’t notice the “goldfish” pattern until she pointed it out.

Eventually we went back to the stage area, I donned my Happi coat, and got ready for the show. Except a few minutes before a strange guy who smelled really bad took the spot right next to me. I don’t know what it is, but I seem to attract these guys wherever I go. I decided I wasn’t going to spend the show with one eye on this person, so I went for a quick walk, and upon returning took a spot on the opposite side. Finally Wasamin took the stage. She was wearing another brand new Kimono, off-white with pink & black trim. Very cute. Here’s the setlist…

Wasamin thanked everyone who braved the rain to come to the event. She went on to talk about her cancelled event in Kyushu on Thursday, and how she got a lot of messages from fans who were worried about it before it was cancelled. And of course she modeled the new kimono, which got roaring approval from the fans. I took a look around during her performance of Fuyu no Riviera to check local fan reactions, and I saw a lot of smiles and people nodding in approval. She does such a great job with that song. I was in the middle of putting some of my electronics on my charger when the handshake queue came by me, so I jumped in. I figured Tanaka-san would want to hang out with me more, so I should get my 2-shot done early. Her manager (I think his name is Shinohara?) took the photo, but after examining it said it came out blurry, and wanted to take another shot. Oh well, this gave me an extra-long interaction with Wasamin, so I’m not complaining, although the second shot he took came out slightly fuzzy as well.

Yoroshi….Q! If you read my report from the Yokohama event, I mentioned talking about an old Hello!Project movie featuring Matsuura Aya as a soccer player. Whenever she met someone new, she would stylize “Yoroshiku” as “Yoroshi…Quuuu!” and make that hand gesture. So as promised I told Wasamin that I looked up the film the previous night, and found the title (VICTORY: Futto Girls no Seishun) and that it starred Ayaya, Becky, and a few Morning Musume members. I also informed her the entire film is available on YouTube. When I mentioned the title, she kinda tilted her head “Victory?” The movie was put out in support of Morning Musume’s 20th single, “Koi no Victory” Since Wasamin is an H!P fan, she immediately lit up, and said she hadn’t heard of it before. She asked what year it came out. (2003) Hopefully she will check it out.

So I was done with my early Wasa-greeting, and was off to the side with Tanaka-san, when I noticed the strange guy I saw earlier was in queue to meet Wasamin, ticket in hand. Uh oh. I didn’t like the looks of this. I told Tanaka-san I was concerned about this guy, and walked over to the side of the stage to see what would happen. When the guy was on-deck to meet Wasamin, he walked onto the stage and all the way over next to the guy currently talking to her, and the staff did nothing about it. Weird. Anyway, he got his turn, and Wasamin looked a bit confused over what he was saying, but she took it in stride, and he left without further incident. I retreated to the market to find a cold drink.

Tanaka-san and I further caught up, he brought a scrapbook of old photos he had taken at concerts he went to while in High School. He’s a big fan of American Rock, and had photos taken at the 80’s era concerts of Santana, Van Halen, Jeff Beck, Paul McCartney, as well as a bunch of old N.W.A. photos, since he is also a fan of pro-wrestling. Eventually it was time for the second show, and I found the exact same place to stand. In the meantime I could see outside that it was still raining pretty hard….

For the eight performances I saw over the past six days, she performed her new songs, Yurazu no Ame four times, Fuyu no Riviera three times, and Tonde Istanbul once. It turned out that Yurazu no Ame was performed at each venue, I guess since it is the main c/w track on both new versions of the single. It’s just that I love the other two songs so much more. Wasamin brought up the frequency in which Nagara Group artists appear at this mall. Minyo Girls perform there monthly, However checking the schedule, Mizumori Kaori, Tegawa Toshimi, Yamakawa Yutaka, and Hayabusa are all scheduled to appear there later this month. Wasamin exclaimed she would love to attend the Mizumori show as a fan. Well, she does have a day off now, LOL. At the end of the last song the rep from Tokuma immediately took the stage, but Wasamin waved him off saying “Hey, I haven’t done my closing remarks yet!”

Tanaka-san and his mother waved goodbye to me just as the show ended. He’s a cool guy. It’s too bad he lives in Takasaki, which is a bit far from Tokyo to hang out. Eventually I queued up for my second 2-shot. Something strange happened with the person in front of me in line. The guy took a 2-shot, and then after going to the table for a handshake he abruptly jumped off the stage. Wasamin and her manager looked confused, as the guy stood a few feet off the stage. I asked what was going on, but she eventually shrugged it off and came over to me for the 2-shot. I decided to go with the same pose I did the previous day in Yokohama… 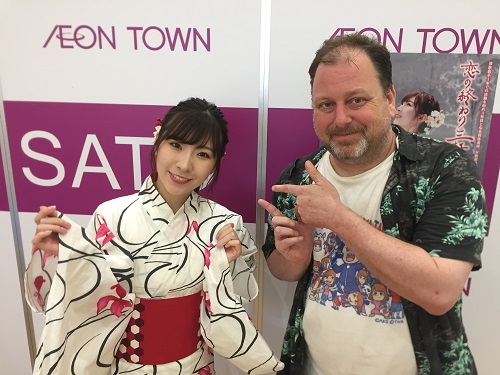 Once again I mentioned that I knew immediately it was a new kimono the moment she hit the stage. She asked what I thought, and I told her it was beautiful, and looked very comfortable for the summer. I went on to tell her that I received an email earlier in the day with some very encouraging news. I was happy since I have been worried lately. Wasamin said she was worried too. And with that I was out of tickets, and would either have to wait an hour for the next shuttle bus, or hopefully bum a ride from someone back to the station in about 45 minutes. Just then I noticed Kentaro-san grabbing his bag and leaving. He told me he was taking a taxi back to the station as he needed to catch a a Shinkansen to Osaka. So instead of waiting around I offered to split the taxi, and caught a much earlier train than I originally expected.

After two days off from performing, Wasamin will finish the promotional tour with two events in Yamagata Prefecture, which is just West of Sendai. Part of me would love to go, but it would be an expensive trip, and I really need to save money at this point, so I probably won’t go. However, Wasamin has two joint-live events next week with Minyo-Girls, and just announced a Mini-Live in Tokorozawa on the 31st. So not as much pressure to do the road-trip after all.

Oh, and I found out the reason for Wasamin’s recent change in managers. It turned out that Ichikawa-san, who has been Wasamin’s manager since late-2013, has been promoted to being a manager supervisor. So that’s good news, and she will still be involved with Wasamin’s promotion. It’s just that we won’t be seeing her at events. Well, hopefully she will make the occasional appearance, since all the Wasafans adore her.