It’s so nice to actually win a stage as opposed to receiving a mediocre to poor cancel machi number and praying I’ll get in. I say “win,” but I originally received a cancel machi email for this show too. However, it was from my twin pillars (fan club) application, and it was a reasonably low number (#27) So considering this was a normal kenkyuusei stage, I was a shoe-in to get into the seat lottery. Sure enough, Tuesday evening I received an email that my cancel machi had turned into a proper election. Score-a-rooni!

This would be my 54th theater show, and my 51st at the AKB48 Theater. I was excited that my two favorite AKB48 members, Ranchan and Zunchan were both in the cast. However, that ‘blessing’ can sometimes turn into a curse, which is a lesson I have painfully learned many times over when attending theater shows. When you support more than one member, how do you root for both of them without alienating one or the other? But first I would need to go through the seat lottery to see how good a spot I would get. There was always a chance I would get a bad draw in, and then it wouldn’t really matter…

Personally, I like a higher ticket number. It is just my personal experience that higher numbers generally fare better in the theater lottery. (For the record, I have the opposite experience at the SKE theater) So I took my time getting to the theater, first heading over to Entaba Akiba to pick up my DESURABBITS CD preorder, and then to The Hub for a quick pint. I made it to the theater around 17:45, bought my ticket (#153) and stored my bag in a locker. I always empty my pockets, save for my wallet and phone to make it easier to go through the metal detector.

Entering the theater I noticed the center and left were starting to fill up, but it looked like the right side was kind of empty. I immediately headed in that direction. The front row was taken, but there was only one person in the second row. That would be a great spot. However, just as I got there the guy in the last seat of the front row got up and moved. I wasted no time in claiming that seat. Front row baby!!! The far right is right next to both the main stage and the side stage. It had been so long since I had actually sat in a seat for a show, I was so happy!

I had remembered to bring a lightstick, so I was all set. The question remained, who was going to lavish me with attention during the show? And of course, how do I workaround my Ranchan/Zunchan issue? Here are a few observations… 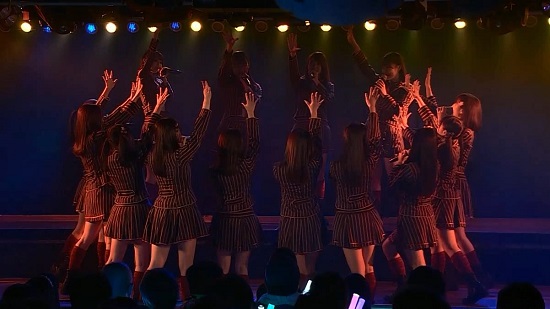 -There was a long delay between the kage-ana and the overture. I’m nut sure why, but it was over five minutes. Quite irregular. Speaking of screw-ups…

-I’m not sure how often it happens at the theater, but the sound engineer didn’t have the music pot turned up in the beginning of Two Years Later, abruptly raising the volume around 3 seconds into the song, it caused the girls to enter the stage a little late, but it was early enough for the choreography not to suffer.

-Sorachan had a ‘wardrobe malfunction’ during TemoDemo, the wrap around her waste falling off mid-song. She quickly grabbed it and threw it off-stage toward the front row. This caused a slight commotion where one of the guards wanted to retrieve it without getting in the way of the fans. I had to scrunch over since they needed to move the gate, then crawl across the floor to get to it. During the next MC Sorachan mentioned what happened and asked if anyone noticed. Everyone in my row raised their hand, and she was like “Of course you guys noticed.”

-During one of the MCs they were talking about foods they like to eat this time of year. Yumoto Ami mentioned that she loves Mouku Tanmen Ramen, which if you read my blog you may remember it is also one of my favorite restaurants. (It’s the one with the super-spicy ramen) Although I think she was mainly talking about the Cup Ramen version that they sell at 7-Eleven. 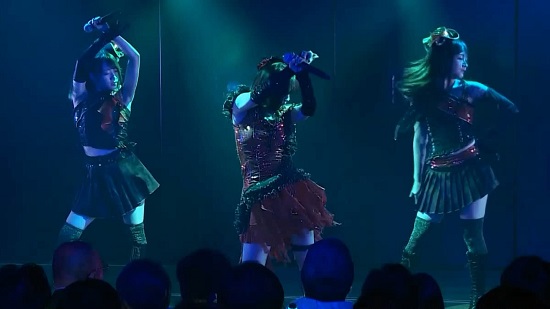 -I was really impressed with some of the members’ facial expressions during Inochi no Tsukaimichi. Specifically, Sato Shiori is great on that song. So is Okada Rina, and Zunchan.

-The last two stages I attended the fans had a bit of trouble organizing the encore call, but this time it went off without a hitch

As for which members I had notable interactions with?

Yamane Suzuha: The moment Shonichi started Zunchan beelined right toward me and immediately saw me sitting there, prompting a grin, and some obvious pointing. She would acknowledge me a couple more times throughout the show, but she knew where I was right from the beginning. BTW, Zunchan is a pleasure to watch onstage. She is so full of energy and enthusiasm, and I think her shorter haircut is a sign of her maturing a little bit. I mean in many ways Zunchan can be childlike, but she has definitely become a seasoned pro when it comes to the AKB48 Theater.

Ishiwata Sena: This was it, a proper chance for me to connect with Senatan since she was right in front of me constantly during the stage, and she spent a lot of the show playing with me and the guy sitting next to me. I also notice how the other members love grabbing at her, and hugging her. She is such a little pipsqueak, and so adorable. I was glad to really get the chance to pay attention to her, and she to me.

Yoshihashi Yuzuka was also right in front of me for much of the show. Although she didn’t really acknowledge me until the end. It turned out it was her 100th theater show. Honda Sora waved to me early in the show. On the other hand, Ranchan spends most of the first half of the stage on the other side, so I don’t think she noticed me until much later. I did scream her name quite often, even more than I did for Zunchan. Aside from that, I had pretty much every member in front of me at one time or another. Some smiled at me, others didn’t pay me any attention.

I was the first one to go through the ‘high-touch’ line, and basically got the usual reactions from the usual members. Ranchan pointed to where I was sitting when I passed her. I mentioned to Yumoto that I am also a Mouku Tanmen fan, but I’m not sure she heard what I said. Oh well. With that I headed right to the goods table to pick up the photo set, then grabbed my bag and went down the escalator. 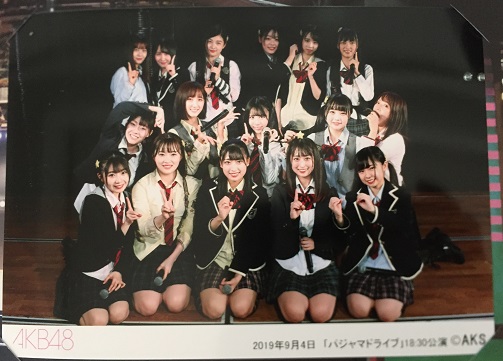 It had been so long, at least a year since I had a seat for a theater show. It is such a different experience when you are up close instead of craning your head in the back. And the interactions you get to have with the members are priceless. I just hope it isn’t another year before I get to have that experience again.