It should come at no surprise that like everyone else on the planet, my idol experiences came to a screeching halt as the Covid-19 pandemic became more serious.  Being that my age and health history put me in the target risk group, I had resigned myself to doing minimal traveling, partying, and whatnot long before Prime Minister Abe and Tokyo Governor Koike started restricting events and declaring states of emergency.  In fact, since January the only events I have been to were Wasamin’s February mini-lives in Ageo and Okegawa.  Moreover, I have only traveled to Tokyo once (for a work-related training) and to Omiya twice.  I can also count on one hand how many times I have eaten in a restaurant in the last three months.  I almost went to a Hissatsu Emomomomo!! show in late-February, but decided it wasn’t worth the risk.

In the meantime, some of the groups I post about here have been doing what they can to keep their fans entertained while we are all doing our best to social distance.  AKB48 has temporarily (?) re-branded themselves as OUC48 (Indoor 48) and are doing regular programming on SHOWROOM and YouTube.  I think it’s really cute watching them perform inside their homes on a split screen.

If you haven’t checked out a performance, I recommend it.  They do events almost daily.  Speaking of the 48-groups…

I had originally planned to purchase handshake tickets for AKB48’s latest release, but then forgot to pay the invoice and forfeited my tickets.  Lucky for me though, since all of those events have ended up being postponed, and who knows when they will be rescheduled.  I did purchase a small amount of HKT48 tickets for mid-August, but I doubt that will happen as scheduled.

Babymetal has been broadcasting some of their past major concerts on YouTube.  Last month they showed both of their Tokyo Dome concerts, and last week their show at Wembley in London.  It was the first time I had seen the Tokyo Dome “Black Night” show since I actually attended it, and after watching both shows, I thought “Red Night” had the much more exciting setlist.  Hopefully we will be hearing more from them soon. 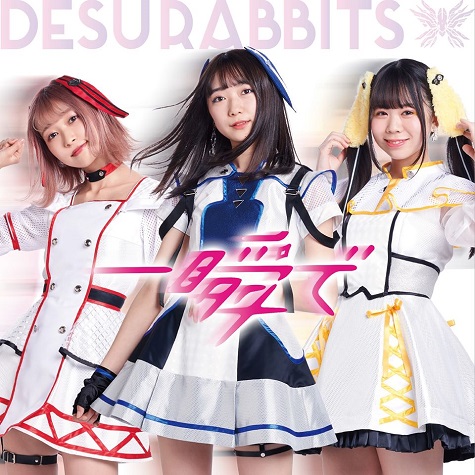 DESURABBITS had the misfortune of scheduling a new single release just before the pandemic grew more serious, and as a result they had to cancel all of their promotional events.  They did do a handful of YouTube mini-live performances to compensate, which were cool, but as a result I did not purchase a copy of the new single.  It is much more fun to me when I can buy them at an event, so hopefully whenever things calm down they will plan a few in-store shows.

Minyo Girls have mainly stuck to SHOWROOM, which is too bad for Miyabi since she had just embarked on a solo career this year.  I’m not sure what Emox4, Festive, and Kiss Bee are doing, although Festive did do an internet signing session, and Emox4 are selling a lot of chekis on my friend Derek’s Idol Underworld website.  I do see those members tweeting too.  And then there’s Wasamin…

Despite cancelling a bunch of events, as well as the play she was supposed to be in this Summer, Misaki-chan has done a good job of staying active and connected with her fans.  For one, she has increased her appearances on SHOWROOM to around twice per week. (It used to be around once a month) She often sings a lot of Karaoke during those shows, so they are a lot of fun.  She also scheduled two internet signing events, one for her new single which released last month, and the second for autographed chekis. 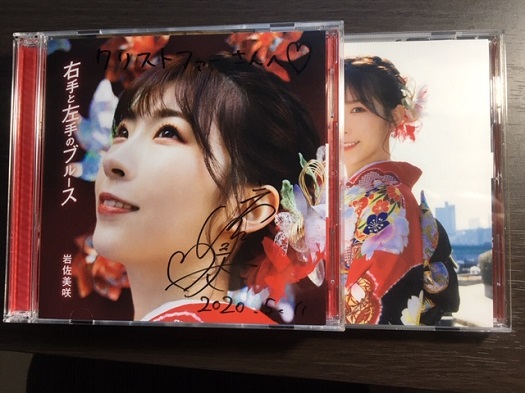 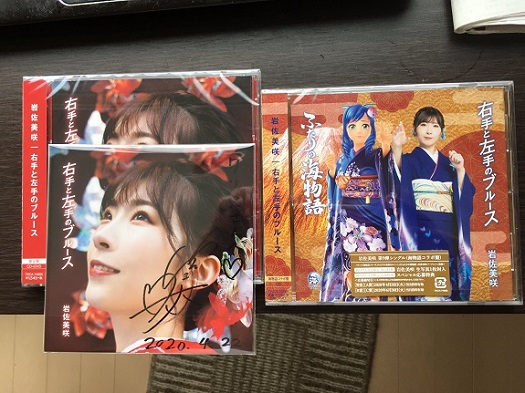 Yes, Wasamin released her 9th single, Migite to Hidarite no Blues in the middle of this pandemic crisis.  They didn’t announce it until March, so they knew the circumstances at the time.  To make up for the lack of events, they decided to hold an internet CD signing session where fans could purchase copies via a dedicated website, and Wasamin would live-sign the CDs on YouTube.  This event, and the cheki event were postponed due to Abe’s emergency declaration, but they were finally held this past week.  This also gave Wasamin a chance to offer a re-sale on the CDs.  Needless to say the single did not sell nearly as many as past releases, but that was to be expected.  It still finished #1 on the Enka single chart and 13th on the Pop chart.  Below are the YouTube videos of the CD event.  I didn’t buy any chekis since the selling process was sort of a pain, but I did purchase CDs, so she talks about me a few times on that video…

In the first hour Wasamin read messages from the people who bought CDs since those were already and signed and sent out on the release date, but for the second and third hour she actually signed  CDs for those who participated in the re-sale.  She first mentions me at around 34:30, followed by mentions of my friends David and Albert.  Yeah, it was funny how they bunched all us foreigners together.  My next mention is at around 2:34:30 where I “cleverly” used the name “Christopher” so I could get a different looking jacket.  However, that ended up being a slight gaffe as I could tell Wasamin wasn’t sure if it was me, or someone with a similar name.  All the while the people in the chat were trying to tell her it was me, which she noticed a couple minutes later.  At the end of the day I should’ve just gone with my name in romaji for that one.  Live and learn.  Oh, and here is the video for the cheki signing in case you are interested.

So that’s my update.  I ended up changing jobs last month.  I am no longer working in the city I live in.  I am now commuting a short distance north to Kitamoto City.  I loved where I was working before, but it ended up being a financial decision.  This particular area has been largely unaffected by Covid-19 (2 confirmed cases) but most people are still doing a good job of practicing social distancing and mask-wearing.  Keep in mind, this is a rural-suburban part of Saitama, so it isn’t too difficult.  As for my future idol plans, we’ll see.  Although I doubt there will be much opening up in that respect until the fall at the earliest.  But if Wasamin, or any of the other groups I like want to do some of these internet signing events, I am all-in!