I know I have been a bit slow on the uptake when it comes to doing my Japan trip reports.  In fact I believe two posts are in order.  The reason is that this first weekend was so busy that when I got to my hotel I could think of nothing but going to sleep!  That’s a good thing, right?  By the way, am I too late for IW’s cake day celebration?  Courtesy of one of the many crepe places around Tokyo… 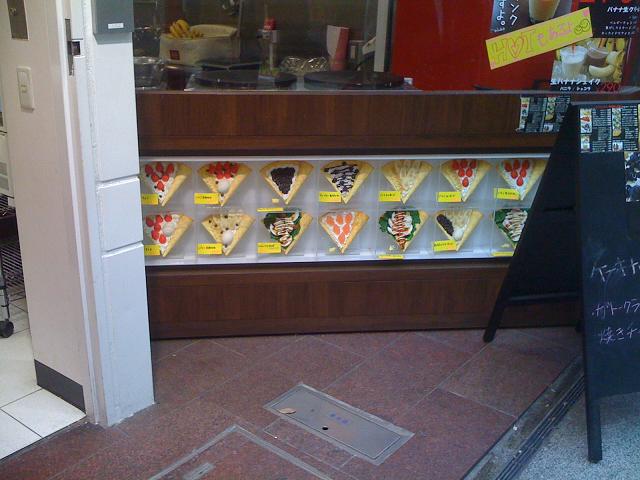 The first order of business, two shows at the AKB Theater in Akihabara.  I had won for the afternoon show of Team Kenkyuusei, and SDN48’s evening show.  That meant I was going to spend quite a few hours in Akihabara.  I spent the morning cruising Harajuku, mainly to see what kind of Morning Musume tickets I could score for the Sunday matinee.  I am in sort of a quandry with MoMusu.  On one hand I am bored with them, and they don’t give me the excitement they used to.  On the other hand I still support Tanaka Reina 100%.  And to come all this way and miss their show feels like somewhat of a betrayal to Reina.  With that in mind I scored a 9th row seat!

AKB48’s Research Students are pretty much an unknown to me right now.  Since the Team shuffles are beginning as we speak, Team RS is mainly comprised of brand new 9th generation girls.  I have seen Team B’s 4th stage many times already, but I saw this as an opportunity to get the know the new girls and pick out a few faves.  One particular girl who stood out to me is not new by any means.  She was fired about a year ago, but had the chutzpah to give it another go and got rehired.  That girl is Sara Fujimoto. 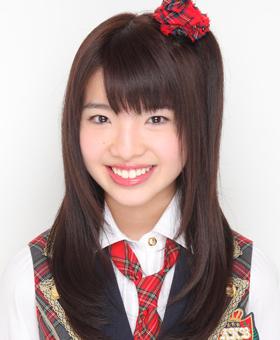 One thing about Sara, she is really cute.  But her looks were never the problem.  I think the issue was really her age.  She wasn’t mature enough to be an AKB girl yet.  And being dismissed by management really sparked something within her.  She was confident, she looked great.  She was a totally different person from the girl I saw subbing in Team K a year ago.  So good for her!  But the Kenkyuusei were merely the appetizer to the main event…SDN48!

As many of you know SDN48 is my favorite idol group, and why not?  Meetan is in it!  To be honest I missed her, and couldn’t wait to say hello at the High Touch event again.  I got a 4th row seat, but was majorly obscured by the “pillar of death”.  Anyone who has been to the theater knows what I am talking about.  Ultimately I could only see the left side of the stage.  Meetan spent most of the first half of the show on the other side, but came to my side for the second hour.  Finally!  She spotted me pretty much immediately, from then on she was giving me eye contact and playing with me for the rest of the show until…. 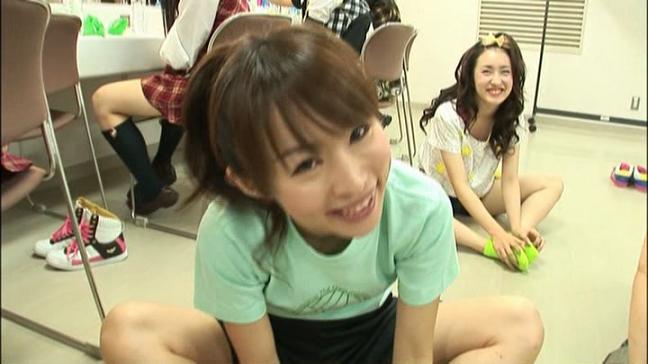 During the 2nd to last song she ran offstage.  WTF???  What’s the matter with Meetan?  This can’t be good!  There is a history of correlation between my Japan trips and Meetan’s injuries.  Please don’t tell me she got hurt again!  She didn’t participate in the closing MC, but came back out for Vampire Keikaku.  I was happy for a moment, until she bent down for part of the dance and I could tell she was in total distress.  She looked like she was about to cry. 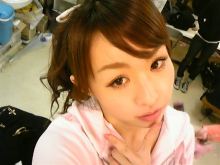 Before they started the High Touch portion of the show they announced Meetan wasn’t participating.   Oh no, this is serious!!!  The problem was nobody knew what was the matter with her, and she didn’t post on her blog the rest of the night.  Thus began the onslaught of worried messages by fans (including myself) wishing her the best and praying for her to be okay.  The next day she posted this message…

It turned out she had come down with some sort of cold/fever but decided to perform anyway.  Her temperature rose up at the end of the show, so she left.  But she felt better the next day, and surprisingly chose to perform for Sunday’s SDN48 doubleheader.  She is such a trooper, sometimes to a fault.  As a fan often i wish she would take it easy and not try so hard.  At the same time it is one of the traits I love about her.  She is always thinking about the fans, and wants to make them happy!  Anyhow, Meetan was okay.  That’s all that matters. 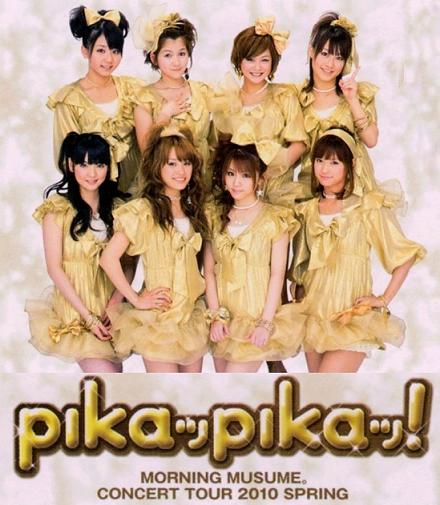 This was the opening weekend of Morning Musume’s Spring Tour, and as a tradition I usually attend the concert with Celestia from Bikkuri Project.  Unfortunately we couldn’t make our schedules work.  Too bad, I love seeing the shows with her!  I got to Tokyo Koseinenkin Keikan about 40 minutes before the show.  I didn’t have any glowsticks so I decided to head to the swag counter to pick up a few goodies… 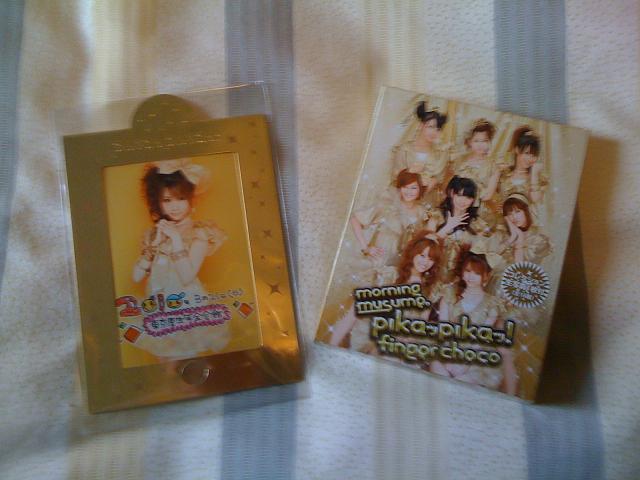 Pika Pika Choco!!!  I am not a sweets eater, but they always have these so I decided to get them for once.  I also got my first MoMusu Uchiwa!  You may have noticed it isn’t in the picture, that is because I dropped it at some point. 🙁  I thought of buying another one, but the show was about to start.  What the hell do I need another Uchiwa for anyway? 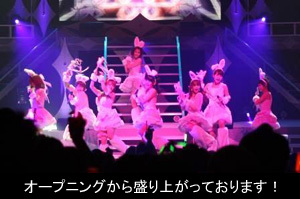 The show was predominantly the new album tracks, coupled with virtually the same songs from the 2009 fall tour.  As many times as I have seen Morning Musume there are still a few songs I have never heard live, and would love to.  Shabondama anyone?  Instead I focused on the girls’ performances.  That is when I wasn’t ogling Reina! (hehe)  She is a living doll!

Two girls who really stood out for me were Mittsi and Sayumi.  Sayumi is really beginning to transform into an adult.  Her chubby cheeks were noticeable absent, and her skin looked better.  Personally I think it’s great.  As for Mitsui Aika she was omnipresent at the front of the stage in the opening set.  Good, it’s about time she showed up!!!  The biggest WTF moment came during Renai Revolution 21 somebody came out dancing in a dog costume for the song.  Who is this????  The “dog” stayed for the MC, and the girls were interacting with it.  I thought for sure that someone famous (Koharu?  Yossie???) would pop out of the costume, but we never found out.  Awwwwww!

About midway through the show they did a “unit set”.  Gaki/Aichan started with Ani hi ni Modoretai, which is a nice song.  Not quite my style though.  I really wanted to love 8th gen’s Osaka Omainen.  LinLin was in the lead, being totally genki per usual.  And JunJun was obviously adorable.  But the fact is I don’t like the song.  the 6th gen’s song was the best overall.  Ooki Hitomi is like a typical H!P song, but the girls performed it well.

After seeing them perform Resonant Blue for like the 1000th time, LinLin came out to introduce a video.  I guess they are going to do this differently for each show, as Celestia’s show had Sayumi and a different video.  I saw Chokkan2, which was a mix of live performances and the different versions of the PV. 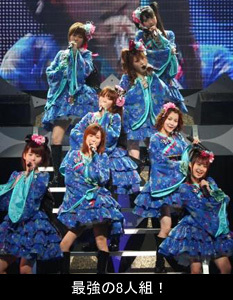 At this point i wasn’t too enthused about the show.  But the next set was by far the most entertaining to me.  It included Mikan, which is quite possibly their best live song.  Ame no Furanai lead by Jun/Lin.  I lived seeing them front the entire song.  The medley was cool, My Dear Boy was good, and Koko ni Iruzee was probably the best part with all the fan interaction.  But the second to last song was far and away my favorite…

Genki Pika Pika is awesome, and dance they do for it is soooooooooooo friggin’ cute!!!  Like they are washing their face or something.  KAWAII!!!  I could watch that song all day!

The encore started with How Do You Like This Japan?  I have seen this performed tons of times as well.  But the costumes they wore were the most Kakkoi!  Blue jeans, totally yankii style.  Except for Reina.  Hahaha, I can just imagine the think tank for that one.  No way Reina is wearing Jeans!!!  I was really looking forward to the final song Namidacchi after reading Celestia’s review.  And I can see what she likes about it, although I prefer the fast part of the song to the slow part.

So there ya go!  I think that makes 12 times seeing MoMusu.  I was covered in sweat so I went back to the hotel to dry off before going back to Akiba to see if I won for SDN48.  I had “Cancel Machi #114”.  Not a good number, but there was an outside chance.  When they announced the waiting list, it finally ended at #113 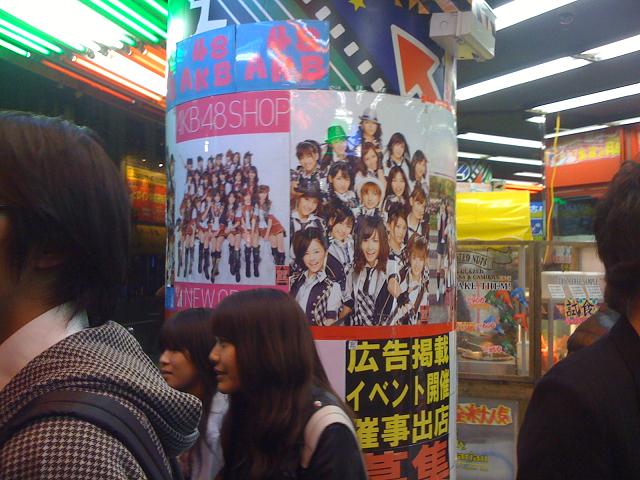 A few of the fans knew I had #114 and said “Hey let him in, he’s from out of town”.  The staff took one look and said.  “Forget it, he is here all the time!”  LOL, I guess my gaijin pass is expired.  They now see me as a regular!!!  Instead I had an awesome dinner with a bunch of fans who seemed to be fascinated with my reasons for loving Meetan.  We talked for hours over Chinese Food.  It was as good as any show.  So a great night.

But as far as awesome experiences are concerned…none can be compared with Day 3.  Stay tuned…