Oh yes!  Those of us “in the know” already were aware that Wasamin was a superior singer.  Now it has been revealed to all that she among the AKB singing-elite as Misaki-chan won AKB48’s Karaoke contest at the Aki Matsuri concert this weekend.

We have also learned that among Wasamin’s many talents, she is an ace at singing Enka-style.  She sang enka at the Team Ogi show last month.  And again both nights this weekend she performed songs by Ishikawa Sayuri.  But that’s not all…

On the first night Wasamin teamed up with Lovetan to perform my favorite AKB48 song of all time, Oshibe to Meshibe to Yoru no Chouchou.  Iwasa taking Meetan’s part…THAT IS SO AWESOME!!! 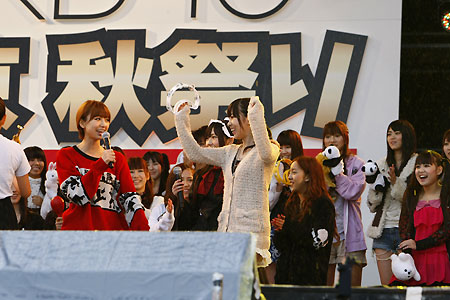 As a result, Wasamin has won a trip to Hawaii.  I’m sure she would love a few days of surf, sand and relaxation.  But AKB management wouldn’t send her there just for the heck of it, would they???

3 thoughts on “And For Your Grand Prize…A Fabulous Trip to HAWAII!!!”