In the past I would do a lot of writing at the end of each evening when I visited Tokyo.  To be honest I have been really tired every night.  I am guessing because the first few days had a lot of events for me to see.  There wasn’t much down time.  Like Saturday, Sunday entailed going to two different shows.  One in the afternoon and one in the evening.  But this time it was at two different venues…

I was in a quandry over what to see on Sunday.  AKB48 was having an all day handshake event in Saitama.  Momoclo was performing in some Wota-con fanfest.  Berryz was at JCB Hall.  But it was all decided when I won a ticket to see SDN48’s 2nd gen. perform at the theater that night.  It only left me with one other option…

To be honest I sort of fell off the H!P Bandwagon about a year ago.  It’s not like I don’t like them, they just don’t get me excited like they used to.  That said, of all the groups the one I still like the most is Berryz Kobo.  If for no other reason than Maasa Sudo is there.  Whatever I think of H!P, I still think Maasa is totally awesome!

I headed over to Harajuku a couple hours before showtime to score a ticket.  They had about 8 left, and most of them were pretty expensive (around 20000 yen)  But they still had two tickets under 10000.  One was in toward the back of the floor on the right.  The other was first row balcony just right of center.  The guy at Gorakudoh was convinced the balcony seat was far and away the better choice.  So I took his advice and went with it.  Had I taken a minute to think about it on my own….

The pros and cons of “Family Seats”.  I have sat in the Family Seat area once before.  Ironically it was also for a Berryz Kobo show two years ago.  The good news is I had a perfect view of the stage.  Since JCB Hall is a relatively small venue, even the balcony is pretty close.  The bad news is you aren’t allowed to stand up during the show.  The seats at JCB are small, I am by no means a small guy, and neither were the two guys sitting on either side of me.  So I was kinda sandwiched in there for the entire show…Not the best way to see a concert. 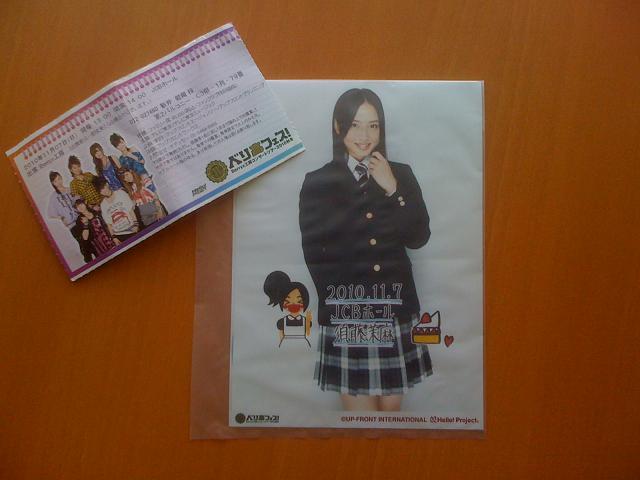 After picking up a couple of Blue glowsticks and a Maasa picset I was ready for action!  About 10 minutes before the concert started the girls did what I am guessing was a pre-recorded “radio” show, where they picked a few songs to play before the concert began.  That was the first time I had heard the new S/mileage, which I think is the best song they have EVER put out!  The crowd had an awesome chant for it too!  That is the greatest thing about H!P fans, in particular Berryz fans.  They certainly are rabid for the group!

Some of my favorite performances of the night were 1) Joshi Basket-bu ~Asaren Atta Hi no Kamigata~, I don’t remember, but this may have been the first time they performed that live in like five years!  I have always wanted to see it live.  This time it was done as a duet by Momo and Yurina.  I also loved Maji Bomber, which I honestly hadn’t given a really good listen to since it came out.  But it really kicks ass live.  Danna Sama and Yuujou Junjou are always great, I have seen them before.  However, my favorite moment of the entire show…

Had to be Riichan’s tsundere character Ibu Himuro doing her new single ‘Elegant Girl’.  Not that I love that song, in fact I bought the single for for the Ogawa Mana track.  But I was surrounded by Risako fans at the show, and they just went wild when she did that character.  I mean they were swooning with every word.  Not only that, when she sang the song instead of calling “Risako” they were all calling “Ibu-sama”  It was just hilarious, and girls right behind me were laughing their asses off!

I had mentioned this last Fall, and this year was no different.  Maasa simply proves over and over again what a great personality she is.  She practically ran every MC.  If you didn’t know better you would think she was Captain.  Maasa has the perfect personality, and I could see her doing tons of variety programs in the future.

Anyhow, it was a great show.  I am really glad I went.  Now if I can just remember…NO MORE FAMILY SEATS!

After that I popped over to Akihabara (two stops away) to get ready for SDN48.  I was really excited to see 2nd gen for the first time.  However I don’t really know the members yet, aside from Akiko who I think is really cute.  The good news was a few members from 1st gen would be there, including Hatakeyama Chisaki who as you all know is my favorite SDN girl not named Ohori Megumi.

Now for this show I had an Ippan ticket, hich meant I was in the regular seat lottery.  I love being in the lottery even though my luck has traditionally been horrible.  The best I have ever gotten was 12 group (out of 25).  I had ticket #39, which meant I was last in group 30-39.  Would my luck change tonight???

I set a new low for myself.  Not only were we the LAST group called in, I was last in line.  Which meant I had the WORST ticket of anyone that won the show!  Oh well, I wore it like a badge of honor!

As far as the show was concerned, they do the same set as 1st gen., so no surprises there.  I spent most of the show 1) cheering for Chaki, and 2) trying to find a favorite member of 2nd gen.  I had mentioned I really liked Akiko, but I wasn’t feeling the magic during the performance.  I saw a couple of other girls I liked, but I wasn’t sure who they were.  But then I saw her, the one I was magically drawn to the entire night (other than Chaki).

Oyama Aimi.  Hahaha.  I am a sucker for girls with noticeable teeth.  She is just awesome.  I couldn’t stop watching her!

Anyhow, going into High Touch most of these girls didn’t know me.  Since my seat was so awful they didn’t really see me either.  So I got many looks of surprise as I went through the line with the exception of Nachu, Machiko and Chaki who are familiar with me.  Many of the girls switched to Engrish as I passed by, including Akiko who was adorable up close!  Mana Ito and Rumi Matsushima also gave me a great reaction.  But Chaki was again the best.  She knows I am really fond of her.

Another tiring buy awesome day.  Jeez, being an idol fan in Japan is just a killer!  So much to do and see.  Thankfully the next two days weren’t going to be quite as hectic, but they are two of the most awesome things I have gone to so far.  A star studded TV-show taping and a CD Release concert/event!  Wait until you hear the groups I got to see UP CLOSE!