Time to get this party started.  Yep, I am back in Tokyo…Yatta!!!

Just off the plane, totally jetlagged and slightly hungover…I made it over to the venue for the 12+ hour Kaze wa Fuiteiru handshaking extravaganza. I had 29 tickets, but only 25 were usable since my precious Tan decided to play hookie from the event. MEETAN!!!

Actually, I think I heard a rumor that Meetan was doing a gravure photoshoot, but I’m not sure for what.  Maybe a DVD?  Don’t quote me on that.  Just something I heard.  By the way, they decided to do this event in the larger part of the convention center. Problem is that it is on the opposite side of the property, FAR from any restaurants and the train station. All they had were two drink vending machines for what seemed like a million people!

So without Ohori Megumi I stll had 25 usable tickets for 12 girls. Almost all of which I had previous handshaking experience with. At this point pretty much all of the girls that I get tickets for know me because I stick with my Top 6 AKB members, Top 3 SKE and Top 5 SDN. Makes it easier with my limited Jp skillz. Unfortunately I got shut out on Churi tix. But that’s okay since I will see her next week at another event.

Anna Ishida (SKE) Poor Anna, she had the shortest line of anyone I went to all day. In fact there was no line. What’s up with that? She is super-adorable and super-genki! She was waving to me as I walked down to her station. She s so cute. I told her that I loved Bowling Ganbou and her “woof woof” song (I couldnt remember the name of the song she does the dog imitation in, LOL). She is just so cute and enthusiastic.

Nito Moeno: Most all of the girls were wearing very fall-like outfits. Moeno looked very pretty, her dress was reminiscent of the Kazefui PV. I told her I was happy to be in Japan and was happy to see her. On my 2nd ticket I tried to tell her that she was funny in Bimyo, but I got all jumbled up trying to explain which skit I liked (hehe). Anyway, I got out that she was funny. Hopefully she didn’t take it the wrong way

Komori Mika: I had morning and late afternoon tickets for Mikapon. Wow, Komori now remembers me. That is awesome. She always seems like such a blank slate, that I can never tell. But this time she knew me for sure! We talked alot about Himechi (her adorable cat) I told her that Watarirouka Seven is THE BEST Watarirouka! She liked that. She wore a red one-piece dress, but she had on a black Satin Jacket over it which looked very cool. In fact at one point I told her she looked Kakkoi! Funny thing was, Amina was next to her and had on almost the same outfit! At the end of the day, I am happy I have taken the relationship with my #2 AKB girl to the next level!

Katayama Haruka: Wearing an off-white flowing dress, with hair extensions and a cute hat. Haa looked very pretty. With my first ticket I went up one of her regulars. He introduced me as one of his friends. Haa told him that she has seen me lots of times. WIN! Anyway, I pretty much told her how pretty she looked, and everytime she gets to be on AKBingo! she is very funny, and they should put her on more TV shows!

Tanabe Miku: She had her slot switched from evening to morning because she was flying to Singapore that afternoon. First of all, I barely recognized her! Tanamin is such a chameleon. Her hair was dark, styled differently and she was wearing Prince of Tennis cosplay. I guess she wanted to have on comfortable clothes for her flight. But the result was totally adorable. Which I told her. I also congratulated her on Baby Gamba, and asked her to say Hello to all of my friends in Sgp. So Sgp people, feel free to mention me if you guys see her! BTW, end result…I get a brief mention on her blog

I have mentioned before that I originally had a hard time connecting with Tanamin. Usually when this happens I sort of give up on handshakes with that member (See Harukyan, Nakayan, Sasshi) But I have always stuck with Tanamin because I have liked her pretty much since the beginning of Team B. She is just so quirky-cute. Just my type!

Yokoyama Yui: Was dressed very business-casual. Too cute! I’m not sure if she remembered me from before, but I have only met her once before. She likes to try and interview me when I come see her, which is fun but hard! This time she asked me where in America I am from. I told her that I really like Not Yet, and I complimented her on her outfit. On my first ticket I thought she looked tired. But she always seems energetic and enthusiastic during handshakes. I am so happy I decided to start going to her. She is an extremely sweet girl.

Masana Oya (SKE): Yayyy! My SKE Oshi had the cutest little shorts on, showed off her butt very well. BTW, Masanya has a legion of dedicated fans that circled her line ALL DAY! Her queue was always huge! Anyway, I wished her a happy birthday, and I told her I was making my first ever trip to Osaka for the Okie Dokie handshake. The coolest part? At the end of my second ticket with her she said she would see me in Osaka. That meant she understood what I was telling her, and remembered it for later. AWESOME!

Nachu (SDN): Her line, and everything around her is a raging party. She even had Wasamin (who was next to her) cracking up. Anyway, I barely had to say anything to Nachu since she decided to put on a show from the moment I got to her. She even got the OJS security guy involved with talking to me. I highly recommend going to see Nachu if you ever want to have fun during an event. Nachu is great! 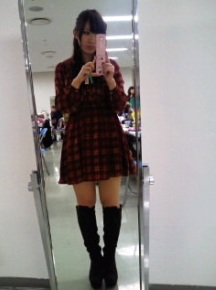 Iwasa Misaki: My love fest with Wasamin continues…Of course I had the most tickets for her (five). I would love to get more. But the good news is her line was pretty long for her entire 5 hour shift. Wasamin had a few fans looping her line all day too. She had on a very fall-like dress with huge heels. On my first session I asked her how she got so tall all of a sudden, so she showed me her shoes. (LOL) I got pretty much everything I wanted to say to her out during my five tickets. And the best part? Wasamin did her best to speak English to me the entire time! I thanked her for that. The other best part? How many “I love you’s” I got. One per ticket. And on the last ticket I told her again how much I loved her, how happy she makes me and she would always be my oshimen. She leaned forward and said “I love you too” That’s my baby!

Oh! The Minarun moment!!! Just when I was going to queue up for Wasamin, Togasaki came out in his tux on a riser behind the handshaking lanes. The entire venue froze. He then introduced Oba Mina who came out with tears in her eyes to make her announcement, and ask the fans to allow her back into AKB.  It was such an adorable moment. Watching her apologize and requesting permission from the fans. I was in the audience for the Yokohama “agency promotion” announcements last year. Moments like these are just priceless, and unforgettable!

By this time I was beyond exhausted…and hungry. But I had 5 SDN tickets to get through. Since my friends also had evening tickets I would tough it out!

Hatakeyama Chisaki (SDN): I love Chaki, but I really fumbled what I was trying to say to her. But it’s okay since i have seen her so many times. I was trying to tell her how happy I as about the SDN concert being on the box set DVD, so I could finally watch SDN at home in America. But I just couldn’t get it together (CK fail!) I also told her that I will cheer for Chaki after SDN 1st phase is over! Oh, and I wished her a happy birthday as well. \o/

Akiko (SDN 2nd Gen): My first time actually talking to Akiko, although I have done a few high-touches with her. I told her how cute she looked, anthat she was my favorite in “Tamanegi”. Her response was amazing! She slowly responded “Hontoni???” and put her arms over her head like in the PV. I of course followed suit. Great first handshake experience! Finally…

Chen Qu (SDN): I always greet her with “Niihau”. I wonder how good her English is, since she spoke it to me the entire time. I forget what I said to her since I was so exhausted, but she is always very nice, and beautiful as ever! BTW, Machiko was next to her, so I spent my queue time spying Machipai’s bewbs (hehe).

After that is was tome for the 20 minute walk back to the station and the 40 minute ride back to Tokyo. It was an awesome, yet exhausting experience. And of course unforgettable. This was just my first day in Tokyo. I am here for two weeks. Hopefully I will have more fun stuff to report.

I received an email from someone with an interesting question.  How can the big fans afford to buy so many CDs over and over again.  Personally, I do it twice a year.  But many fans in Japan do it for every single.  This was my response…

I dont do it every time since I don’t actually live in Japan. I just travel here for the occasional handshake event. This trip is my 7th and 8th such event. ( 29 CDs foir AKB-Kazefui and 13 SKE-OkieDokie) Plus I have been coming here to see AKB for 4 years now. Last trip I had 24 copies of Sakura no Ki ni Narou and 5 copies of the album. I actually threw away 19 of the singles. I’m not sure hany copies of these particular cds I will actually keep, but they are hell to carry so I doubt too many.

I give away some to friends. Sell some of them online, plus I sell some of the photos. It doesn’t take much to make a portion of the money back, but not all. A small price to pay to go to the events. Think about it, is it worth it to pay $300 to have Wasamin tell me she loves me all day? Not to mention getting good facetime with a dozen members? At the end of the day it really isn’t about the CDs at all.

You see all sorts of people at these events. Some of them buy 1 or 2 CDs, see their favorite member, and go home. Some buy hundreds! You see them with these HUGE stacks of tickets.  How can they afford it over and over again?  To be honest, I haven’t got a clue!