A relatively new tradition, on Monday I switched to a different hotel in another part of Tokyo.  I would have a few hours of limbo time before I could check into the new place, so I spent it doing a little shopping and checking to see if I could find tickets for Momoiro Clover Z on Wednesday.  My ticket search was unsuccessful, but I did manage to pick up a few Wasamin photos and the new French Kiss CD. 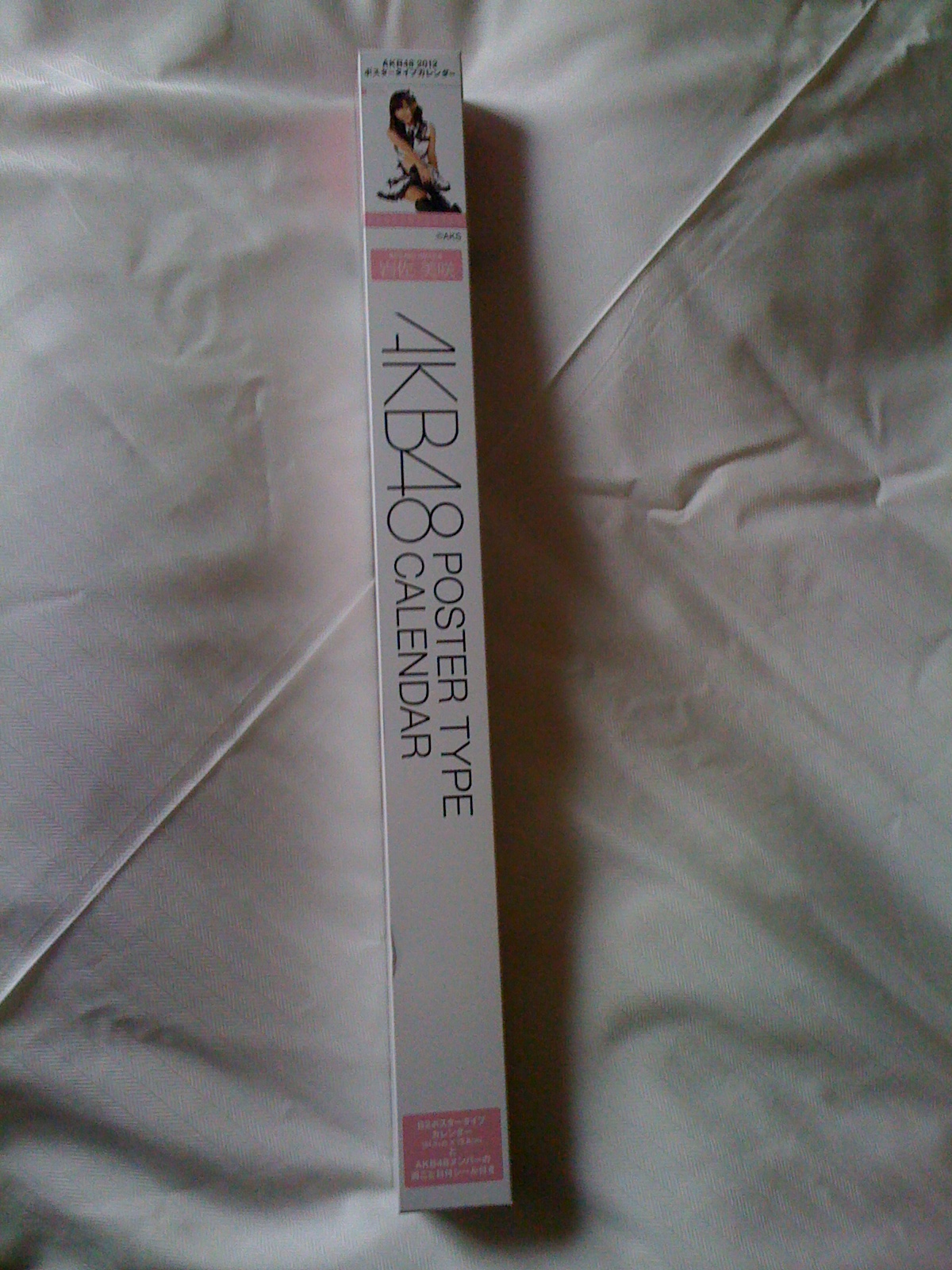 By the way, last week I had pre-ordered Wasamin’s 2012 calendar.  I just hope I can get it home in one piece.  Space in my luggage is at a premium, and things like this always manage to get a little “ruffled”.  Hopefully the box it came in will withstand the trip.

Anyway, I checked into the new hotel.  It is one that I have stayed in many times before.  But never like this!  I was really excited when they told me they were putting me on the top floor of the hotel.  I got to my room on the 32nd floor and opened the curtains… 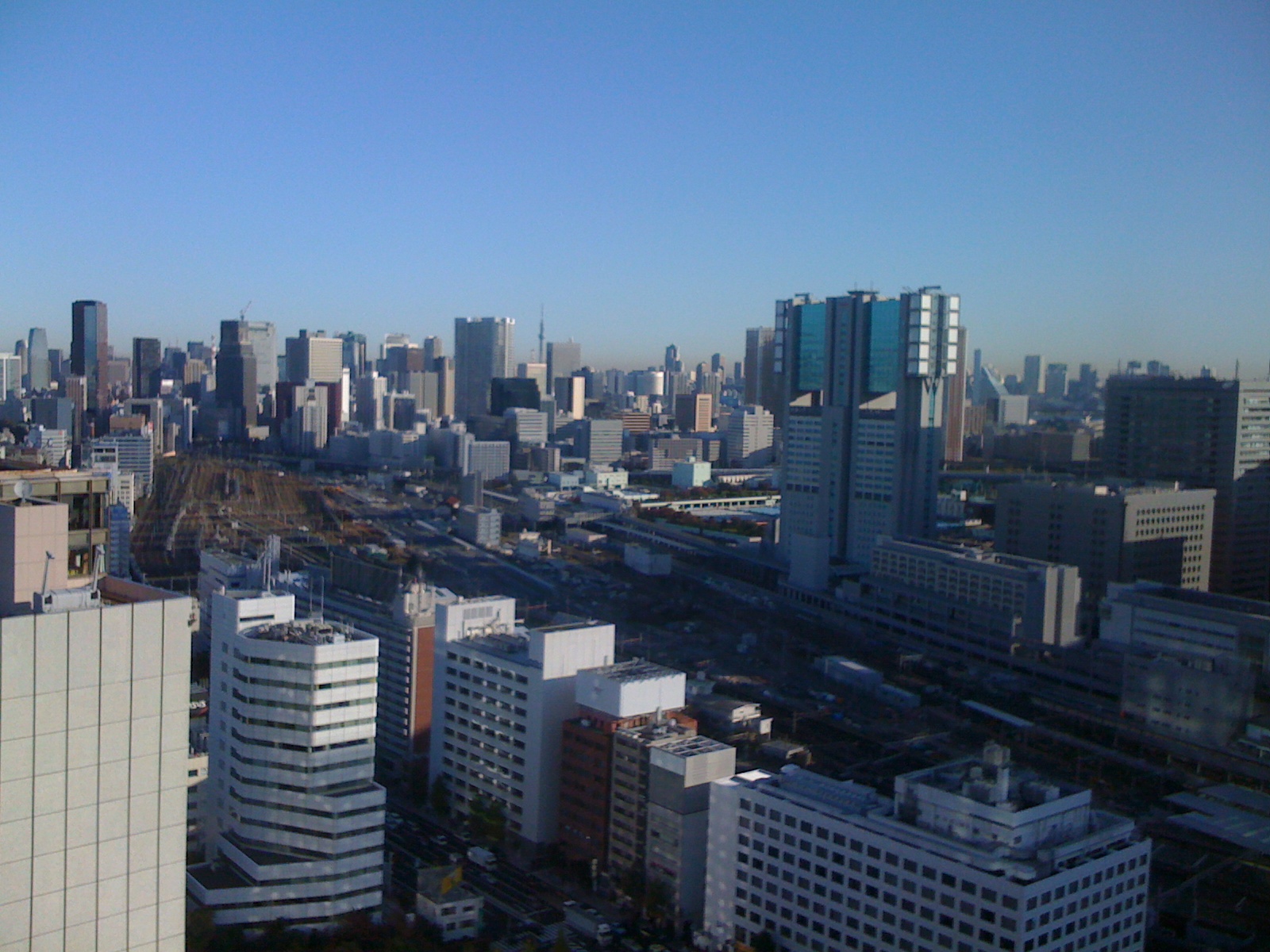 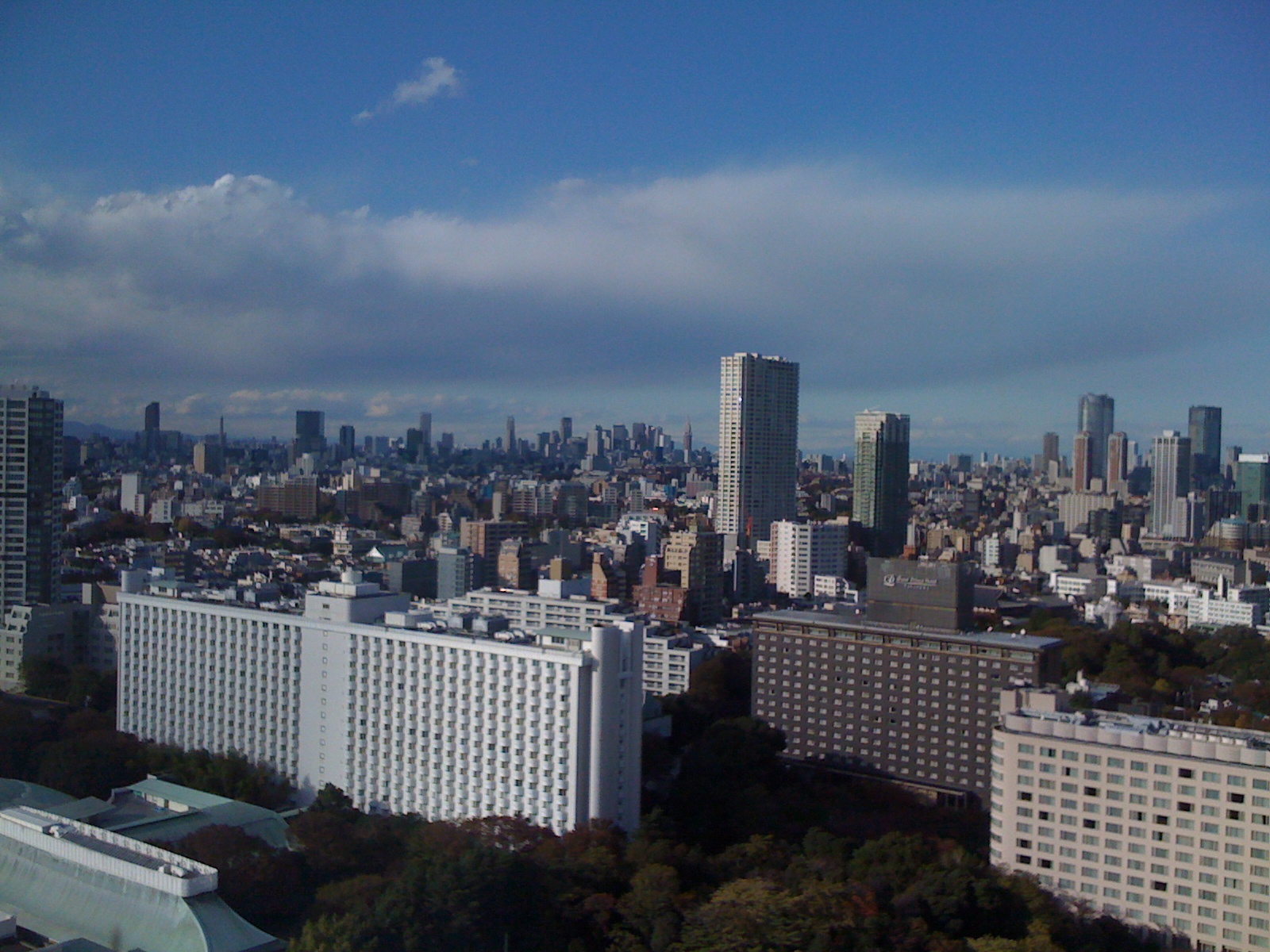 Wow, what a view!  I can see everything from here!  Tokyo Tower, Sky Tree, part of the Rainbow Bridge.  Downtown Tokyo.  Even a little bit of Tokyo Bay.  It is an amazing view.  I wish my camera took better photos at night, because seeing Tokyo from this vantage point has me in complete awe!   I could sit up here for hours and just look out the window, but there is more fun to be had… 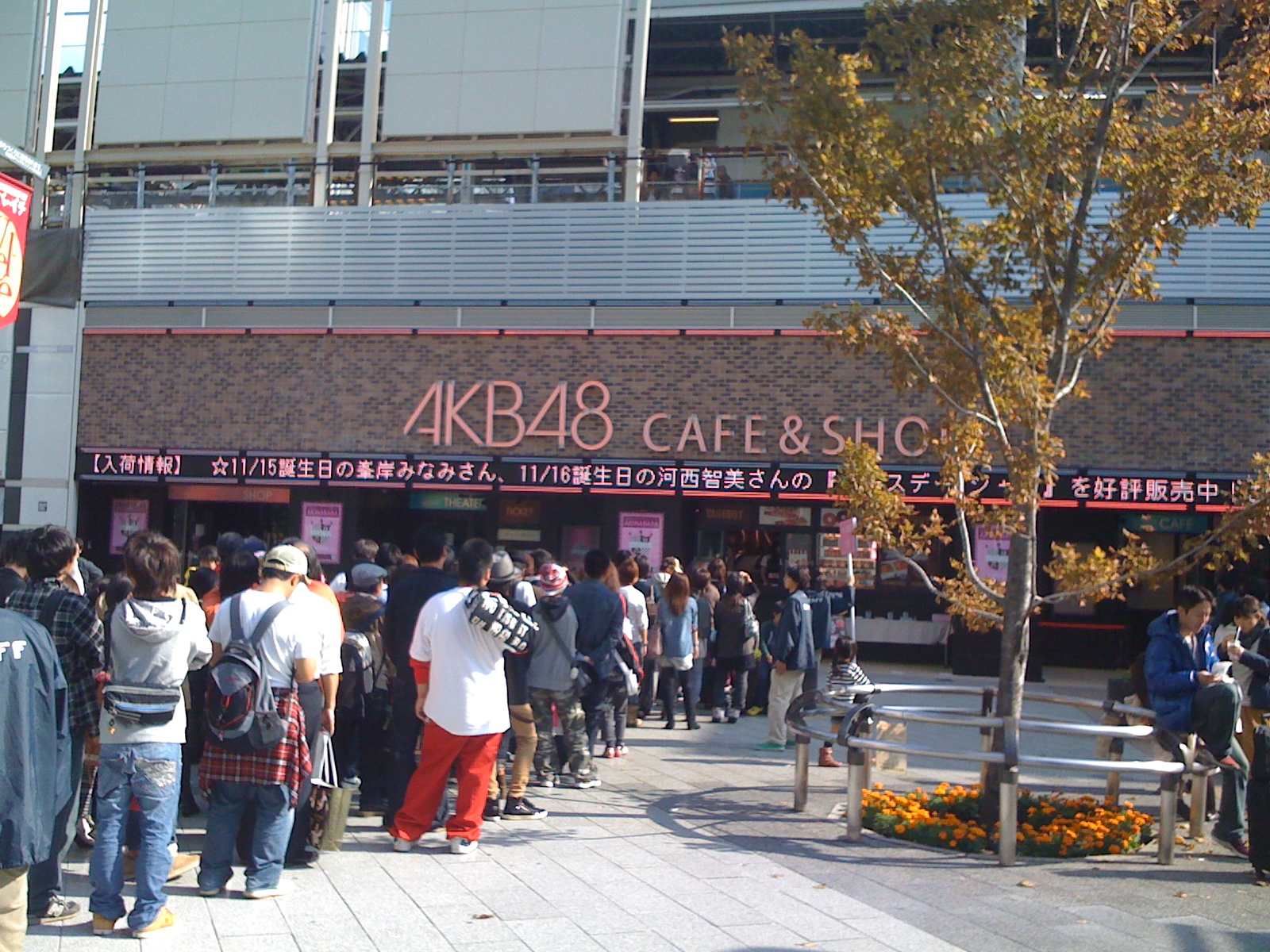 I actually visited the shop portion of the cafe on the first weekend I was here.  I didn’t get the chance to sample the cafe or the cafe theater until this week.   Overall I think it is great!  By the way, reservations aren’t required. You can just queue up for the cafe and shop. As for the theater. You can buy same day tickets at the box office for any show that hasn’t pre-sold out.  Your best bet is on weekdays during the day. Evenings, Weekends and Holidays are MUCH more crowded.

The shops (there are two, one on each side of the cafe) don’t have too many items. Just random collectibles like phone straps, t-shirts, buttons, coffee mugs, t-shirts. They do have some of the latest dvd/cds. But if you are looking for that stuff you are better off going to the official shop in the Donki. They also seem to carry leftover goods that weren’t sold from events, like microfiber towels.  I haven’t purchased anything from the shops at this point.  But tomorrow I might grab a couple of things I have my eye on.

I finally took the opportunity to check out the cafe on Monday.  It has more than just the 2000 yen set menu they advertise.  The menu is very cute, with pictures of the girls “recommending” certain dishes.  Instead of the full set, you can simply order an entree (most are 980 yen)  They have a many to choose from, more than you see on the website. I got Yakisoba with beef.  I also considered the Taco Rice (Yes, Taco as in Mexican food.  Not Tako as in Octopus) The entrees come with your choice of six appetizers.  Vegetables, Fish, even Onion Rings or Garlic Fries!  Plus, certain beverages come with a commemorative coaster.  You get your coaster by blind draw.  I ordered a Pellegrino, and the waitress came over with the coaster dispenser.  It looked sort of like a playing card “shoe” at a blackjack table… 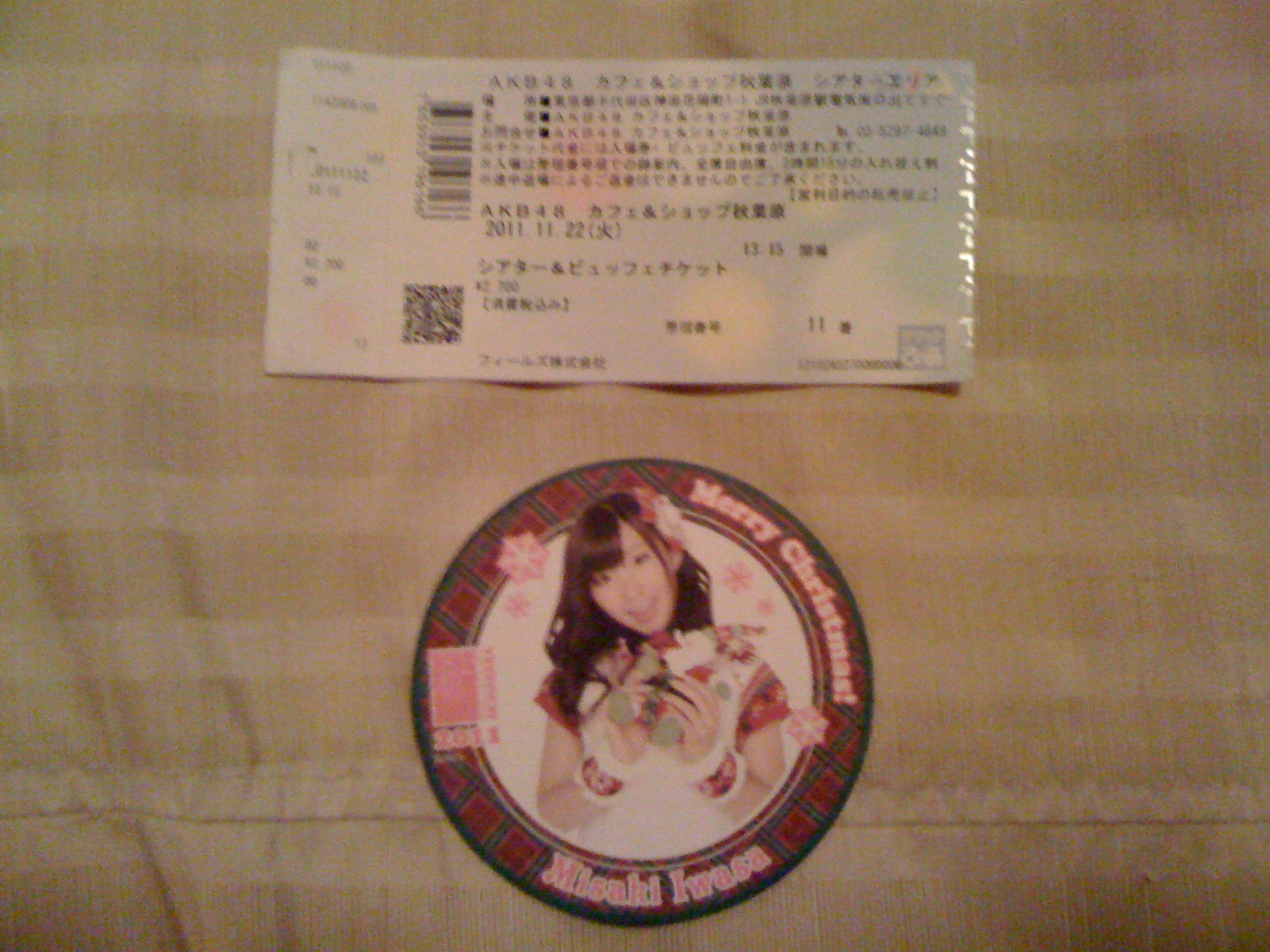 First shot, I got Wasamin!!! Food is decent, and the atmosphere is totally fun.  They are playing AKB48 PVs on the monitors, and the wait staff is all “idol-cute”.  They have a “no-photography” rule there, but they are a bit lax about it as long as you aren’t photographing the staff or the other patrons. 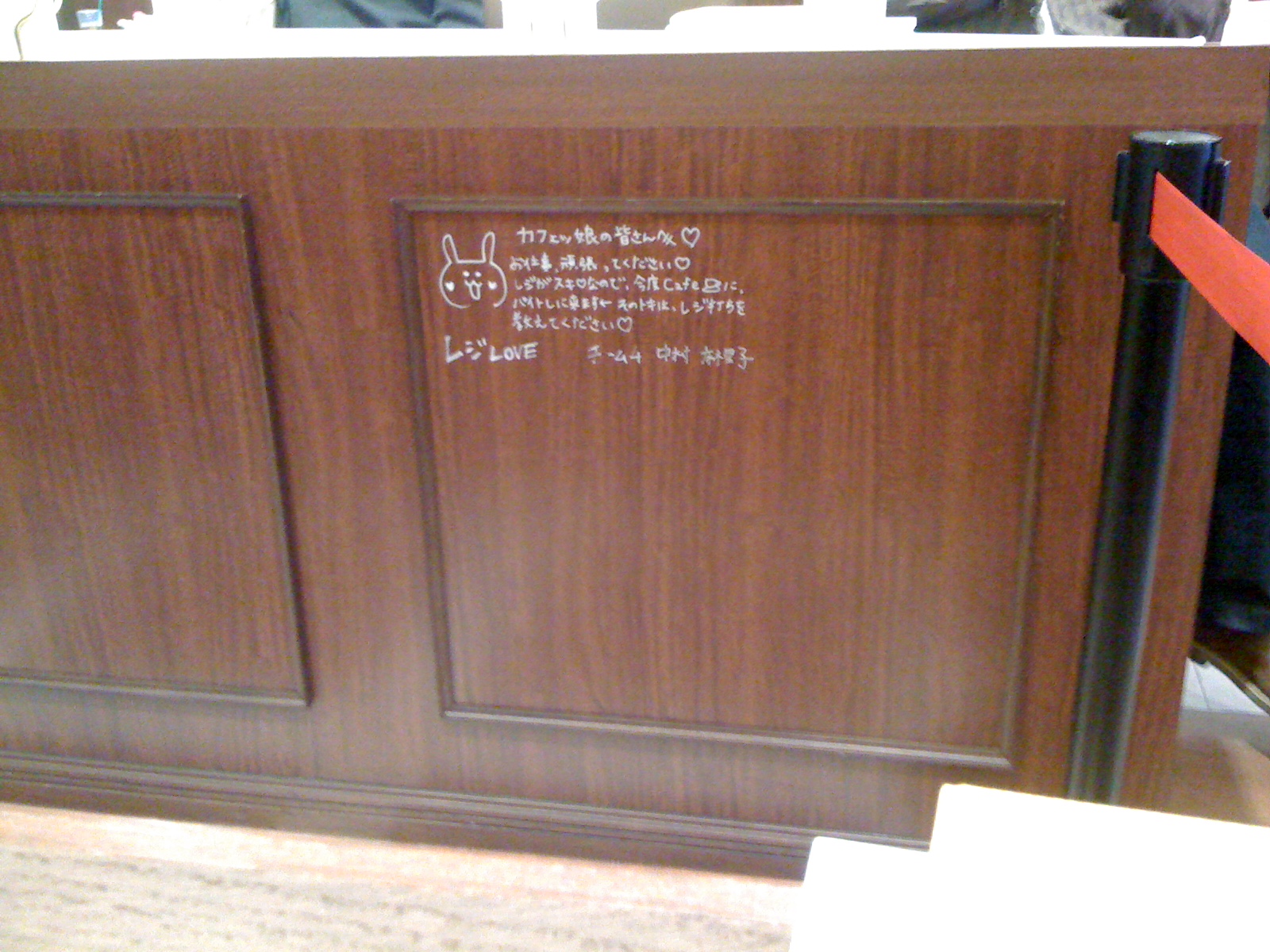 A shot of one of the girls’ messages.  They are all over the place.  On tables, walls.  Everywhere!  A very nice touch!  However, to me the real gem of the place is the AKB48 Cafe Theater!

The theater has five showings per day.  You can check the schedule to see what’s playing.  For the most part they replay recent shows from the AKB48 theater.  But they also show concerts.  One of the popular programs they have been doing this month is AKB48’s Summer Concert in Seibu Dome.  The DVD isn’t going to be released until December, so this is like a sneak peak. 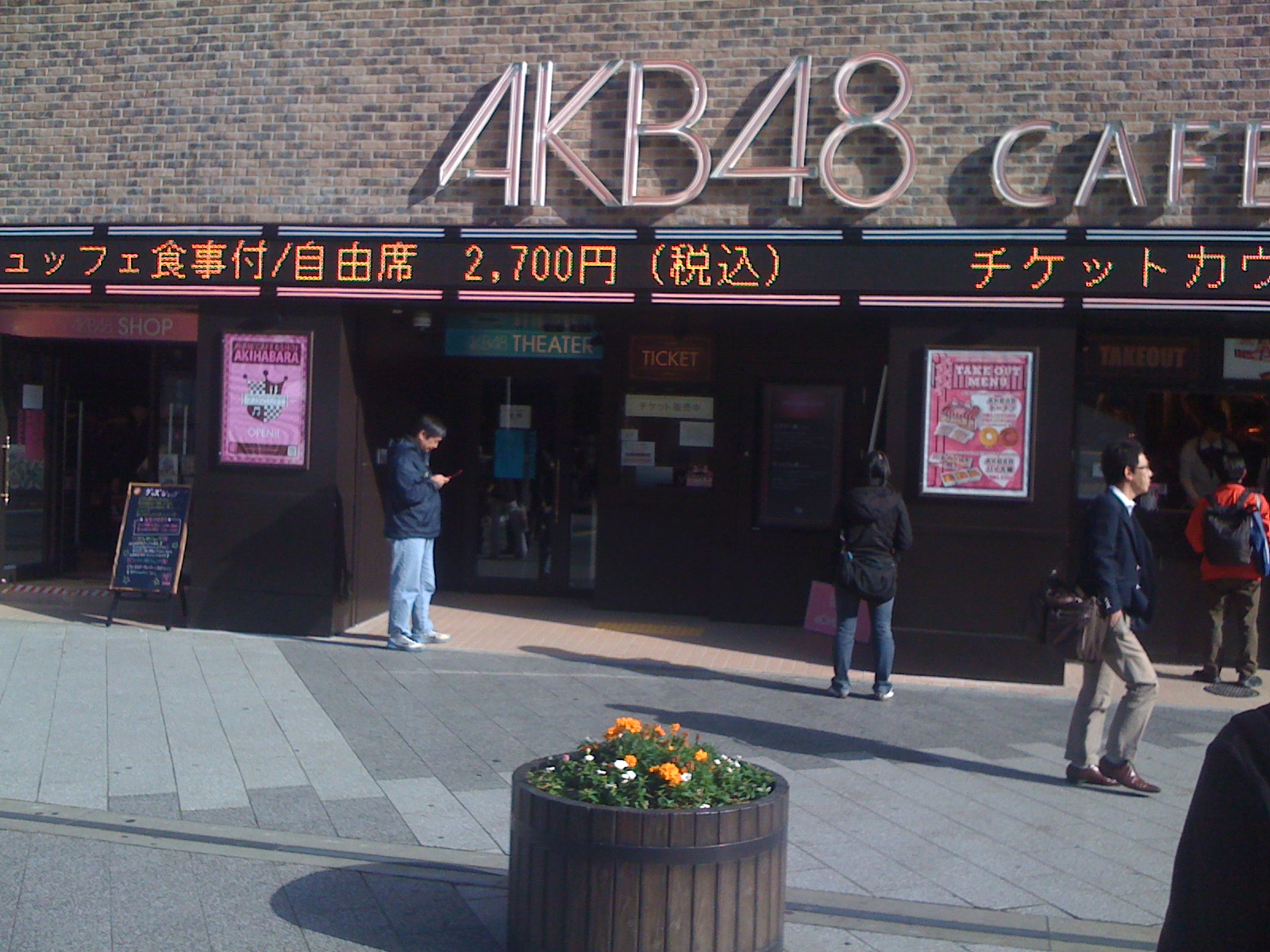 The cost for attending a show is 2700 yen, and includes an all-you-can-eat buffet.  That may seem steep, but after experiencing the place firsthand I would say it is totally worth it!  Like the cafe, the theater girls are adorable.  They put on a little presentation for you which begins as you queue in the square outside.  After they welcome you in and you find a seat they serve you a first course.  For us it was chicken wings, fried rice, potato salad (which was really good!) and a small burger patty with “48” drawn in ketchup. After that it becomes all you can eat, and they have a lot of different items to choose from, including dessert items.  I had the fried chicken, pasta salad and fried rice.  For dessert they had cakes, and choux creme.  Very nice.  You also get to help yourself to the beverage bar.  After about 5-10 minutes the theater girls present the program for you.  Very cute.

As for the show itself, the video/sound system is great, and the seating is very comfortable.  There were about 15 people there, and I would say the entire place seats 60-80.  The entire place feels very new, which is nice.  The video/sound system is great!  It really is like watching a movie at a small theater.    I loved the concert.  The stage setup was amazing, and the setlist for Day 3 was solid!  I was considering skipping this release, but I may change my mind after watching this!

So there ya go, the Cafe, Shop and Theater.  To me it is well worth the visit, especially the Theater.  My recommendation would be to pick a program that you want to see, and go for it!  You can check the schedule on the official site!

My trip is winding toward a close.  Will I have anything more to report?  We’ll see XD