As I said on my last post I want to begin writing on this blog again.  I have been brewing up a particularly venomous post regarding the reactions to the latest AKB48 scandals.  But I have usually stuck with positive posts, so that particular entry may not see the light of day.  Anyway, as I predicted the Miichan controversy has already died down.  We’ll see if there is anything to this supposed Yukirin story.

I have not booked a trip over to Japan this Spring.  I have opted instead to wait until early Summer for my next visit.  This is due in part to AKB48’s crazy handshake scheduling.  Can you believe they are still doing UZA handshake events?  Eien Pressure is already old news and they haven’t even started that one yet!  I have opted for the So Long events, which will be happening around 4 months from now.

But I never completed my report from last Fall.  I mainly focused on the handshake events.  But I didn’t really touch on some of the special things that happened this time around… 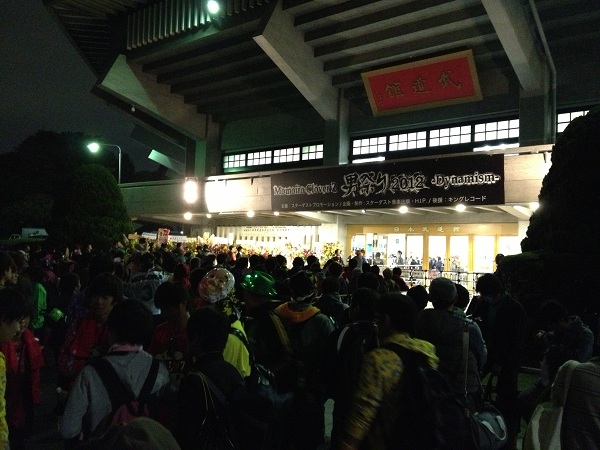 I had been relatively unlucky when I came to Momoclo Z.  At least when it came to seeing concerts and obtaining tickets.  I DID happen to run into the entire group walking down the street last year.  But as far as a performance was concerned I hadn’t seen them since Pinky Jones was their new single.  That’s two years almost to the day.  But my friend Peter and I tried our luck at the ticket lottery, and sure enough we pulled it off.  I was finally going to see Momoclo again, and at the legendary BUDOKAN!  With all of the trips I have taken, I had never been there.  So I was doubly excited!

We decided to head over extra early for goods.  The trouble was that I had spent the previous night shivering from fever.  Plus, it was cold and rainy.  It took plenty of medication, an endless supply of vitamin C, and every bit of strength, but I was going to make it through this day.  I missed a Momoclo show in 2009 because of the flu.  It wasn’t gonna happen again. 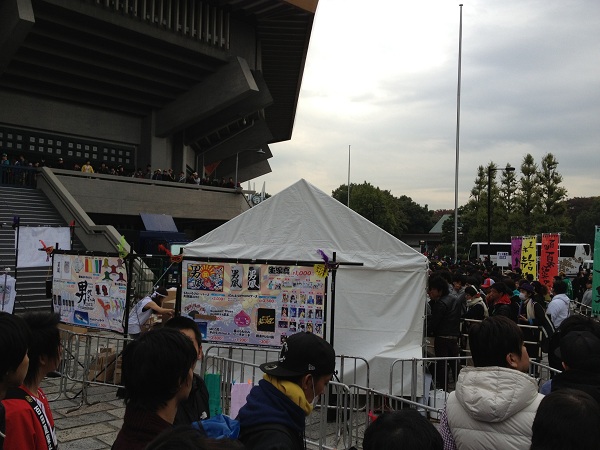 We decided to get into the monstrous goods line, which stretched all the way around the venue, down the stairs, then down the road, then into a courtyard near the park entrance where it looped around 4 times.  I had no idea what I wanted.  But after 2+ hours of queueing I decided to go hog wild and picked up the Tank Top, a Momoka Oshi Towel, a light stick and a cell phone case.

After a pasta lunch we decided to people watch for a while.  This was Otoko Matsuri, which meant “No Girls Allowed”.  However, that didn’t stop legions of female supporters from parading around the festivities.  That’s okay, the girls had Onna Matsuri the previous month.  And I am sure there were plenty of jealous guy fans hanging around the venue that evening. 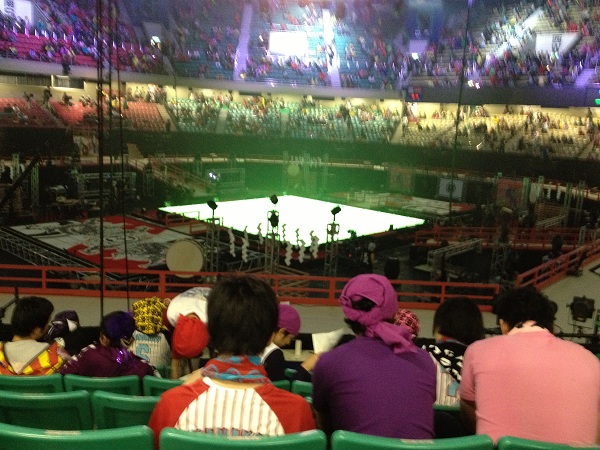 We had 6th row seats on the first level above the floor.  They seemed like decent seats, although we had no idea what the stage arrangement would be.  So we were totally jazzed when we saw there was no floor seating at all, and there was a stage ramp all around the venue.  So 6th row 1st level actually was 6th row!  We would actually be pretty close to the girls!  Oh, and just before showtime Yamachan showed up to huge applause!

What an awesome looking stage!  The floor also doubled as a screen.  The show opened with the girls “drawing” Otoko Matsuri on the floor with giant paintbrushes.  There was so much around the stage floor, we had no idea how they were going to utilize all of the space.  Then came the Momoclo Z Overture.  By the way, I love their intro!  I remember when they were an indie they would come out to the Universal Music theme.  But what they do now is totally insane. Frankly, it blows the AKB48 overture away!

One amazing thing about this setlist was the amount of “old songs” performed.  Saikyou Pare Parade is one of my favorite old songs they perform.  Shortly after came Supergirl, along with Momoiro Punch and Mirai e Susume.  But what I really wanted to hear were some of my new favorites! 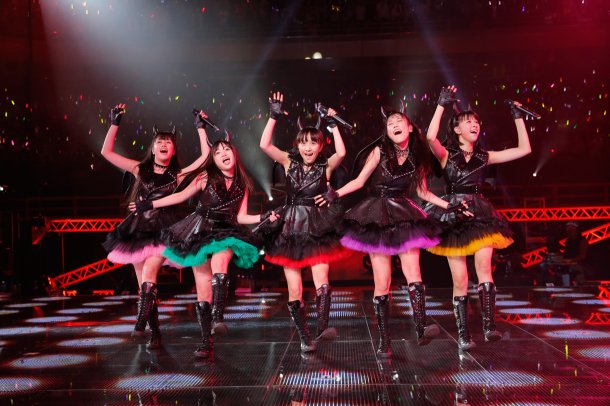 Unfortunately for me most of my faves didn’t get performed that night.  But they DID do Bionic Cherry, which might be my favorite Momoclo song of all!  The real fun was in all of the shenanigans going on between the songs.  This was Otoko Matsuri, so they filled the show with stuff “guys like”…I guess.  Ninjas, bodybuilders, taiko drummers, judo masters, pro wrestlers.  At one point just before the encore Momoka took a huge header down a ramp.  You could tell she wanted to cry, but Shiori grabbed her, dusted her off and our little giant got back to business.

By the end of the show my fever felt almost completely gone.  Even so I was really looking forward to hitting the sheets.

I must say I enjoyed the show immensely, even if they didn’t perform a lot of my favorites.  It is so interesting the way the idol phenomenon works.  Here is a group I used to go see when they had trouble getting 25 people to watch them.  And it was so much fun!  The interactions we got to have with the group were amazing.  Autographs, two shots, the girls feeding you lunch…

But now they have grown up and have become a huge success.  It is so bittersweet.  I am happy that they are doing so well, but the good old days are gone for good.  Now they play in huge venues and events aren’t nearly as intimate as they used to be.  This is the way of the idol world.  Like with AKB, most of the original fans are probably gone.  Once the masses discover an idol act, it changes everything. But it’s inevitable. Even though the newer fans will never really get to experience a big part of what was so special about the group to begin with. Oh well.

Pardon me while I go reminisce over my old Momoclo 2-shots and autographs.  Momentos from a time gone by. I just hope it isn’t another two years before I get to see Momoclo again.