After all of the fun I have had this trip, the one thing I still hadn’t done was won a theater show. The tough part was with the Nissan Stadium show, most of the theaters were closed for the bulk of the week. That didn’t leave me too many chances to win. There was Komori’s final stage. I really wanted to win that, but no such luck. Anna Ishida’s birthday show? Got skunked on that one as well.  It came down to a select few shows…

This is my 11th time in Japan, and I have never come here without winning at least once. Would my lucky streak come to an inglorious end?

I finally got the good news when I returned from Nissan Stadium on Saturday night. I had won via Ippan to see the AKB Kenkyuusei and the 15th generation’s debut.  This was going to be great.  I was getting a first look at AKB48’s newest members in action!

I met Koba and Pandadash in the afternoon. Our plan was to hit the Sousenkyo museum , and then I would cut out for my theater show. When we got to the museum the line was super long. I seriously considered bailing on the museum (I have already visited once) and just get my theater ticket. But I stuck it out since they have a bunch of new post-election exhibits. I will post about the museum later. Finally at 5:15 I jetted out of the museum, and jumped across the street to the Donki.

Paid for my ticket, #154. I jumped downstairs for a quick smoke where I met a couple of young fans who also love Wasamin. I love this Sousenkyo t-shirt I bought at the cafe! I have been wearing it everywhere and getting endless comments and thumbs-up. Anyway, I wished them luck on the entrance lottery and headed back upstairs. 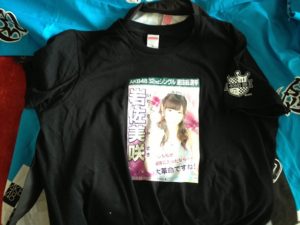 Went though the usual formalities with the queuing process. In fact I saw a bunch of what looked like parents being led in as special guests.  I am thinking these were the moms and dads of a few of the new girls.   But now it was time for the lottery. First up…
150-159. Oh hell yes!!! First row again! This was my 31st theater show. For my first 27 I never made it closer than 4th row. But three of the last four have gotten me a 1st row seat. And this was the second time I have been front row center. This show was going to be awesome, except…

I am not as well versed in the kenkyuusei as I should be. Sure, there are some that I know about and like. But the majority of them are a mystery to me. Throw in the 15th gen debut, and I was seeing a lot of girls I knew nothing about. This could be a huge problem with me in the front row. I better figure them out quickly, or I am going to feel like an idiot. So here was the plan…Pay close attention during the opening set, listen attentively during MCs, and go from there.

Show begins, the crowd is giggling because they screwed up the opening chant in Shonichi. Right off the bat, Miki Nishino is in my face. 30 seconds in and I already love this girl. But I knew she wasn’t a new member. I spent the first two songs wondering which were the new members. I knew Komiyama Haruka was new since she was so unique looking. But what about this super tall and skinny girl? Was she new? She keeps trying to get my attention. There is one gangly looking girl, and what about this intense looking one? Then I found her…

One girl kept looking at me. I wasn’t sure if she was new or not. But I thought she was extremely cute. Just something about her made me want to pay attention to her the entire time. Not too young, but a very pretty face…

During opening introductions Miki took the lead. Now my first reaction was to go for her. But I could tell she was extremely popular. I like underdogs. The tall skinny one who keeps looking at me? Maeda Mitsuki…not really my type. Super-intense girl? Okada Nana. And the foreign looking girl? Shinobu Mogi. So now I knew who the players were. Oh yeah, the one I was totally into???

Tsuchiyasu Mizuki. Oh wow, she is brand new. I am going to have fun with her tonight!

On to the units, and I was having a great time playing with any girl who landed in front of me on stage. I was pointing, doing the hand motions, cheering, doing all I could to get their attention. Although it is pretty easy for someone like me. Big gaijin with a goatee, not to mention my Wasamin shirt. I might as well have been wearing a neon sign. Then came Kogami no Naka no Jeanne d Arc…

Oh my, my new love is already centering a song! Yeah, she is good. I am totally focused on her, and she is totally focused on me. She couldn’t stop looking my way. For the rest of the show it was more of the same. Not to mention other members were also looking right at me, and I didn’t want to be rude. Maeda Mitsuki had her eyes on me all night as well.

Now I am sure many of you want to hear about the other 15th gen members.

I’m sorry, Owada Nana must have been off of my radar, because she was indeed there. Struggling to remember. I believe I thought she was cute, but I was thinking she was 14th gen. 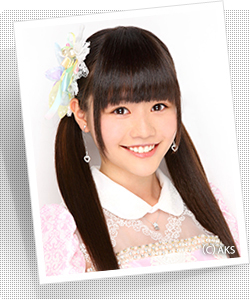 I already mentioned Komiyama Haruka. Very cute, always smiling. She will be great after she gets more comfortable.
Yumato Aimi. Reminds me of Haruu. Not my type at all.
Fukuoka Seina is a lot like Nakky looks-wise. But kind of quiet.
Ichikawa Minami was very good. I was surprised she was a debut member.
Mion and Kiara were both very cute, but look extremely young! I try to avoid the baby-girls

That said, they all did a great job with the performance.

Anyway the rest of the night was me looking at Mizuki, Mizuki looking at me, me trying not to look at Mizuki. Looking at Miki, looking back at Mizuki since she is looking at me. For me, being in the front row means I want to make as many of the girls feel acknowledged as possible. And with the 15th gen, I wanted to carry them through the show. Not that they needed it.

The setlist finally ended with Sayonara Crawl. I screamed “Omedetou!” to the 15th gen and Maeda Mitsuki nodded to me in approval. As they left the stage every girl came up to me at one point, Mizuki found me twice. But not to be outdone, Okada Nana came up to me and blew me a kiss! (???) Then came High Touch…

once again, there are times when it is great to be a foreigner. High Touch is one of them. At least half of the girls exclaimed when I came by them. Nana held my hand tightly, as did Miki. they were all great, but I was looking for one girl…

She saw me coming from two girls away. I slid by the two girls in front of her (not sure who they were, sorry) and gave Mizuki a big congratulations. It was a great interaction! Her reaction was just as awesome! I am so happy that I got to be her first major fan experience. In fact I feel so lucky to be able to make such an impression on the 15th gen in their debut! The bummer is that I go back to California in 2 days. I would love another chance to interact with Mizuki. Oh well, it will have to wait. Hopefully I get back to town soon. And if I do, Mizuki will be on my handshake shortlist. Nana and Miki may make the cut as well!

Just don’t tell Wasamin I was looking at other girls!

EDIT: Ya know, I forgot to put anything of real substance about the 13th-14th Kenkyuusei in the show… 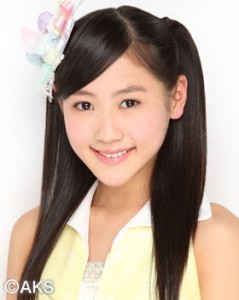 Nishino Miki: was my favorite to watch. She clearly reminds me of Jurina when it comes to skill and intensity. She commands your presence and is great at interacting with the audience. She was in front of me quite often and I enjoyed her performance immensely.

Okada Nana: My first thought was that she was sort of intense and introverted, kind of like Tomochin or maybe Mariko. Very cute, and the more I watched her the more I liked her. And of course she did seem to react to me quite well!

Maeda Mitsuki: My first thought was that she wasn’t my type of idol. Kind of reminded me of Yurina Kumai from Berryz Kobo. But she is super-genki and energetic on stage. Paid a lot of attention to me as well, so I will give her props for some excellent fishing-work!

Aigasa Moe: Gets a lot of attention from the fans (and the other girls) for being super-cute.

It was another awesome theater experience.  I am so happy!  I am coming toward the end of my trip.  Hopefully I can find a few more idol-ly things to do before I head back to California.

1 thought on “CK in Japan, Summer 2013 Pt. 2…Experiencing the Freshest of Idols”