I felt re-energized on Monday after finally catching up on some needed sleep. It’s unusual for me to have a weekend day in Japan with nothing to do. But on Sunday I felt really out of it. So the best thing for my body was to merely rest. I have a big week coming up to get ready for…

In the meantime I had another warm up event to attend. I remember how sad I felt when SDN48 graduated in early 2012. I wondered if I would ever get the chance to talk to some of my favorite members ever again. To this day I still follow a few of the members’ blogs. I like to see what they are up to, especially when I have a trip coming up. So I was really excited when I realized tonight’s event would fall right into my trip window… 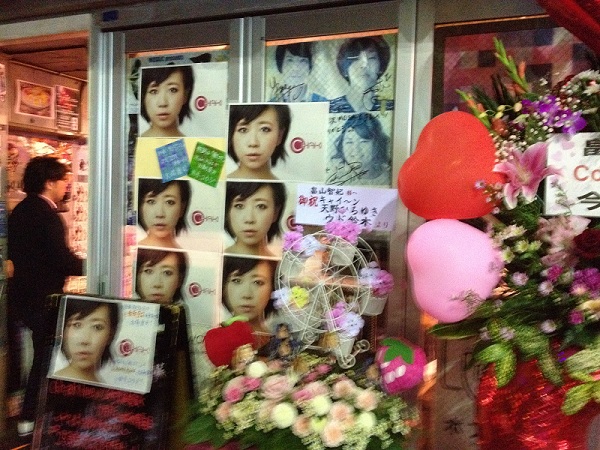 If it wasn’t for Meetan, Chaki would have easily been my favorite member of SDN48. I also adored Akiko (keep that fact in your pocket, it’s gonna come up later in the story) But Chaki…There is a reason her nickname is “Babyface”. She is sooo cute! It is amazing that she is turning 25 today. She still looks like a teenager! She was also one of the best singers in SDN. And boy, could she dance! I had trouble keeping my eyes off of her whenever I went to an SDN show. Anyway, I was going to get the chance to see Chaki up close for the first time in two years (Next Encore concert doesn’t count since I had nosebleed seats) 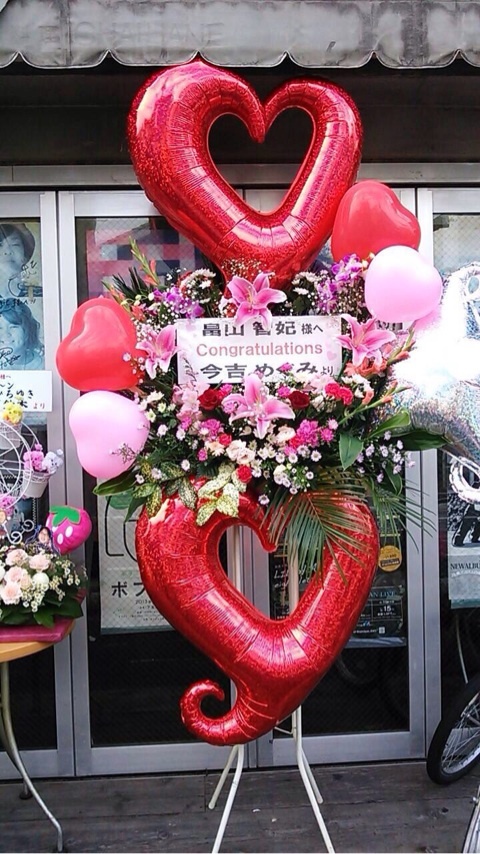 It had been drizzling all day, but had seemed to clear up in the afternoon. I went back to my hotel to a) watch Wasamin perform on TV Tokyo, and b) strip out of my cold weather gear for the show. I took off for the train station under partly cloudy skies, but much to my surprise it was pouring when I arrived in Shimokitazawa. I figured I would be okay if I hurried to the venue. But I got lost. It took me three blocks and a severe drenching before I could find an umbrella. At that point I don’t know why I bothered since I was totally soaked. Eventually I found the club.As promised the were selling tickets at the door. In addition they had goods, and you could preorder her solo debut CD. There were extra bonuses if you reserved multiple copies, but it wasn’t releasing until a week after I leave. I picked up a Chaki oshi towel (mainly to dry myself off) and headed into the hall.Like every other club in Shimokitazawa, the room was tiny! Smaller than the AKB Theater, and much narrower. There couldn’t have been more than 200 people in the place. It made the experience feel really intimate. I had a feeling that some of Chaki’s friends might show up too. Moments later I see SDN Alumni Rachel, Hiromin and a mysterious girl in a mask walk in. A few minutes later, Imayoshi Megumi arrived as well. BTW, Megu looks hawt with blonde hair! They took their spots right behind me. Sharing a concert with a few former SDN members…How cool is that? 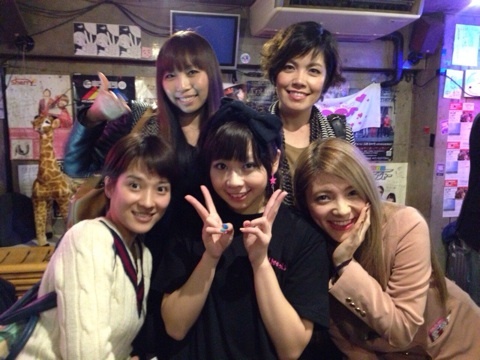 The lights dimmed, and out came Chaki dancing to Tchaikovsky’s Dance of the Sugar Plum Fairy. She looked adorable! I must admit, I hadn’t been a big fan of the short bowl cut she had been sporting lately. But tonight her hair looked a little longer, and very nicely styled. Coupled with her interpretation of the dance she looked sexy as hell. After that her supporting band came out, and she launched into some of her material.I honestly don’t know the names of any of her songs. (I’m such a bad fan) but she was absolutely glowing on stage. She is such a fabulous singer too. Strong vocals, great projection and pitch. She totally feels the song as she sings it. Her songs could best be classified as “adult rock”, but there is also sort of a jazzy vibe to the way she sings. She also has a slightly raspy voice, which is so cute on her. She did MCs in-between every song, and since the room was so small it was really like an intimate conversation with friends. Funny, I used to say that about the MCs at SDN shows. Rachel was also heckling her quite a bit, which made for an even funnier experience.After the first set she began the karaoke portion of the show, one of her specialties. She takes requests from the fans. I know one of the songs she performed was from Scandal. She then performed her upcoming single which was really good. Now I wish I had bought a copy. I’m sure I could have found someone to pick it up for me…

After showing a VTR, which featured friends and family picking which of her hairstyles they felt best suited her, she came out in a smokin’ hawt red dress, with black lace gloves and a choker. The main set ended with her frenetic version of Kudoku na Runner. She invited her former groupmates to join, but they declined. Chaki left the stage, but who would lead the encore???

We all nominated Rachel, who had been rather talkative thrughout the show. She had forgotten how to do the encore, so fans were whispering stuff for her to say. We started our Chaki chant, which soon turned into an altering “Chaki” and “Ha-Takeyama” She eventually returned to the stage in her concert t-shirt and a black bow on her head. For the next big surprise, Chaki sang the next song while playing the piano. I had no idea she was a pianist, and she is very good at it! The show “ended” with another performance of the new single. But there was lots more fun to come…

Two girls came on stage in clown outfits. I have no idea who they are, perhaps comedians? Next came a woman who everyone called “Sensei”. Perhaps one of Chaki’s managers? It turned out the fans had some work to do to create a birthday present for Chaki. The present? A song written by a few members of the audience, to be performed by the audience. The song was called “Chaki-panman” And of course, it was done to the Anpanman March. We went over the lyrics, then did two rehearsals before Chaki came back out.
She was crying by the end of the song. It totally brought back memories of how she always cried at her birthday shows in the AKB48 Theater. I’m not sure what it meant, but there was something in the second phrase of the song that really got to her. The fans that wrote the lyrics got to give her special birthday wishes during the show.The birthday cake finally came out, then her former groupmates finally came up on stage. Whaddya know, the fourth girl with the mask…was Akiko! I had a feeling it was her because of the hair, but he looked noticeably thinner. Not to mention I noticed her eyeing me more than once. Chaki took some photos with the crowd, then bailed upstairs to do handshakes with everyone as they left. I knew Chaki would remember me, and she gave me a big “sashiburi!” and thank you before I walked out the door. But not before I got a special Chaki button from her manager. And that was it, show over! 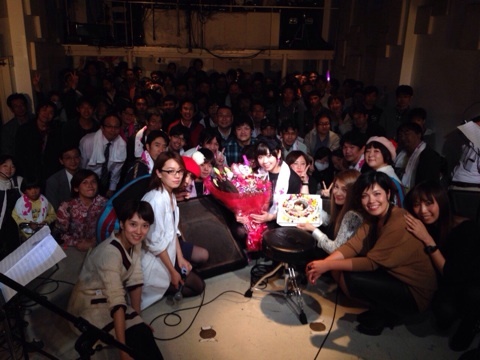 On the surface, it wasn’t a major event. A talented singer with a small fanbase in a tiny venue. But it really brought back emotions from the old days of SDN. It helped that a few other grads were there. Not to mention I had managed to win two of Chaki’s three birthday shows during SDN’s tenure. So in many ways it was just like old times. Heck, I was just excited to be there!

I remember two years ago wondering if I would ever see and talk to my favorite SDN members again. It’s funny how the world works, and I am so thankful for this experience.

And now, my friends, begins the Wasamin release event marathon!