Something else that kept me occupied while in Tokyo was the AKB48 Sousenkyo Museum at Belle Salle Akihabara, right across the street from the Don Quijote.  Last year I thoroughly enjoyed the museum which I described in this post.  I bought two tickets during presale.  One to use immediately and the other to keep in my back pocket in case I got wind that Wasamin was making an appearance.  Just like last year, each ticket came with a Sousenkyo poster as well as the opportunity to purchase additional posters for 550 yen apiece.  Since the entryway to my home is lined with last year’s posters, I was excited to have the chance to freshen them up with the current versions. 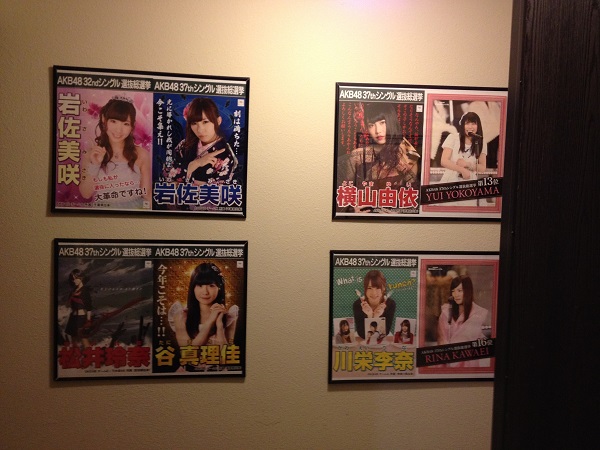 So how did this year’s Museum stack up against the 2013 version?  Let’s head on in and check it out!

The first big difference was the bag check and metal detectors at the entrance.  Since this was less than a week after the Iwate Incident this was all new to the fans.  But it really wasn’t that bad.  In fact I had prepared by only carrying essential items in my bag, so the inspection was very quick.  I might add that the guards were all very nice too.  Upon entering you were given a whole bunch of paperwork.  Last year they had one contest you could enter for prizes.  But this year they had three different contests.

The first contest wasn’t for prizes, it was merely to decide which member had the most artistic poster.  Matsui Rena’s was in the lead for pretty much the entire two weeks of the museum.  The battle for second was between Sayanee and Mayuyu.  Mayuyu?  Really???  Can her fans not take off their oshi glasses for one second?  I must admit that really bothered me.  Mayuyu’s poster was nothing special.  There were so many that were a thousand times more creative and artistic.  Anyway from what I understand Rena’s ultimately won, so there is justice in the world.  And if you are wondering who I voted for? 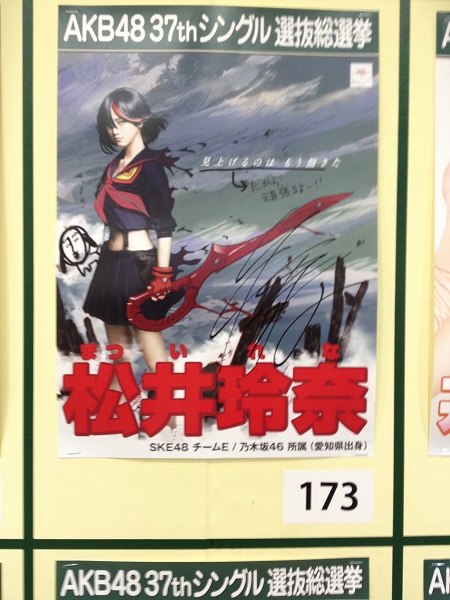 At first I thought I would find the poster of an underdog that I really liked.  Maybe Kaotan?  That was a funny poster.  Mita Mao drew herself as an anime character.  I always love Aamin’s poster.  This year was no exception.  I didn’t vote for Wasamin’s poster either.  Not that I don’t love it, but there wasn’t anything especially unique about it.  Ultimately I voted for Rena each time I visited.  I wanted to make sure Mayu didn’t win.  After all, Rena’s really was the best poster!

The second contest was virtual slot machine.  If you got three matching images you won one of the autograph boards the members signed for the museum.  Needless to say, I didn’t win. 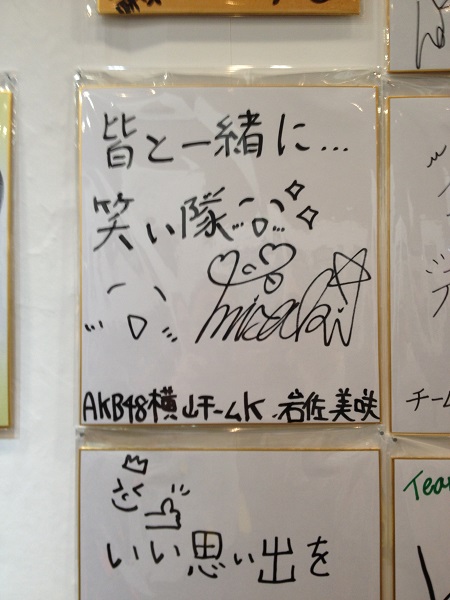 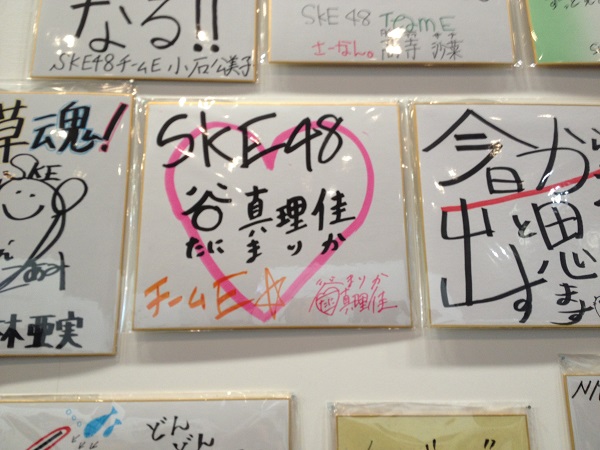 Finally the best, and hardest contest.  A chance to win a personalized DVD message from this year’s senbatsu.  All you had to do was predict ALL FIVE centers of the Sousenkyo teams.  Yeah, pretty much impossible.  And considering Mayuyu won you could probably toss out 75% of the entries.  I doubt anyone won this.  I know I didn’t! 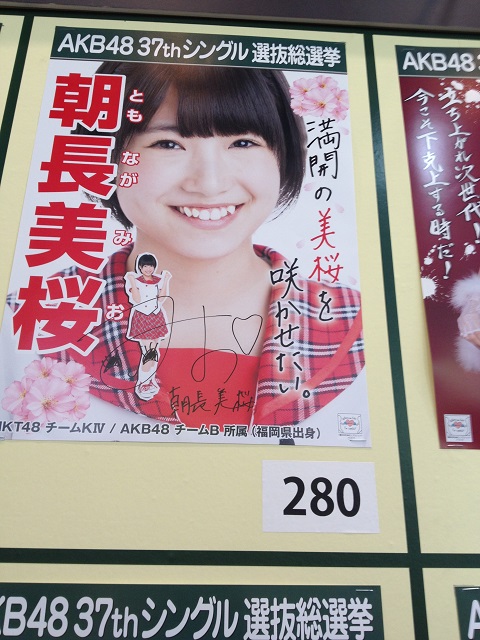 Like last year they had all of the posters on display for the members to sign.  During the first week most of the visitors were from the sister groups, so there were quite a few signatures from SKE and HKT.  Same with the autograph wall inside near the stage. 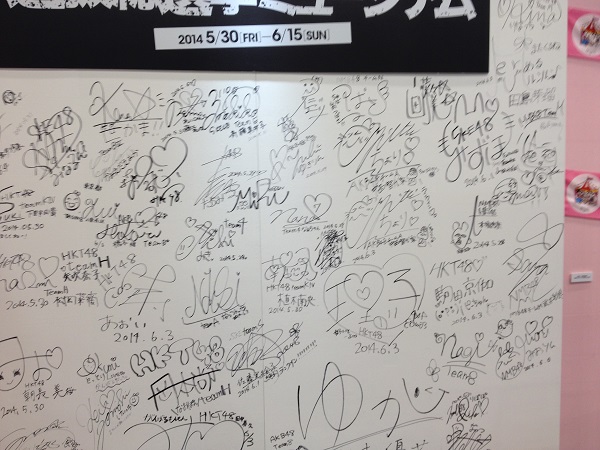 This year there were far more costumes on display.  Not only from the PVs, but from the Sousenkyo photo shoots AND the group’s performance on NHK’s Kouhaku Uta Gassen… 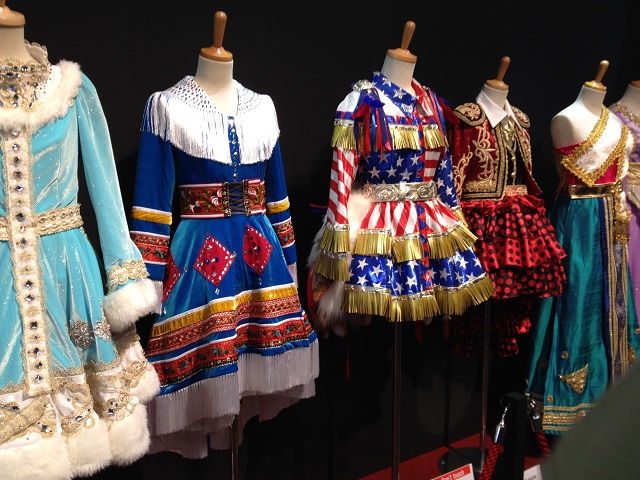 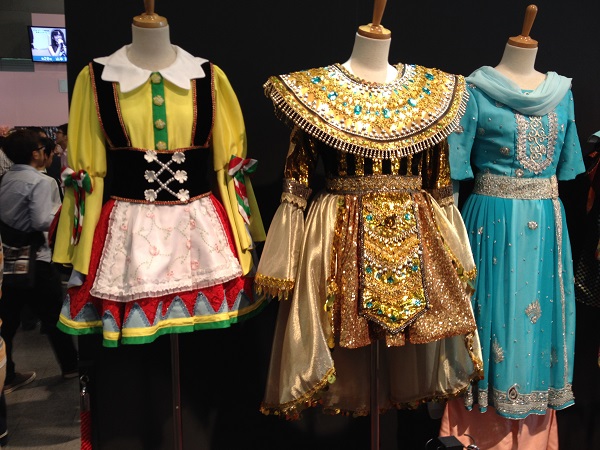 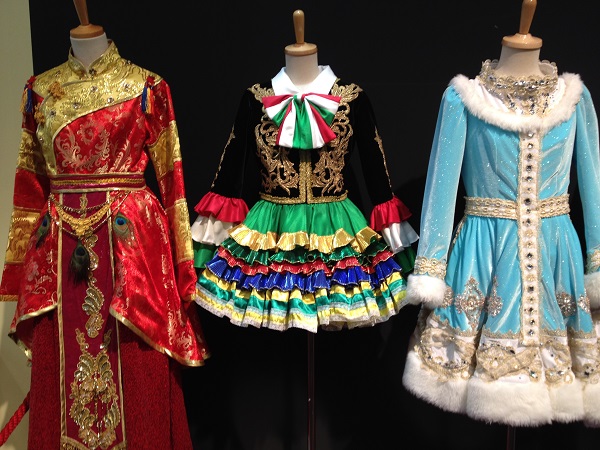 More of my favorite costumes… 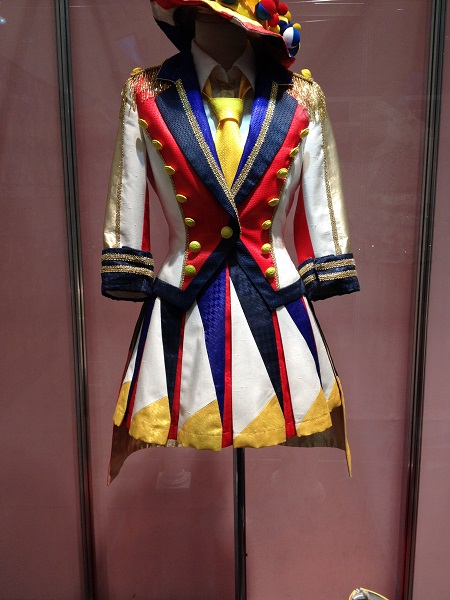 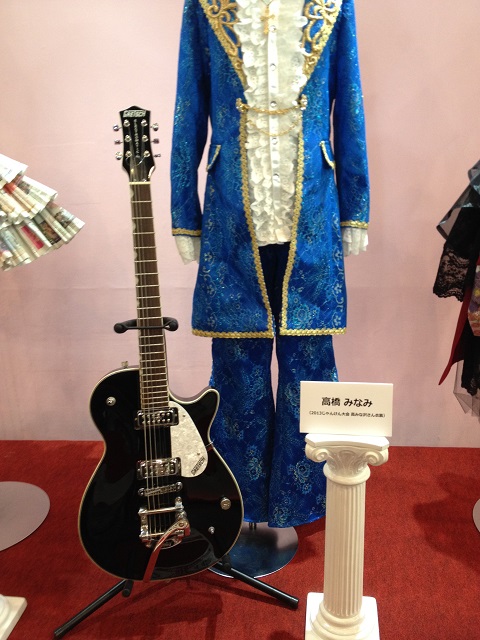 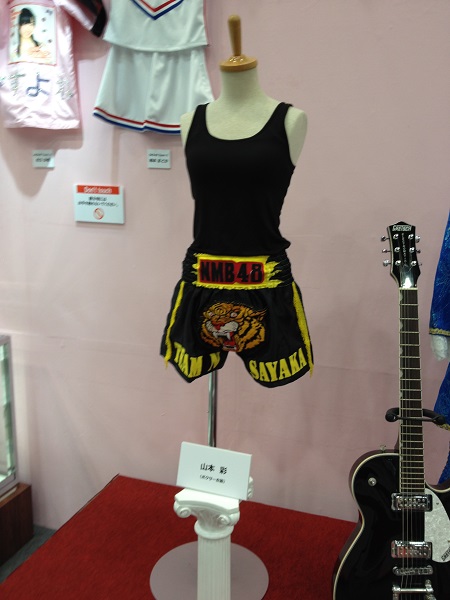 As well as Sayanee’s.  We had an interesting discussion on twitter about the placement of that tiger.  And my favorite costume on display in the museum?

In addition, some of the props the girls used for their photoshoots were also on display… 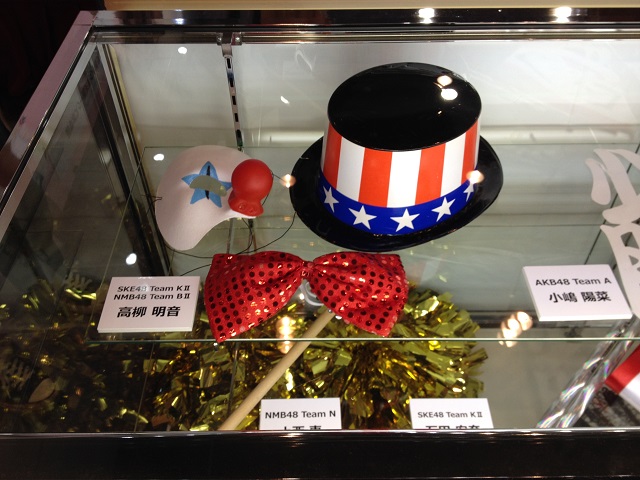 Of course it wouldn’t be a Sousenkyo museum without the “gorgeous” artist renderings of Senbatsu winners past. 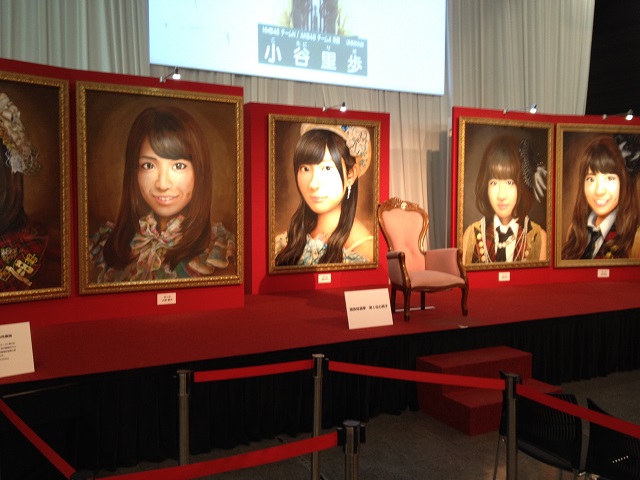 Sasshi’s would be alright if they didn’t mess up her nose.  That Yuko painting in the foreground?  Sheesh!

The awards of winners past.  Where is Sasshi’s award?  I have no idea!  I can tell you it wasn’t on display for the entire first week.  What I did like was that they put them in much nicer display cases.

There was even an area where you could create your own Teru Teru Bozu for the upcoming concert.  (They gave away a pre-made version as a gift)  With the weekend weather forecast becoming more dire by the minute, this seemed like a desperate exercise.  But I wanted to have good karma, especially since I had a very good arena level seat for the show.  So I went ahead and created one with a secret Wasa-message hidden on the inside!

Of course the girls’ appeal videos were constantly playing on the monitors.  I just had to get this shot.  I hope everyone is paying attention.  Wasamin presiding over the festivities. 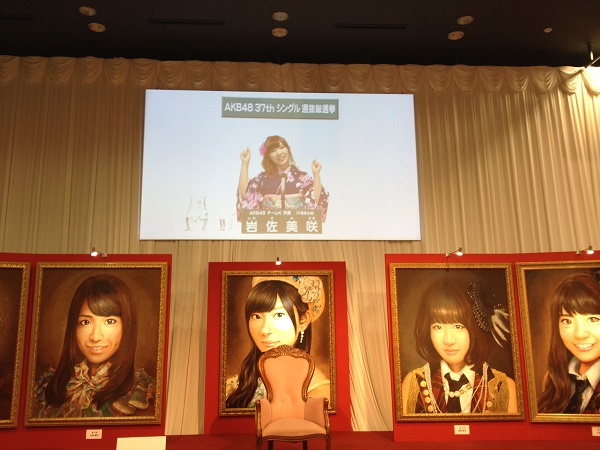 The other fun feature of the Museum was the chance that a few members might drop by while you were inside.  This year they tried a new tactic by posting who would be visiting in advance, although they did not advertise the time the girls would be appearing.  I was lucky enough to be in the venue for two such visits.  The first was Team A’s Iwata Karen.  The second was a visit by a few members of SNH48.  The girls would appear on stage, say a few words, sign the wall.  Not a big deal.  But it was fun nonetheless. 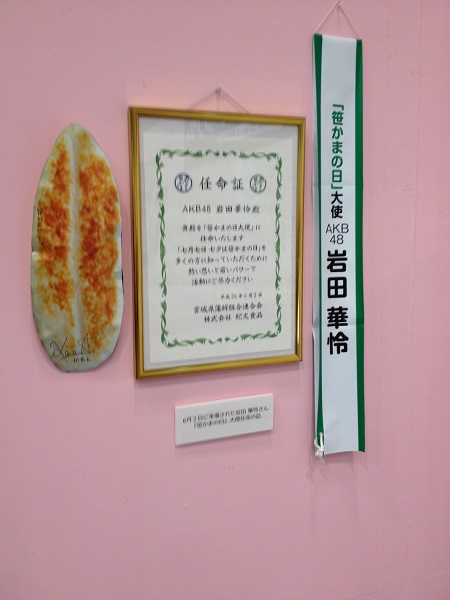 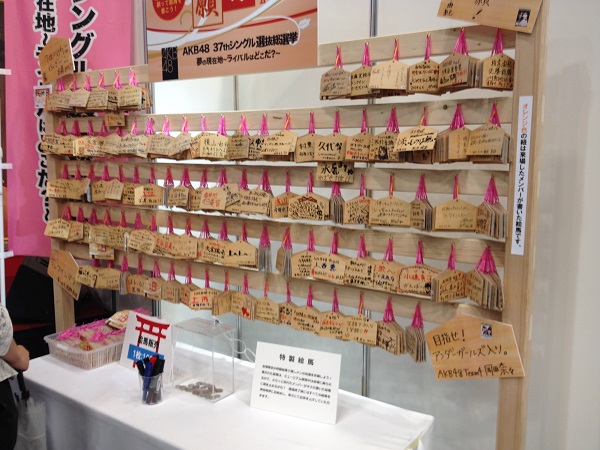 If I had to compare it to last year, I would say this year’s version of the museum was MUCH nicer.  There were more activities.  There were more costumes.  The displays seemed alot more professionally put together.  They had a live NicoNicoDouga stream.  Not to say I didn’t enjoy the museum last year.  But this year’s version to me took it to another level.  There was a lot more thought and preparation involved. 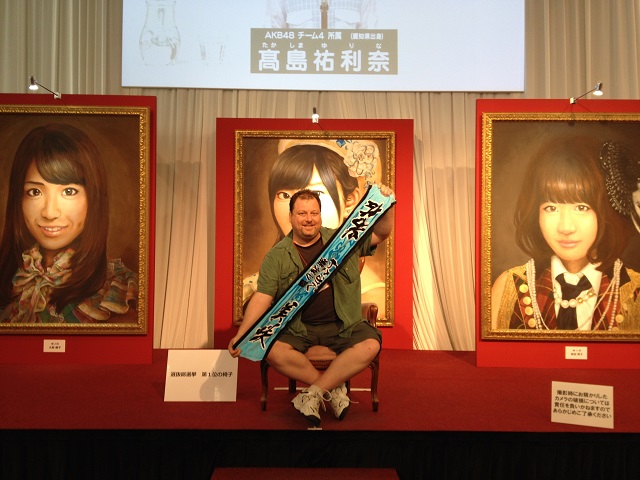 And of course I got to sit on the throne….Wasamin represent!