I had one more event to attend before I headed back to Osaka to finish up this trip.  To be honest, I kinda had my fill of Ajinomoto Stadium the previous day getting soaked in the rain.  At least for this show it would only be a few hours instead of the all-day extravaganza that is the Senbatsu Sousenkyo.  I also wasn’t worried about the weather since my seat was shielded from the elements.  When I woke up it wasn’t raining at all.  The forecast was for light scattered showers.  Quite the contrast from Saturday….It figured.

My friend and I headed out around mid-afternoon and found a street vendor nearby selling Kara-age and Chu-Hi.  We got our fill and a slight buzz before we headed into the stadium.  This time just a little bit before showtime… 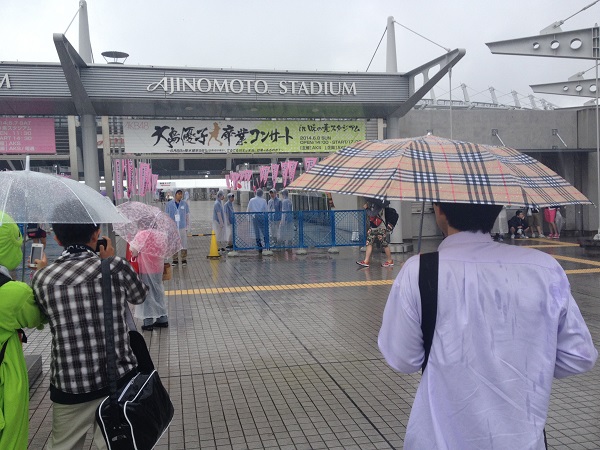 I was surprised how short and quick the line was on the opposite side of the stadium from where I entered on Saturday.  Plus, there more areas shielded from the weather.  Damn, had I known I probably wouldn’t have had nearly as miserable time the previous evening.  Oh well.  We headed to our seats and were given a small “graduation kit” from the Yuko supporters with a glowstick, and instructions how to use it.  The glowstick even had an inscription on it…with the original cancelled concert date.  That meant these had been lying around for a while.  But I had brought my green glowsticks, along with the green flags given to us at the gate I was ready to party! 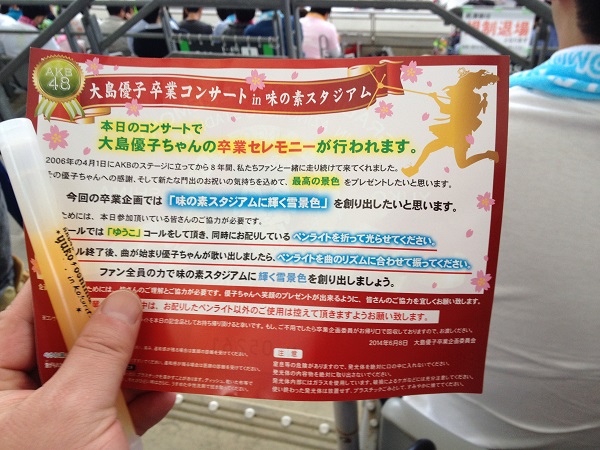 Our seats were exactly as expected.  Upper deck, around 7 rows from the rail around 2/3 of the way back.  No blind spots, but pretty far from the stage.  Binoculars would have definitely come in handy.  The good news was we were two rows from the aisle where the girls performed in the upper deck on Saturday.  So if they did that again we would have an awesome view for it.

Once the show began I was immediately reminded how much more I love AKB48 in smaller AND indoor venues.  There are so many issues when a group who’s motto is “Idols You Can Meet” performs in a stadium.  Most of the seats in the venue, including those on the field are much too far away to enjoy the show with the naked eye.  You are going to either need to use binoculars or resign yourself to watching the monitors.  That is unless they move the performance to a spot in the stadium closer to you.  The second issue is the sound.  There are echoes, delays.  The sound you are hearing doesn’t completely match up with what you are watching.

It also becomes glaringly obvious how much of the performance utilizes lip-synch.  Especially in the group songs.  Not necessarily during solos and duets.  There were also moments in the show where the singing was obviously live.  But when the girls are running all over the stadium mid-song, it doesn’t even look like they are even trying to mimic singing.  They are just running!  Not that any of this really ruins the experience.  It just emphasizes how much more special the theater shows and performances in places like Budokan or TDC Hall really are.  At least that is how I feel about it.

This particular show would be best remembered for it’s special and celebratory moments, beginning with Yuko’s opening performance of Nakinagara Hohoende with live piano accompaniment.  From how she was positioned on stage it looked as if she was wearing a HUGE flowing wedding dress, draping all the way from the top risers to the stage.

The next two segments after the opening MCs featured the AKB48 teams performing their B-sides from the Labrador Retriever single, as well as the sister groups’ performances.  Of all the B-sides my favorite by far is B Garden.  However the song loses a bit of it’s humor when watching from so far away.  It was also during this segment that Not Yet performed their debut single Shuumatsu Not Yet….in the middle of the arena.  In fact I would have been inches away had they done this performance formation on Saturday. I am sure they had something planned like that.  It must have been washed away by the rain.  Rats! 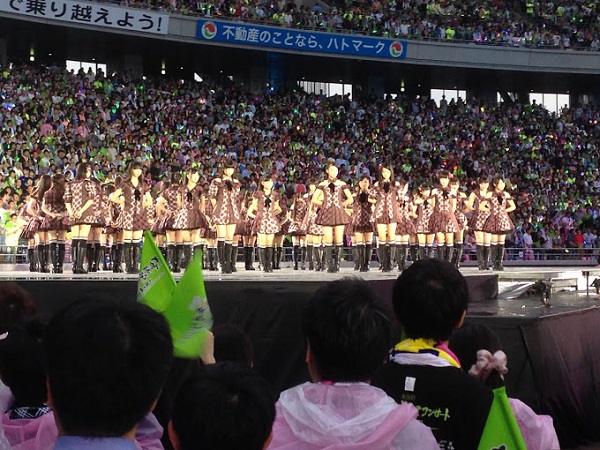 NMB48 performed their …I mean feature track from their upcoming album, Ibiza Girl.  It sounds fairly generic to me.  It’s too bad since I thought NMB had a great run of singles from Nagiichi to Kamonegix.  But their last two I haven’t liked nearly as much.  I still am looking forward to their album release as it sounds like it will come with some great DVD content!  All three sister groups finished their sets with fan favorites, NMB’s Nagiichi, HKT’s Melon Juice and SKE’s Oki Doki.  The set finished with the old concert favorite Hikoukigumo.  Dammit, I have so many flags at home specifically for use in that song!

Note to self:  Always bring a Hikoukigumo flag to any AKB48 event…just in case

It was around is time that Yuko and Kojiharu did an MC across the stadium.  The one where Yuko tried to goad Haruna into announcing her graduation, and Haruna’s trolling the audience with her responses.  To be honest I am all for the older members moving on and the younger girls taking over AKB.  But there was a bit of happiness to hear Kojiharu fight it and say “Hell no, I’m not going anywhere…yet!”

The next memorable moment for me was the performance of After Rain in the upper deck.  Four members came right by me, including Yuko, Yukirin and Matsui Rena.  To be honest I forget who the fourth person was but they were all close enough to High-Five.  In fact the girls did do that occasionally.  Unfortunately I wasn’t one of the lucky ones.  Seishun no Inazuma featured Yuko tap-dancing alongside her Ori-K partner Miyazawa Sae.  It was a nice touch, as was Yuko’s duet with Takamina on Kinjirareta Futari.

The rest of the main set was filled with Yuko-centric songs and a short cloudburst leading into the encore.  The rain didn’t last too long, maybe 2-3 songs.  The encore began with a VTR, and Yuko’s new graduation song.  Everyone lit their commemorative lightsticks.  But it was immediately apparent that they did not create nearly enough light for an impressive visual in the stadium.  So the fans quickly abandoned them for their green glowsticks, which created a much more powerful effect.

They saved most of the sentimental Team K songs for the very end, performing Sougen no Kiseki and Sasae with many of Yuko’s original teammates on stage.  Among them were some of the graduates, but not all.  Aside from Sayaka, Nontii and the remaining Team K members who haven’t graduated, I really couldn’t tell who was there.  But I was sure Meetan wasn’t there as she was scheduled to deliver her baby any minute!  The next moment, originally designed to be emotional, turned out to be extremely humorous.  The handshake line….

Yes, every member from every group queued up to say goodbye to Yuko.  The line stretched completely around the stadium.  But even that wasn’t enough room as girls continued to queue after the line started moving.  All the while the musical portion of Sasae played on a loop over and over.  Some of the girls did become tearful, but a cry-fest really isn’t Yuko’s style.  There were probably more humorous interactions than anything.  But what was really funny was the amount of time this was taking.  I wasn’t keeping track, but I am sure it took at least 30 minutes.  Eventually someone told the girls to hurry up, so by the time AKB got their turn (they were last) it turned into more of a high-touch.  Too bad.

The show ended with one last performance of Mae Shika Mukanee and Heavy Rotation, with Yuko floating above the stadium on a wire all the way to the top deck.  It was actually quite nerve-wracking to watch, especially in that weather.  She floated into a small structure above the crowd, and with an audible “door slam” she was gone… 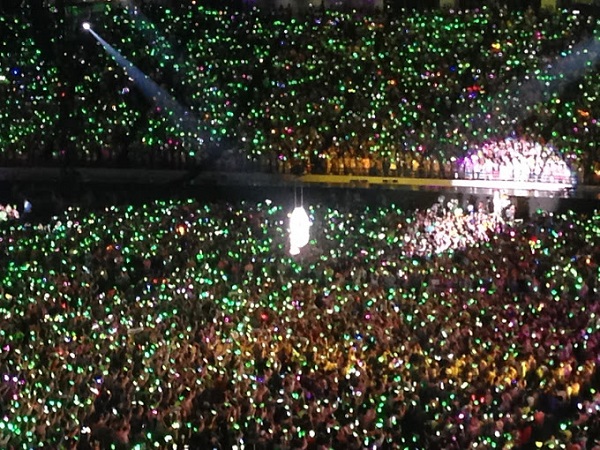 Their was a final performance of Labrador Retriever as fans were already filing out of the stadium.  You see the fans’ were in a hurry to conquer next challenge…getting to the train station, and on to a train back to Shinjuku.  My friend and I decided to hang back and go to the goods tables.  Luckily nothing was sold out so we pretty much got everything we wanted.  It was then that I felt completely foolish for arriving so early on Saturday.  Live and learn, I guess.

Yuko would finish her official AKB duties with one more theater performance.  I didn’t win for it, so I went back to Osaka to finish out my trip.  I decided to treat myself to some crab and a nice massage.  The following day I made a brief visit to South Korea before heading back to the states.  Picked up some authentic Korean Kimchee as well to enjoy when  got home. 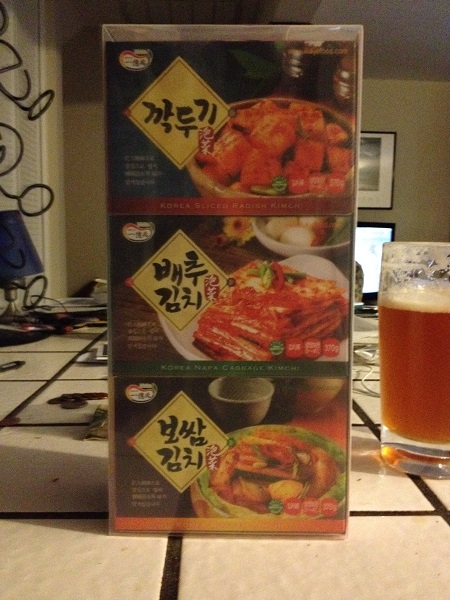 Overall it was a very nice trip.  Not the least bit disappointing.  Did disappointing things happen?  Sure, but not everything goes your way in life.  The disappointing events ultimately opened up new opportunities which I am so happy to have experienced.  I was mainly sad because I didn’t get a chance to connect with Wasamin.  But that was easily remedied.  I wrote her a nice long letter, telling her about my adventures and making sure she knew that I did come to Japan to support her, even if we couldn’t see one another.  After all, that is what having an Oshimen is really all about.  It isn’t about me.  It is about Wasamin.  It’s something I don’t think a lot of people in the Western fandom really understand.  What it really means to have an Oshimen. 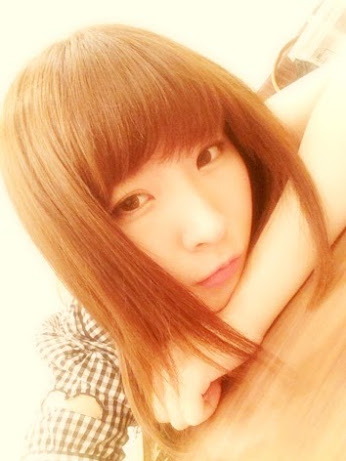 At any rate, Japan trip #14 is in the books.  I arrived safely at home, and am now scheming for my next trip over.  Whenever that will be.

P.S.  Occasionally I get asked personal questions on this blog.  I know there is no email link.  But you can find me on twitter or Ask.fm @Cristafari, and on Stage48 with the same handle, Cristafari