It wouldn’t be a Japan trip without enjoying some awesome cuisine.  The great thing about Japan is that terrific food doesn’t have to be expensive.  In so many cases the dining experience is a lot of fun.  And with the expansive rail systems all over the country I never have to worry about drinking and driving.

I always have a list of restaurants that I want to visit during my trip, and I made it to most of them.  I didn’t get a chance to hit IWA, the AKB-themed Yakiniku restaurant.  There were also a couple of Ramen places I failed to eat at.  One in particular, a restaurant that specializes is French Fry topped ramen, I merely forgot about.  But I did find a few new places to enjoy… 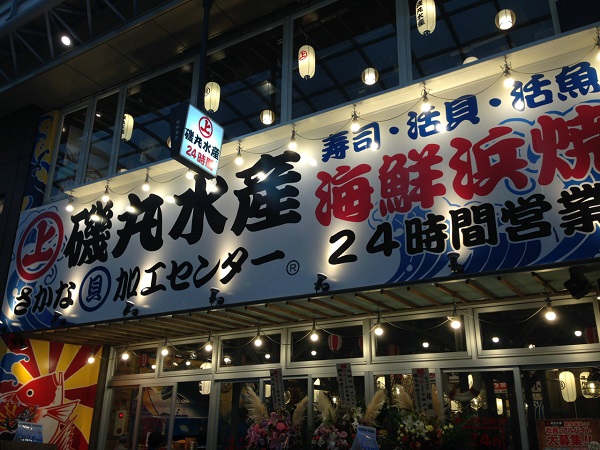 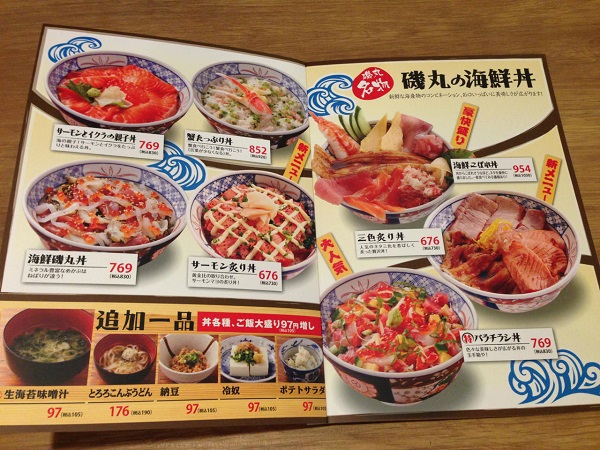 This is actually an izakaya chain, but I had never noticed it before.  I tried the one near my hotel in Asakusabashi, but I later found locations in a few other parts of town including Akihabara.  They specialize in Sashimi and Grilled Shellfish which you cook right at your table.  Plenty of small dishes and an extensive bar menu.  Plus they are open 24/7!  So a great place to kick back if you miss your train!  For both of my visits I had a Sashimi Rice Bowl.  It was kinda small.  But considering the price, it was pretty good.

I have talked about this restaurant before.  I decided to head back to Enoshima early in my trip before Golden Week started.  I figured the town would be a madhouse after that.  Plus, the weather was quite nice. 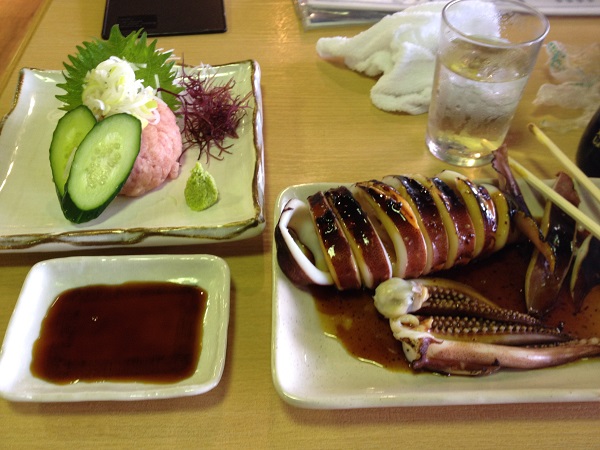 I decided against having the Turban Shell they are known for, instead opting for my favorite Grilled Squid and a side of Negitoro.  After lunch I ventured up the hill to pick up one of this giant Octopus crackers.  I had eaten the lobster version before, but this is their signature item.  The line was extremely long so I took one to go. 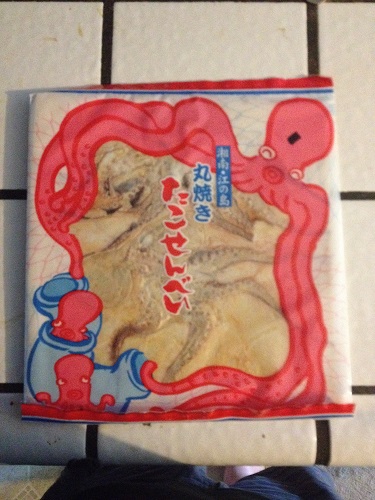 But it is always nice to visit Enoshima island.  Suck a beautiful place, and it is so much fun to ride the Enoshima Electric Railway! 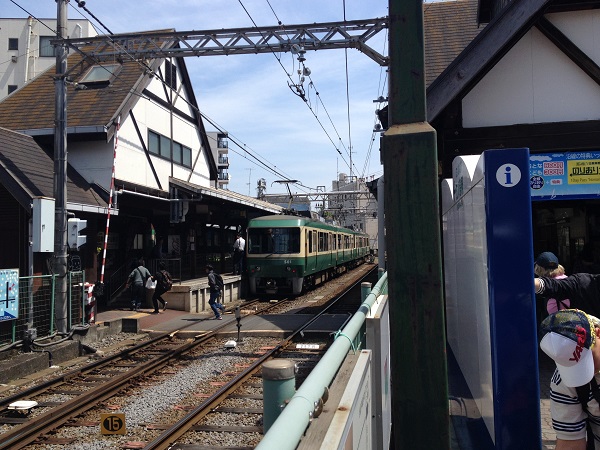 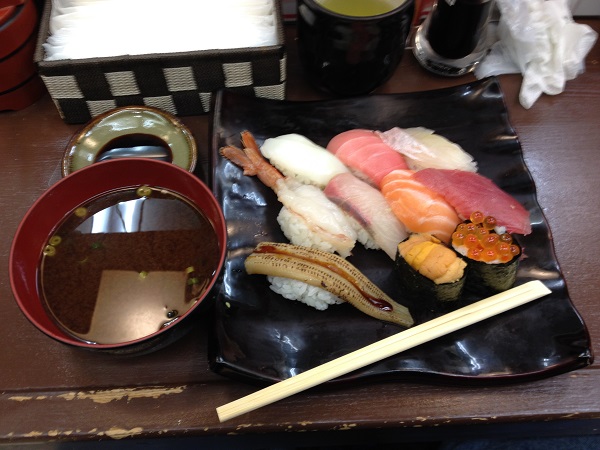 This was the little Sushi restaurant in the Aeon Mall portion of Kishiwada Talktown.  It is also where Wasamin had lunch that day.  So in a way we ate together (hehe).  By the way, the cost for that lunch was approximately $10usd.  Try to find sushi that good for that price in the West. 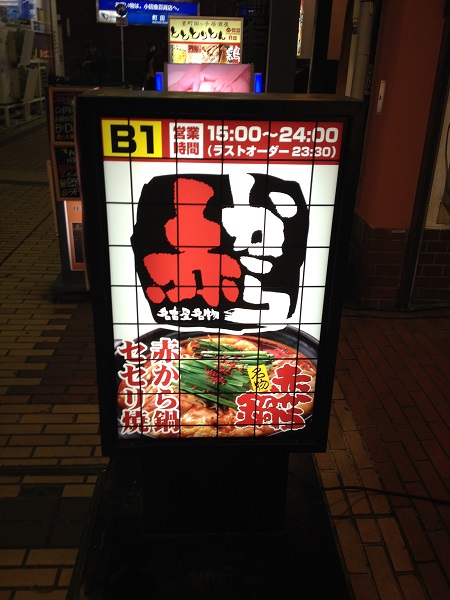 Geez, I never thought I would be eating Nabe again.  But it was my friend Kwan’s last night in Tokyo and this was what he wanted.  So how could I refuse?  This restaurant also came recommended by Wasamin.  So again, how could I refuse?  They serve much more than just motsunabe.  They are famous for their spicy dishes, including spicy Tebasaki.  I wasn’t in the mood to blow out my taste buds so early in the trip, so we opted for medium spicy. 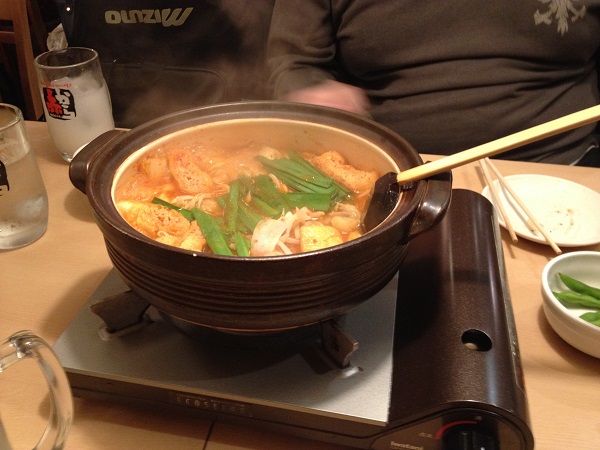 I have to admit that part of the reason I didn’t like motsunabe the first time probably had a lot to do with the fact that I was coming down with the flu at the time.  Experiencing it with a healthier body makes a big difference.  Not to mention I really like this restaurant’s style of making it spicy.  Quite frankly, part of my issue with the restaurant I ate at in Fukuoka was that it was too bland.  Anyway, I was sure to tell Wasamin that I ate Nabe again since she loves it so much!

Here I go again trying Takoyaki, one of the Japanese foods I can never get into.  The other I have trouble with is curry.  Although I think in both cases the first time I ate them in Japan the restaurants weren’t that good.  Anyway, the reason I chose to give it another try was the Negitaco with vinegar and daikon on the side.  It wasn’t covered in sauce or bonito flakes either.  Ultimately it wasn’t too bad.  Having toppings I really like certainly helps.  But I don’t think I will ever be a huge Takoyaki fan.

Another Izakaya restaurant with multiple locations in Tokyo.  They have great happy hour drink and food specials, and they specialize in Prime Rib!  Kind of an odd specialty for Tokyo.  I was well aware of this location since it is directly across from the AKB48 Cafe and Shop.  I first went there for happy hour and enjoyed an extremely large Kaku Highball for about 450 yen.  But the entire time I was there I could smell that Roast Beef cooking! 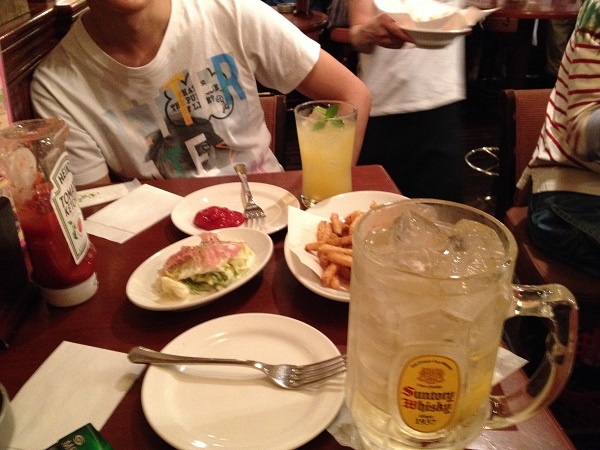 The next day, after having my original dinner plans broken and having some bad luck with restaurant queues, I decided to return here and try their Roast Beef dinner.  At first the bartender told me they were sold out of Prime Rib, which seemed odd since a) it was only 7:45pm and b) it is their signature dish!  Then he paused and told me they were sold out until 8pm.  And he said it like that was a long time.  I was drinking, so I didn’t care.

It did take a while to come out, over a half hour.  In fact I wondered if they ever put the order in.  And you know what, it was pretty good!  Not the best cut of Prime Rib I have ever eaten, but it was cooked well and the sauce was nice.  Oh, and I loved their crude little attempy at Yorkshire Pudding!  More like a Popover. 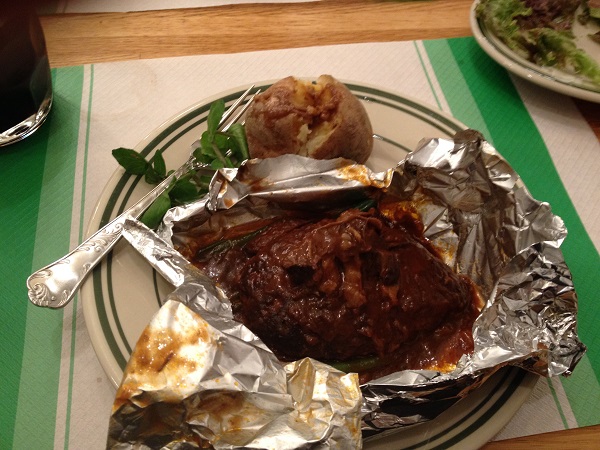 This was recommended by a friend.  Actually, he first wanted to eat at the Hard Rock Cafe, but I vetoed that idea.  This was his alternate choice, and it was quite a good one!  I had their signature item, the Tsubame Grill Hamburger Steak.  And that’s exactly what it tasted like, Steak!  The vegetables underneath were excellent, and the baked potato covered in Miso was surprisingly good.  Rumor has it their sausages are quite tasty as well.  I highly recommend this place.  It’s located in Atre, on the second floor inside Ueno Station.  Thay had quite a line too, but it moved quickly. 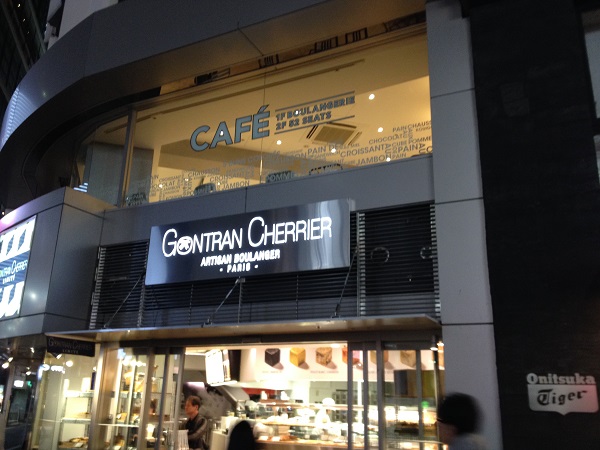 I stumbled upon this place in between Wasamin shows in Shibuya.  Right around the corner from Marui City.  I needed someplace quick, and with Shibuya being so crowded this place was one of the few that didn’t have much of a line.  It is a French boulangerie with multiple locations in Japan.  I eat at places in Japan like Andersen’s Bakery and Vie de France all the time.  But this place blows them away!  I had a sandwich, and a few of their smaller items, which all come in bite-size squares.  I’m sorry I didn;t get any photos of my lunch.  But trust me, it is a must-visit! 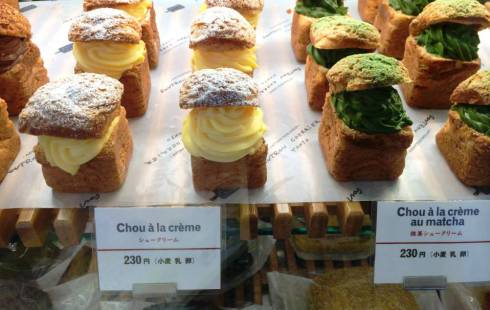 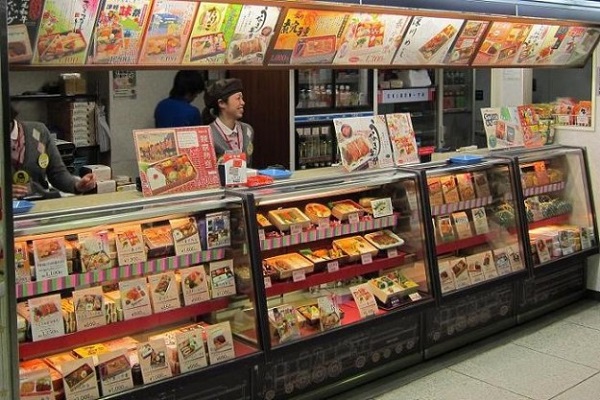 One of my favorite things to do in Japan is travel by Shinkansen.  And if I am traveling during the evening I love grabbing a dinner bento and a couple Suntory Highballs and enjoying the ride (if you know what I mean).  The toughest part is choosing just one as they all look so good!   After Wasamin’s performance in Osaka most of the Wasamin fans boarded trains back to Tokyo.  I boarded a different train for Nagoya, a much shorter ride.  But indeed long enough to enjoy a meal.  I was really in the mood for Unagi, but when I saw this bento I just had to try it!

It wasn’t Kobe beef, and it wasn’t nearly as rare as it looked on the box, but it was very tasty.  An of course like many bentos it was served over a large portion of rice.  I didn’t pair it with red wine, instead opting for some harder stuff.  But to me a Shikansen ride isn’t complete without a bento and some booze.

Anyhow, that was just some of the places I enjoyed during my trip.  Unfortunately I have never properly trained myself to photograph my food so many lunches and dinners go unphotographed.  Plus, I eat at a lot of Kaitenzushi.  So if you want see pics of a stack of empty plates…  That said, these were probably the most memorable.  And I am happy to say that I did not frequent McDonalds even once.  Although I did visit Burger King one night to try their Onion Teriyaki Whopper.  Not bad, but my stomach felt like it had an anvil in it for the rest of the evening.  You live, you learn.  And with that I say… 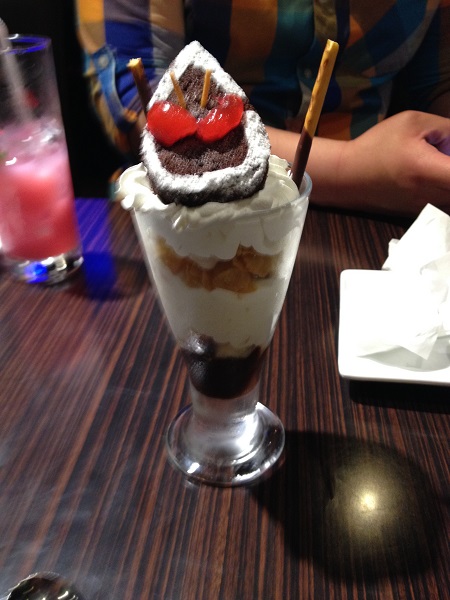