Backtracking to Saturday, SKE’s first event of the weekend was an individual handshake event also celebrating the release of the Love Crescendo Sub-Unit Single. I had a total of six tickets for four members. So I was somewhat less excited about this event. So many members I usually go for, like Mikitty and Ishida Anna weren’t there. Also, I applied late so I could not get tickets to members like Dasu, Shibata, or Churi. So for me it was going to be light handshake fare.

The doors opened at 10am, but the first handshake slot didn’t begin until 11am. One of the big features of the event was the special drawing they were having for anyone who bought copies of the CD at the venue. You could win all sorts of prizes, including additional handshake tickets, 2-shot chekis, autographed goods. At first I didn’t realize how big this part of the event would be. It turned out to be the focal point of the day. It also helped that the National Event was the next day, so fans were happy to purchase the CDs for the additional event tickets.

I arrived at Makuhari around 11:30. I would get my tickets stamped and get my one Slot 1 ticket done. Then I would see about this drawing thing. As I came around the corner I saw this huge queue across the bridge. Now I have been to plenty of SKE events before, none of which ever had a line like this over an hour after opening. As I got closer I could see that pretty much everyone on the bridge was female. At that point I knew this had nothing to do with SKE. I wondered what Boy Band was sharing Makuhari today? 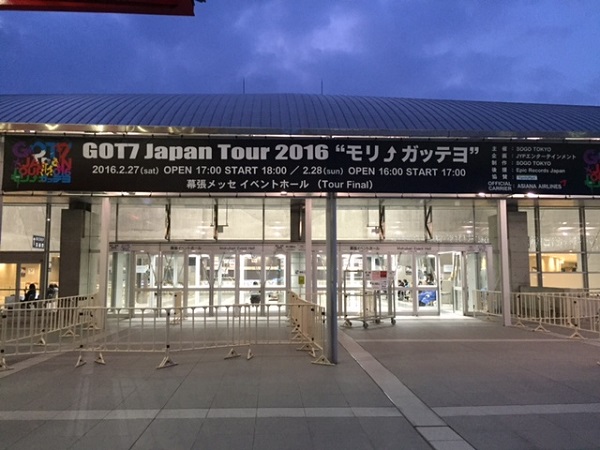 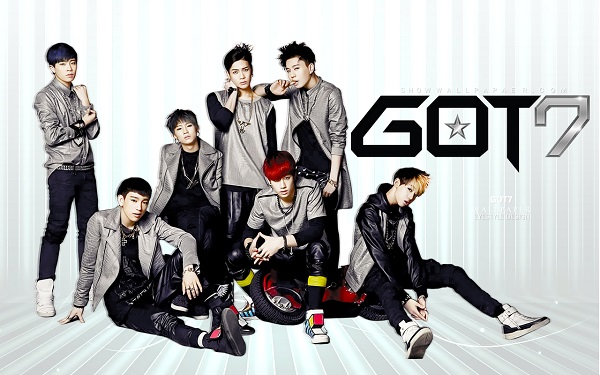 For those of you who don’t know (I had never heard of them) Got7 is a Multi-National K-Pop Band. I have seen them compared to One Direction. This was the last leg of their Japan Tour, and they would be performing on both Saturday AND Sunday in the building next door. However their goods booths were set up right in front of the entrance where SKE was holding their events. So the venue was filled with cute girls of all ages throughout the weekend. (Both inside the SKE event and outside the hall.

I made it through the eyecandy and got inside the hall. The CD sales for Slots 1-2 had already ended. The next sales period would’t begin until after Slot 2. There was already a sizeable queue for it too. No matter, time to visit a member I have never seen in person before…

Obata Yuna (Slot 1)
Here was another of the 7th Gen prospective members I rooted for during the auditions. In fact most of the 7th Gen prospects I really liked made it into the group. That doesn’t happen to me very often. Usually my selections and the groups’ selections are very different. In fact, Yuna was very high on my list. So I was excited to see what she would be like in person. Her queue wasn’t very long, so I jumped right in.

First impression, is this the same girl? I thought she looked different compared to all the photos I have seen of her. Of course management often does an amazing job of turning new members from “regular girls” into “idols” Once I came in and she smiled at me I knew. “Oh yeah, this is her.”

Me: Nice to meet you!
Yuna: Thank you.
Me: I really wanted to see you. I rooted for you during the audition.
Yuna: Really? Thank you!
Me: Good luck with Team KII.
Yuna: I will do my best!
Me: See you again!

She is a very cheerful girl, with a really bright smile. I do like her. Although it was quite telling that I had ample opportunity to see her on Sunday and didn’t take advantage. But I am happy I got the chance to meet her. Anyway, on to Slot 2…

I actually had the same two tickets for both Slots 2-3. Tani and Kaotan. There was also a lunch break in between these slots. This would be where I would queue up for the CDs and hopefully win a fabulous prize or two.

Tani Marika (Slots 2-3)
Both Marika and Kaori-chan were in the Chaos Stage a couple of days previously, so I would have plenty to talk about. Neither had a line, so I would get these tickets done quickly.

Me: Good morning Marika!
Tani: Good morning! Are you Genki today?
Me: Of course, I am seeing Marika-chan!
Tani: When you see me is it “Rabu Rabu”?
Me: Of course. I want to see you more on television too!
Tani: Thank you, see you again.
Me: Yes, I am coming back.

I loved her little quip about it being “Rabu Rabu” I thought it was cute the way she said it. Later on…

Tani: Ah, hello!
Me: I saw your performance on the Takamina Stage.
Tani: Oh really?
Me: Tani and Chori’s performance was great!
Tani: Thank you.
Me: I am a longtime fan of SDN48…

As I was being pushed out. Like Kaotan, Marika always follows me to the end of the booth and continues waving and talking to me as I am gathering my stuff. I think by now both of them really do know that I am a fan. I have seen them at a bunch of events, and I almost always have multiple tickets.

Matsumura Kaori (Slots 2-3)
Kaotan also had a very small queue. It’s funny, but it seems as if at least in Tokyo they get a much bigger turnout at the AKB single events. Perhaps it is because this single wasn’t a huge seller. I mean it is nice that I don’t have to wait very long, but I know most of the girls are happier when they have a nice turnout. Anyway, I had two tickets for Kaotan in consecutive slots…

Kaotan: Konnichiwa!
Me: Hello Kaotan! Did you have fun at the Takamina Stage?
Kaotan: Yes, did you see it?
Me: Yes, I thought it was great!
Kaotan: Really? You had a ticket?***
(Now I got confused, because she kept talking about Takamina and a ticket. I thought she was talking about Takamina’s grad concert in Yokohama. I was wondering why she was asking me that, but I answered affirmatively anyway)
Kaotan: Really, you had a ticket? Wow, congratualations!
Me: Thank you (As I am being pushed out)

Seconds later I realized what she was actually asking me. She was asking if I had won any of the Takamina Special Stages. Now it all made sense. Oh well, I would clear this up when I saw her next slot…

Me: I am sorry. I did not win any of Takamina’s Stages
Kaotan: I see, but you won a ticket for her concert?
Me: Yes, two of the concerts.
Kaotan: That’s great!
Me: I also won for Sae’s concert at Gaishi Hall, so I will see you there!
Kaotan: Yatta!

Okay, glad I cleared that up.

The CD/Drawing Queue
After Slot 2 I ran upstairs to grab some lunch and something to drink. In that short time the queue to buy CDs had ballooned significantly. I wasn’t too worried. Even if the line took over an hour I would still have ample time to use my Slot 3 tickets. I was more worried that they could run out of CDs. In fact when I finally made it to the front (in slightly less than an hour) they were all out of Types B and C. So my “Set of 3” consisted entirely of Type A. My friends were saying “That’s okay, since you are mainly getting them for the drawing and the National Handshake tickets”. However I actually had not purchased this single yet aside from the Theater Version. So I really did want B and C too. Luckily @Jeff86 had extra copies of B and C so he swapped with me. I used my handshake tickets first, then I queued up for the Slot 4 drawing…

As I walked out I saw that I had won a personally signed poster. And I recognized the Kanji of the member. It was Sae! Now I am not a fan of Sae at all, but I knew this was a good ticket to have. Especially since this was one her last events. Just as I hit the exit there were a bunch of fans trying to see what everyone won. Once one of them saw I won something for Sae I was converged upon by a bunch of people who wanted it. I’m like, sure I’ll trade it. What do you guys have? The first thing they offer me is a couple of National Handshake tickets. So I immediately had to pull the “I’m not stupid” card. I was willing to trade it for a member I liked. I told them I am a fan of Kaotan and Tani. If they found a prize involving one of them I would gladly trade it straight up. Apparently they couldn’t find any prizes for them. So now they were offering me money for it. I felt a bit uncomfortable about this because this is against the rules. But they were insistent. Finally they offered me 10000 yen. I probably could have held out for more, but the guy kept saying that Sae was his favorite member and he wanted the ticket so badly. I dunno, he could have been lying (In fact he probably was since he didn’t seem like the Sae fan type), but I didn’t want to be a dick, so I agreed. So at the end of the day I got all three CDs and three handshake tickets for nothing, plus an extra 5K yen in my pocket. Not bad. Hey, if it is this profitible maybe I will try again for Slot 5! But first, slot 4…

Oya Masana (Slot 4)
So after all of that silliness it was almost time for Slot 4. I figured I would queue up early for my one ticket and then get in line for the CDs again. As I was walking across the hall I noticed one of the members had their name crossed out for the rest of the afternoon. It was Masanya! She was my last ticket. During all of that CD queueing I failed to notice that she had left for the day. Now with Chara-ani when this happens you can exchange your ticket for an “open ticket” to another member. This was mumo.net though, and they do not do “open tickets” like AKB. I went over to the info desk to see what the policy was. I knew a refund was an option. But a) I do not have a Japanese bank account and b) I am not going through all of that stuff over ONE ticket. I asked if they had any other options. No, but then they started bringing over all sorts of other people. They kept asking if I was coming to the next event (I believe there was one more, but it is in Nagoya) I kept saying “It’s okay, not a big deal” But every time I would turn to leave they would say “No, wait here just a little longer” as more and more people discussed this “big” issue. Finally they let me go after like 10 minutes. Seriously, I didn’t want them to make any special accomodations for me. I was just asking about the policy.

After that I decided not to stick around for the last CD drawing. I actually had something I needed to handle back in Tokyo. So I maneuvered through the massive crowd of rabid Got7 fans trading pics and whatnot, and bailed back to Shinjuku. There would be more fun the next day anyway