Part 12 of my Catch-up Series…

I know a lot of people on Stage48 these days weren’t around when SDN48 existed, and even if you were most of you didn’t pay too much attention to them, which was too bad, since at the time they were my favorite thing about the 48-groups. And I just adored Chaki. I always said that if Meetan weren’t in the group Chaki would be my oshi member of SDN. I occasionally wrote her fan letters too, and she always thanked me at high touch or handshake events after she received them. So after SDN48 broke up I have kept up with her activities, and have occasionally gone to see her perform.

It has been almost 9 months since I have seen Chaki live. She is high on my priority list when it came to artists or idols I like to see. However, since I am living here in Tokyo now I had to rethink how I am going to participate when it comes to seeing idol events. I am no longer here on vacation, so quite often my responsibilities have priority over fun. Even with Wasamin, I don’t go to every event. Although she is the one that I will do my best to see as often as possible. As for the others, since I moved back in the Summer…

FESTIVE: Have seen three times, the last time was about a month ago
Tokyo CLEARS: Seen twice, last time was in early September
Hashimoto Kanna: Haven’t seen.
MWAM: Haven’t seen
PARMS: Haven’t gone, and Kamen Joshi is no longer a priority for me since Himeri left.
Chaki: Haven’t seen, until this event

Anyway, I checked Chaki’s schedule last month and decided I would make a point of seeing her in December since she had quite a few events scheduled. But she had slipped my mind until I saw her thanking people on twitter for coming to her show last week. I thought, “Oh shit I forgot about Chaki again!”

So Wednesday was my birthday, and I was on social media quite a bit responding to people sending me best wishes. I noticed Chaki talking about her show the next day. So I sent her a tweet telling her I was thinking of coming. A few moments later Chaki responded asking me to “Please come to the show

” So now it was set, and I couldn’t back out now since Chaki knew I was coming. (And yes, Chaki knows that is my twitter, she has mentioned it before when I have seen her that she sees my responses to her) 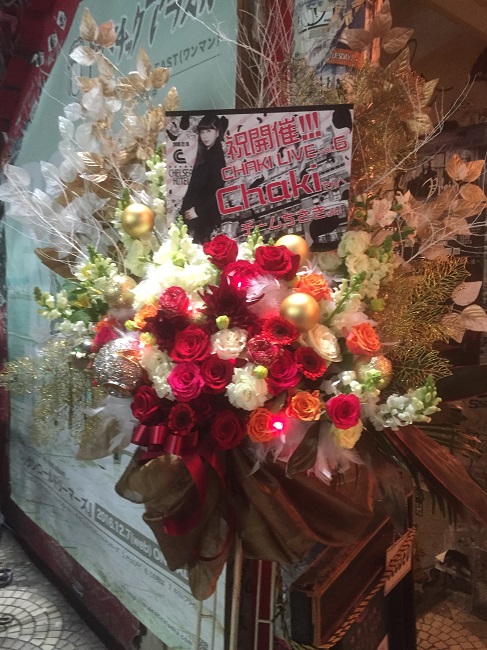 This was my first time at the Chelsea Hotel, although I had walked by it quite a few times when going to Tokyu Hands, so I knew where it was. Like so many of the clubs in Shimokitazawa where Chaki usually plays, it was a small, dingy little club in a basement underneath another club and a Kebab shop. Small stage, little bar. To be honest, the place smelled kinda like a men’s room. But whatever, I was one of the first people in, so I would have a good spot. I didn’t go to the front of the stage though, a stayed a few feet back toward the right. I did go over to the goods table since I wanted to a) pick up copies of Chaki’s new single, b) pick up some of her old indie singles that I don’t have, thankfully they had them in stock this time. (They didn’t at the last show I went to). I also knew that Chaki has a Ponta Card, which you can redeem to go to a Chaki drinking party! Awesome prize, eh? I also got a free Chaki poster for buying multiple copies of the new single. 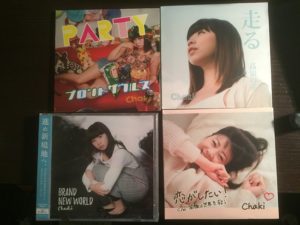 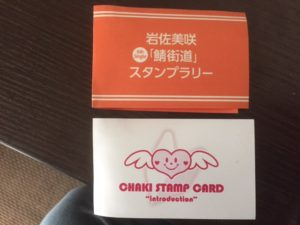 It got to be around 15 minutes before curtain and there still wer only like 25 people in the club, including Chaki’s mom. I was waiting to see if any of Chaki’s SDN48 friends would show up (at Chaki Live Vol. 3 Rachel, Akiko, Hiromin, and Megu were in the audience) Lo and behold, in walks Nachu. She quickly waved to us in the small crowd before jumping into the dressing room, where we all could immediately hear Chaki squealing! Nachu hung out at the back of the venue for most of the show… 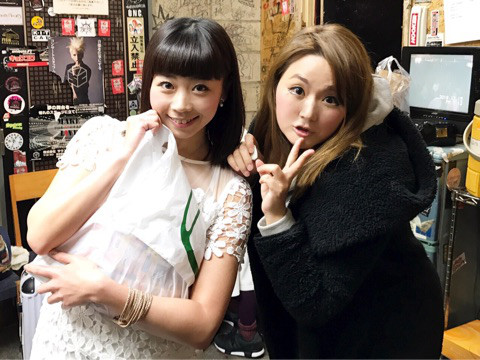 Finally the show started, 10-15 minutes late. Chaki came out in a pretty white dress, and to my surprise she had a new back up band. The all-female “ChakiPro Project”, who were also all dressed in white. The band was really good, especially the guitarist, Kei-chan. She had a real bluesy Santana-like sound, and did a couple of real impressive runs. The setlist for the most part was pretty much her album, “Chakiism”, which I bought back in March. I love the CD, and highly recommend it. 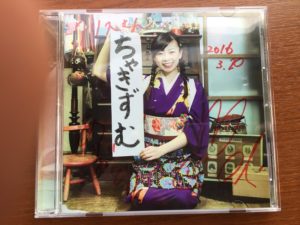 There is also a lot of audience participation during her performance. In fact, at one point her birthday committee pushed my up to the front of the stage, when Chaki saw this she leaned down next to me, shoved the microphone in my face, and we did a duet of the end of the chorus part of the song “Party”. So now I get to say I have sung with an idol! (Well, actually Wasamin and I sang together once, but that was during a handshake) After that I got a bunch of high-fives from people in the crowd. The show ended after about 90 minutes, and a quick one song encore. 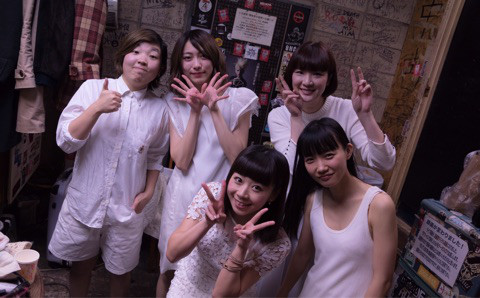 I was going to bail, but I knew that Chaki usually comes out and talks with the audience after the show, so I grabbed another drink and hung around. Eventually she came out, and started signing people’s CDs. While I was waiting in the queue I noticed that the occasional fan was talking a cheki photo with Chaki, so I took a closer look at the goods “menu” and saw that a Cheki was 1000 yen. Cool! So I got to the front, Chaki immediately thanked me for “helping” her with the song. I asked if I could get a “Chaki Cheki” too, and she said ofcourse. I mentioned it had been quite a while since she and I had taken a photo together. She was like “That’s true!” It was funny though, when she was signing my CD she got all embarassed that she had to ask my name. I don’t see her that often, so I don’t expect her to remember it. LOL. While she was signing the CD she mentioned our little twitter interaction the previous day. We took the picture, and I told her I would see her again soon. In fact her fans were asking me when I would be coming to see Chaki again. I told them later this month. She has a live in Ikebukuro on Friday, so I will definitely go to that. 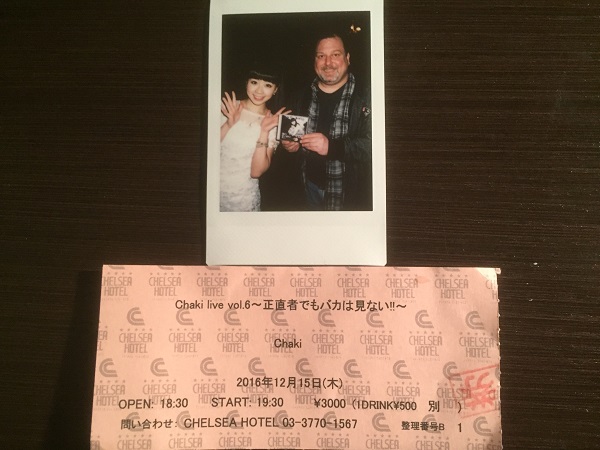 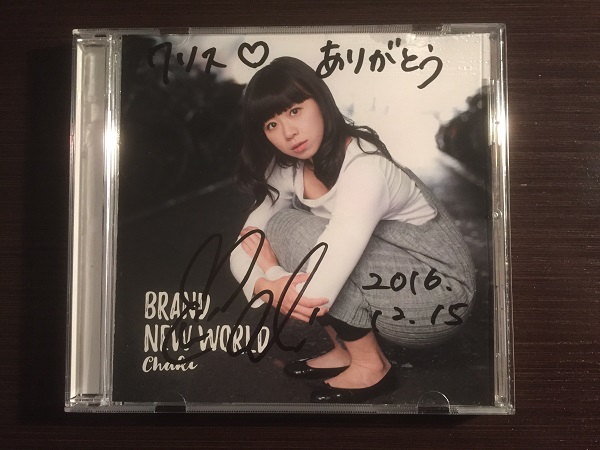 And with that I left….

So a funny thing happened the next day. I was writing a little blurb on Facebook thanking my friends for sending me birthday greetings, and I was talking about my birthday celebration was spent seeing Chaki, and how much I enjoyed the show. I then remembered that Chaki mentioned she had a Facebook page….

That’s odd, I don’t remember ever seeing Chaki entries on my Facebook timeline.

So I checked her page, and I had sent a friend request to her a long time ago and she never responded. So I re-sent it. Within minutes she accepted the request, then she started “liking” a bunch of random entries on my timeline, including some of the birthday wishes from my friends. She also “shared” my post where I talked about her, but she commented that she couldn’t read English, so she didn’t know what I was saying. So I responded telling her that it says the show was great and I had a lot of fun. A few minutes later she “liked” that post too.

All in all it was an awesome time, and I look forward to seeing her again next week.