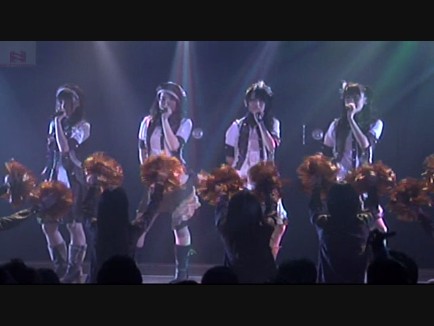 I was reading Cat’s Aitakatta! blog last week, and she brings up an interesting dilemma when one is an AKB48 fan from overseas planning to book a trip to Japan.  Most of the time there is no guarantee you will get to see the group in concert, unless they are playing a special event at a big arena where the tickets are sold in advance.  But if you want to see them at the theater, there is no guarantee they will be playing while you are there.  Sure, they are usually performing.  But case in point, the week prior to my October arrival there were no shows the entire week due to a big handshake promotion for Oogoe Diamond.

Second, you have to win tickets to the show via email lottery.  So again, no guarantees.  Although if you are emailing for tickets throughout the week, I am sure you will see multiple shows.  I emailed for six, and got into three.  And two of those were “cancel machi”!

I had one opportunity to pick one show I was guaranteed to see.  And even though Team K is my favorite of the three, I chose Team A because being a brand new stage I figured it would be the toughest to get.  And I was right, I never won a ticket to Team A other than that one.  So I made a wise decision.

After I saw all three Teams perform in person, I concluded that Team A’s stage was my least favorite.  With the exception of one or two songs, it just wasn’t memorable to me.  And K and B’s stages were so much more exciting!  They both left a much stronger first impression.  But now that I am home I have had the chance to watch NetCinema’s broadcast of the three current stages, and my opinion of all three have changed dramatically.  Some of the songs I liked at first I don’t care as much for now.  And some songs I didn’t care for then I now love!  Go figure.

But still at Stage48.net I read more and more people are dissatisfied with A5 right now.  And I feel badly because the more I watch it, the more I love it!  But it does have some handicaps…

Nagai Hikari ~ The opening song is one problem, in my opinion.  And it’s not that it isn’t a good song.  I really like it!  But you start the show with AKB48’s traditional Hip-Hop styled “Are You Ready” overture, and it trainwrecks right into a song that starts out as a ballad.  And it’s too bad because Amina’s solo at the beginning (I think that’s Amina) is stellar!  I just think this song would be a lot more effective somewhere else in the playlist 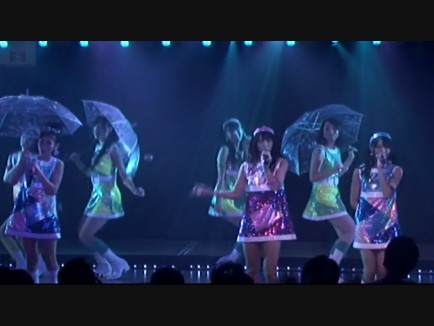 Squall no Naida ni ~ The funny thing is my first thought when I watched this song was that it’s bad luck to open an umbrella indoors.  Then again, Singin’ in the Rain has been done on stage indoors for decades without a hitch as far as i know.  This song is really cute, but it brings up another issue, and it’s not their fault either.  This is a brand new stage.  And I believe the NetCinema performance was one of, if not the first live performances of it.  So obviously the girls aren’t as comfortable with it as if they had been performing it for months.  At the end of the song the Kenkyuusei come out and dance.  It’s a cute albeit awkward moment.  But whoever the last girl was, she’s a really good dancer!

Now at this point I started to notice that I really didn’t recognize Team A at all.  Am I at the right theater?  I must be because I see Acchan.  But this is another reason why the show hasn’t gotten the best feedback so far.  I don’t think that the Ogie Pro girls (Haruna, Takamina and Miichan) have performed in it yet.  And when I was there Mai, Tomomi and Yukarin were missing too!  Double that with the recent graduation of five Team A members.  So the show was dominated by Kenkuusei and newbies.  I would be lying if I didn’t say it bothered me a little at the time.

JK Nemurihime and Kimi no Au Tabi Koi wo Suru, are mostly memorable for the wintery Seifuku they are wearing, very cute! 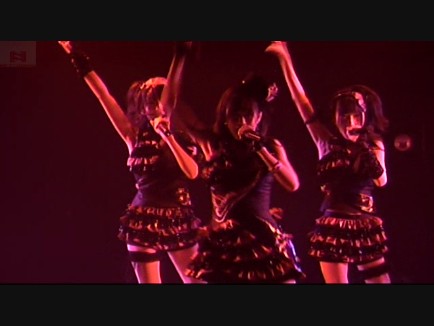 Kuroi Tenshi ~ Boy does Acchan look hot here!  I’m glad to see her getting in touch with her sexy side lately.  And just in time.  When does she turn 18?  I love the costumes here, and who is the Kenkyuusei that looks like Erepyon little sister.  She had my attention when I saw the show in person.  She is very energetic.  I was talking to someone after the show and I commented how impressive Maeda Atsuko is when you watch her up close like that.  And he agreed, saying that she wasn’t one of his favorites until he saw team A in person.

Renai Kinshi Jourei ~ To me, this is where the stage gets really good!  And yes I know I skipped Heart Gata Virus.  I have never given Amina Sato much thought, but this is the second time she has impressed me in this stage.  The newbie that impressed me the most when I was there was Kitahara Rie, but I kept thinking she was Miho!  Forgive me for being a relative AKB newbie.  But hey, I can name over 30 of the members by pic, I don’t think that’s too bad! 🙂 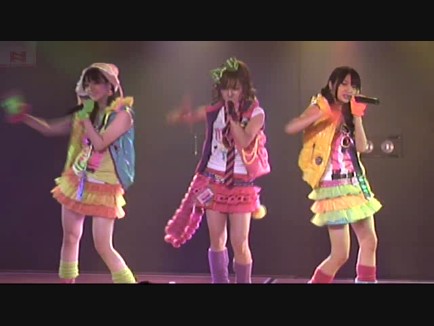 Tsundere! is far and away my favorite song of the stage, and those costumes are too funny! (see above)  This just rocks out!  The lyrics are great, and Tomomi has such great attitude up there (I forget who took her spot when I saw them)  They need a song like this for the beginning to frenzy up the crowd.  But obviously they save the smaller unit songs for the middle of the show.  This brings me to a little rant…

I hear a lot of dissing of AKB48 around the English speaking J-pop blogworld.  And to be honest, most of the complaints I hear are just dumb.  Hey, I’m not telling you to like AKB48.  But it seems to me that most of these opinions are based on seeing one or two PV’s.  I rarely hear anyone say they don’t like the songs.  I can respect that.  But until you have seen the stage performances, you know very little about AKB48…

“There are too many of them” – Last time I checked there are currently close to 40 members of H!P.  So what the hell are you talking about?

“They should do smaller unit songs” – They do…all the time.  Care to watch a stage performance?

“They are too dirty” – Oh please, would you stop basing your entire opinion on Seifuku ga Jama wo Suru?  AKB48 has close to 200 songs in their catalog!  And like H!P has never done a risque song, right?

Manatsu no Christmas Rose ~ AKB48 has done a few Christmas songs over the years, and this is probably my favorite!  It seems like the Research Students play a big part here, and I love the cheerleaders and the pom poms!  Which leads into an adorable MC segment.  Yukarin has written her script on her hand, and keeps forgetting what to say…so cute!!! 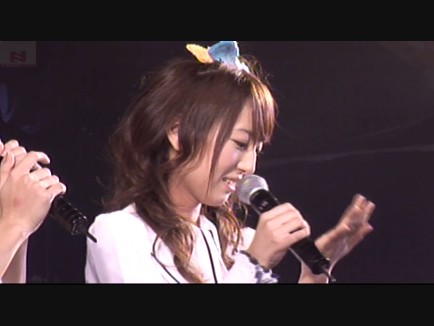 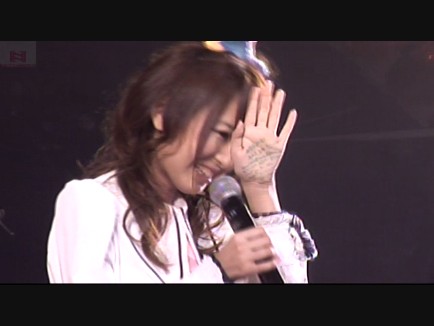 Switch ~  Very sexy, and I love the robotic dance at the beginning.  Nice euro-techno beat.  Now at this point in the show I understood why I paid 500 yen for the little red flag as they are all wearing them on their outfits.  But what am I supposed to do with it???  By the way, it’s time to point out another problem.  The camerawork here is horrendous.  I don’t think they had the camera on the lead singers once for the entire first verse.  Isn’t that supposed to be the focal point?  Again, the disadvantage of this being a brand new stage!  Although it sort of brings home the experience of being at the theater with those crazy pillars.  Unless you are front and center, sometimes you can’t see the main singer.  So you focus on the girls closest to you. 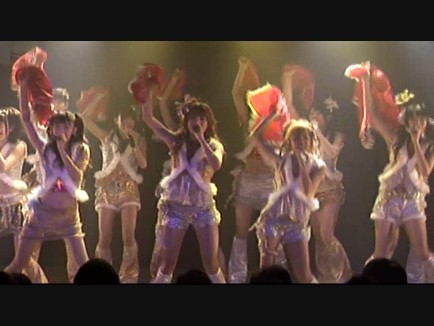 After Marukyuu which is just okay, we get my other favorite song of the night, which is Hikoukigumo.  I picked it as my fave that night, and it holds up to repeated viewing and listening.  So that’s what we’re supposed to do with the flags!  I’ll bet this song gets a few votes for Shibuya-AX 2009.  The audience participation factor is a lot of fun, as is the song!  I didn’t care much for the last song of the set, Ano Koro no Sneaker.  But that’s me, I am always tough on ballads.

Another thing I learned is there is an actual person assigned to start the encore at each show.  It’s another priviledge you can win!

AKB Sanjou! ~ Aahhh, I have found it!!!  This is the song that they should open the show with.  It is full of energy and attitude.  And I believe it will be even more powerful once Team A is back at full strength!

After Namida no Shinkokyuu, it is the final MC segment.  If I can make one complaint about their MC’s, many of them seem to go on forever!  But maybe that’s not a completely fair statement because I am struggling to comprehend the conversation most of the time.  But this was very sweet as it was the surprise announcement of Chisato Nakata’s promotion to Team A.  Aww, she cried really hard.  But then got to lead off Oogoe Diamond.  By the way, every Team did that song when I saw them.  It is Team A’s song, but having all of the Teams do new single is a common practice. 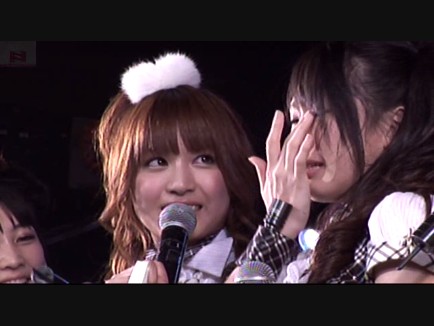 So what is wrong with A5?  I say NOTHING is wrong with it!  It’s not a perfect stage.  I still say it’s a little slow going.  But overall it is filled with fun and pretty songs.  And I’m sure with practice and a complete Team A performing it the show will get better and better as time goes on.