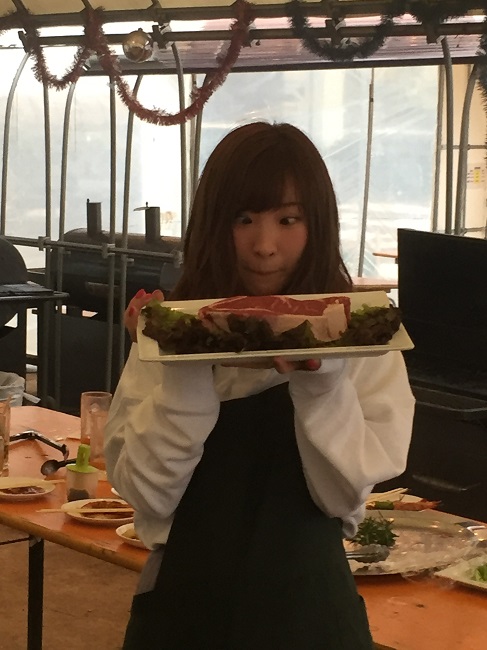 So after Wasamin had a one month break from hanging out with her fans, things got back into full swing this past week. She led off with an appearance at NagaraPro Enka Matsuri on the 4th. Once I had figured out that I could actually see this show, they announced it was sold out. So I pretty much gave up on seeing it. However, the night before the show they announced that there would be tickets available at the box office on the day of the show. The problem was that I as really busy this week, plus I have been suffering from a respiratory infection of some sort. Ultimately I decided to skip the show. I needed rest, and there were two more Wasamin events this week that I didn’t want to miss. So apologies since this is in reverse chronological order, but I wanted to lead off with the best stuff… 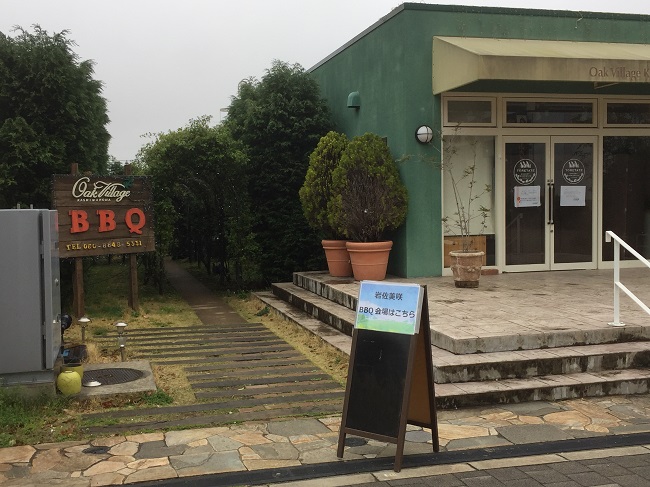 The BBQ party was part of Wasamin’s second album promotion. For those of you who purchased “Misaki Meguri ~dai 1 sho~”, you may have noticed the card included offering 4 different prizes. One of those was the BBQ party, which was limited to 26 people. Of the four prizes, this was the one I put most of my applications in for, and I won. I had no idea what a Wasamin BBQ party would be like, but I was sure of this…

And boy were my instincts good on this one. There were two seatings, 13 fans each, and I was part of seating #2, which was in the mid-afternoon. The event was taking place at Oak Village, which is a restaurant, event hall, BBQ picnic spot, and vegetable garden, all rolled into one. In fact, all of the vegetables we ate were grown on the premises. 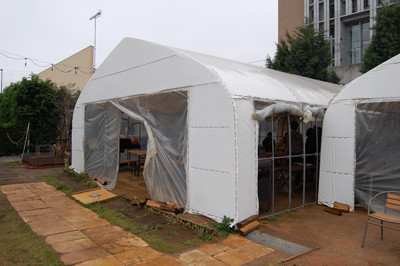 We were greeted by two of Wasamin’s usual assistants, Yamaue-san and Saso-san, who escorted us to our tent. Yes, it ended up taking place in a tent because it was cold and rainy all day. But no matter, there was a smorgasbord of food, and three grills fired up. Plus, we were serenaded by Wasamin’s second album, and new single. Saso-san let us know that we had unlimited non-alcoholic beverages at the bar, we were also restricted from taking pictures since they were actually filming the event, although there would be times when photos were okay. But then he let us know the best news of all…

Our head chef would be Wasamin!

Actually, this isn’t really a fan club event (although pretty much all of the winners were fan club members) In fact, Wasamin wasn’t lying when she said after her graduation that her fans would be getting even better experiences. I mean jeez, she’s cooking us lunch. And she worked her butt off too. She was going from table to table. “Who wants beef?” “Who wants shrimp?” I mean it’s incredible. She has developed such a close and intimate relationship with her fan club. It is like we are all family.

This was just the first round, plenty more food came out as the day progressed 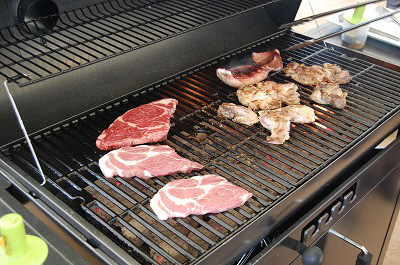 But they did not skimp at all. It was two straight hours of non-stop steak, pork, shrimp, chicken, sausage, squid, hotate, endless yasai, and a round of grilled onigiri. Every time we thought the lunch was over, they brought out more trays. So much food, and needless to say I didn’t eat dinner last night. And Wasamin never broke, she was on that grill pretty much the entire time. 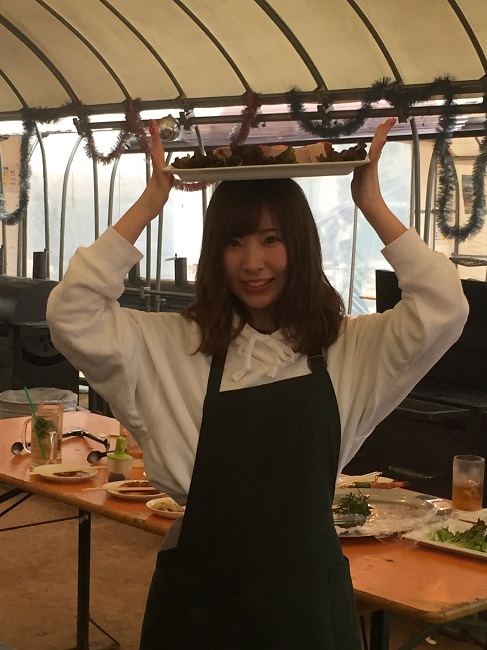 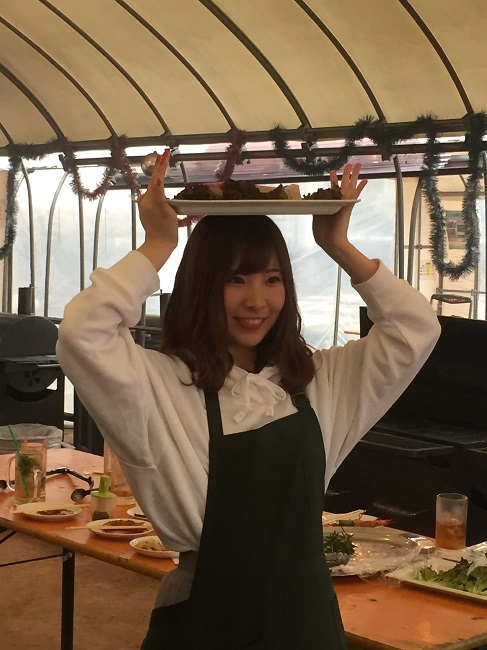 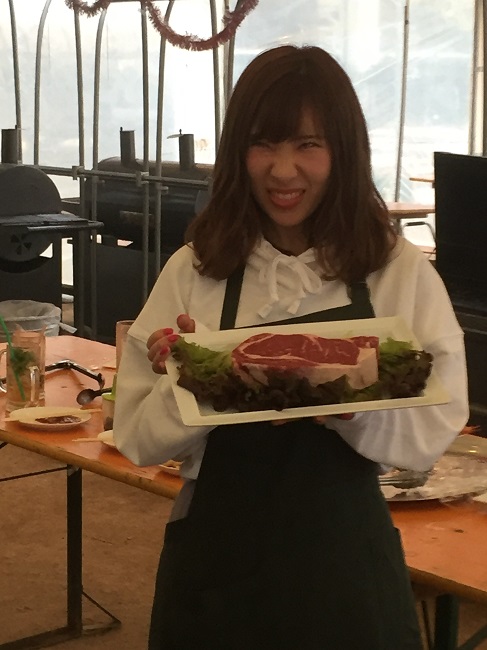 At the end of the event, we all got to take a cheki with Wasamin (and her evil tongs), plus we took a group photo at the end. Wasamin commented that she thought this was one of the best events they have done, and she wants to do another BBQ event this Summer. I must agree, and I hope I can win the next one too if she does it. Although, I think part of what made this one so special was that there weren’t too many fans. 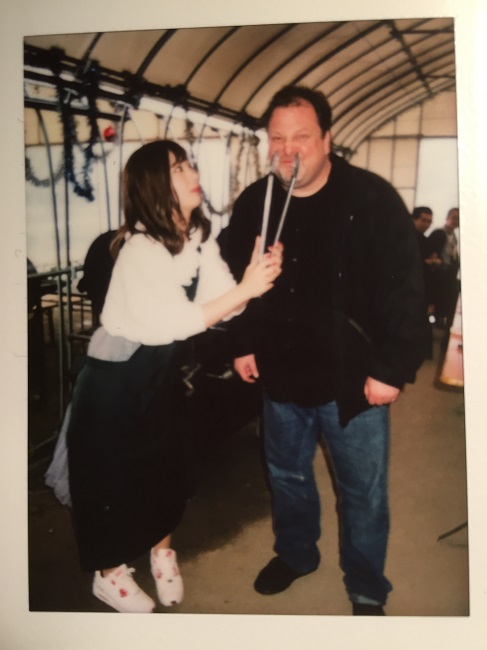 Anyway, with that event, all of the fan prizes for her album have been distributed. Those who didn’t win the BBQ, or the backstage experience at her 2nd concert got signed chekis and posters. However, now we are all waiting for the results of her 6th single prizes, which include a Karaoke Party and a “Saba Party” (None of us know what a Saba Party is going to look like, we’ll see) In the meantime….

Unfortunately I rarely have the opportunity to see Wasamin’s monthly challenge campaign, since it is during the week and during the day. However, I do have time to see the April and May shows. So I excitedly made my way out to Chiba for the performance. The setlist…

One of the special features of this monthly event is that Wasamin sings a “new” song every time. This month was the Peggy Hayama song, which was quite intense. It showed another facet of Wasamin’s performing talent. It drew quite a large crowd too. The audience was overflowing into the street alongside the stage. After the performance, fans could get a handshake for buying Saba Kaido, or a Shamekai (and bromide photo) for reserving her 2nd concert DVD. I opted for one of each…

Wasamin remarked that it had been too long since we had talked. I told her that I had missed her, but I now felt better since we were seeing each other again. I also talked to her about her new anime character, whose name rhymes with mine. I asked her if this means we are married? She and her manager, Ichikawa-san, both remarked that they really are similar. 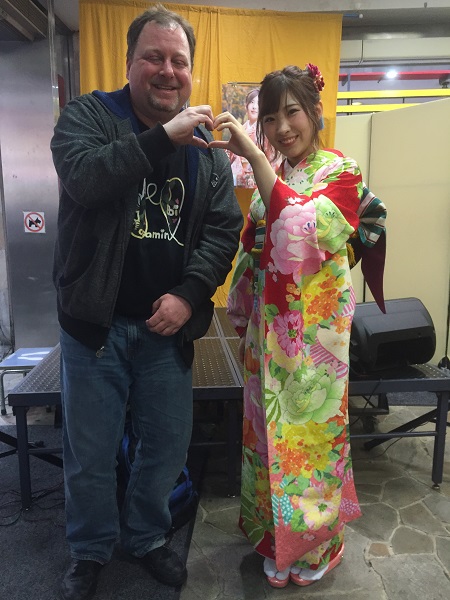 Anyhow, Wasamin is off to Okinawa for a while. I would have loved to have gone, but it wasn’t cheap, and I do have things to do in Tokyo. But no worries, she has announced a bunch of promotional events for her upcoming DVD release. And according to her manager, we should be getting a fan club newsletter in the mail soon with so cool stuff.