This past Sunday was like a “perfect storm” of events around Tokyo. AKB was holding a National event at Makuhari, while at the same time SKE was doing their own National event at Saitama. NGT, was in Toyosu, and HKT had their handshake event going on in Nagoya. (I’m not sure what NMB might have been doing) Anyway, I had tickets for both AKB and SKE. Which would I do, or would I manage to attend both? But first…

I didn’t have tickets for the 48-group Shamekai event on Saturday. However, I did manage to get a hold of two CD Signing tickets. A couple of members I like were doing their signings in Slot one, so I decided to head over early and and meet them. The problem was, there were three girls in the morning that I wanted to see, but I only had two tickets… 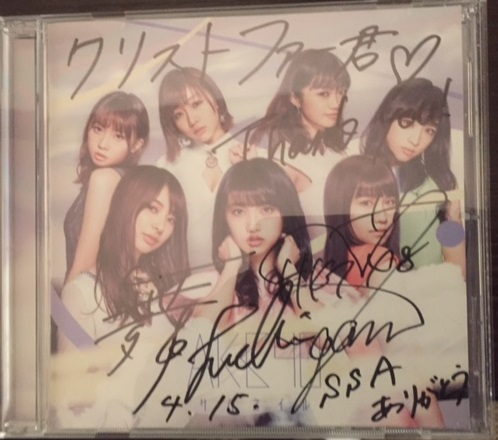 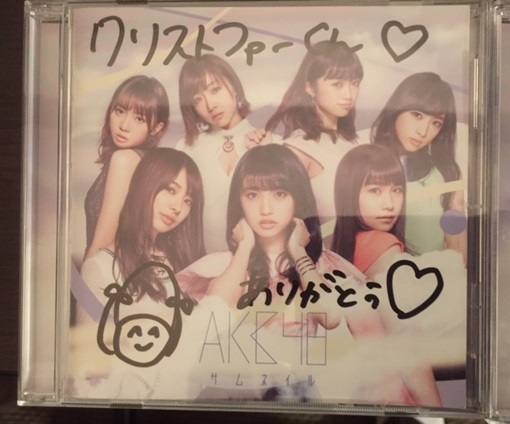 With both of them we pretty much talked about the SSA concert. And as you can see, Maichan even made reference to it on her autograph. The third member I considered getting a signed CD from was Tanamin. But since she is slot 2, I decided to forego seeing her for now. There might be another chance for me to get a CD signed from her in the future. I do have more CD signing tickets for next week, but i have already decided who I am going to use those on. Anyway, back to the national event…

I pretty much let my friend, who had never been to any 48-group handshake event before, decide where we would go. And although his oshi is in SKE, he opted for the AKB event. We got to Makuhari, and queued up for the mini-live. Ultimately we ended up toward the front of the Center-B-section.

I guess you really can’t call it a ‘mini-live’ anymore, since they do a full concert. Between MCs, and the many songs, the live went for over 2 hours. However, much of that had to do with the 16th gen Nemousu challenge at the end. the 16th gen girls all got 30 seconds appeal time, then they were informed of their 18-nin Beginner dance challenge. BTW, I didn’t stick around for the end of the event, but from what I hear they failed miserably. In any case, I was done with the live, and was ready for the hs event. These were the lanes we had to choose from…

I knew I wanted to visit Lane 1, and I was eyeing Lanes 2, 6 and 7 with my remaining tickets. By the time my friend finished buying goods, half the lanes were completely open, while some were still only taking show tickets. My friend wanted to tandem, so we decided to go to Lane 6 before it opened up. As you know, this is a National handshake, so you usually don’t get more than a second or two per member. “Usually”, being the key word here. I ran into issues a few times with members that I didn’t know what to say anything to.

Also, I quickly realized that I don’t really ever visit AKB members anymore, as there were only two members all day that knew me at all (Yuihan and Tanamin) I met quite a few members for the first time, and a few others that I haven’t seen for a long time. Anyway, here were my quick impressions…

Lane 6: Shimada Haruka, Takeuchi Miu, Yokoyama Yui: Let me start by saying that Shimada looks totally sexy with blonde hair, and I managed to tell her that, so I got a great reaction. Miyu gave me the “wow, a foreigner reaction, and Yuihan gave me a quick “oshashiburi” Anyhow, Shimada wins for a) looking hawt, and b) reacting positively to my compliment

Lane 1: Nakata Chisato, Tanabe Miku, Miyazaki Miho, Suzuki Mariya, Oya Shizuka, Ma Chia-Ling: First of all, I looped this line twice. And aside from Tanamin, I have really only met Myao before, and that was quite a long time ago. Also, Ma seemed sorta out of place among all these old-time members. Also, the OJS were really moving us slowly, so a few times I was stuck in front of members with nothing to say. Anyway, Tanamin knew me, so I basically congratulated her on graduating. Myao was silent with me the first time, but the second time I reminded her we met in New York. She was like “Really???” Chiichan reacted nicely when I told her I enjoyed her ‘Temodemo’, and Yannu pretty much stood there like a stone both times. Shiichan gave me the best reaction, first introducing me to Ma Chia-Ling, then later when she asked who my Oshimen was.

You see, being a Wasafan gives you street cred. Anyway, that was the lane I wanted to go to the most. But it ended up not being my favorite lane of the day. That goes to the lane I visited next…

Lane 7: Kizaki Yuriya, Nakanishi Chiyori, Nozawa Rena: I have met Yuria a couple times before, and she is always very genki with me. But Chori was awesome. When I told her I loved her MC segment (she did a comedy segment in the mini-live) She pumped her fist and gave me a really enthusiastic “Thank you!” Rena just asked me where I was from. Chori really gave me kami-treatment, so I applied for her handshake ticket for the next single when I got home.

Lane 9: Omori Miyu, Sasaki Yukari, Takahashi Juri, Muto Tomu: This wasn’t a lane I was planning on visiting, but I was trying to use up my tickets, and another friend of mine wanted to visit this lane, so I just went with him. Probably not the best idea, as this ended up being my most awkward lane. But that is partially my fault, as I really didn’t are about meeting any of these girls, despite the fact that I have met Juri and Yukarun before, and they were both nice the first time. Ironically, it was Miyupon and Tomu who gave me the better reactions. In fact, Miyupon really gave me an excited kami greeting as I entered the booth. Tomu thanked me when I said I was rooting for Orin to do well in the ‘Beginner Challenge’. I have always considered Tomu as one of my least favorite members, so I was happy that she gave me a nice greeting. I won’t really think of her that way anymore. But Miyupon wins for the kami-reaction.

Lane 2: Okada Nana, Minegishi Minami, Kojima Mako: Three girls who I have only ever met before in High Touch. All three pretty much tried to fish me with an English “I Love You”. Unlike Lane 1, the guards pushed us through very fast since this was the third-most popular lane, and had a really long line. So no ‘winner’ in this lane, we’ll call it a three-way tie.

I was done, and my friend was waiting to use his last ticket on Lane 4. However, Lanes 4 and 5 never opened for regular tickets before the break, so he decided instead to use it on Lane 1.

I asked my friend if we should make the trek to Saitama for SKE, we had 10 tickets, and would have time for the last slot and matome-dashi if we left right then, but ultimately he decided against it. At the end of the day, 20 seconds of facetime with a member probably wasn’t worth at 90+ minute, 950 yen train ride. And he is going to meet his oshi next week anyway. So we called it a day