Finally I had won a show after a 3+ year drought. I was beginning to believe my account was on a “no win” list since it had been so long. However, friends assured me that I couldn’t be blacklisted since I had won concerts in early 2016. But even that dried up, I hadn’t won a concert in almost a year.

Actually, this was not my first sign that things would be better. I actually got Cancel Machi for a 16th Gen show in Akihabara earlier this month. However, I did not make it into the show (I was about 10 away when they cut it off) Less, than three weeks later, I finally got the elusive winning email. I was so excited, even if this meant I would have to spring for the expensive round-trip Shinkansen ride to Nagoya. Team KII was perfect since it has three of my four favorite SKE members in it. Unfortunately, Yumana wasn’t performing, another KII girl that I like.

So, after being stuck on “31” for the longest time, I can finally say that I won my 32nd theater show. And this was my first SKE win since I saw Kuumin’s 17th birthday show in 2011, before they remodeled the theater. I grabbed a late afternoon Shinkansen out of Tokyo, which would get me to Nagoya in plenty of time. During the ride, I tweeted that I was going to see the show, and I was excited to see Kaotan perform. And whaddya know, Kaotan ‘liked” the tweet! Good, she knows I am coming. 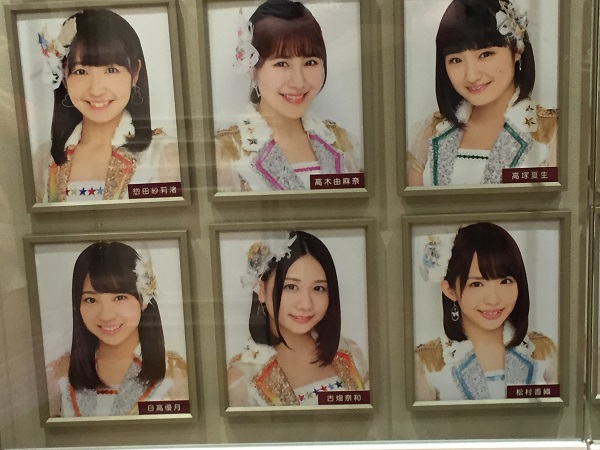 When I got to Sunshine Sakae, there was a short queue waiting for the theater to open. I instead decided to go to Tully’s and grab a cup of coffee. After taking a walk around the neighborhood, I noticed the line had gotten a bit bigger, so I decided to queue up. The box office was opening soon anyway. Eventually I got my ticket, #31. Good, that meant when my group was drawn I would be first in. I went downstairs to the station and put my bag in a locker, not that the theater doesn’t have lockers, but it is a bit quicker after the show if you don’t have to deal with that small locker area. Once the lottery started, people began saying little prayers to their oshi members on the wall. I was standing just opposite Kaotan’s photo, so I gave her a wink. After girls, family, and enpou groups went in, the lottery began…

I entered the theater, and wow. It is so much bigger than before when they were performing in what used to be a converted bar. The entire center section was taken up by the girls, families, and enpou, and the first rows were pretty much filled up. But the second rows were only partially filled. I got a seat on the left side of the second row, four seats away from the part of the stage that comes out into the audience. This would be a great spot!

Eventually the show started with the “Zenza Girls” performance. I was so excited since I think this was my first time seeing Kaotan perform Matsumurabu live. As for RESET, I have seen this stage a couple of times before, and I know a lot people (including me) were getting bored with it. However, it had been so long since I had seen a stage that I was happy to see anything. Not to mention, I like RESET, especially the songs after the units. Jigsaw Puzzle 48 is one of my favorite AKBallads, and White Day ni wa is a nice song too. But since most of you know the songs pretty well, I will stick to my experience of the members. Remember, I’m an obvious foreigner, close to the stage (actually there were two of us there, both in the second row) so I would probably get some great reactions.

The Three Girls I am Buddies With: Kaotan, Yuzuki, and Anna
Unfortunately, both Kaotan and Yuzuki spent most of the show on the opposite side of the stage, so I wasn’t getting too much face time with them at all. However, they both eventually made it over to my side of the stage. I caught Kaotan glancing at me from time to time, Yuzuki gave me a cute little wave. Anna never really looked at me though, LOL.

Fished the Hell Out of Me: Souda, Aoki, Ego
Especially Souda, who seemed to be right in front of me for most of the show. Constantly smiling at me, winking at me, waving at me, reacting if I reacted to her. She was doing her best to make an impression on me. The same goes for Aoki Shiori, although that didn’t start until the last part of the show. However, once she zeroed in on me she wouldn’t let up, even throwing the streamer directly at me, and then beckoning me to grab on to it. I must admit, I have a little crush on her after watching this show too. Infectious smile. Egochan got in front of me during one song and just kept pointing straight at me. I also had a little interaction with Obamina at one point too.

Totally into their performance: Churi, Nao, Obata
It is so much fun to watch Churi’s trademark emoting and facial expressions, and Nao just oozes sexuality with her dancing. She also reminds me of former actress Shimizu Fumika (Mare, Hentai Kamen, Kamen Rider Fourze) Obata is cute, and constantly bouncing around with her beaming smile. I was warned that she would steal my heart at the theater. However, a couple of members (mentioned above) had other ideas. I should also note Souda for her endless enthusiasm and energy, as well as Mikottii’s constant humor were always fun to watch. Heck, they all had great energy.

Eventually the main show ended, and it was time for the encore. BTW, it is cute how the KII fans start the encore with a play on Anna’s catchphrase, the “ii desu ka? ii desu ii desu ii desu yo!” part. In fact, since it was “Premium Friday” we actually got a Double Encore”. There were a couple of songs included that they don’t usually sing. One was Dada Machine Gun, I forget what the other one was.

Anyway, the show finally ended, it was time for “High Wave”, which ironically is what SKE used to do back in the old days, before they switched to High Touch. BTW, the fact that they do High Wave instead of High Touch doesn’t bother me at all. We still get a second of face-time with all of the members. The fact that we aren’t touching hands isn’t a big deal. It isn’t like handshake events don’t exist, right? Anyway, as I was going through I got the expected reactions from Yuzuki and Kaotan. And finally Anna noticed me and gave me a huge reaction and “Sashiburi!” From there I went out the door, out the theater, into the station (getting my bag out of the locker) and back into the subway in less than five minutes. I eventually got home just before midnight, and before going to sleep I filled out the questionnaire sent to me from the Ticket Center asking me to review the show.

So happy to see a theater show again. It is still the amazing experience that it has always been, and it helped rekindle my enthusiasm for the 48 Groups…At least for SKE and Team KII it did.