Yes, it is time for Wasamin’s monthly challenge campaign. This is the event she has been doing for like a year now, and this doubled as a Pre-order event for her upcoming concert DVD, which is releasing in two weeks. 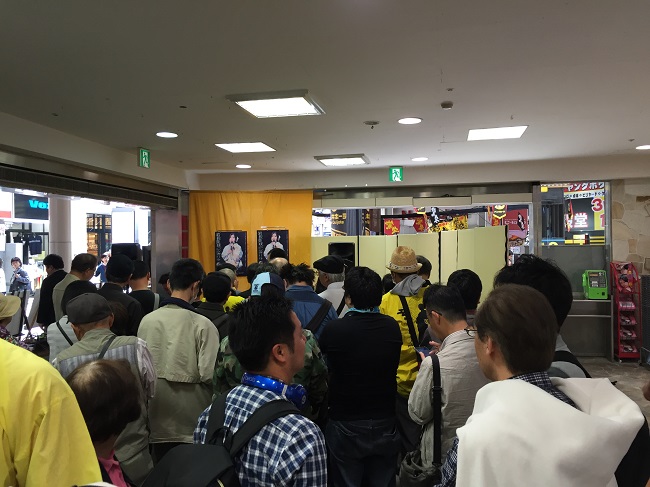 I got to the venue around 40 minutes before the event started, and was immediately greeted by another Kaigai fan. He is from France, and has been a Wasafan for around five years. But I don’t remember his name.

Anyway, I decided that since I had brought along my Wasamin Happi-coat, I would spring for a Blu-Ray preorder, which included a Shamekai and bromide. Here is the setlist…

Per usual, it was a pretty big crowd at the venue, which is actually held in plain site of a popular shopping street near Kashiwa Station, so it gets a lot of passers-by. A few fans commented that Wasamin’s challenge selection of Yume Shibai was only the second time she had chosen a song that was originally recorded by a male performer. However, it has been previously covered by Naoko Ken and Misora Hibari. Wasamin did her general promotion during the MC’s, including her TV Shows, Upcoming Summer Concert, and her play in Osaka (which I still haven’t purchased a ticket for) However, she again lamented that hardly anyone wears their Happi-coat to events. She counted seven total in the audience, including me. However one person was actually wearing a yellow Watarirouka Hashiritai Happi

After the performance it was time for the meet and greet. DVD/Blu-Ray got you a Shamekai, Saba Kaido single purchase got a handshake. When it was my turn, she immediately acknowledged that I w wearing my Wasa-Happi. “Happi, Happi, I’m Happy!” 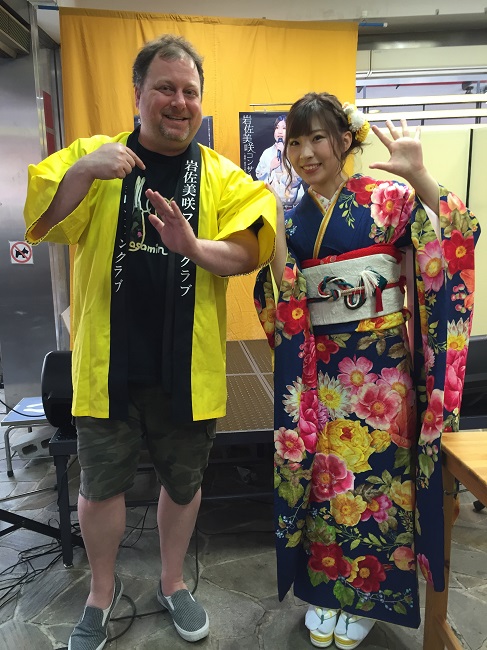 After the photo I told her that I finally won a show after such a long time. She was like “Wow, I didn’t know it had been so long since you won! Did you see Mariyanu’s graduation?” I told her no, but that I did see Mariyannu the week before. That was my one ticket, I hung around until the lane ran out, which was like 45 minutes later. Fans kept asking me if I was going to the Wasamin events in Obama this week. However, I am going to skip it. In the meantime, one of the Wasamin “heavy hitters” had a bunch of extra prizes from the Saba Kaido promotion. Last night he sent me a PM asking me which of the prizes I got. I told him I had two pens, plus the tote bag, but I didn’t get the Tumbler. So today he brought me this! 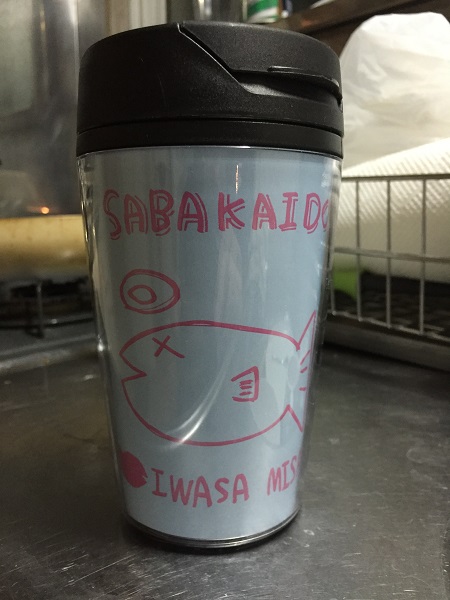 And finally one more announcement. Wasamin’s FOURTH CONCERT has been decided. It will be held September 23rd at Inzai Bunka Hall in Chiba Prefecture. Right now pre-order has started for the fan club. I don’t know when regular sales will start. However, Regular Sales for her 3rd concert series in July begin next week. So for people who are coming to Japan in July, here is the chance to see a great show.

Next up for me this weekend.  HKT48 Handshake event at Makuhari Messe on Saturday, followed by a Nagara Pro Concert doubleheader on Sunday in Shinjuku.  First up, Minyo Girls for the matinee, followed by Wasamin’s ‘Love Live’ acoustic concert.