I had never considered going to a Tomochin release event before. I actually do enjoy some of her solo work, but I don’t consider myself a big fan. When I heard the preview of her 9th single, I really liked it. It is somewhat of a departure from the style that she is most known for, and the hook is really catchy. So I decided that I would definitely pick up a copy when it came out. And if I had an opportunity, I would pick it up at one of her release events, which I know she has done in the past.

I checked her website, and it only listed a preorder event which occurred a week earlier. However, when I checked again last week it listed three events over this weekend, the first of which taking place in Tokyo on Friday night (Osaka on Saturday, Nagoya on Sunday) Unfortunately, Wasamin also had a concert DVD release event on Friday night. What would I do? Would I skip my oshimen’s release event? I mean she does them all the time. Then I noticed that they were 90 minutes apart. Perhaps I could make both events, despite that fact that they were in completely different areas of Tokyo. I remained undecided about whether or not to go. However, when I was in Shibuya on Wednesday to see Wasamin I kept seeing the truck with Tomochin promoting Kireimo with the weird theme song. It was haunting me, beckoning me to go see Tomochin. Heck, I had never been to a Tomochin event in Japan before, so I decided to give it a shot.

I arrived at Sunshine City a little more than an hour before the event. They had been selling the CD and giving out priority seating tickets since the morning, so I doubted that I would get a good spot. I purchased one copy of Type-A (with the DVD) and was given an entry ticket. It was #46. That’s a pretty good number! I have been to Wasamin events here before, and numbers that low are usually long gone by the late afternoon. Being 46th in the priority area would give me a closeup view.

A half hour before the event we went to lineup, and were eventually led back over to the fountain stage. It was standing room only, and I positioned myself behind two smaller fans who were against the rail, on the left side. A 100-second preview was playing on the giant screen, over and over and over again. Ultimately I watched that preview over 30 times while waiting for this event to begin. I figured I could watch this event for 30-45 minutes, and still make to the Wasamin event. But right before the event started I noticed my MAJOR tactical error. I had positioned myself so well to watch the event, I had made it almost impossible to leave early through the jam packed crowd that stood between me and the exit. I would be stuck here until the show ended. I also noticed another Wasamin fan in the audience. However, talking to him later he told me he wasn’t even going to try to see Wasamin that night. Anyway, the show eventually started with two comedians (I’m not sure I have ever seen them before) introducing her. I’m not sure what the first song was, but I believe it might have been… 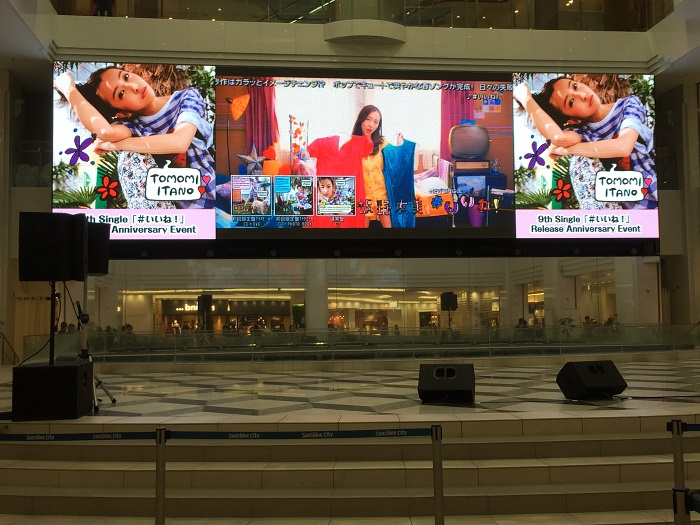 Like I said, I am pretty sure it was HIDE AND SEEK, but I could be wrong. But after that came the longest MC ever. Including a third comedian who came out. I think his name was either Iwasa-san (LOL) or Yuuwasa, something like that. Just another one of these slapsticky comedians with a “Moe Howard-style” haircut. Actually, a lot of the MC had to do with the promotion they are doing involving the Fan-PV they are making for this single. If you aren’t aware, you can send them a 5-second video of you giving something a “thumbs-up” (ii, ne!) and it might be selected for the music video. In fact, I saw one international submission (from a girl in Germany. Anyone here?) and another from Sato Sumire! However, the longer this MC went I knew the worse my chances were of seeing Wasamin.

Eventually she sang the single B-side, which is a slow tempo song. It was followed by a short MC where Tomochin taught us the call/response, and hand gestures for the new single, and finally the song performance. Also, people in the audience were sharing their own personal “ii, ne” experiences (my b/f asked me to get married, etc.) and getting autographed stickers. Finally the show ended, and I could have left right there. But I figured I was late for Wasamin already, might as well stay for the High Touch. I was able to get relatively close to the front of the queue, probably within the first 30-40 people. It was a High Touch, not a handshake, so I figured it would go quickly. And boy was I right.

People were coming out of the booth as quickly as they were going in. It was literally a non-stop pass-by and high-five. I did manage to get out a thumbs-up “ii, ne!” as her eyes widened with that “ooh, a foreigner” look when I stepped in. Afterwards I grabbed my bag and headed back to the train station and to Kinshicho. BTW, this was the third time I have met Tomochin, end every time it has been like this. Barely enough time to say hello. Not that I have very much to say to her. But now it was time to see if I could catch Wasamin.

Unfortunately when I got to Kinshicho I went out the wrong exit, and had to backtrack under the station, so I probably lost at least 5 minutes with that blunder. I eventually found the Tower Records and headed upstairs through the mall, just in time to hear in the distance the last few notes of Saba Kaido and the applause. Shit, I had even brought my Wasamin Happi-coat.

I was still able to make it to the handshake/2-shot portion of the appearance, where I apologized to Wasamin for being late. She said she was happy that I was there, so we discussed her DVD, which I watched the previous day. But perhaps she would have been slightly less happy if she knew the reason why I was late. Hopefully she didn’t read my twitter that evening.