I’m still not used to this, since it had been so long.  But there it was, in my inbox.  “Congratulations, you have been elected!”  The even stranger thing was that it was a win via my Twin Pillars fan club membership, which I had NEVER won a theater show with ever before, and I have had a fan club membership for pretty much as long as they have existed.  But it was set.  No cancel machi this time, and no traveling to Nagoya.  I was seeing a show in Akihabara, and it was a 16th gen Kenkyuusei show, which was perfect since my current favorite AKB48 member is 16th Gen KKS Yamane Suzuha.  This would be my chance to see her performing up close, and perhaps find a few more promising newbies. 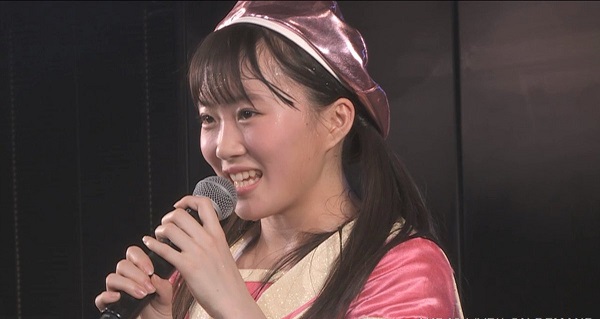 By the way, this would be my 33rd theater win, counting all theater shows from all groups.  It would also be my fourth Kenkyuusei show win.  In fact the last show I won at the Donki was a Kenkyuusei show, featuring the 14th and 15th gen.  The last few times at the theaters I have had pretty good luck drawing good seats.  I hoped my good fortune would continue. 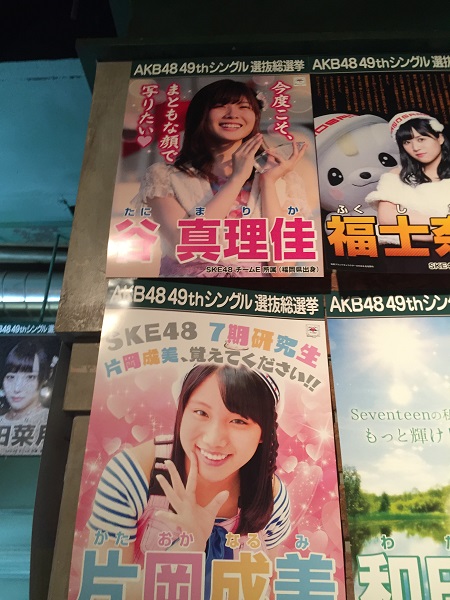 I arrived at the theater around 20 minutes before the check-in deadline, after having a few cocktails at The Hub.  I wanted a higher entry number, since historically I have arrived early and gotten low numbers at the theater.  It wasn’t very crowded, and there wasn’t even a guard at the bottom of the escalators.  Once I got upstairs i noticed that the SKE Sousenkyo posters were all around the lobby, so I snapped a couple of quick photos of Tani, Mizuki, and Kaotan’s.  I paid for my ticket, and drew #96.  After I walked through the hall I noticed a bunch of Wasamin fans hanging out  They all seemed to be surprised that I won the show.  They were like “You like 16th Gen?  Who is your 16th gen oshi???”  When I told them Zunchan they pretty much unanimously said “Zunchan? Kawaii!!”  Yes, I know.  Anyway, I grabbed a plastic bag to place my stuff into for the metal detector, and waited for the lottery draw. 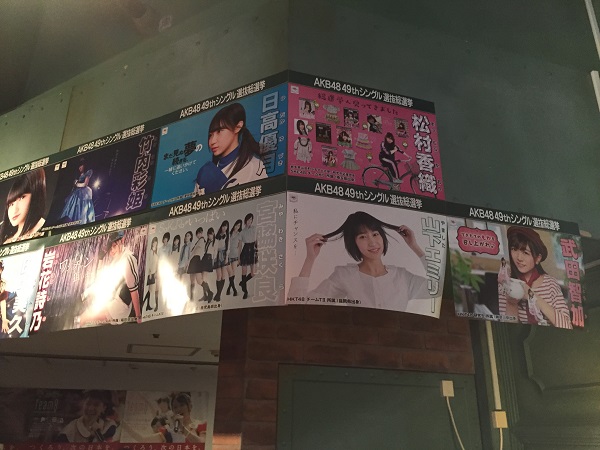 After the VIP, Enpou and Girls went in, it was time for the entrance lottery.  However, it seemed that the cancel machi people were the lucky ones on this night, and all the really high numbers were drawing in first.  So I wouldn’t be in the first couple of rows.  Oh well, I still felt good about my chances.  As more groups were drawing in, I began wondering how far in the back I would be, until finally “91-100” got called in.  We were 9th. (out of 24)  Okay, I probably still have a chance of finding a seat!

After going through the metal detector without incident, I quickly scanned the room to see what my prospects were.  I had three choices.  I could take a seat in the last couple of rows and see most of the stage, I could stand in the back and see most of the stage, but that would be far back, or I could grab a third row seat on the side, with a partially obstructed view due to the pillar.  I chose the 3rd row seat, despite the pillar, which blocked the entire left side of the stage.  On the other hand, I would be up close and personal with any girl on the right side of the stage, not to mention that stage wing that the girls occasionally dance on to.  I was almost next to it.  It was finally time for the show to start.

The 16th gen KKS stage is pretty much a Team A “Greatest Hits” stage, with various songs from all of the Team A stages.  But that didn’t really matter to me too much.  I really wanted to watch these girls perform.  Who would try to fish me?  Who would impress me?  Would Zunchan be as awesome as I thought she was the first time I saw her?  I will spare you the details of the main show, and stick mainly with my impressions of some of the members.

The member I was there to see…

Yamane Suzuha: She pretty much exceeded all of my expectations, and then some.  Although I was slightly disappointed that she didn’t spend as much time on the right side of the stage as I remembered. (Which BTW is why I chose to sit over there)  However, she is one of the better members when it comes to MCs.  She also did a flawless job singing the lead on “Koike” and doing the spoken parts.  She expressed herself very well.  My biggest surprise is when they did the mid-show costume change, and they came out in tartan skirts, with an untucked dress shirt and loose necktie.  Damn, Zunchan is not a skinny girl by any means.  Don’t get me wrong, I think she looked great.  But she does not have that traditional idol “skinny as a rail” look.  I was in awe of her hips and her waist. 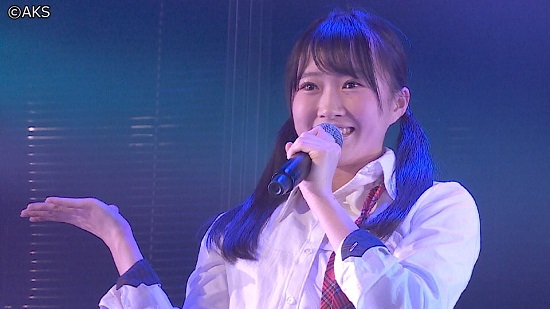 I actually spent the entire show trying to get her attention whenever I had the chance.  And I finally got a sort of acknowledgement during the second half, where I seemed to catch her eye and she looked right at me for at least the next 5-10 seconds.  But the best was at the end, during “high wave”.  Zunchan was at the very end, and of all the members she gave me the biggest “kami-reaction” when she thanked me (in English) and I made a heart symbol for her.

Sato Minami: This “super-loli” is one that from the start of 16th gen I thought would be really popular.  I’m not sure if that has taken hold yet, but it was fun watching her try to perform with intensity.  She reminds me a lot of Yokoyama Yui from Team 8.  She isn’t the type I usually latch on to, she is too “baby-ish”  But she seemed to be in front of me quite often. 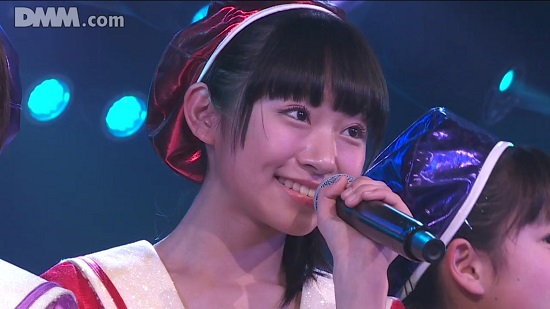 Yamauchi Mizuki: If I could pick a girl aside from Zunchan who I think has that “star potential” it would be Mizuki.  She looks really polished while performing, expresses herself nicely, and has a very pretty smile.  While I watched the stage I could tell many members needed a lot of work, but not Mizuki.  I think she is ready to be promoted to a regular team.

Homma Mai: There were two short-haired members who spent a lot of time in front of me (Umemoto Izumi being the other one) but Mai stood out as having the more commanding presence.  However, I didn’t notice her smiling that much.  It was like she was concentrating very hard on the performance.  On the other hand…

Yasuda Kana: always had a big, goofy grin on her face.  And she was one of the few members all night who seemed like they were making an effort to appeal to me in the audience.

Finally there was Kurosu Haruka, who spent a lot of time in front of me, and Nagatomo Ayami, who looks like AKB’s version of Tashima Meru.  I want to say I liked Asai Nanami too, but I can’t remember specifically why.  The rest either didn’t spend much time near me, or didn’t make much of an impression on me.  That includes Mutou Orin, who I didn’t really see until the end.  She’s not really my type of idol anyway.

I decided to push really hard for the encore, since I had a couple drinks in me, and I was in a slightly rambunctious mood.  The girls came out and performed River, and Sakura no Hanabiratachi, before finishing with the new single.  The members were wearing sashes with their names on them, and I made a mental note of every member who stood out for me so I could talk about it on this post.  I really lucked out with the high wave, as for some reason they made our row wait until almost the very end, and we were relatively close to the stage.  So I got to watch the members react to the fans for a long time.  Finally it was our turn.  The girls pretty much played it straight with me, although a few may have raised their eyebrows at the foreigner in the line.  Of course that all changed with the big reaction from Zunchan at the very end, which pretty much confirmed that I picked the “right girl” to root for from the get go.

And that was it, I was out the door.  I got my backpack out of my locker, and I was out of the Donki to meet a couple of friends for a nightcap.  At the end of the day, I am really happy I am occasionally winning shows again.  Hopefully that continues.  I have been a fan of this group since 2007, and it was the theater shows that got me hooked.  Without the theater shows, the group is just less interesting to me.  Maybe that isn’t so important anymore to the powers that be since the group has such a huge fanbase.  But to me, it is vastly important.  More than big concerts, more than 2-shot events.  It is the theater that originally set this group apart.