Over the past couple of years I have been expanding my J-pop horizons and paying attention to artists beyond the 48-sphere.  I have mentioned being a fan of the idol group FESTIVE a few times on this blog, as well as Minyo Girls, Chaki (who actually is a former SDN48 member)  I also like a group called Tokyo CLEARS, and even spent some time last year going to P.A.R.M.S., the home of Alice Project.  I don’t get into new groups easily.  Usually there needs to be some kind of “spark” that needs to happen for me to proverbially “fall for” a group.  That spark actually occurred a few weeks ago, when I happened to be hanging out in Diver City.  Let me backtrack to the end of Golden Week…. 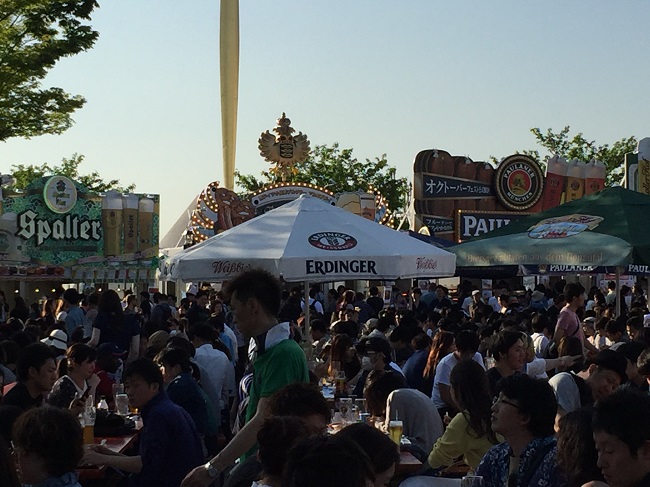 I had gone to Odaiba since there were multiple festivals happening there simultaneously.  I had mainly gone for the Cinco de Mayo event, but there was also a German Beerfest, a Gyu-Fest, and a Hawaiian Festival all happening within walking distance from one another.  Additionally, Diver City had an Idol Stage set up, and I just happened to be walking by when a cute idol group was performing.  That idol group was KissBee… 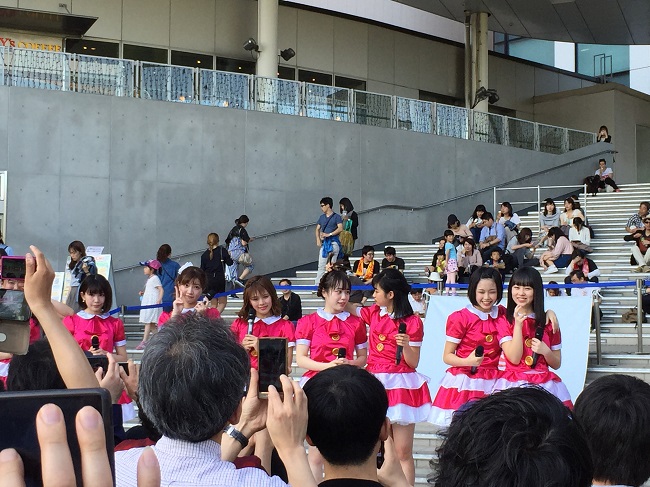 They were wearing these cute, red, almost Christmas-like costumes, and were playing standard J-pop tunes.  I stopped to watch since I didn’t really have anything else to do at the moment.  I wanted to see if they would capture my interest.  As I scanned the girls on stage, one immediately caught my eye.  She was full of energy, dancing all over the stage.  She had a short-bob haircut, kinda like Maeda Atsuko, of Kodama Haruka from HKT48, and a cute little baby face.  I found myself zoned in on this one member, and at the end of their show, when they offered fans the opportunity to take pics, I mainly focused on her.  I was hooked, she got me. 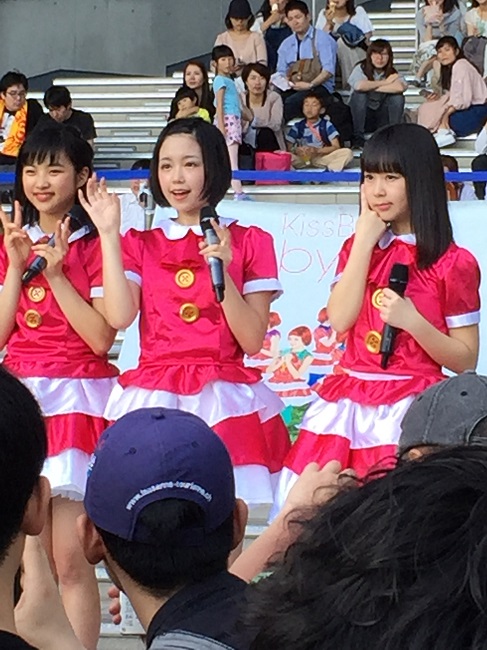 the show ended, and I was thirsty, so I went to get something to drink.  However, I came back and they were still doing handshakes, cheki’s and other benefits.  I contemplated participating, and quickly looked the group up on the web to see if I could figure out the name of the member I liked.  Her name was Tanifuji Misaki.  MISAKI????  TANI???  Was it fate that this girl shared names with two idols I am a big fan of.  (Although she uses a different kanji for the “Mi” in Misaki)  However, before I knew it they were doing last call, and I didn’t get to participate.

A short time later I decided to head back home.  In the meantime, while on the train I posted a few of the photos I took onto Twitter, and linked the group, and Misaki.  And whaddya know, I started getting a ton of likes from quite a few of the group members.  This was too good!  I was already making a connection with them.  I wonder if they noticed me watching in the back?  I vowed to see them again if given the opportunity, and made a note to check their schedule.

Fast forward to one month later.  KissBee has done the occasional performance, but they usually conflicted with other plans I had.  I almost saw them last week in Shinjuku, but the friend I was with wanted to go to dinner instead.  However, last night I just happened to catch Misaki-chan retweeting their appearance scheduled for Sunday in Odaiba.  I didn’t have any plans all weekend, so this would be perfect.  I needed to head out to that area anyway since I had lunch plans with a friend from the U.S. 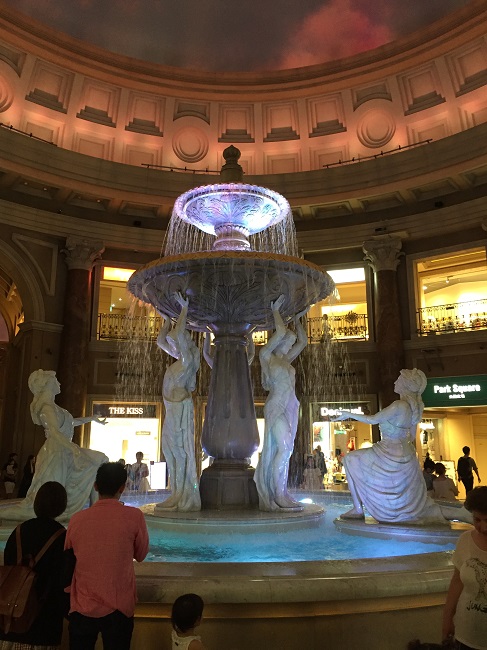 I made it out to Odaiba about an hour before the performance.  Actually, they had an early performance too, but it conflicted with my lunch plans.  It was my first time checking out Venus Fort.  Wow, what an awesome mall.  So beautiful.  It reminds me of the mall that connects to Caesar’s Palace in Las Vegas.  Eventually I found where the live would be taking place.  They had a table set up to buy CDs and other merchandise, so I asked them how the system worked.  From what I gathered you could get a 2-shot cheki with two tickets, and the girls do handshakes and sign stuff for one ticket.  I decided to buy three copies (there were five versions) of their new single “Labyrinth” so I would get a cheki, and one handshake/sign.  I also got a priority entry ticket for the event, I was #74. 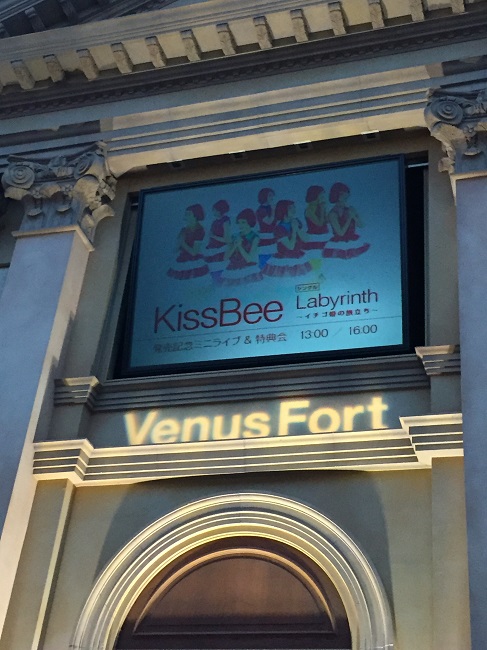 Thirty minutes before the show I went to queue up.  It was strange, though.  There weren’t even close to 74 people queued up.  It was more like 30-40.  Moreover, NOBODY had a number over 50.  Eventually a guy showed up with a number in the mid-50s, but that was it.  Why the heck did they give me such a bad number?  It didn’t really matter though, I wasn’t trying to be in the front anyway.  So I basically waited for everyone to go in, and I went in last.  After that they opened the area to let anyone in to watch.  I shuffled back a little bit to let two cute, but petite girls get in front of me to have a better view.  The show started fifteen minutes later… 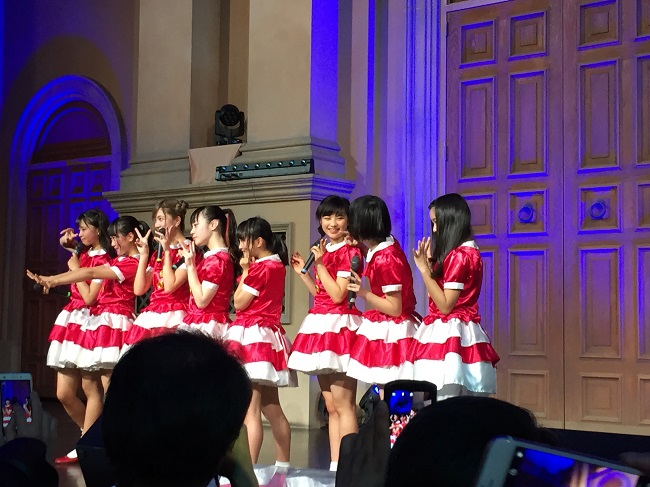 Misaki-chan is definitely one of the “centers” of this group.  She is in front quite often, and sings a lot of solo parts.  However, I would say most of the members are energetic.  Their songs are for the most part, medium-tempo idol tunes.  However, they had one up-tempo song song in particular that I absolutely loved.  It had a latin-beat to it, and the chorus went something like “Kiss me, chupa chupa, Love me, chupa chupa”  I still don’t know the name of the song though.  Ultimately they sang five songs, and did a couple of MCs.  The new single is a really nice song too.  Please give it a listen…

Like I said, the show ended with a photo-op, and then a high-touch session.  They had one brand new member who wasn’t in costume, but participated in the high-touch, and she probably gave me the best reaction.  However, Misaki gave a good one too.  After that it was on to benefits.  They started with a “Group Shot” where you take a photo with the whole group, and decide which member(s) are seated next to you in front.  I contemplated doing this, except 1) they use a large cheki camera, and those don’t fit into my cheki scrapbook, and 2) they cost four tickets, which was kinda steep.  I would stick to the original plan. 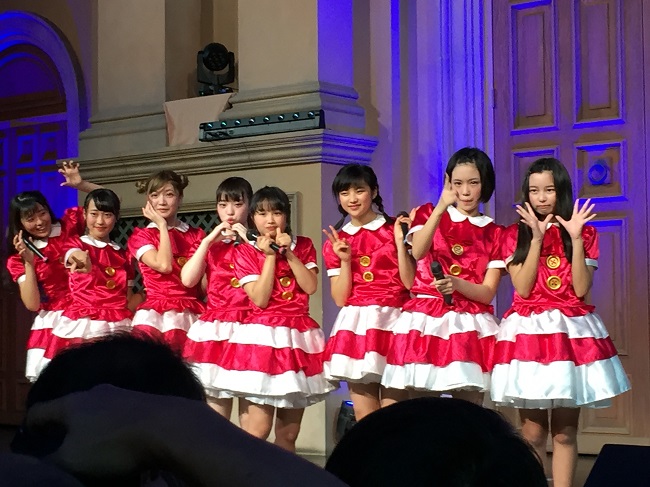 Next they announced 2-shot chekis  It was one queue, and when you got to the front you told the manager who you wanted to see.  The line was surprisingly short.  Of course I asked for Misaki, and she skipped over to get me.  In the meantime, I was telling her the story about Golden Week, and the twitter likes, and all the while she kept exclaiming how good my Japanese was.  I’m not sure if she remembers me from last month, but she kept laughing at the story.  In any case, my cheki was done, I shook her hand (she grabbed my hand with both of hers) and I headed off-stage.

Eventually it was time for the handshake/signings, and the girls formed their own individual queues for that.  I lined up again for Misaki.  I contemplated having her sign one of my CDs, but instead opted for her to sign my cheki.  The first thing she asked me was if I lived in Tokyo.  I told her yes, I live in Itabashi.  She kinda shrieked in a gleeful way.  Perhaps she lives nearby?  I then asked her which single the “Kiss Me, Love Me” song is on.  She said it wasn’t on any CD.  I gave her a little frown, and she told that meant I have to come and see them more often to hear it performed live.  I thanked her for the signed cheki, and she once again complimented my Japanese, and I was done. 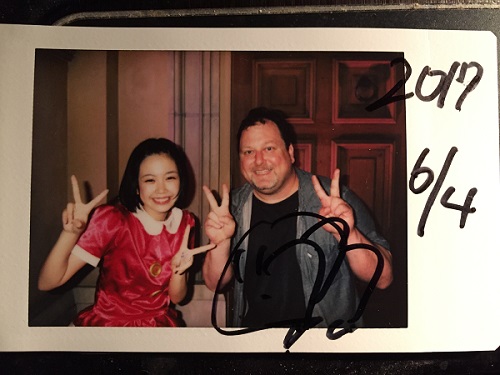 On my way home I again tweeted a few photos from the event, and an hour later I got another “like” from Misaki.  It was a lot of fun, and I am really happy I went to see them.  I checked their schedule, and they are performing at Shinjuku Reny on Thursday.  FESTIVE will also be there, so I think I am going to make an appearance.  Perhaps I will make Hinari from FESTIVE a little jealous if she sees me hanging out with Misaki-chan.

Oh, and check out their official site: kissbee.net