Continuing an extremely busy week, I headed over to Shinjuku ReNY to check out Idol Super Live Vol. 19, which featured over twenty different idol groups.  As I have mentioned before on this blog, I usually only go to these types of shows when there are AT LEAST two different groups I like, since the admission is not cheap.  This way I feel like I am getting more value for my ‘idol dollar’, even if ultimately I am going to spend more to get the benefits for each group.  This particular show would be featuring two idol groups that I really like, FES☆TIVE and KissBee.  So this was perfect, two groups.

I have been following FES☆TIVE for two years now, ever since I saw them for the first time at J-Pop Summit in San Francsico.  On the other hand, I am relatively new to KissBee.  This was only the third time I would be seeing them, and the second time was just a few days ago.  The two groups were scheduled an hour apart from one another, which was perfect.  I would see KissBee at 7:10, and then visit their booth for handshakes and 2-shots.  After that I would go see FES☆TIVE and do the same thing.  The only issue was that I finished with my part-time job at 2:30, so I would have 3-4 hours to kill before the show.  But no matter, I can easily find ways to waste a few hours.  After going to Dotour for coffee, Excelssior Cafe for Tea, and The Hub for a quick snack and cocktail, I headed over to the show.  I would get there a bit early to get my bearings before KissBee started their set.  However, I was not aware that there was another idol there who I have a bit of history with.

ReNY is a pretty cool venue, and it does A LOT of idol shows.  Their stage and sound system is great.  On the other hand, the lobby where the groups do the post show benefits is very small, and there are usually around five groups selling stuff at any given time.  It makes for some pretty tight quarters.  I showed the ticket taker my reservation, (which also got me a 500 yen discount)  paid for my prerequisite drink ticket, and I was in.  I would first check out which groups would be at which tables.  As I passed through the entrance there was a group immediately to the left doing signed chekis and handshakes.  As I passed them I caught a glimpse of one member taking a selfie with a fan.  Jeez, she looks sort of familiar.  I turned to get a better look.  Our eyes met and she smiled at me.  It had been over a year, but I was pretty sure I knew this girl.  So I asked the group’s manager (in Japanese) how much a signed cheki cost.  He tried to answer me in English (one-hundred yen) which I knew was wrong, he switched to Japanese at that point.  I then asked him the name of the blonde girl on the left.  He immediately responded “Yuki…..” and I finished his sentence….

Yuki Himeri is a former member of Alice Project who graduated over a year ago.  Araki Himeri, as she was known in A.P., was my favorite member, and her departure is the reason  I no longer go to P.A.R.M.S.  I started following her new twitter, and knew that she had been doing some gravure modeling.  I was also aware that she had recently joined an idol group.  However, I had no idea that they were at this show.  I paid for my cheki, and waited my turn.  The manager called to Himeri, and she came bouncing over in the exact same fashion she used to when I would see her at P.A.R.M.S., as she loudly exclaimed “Kurisuuuuuuuuu!!!!!!!!!”

The manager gave us a ton of time to chat, and we spent that time catching up.  I told her how much I had missed her, and I had hoped to see her again one day.  I also told her about some of the changes in my life since we last met.  I didn’t see her group actually perform.  Their name is “Nopuran” (No Plan)  She actually asked which group I was there to see.  However, for the most part we just kept squeeing at one another and flirting while she did a major number on the cheki. 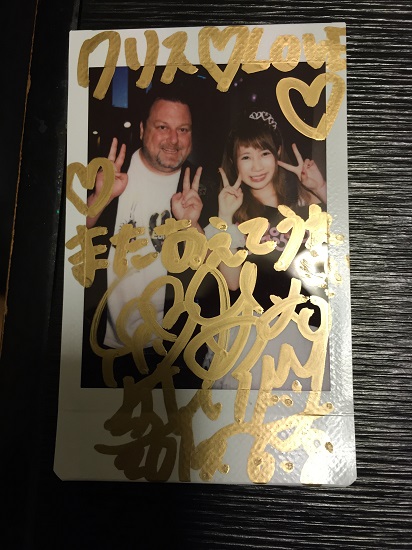 Himeri then offered to take a selfie with me as a free extra bonus.  Of course I accepted, although I wasn’t sure if it was free or not.  But I figured even if she asked for another thousand yen it would be worth it.  My time was finally up, and we parted ways.   But I was soooo happy.  I really liked Himeri, and I did miss her since she was always so much fun and always made a big deal out of it when I came to see her.  And by the way, she looks really hawt with the blonde hair. 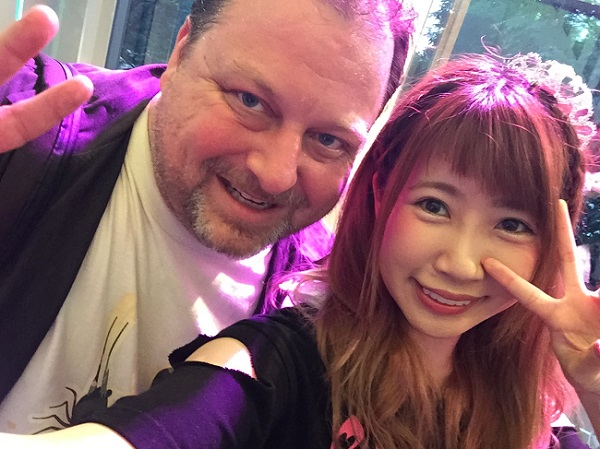 I headed deeper into the lobby, passing idol groups looking to attract customers.  I was admiring my Himeri cheki when a random guy came over.  “You are here to see KissBee?”  It turned out he was also at the Venue Fort show I went to last weekend, and he saw me there.  He is also a fan of Tanifuji Misaki, just like me.  I  got a few nods from some of the other KissBee fans after we went into the actual hall, so I guess a few of their fans noticed me on Sunday.  But before KissBee came on I watched a group called Diamond Luffy, who were actually really talented.  Once their set was done I grabbed a good spot on the right side for the KissBee performance, which was three songs and an MC.  However, they performed my favorite song of theirs.  I’m not sure of the title, I just call it the “Love Me Kiss Me Chupa Chupa” song.  I got a quick smile and wave from Misaki-chan after the third song.  Afterwards I immediately went out to do handshakes, 2-shots and whatnot.

They started with a free high touch, which I was happy about since it gave me a chance to quickly talk to a couple of the other members that I like.  First of all Sakura, who is always “liking” my tweets when I mention KissBee, then Rena, who I would probably call my 2nd favorite of the group.  Anyway, I thanked Sakura for “liking” my twitter posts, and told Rena that she was awesome!  I got great reactions from both of them, especially because I addressed both of them by name.  Afterwards we lined up for individual benefits.  I chose to do a cheki and a shamekai.  While in line I was talking to the guy I met earlier,as well as another KissBee fan who was fluent in English. I had forgotten that their manager takes the chekis ‘sideways’, which I don’t love.  On the other hand, he takes the shamekai at a weird angle too.  However, they actually look kinda cool.  Misaki was excited that I came back to see them again, and I told her I was happy they sang the “Chupa Chupa” song again.  She also asked if I was American.  I told her I was from California, but I live in Itabashi now.  She laughed, “Oh, that’s right, you said it before!”  One of these days I need to tell her my name.  After our second interaction, it was almost time for the FES☆TIVE set, so I headed back into the hall. 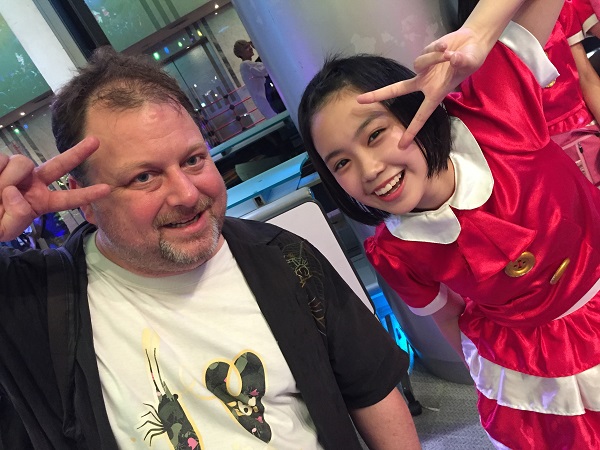 The hall was a lot more packed for FES☆TIVE, but I waded my way into the fan cheering area, and got as close to the stage as I could.  Unfortunately I got stuck behind this obnoxious group of kids that I see at every  FES☆TIVE show these days.  But whatever, I would just focus on cheering for Hinari.  By the way, most of the groups get about fifteen minutes to perform, but I guess FES☆TIVE  was considered a headliner, since they were one of the few groups who actually got a 30-minute set.  I had my orange glowsticks, so I managed to get Hinarin’s attention despite the fact that I was fairly far back.  One of the songs they performed was their second major single, “Kingyo no Kin-chan” which is a sing about a goldfish.  It is very cute.

Anyway, the show finally ended, so I headed out to grab a Hinarin cheki ticket.  The line for benefits got really huge, going across two other booths with some less popular idol groups.  One of those groups is called ‘Death Rabbits‘, and features three idols and a big dude in some kind of Stormtrooper outfit.  Outrageous!  In fact he came over to me and started talking to me for a few moments while the girls were waiting for customers.  I actually caught a few moments of their set since they were on right after KissBee.  My first reaction was “WTF?”  Also, while I was waiting in line for Hinari all of the members of KissBee walked right by me as they headed out of the club, and I got waves and reactions from all of them…especially Misaki.  My turn to see Hinari eventually came.  And she had something she wanted to tell me…

Death Rabbits (or is it Desu Rabbits?) LOLZ

After greeting me and thanking me for coming, she asked me if I went to the Wasamin event with Matsui Sakiko on Sunday.  (Hinari knows I oshi Wasamin)  Apparently Hinari was there and saw it, although I didn’t understand what the circumstances were.  Hmmm, I wonder if they spoke, and if my name was mentioned?  Anyway, I told her that I didn’t go as I had plans with a friend that day.  (That is also the day I went to see KissBee, but I ‘conveniently’ left that part out)  But Hinari was excited to tell me that she saw Wasamin.  In the meantime I gave her the update on my Japan residential status, and I got a big “High Five” 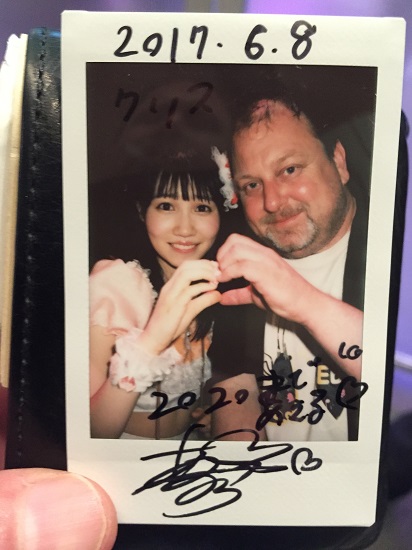 I wasn’t going to deal with Hinari’s crazy line again, so I decided to just limit it to one cheki.  I had already spent plenty anyway when you consider admission, benefits for three groups (not to mention dinner and drinks)  Instead I went back into the hall since a group one of my friends kinda likes, Disdol was about to play.  However, when I got in there the groups were running very late.  So instead I watched El Float, who weren’t bad.  It was getting late though, so I decided not to stick around.

Needless to say it was a great night.  An idol-trifecta, if you will.  It made me think that I should go to see these idol showcases more often, especially at ReNY since it is a really nice venue, and it is very close to where I work and take classes.  Of course that is a dangerous thought, as far as my wallet is concerned.  So I will likely stick with my plan of only going to those shows when I can see two or more groups that I am interested in.  Unfortunately for my wallet my ‘stable’ of idol groups I am interested in is steadily growing, and now I have to add Nopuran to that list since Himeri is an active pop-idol once again….