Although it is late, I am tired, and I have a ton of work to do, I need to get this post done now since Wasamin’s big concert weekend is coming up tomorrow.  Speaking of Wasamin….

It has been almost eight weeks since I have personally interacted with Misaki-chan.  The last event I went to that had any sort of “meet and greet” was her Karaoke party in late May.  Since then the only time I have seen her perform was at her play in Osaka, but even that was over a month ago.  Since Wasamin doesn’t really have any new products to promote and sell, I guess she is taking a bit of a break from fan events until her new “memorial version” of Saba Kaido comes out in late August.  So what’s an idol fan to do when his kami-oshimen is hiding out and not actively doing events???

He goes to see other idols of course.  And that is precisely what I have been up to, especially over the last three weeks or so.  It turns out that a few of the “other” idol groups I like have new releases coming out this Summer, and they are out actively promoting their new products.  This means there are many mini-lives to attend, and quite a few of them are free admission performances.  Since I like to aim for the free performances, this has kept me quite busy in July.  So who have I been going to see?

As I mentioned recently on this blog, this is the group I stumbled upon in Odaiba during Golden Week, and I was totally taken with their “ace” member, Tanifuji Misaki.  They are promoting a new single that isn’t coming out until late-August, and they have a huge schedule of free appearances beginning in July, all the way to release week.  Furthermore, they are offering all sorts of bonuses, depending on the amount of events you attend AND the amount of CDs you buy.  The first event I went to was outside of Diver City, the exact same place I ran into them the first time I ever saw them perform… 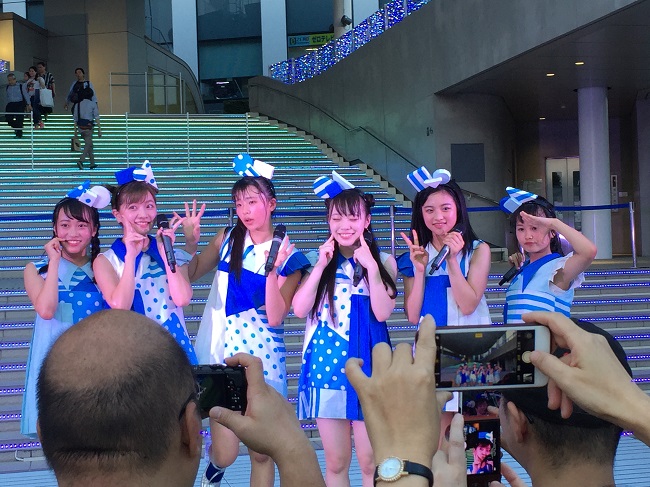 Unfortunately Misaki-chan had announced the previous evening that she wouldn’t be at this particular event because of a scheduling conflict.  But I took that as an opportunity to meet a couple of the other members I like,  Specifically, Otawa Sakura and Oe Rena. 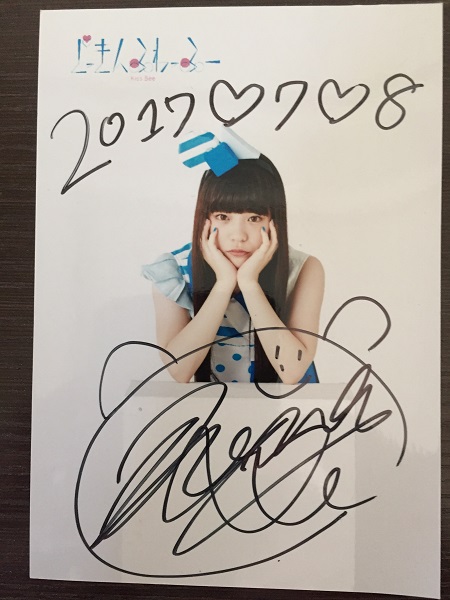 They were both very nice, but I really like Sakura a lot.  She reminds me very much of former AKB48 member Nishino Miki, both in looks and personality.  Unfortunately, I have already gone “all-in” on Tanifuji, so while I may go see her once in a while, she is not the focal point of my attention to this group. 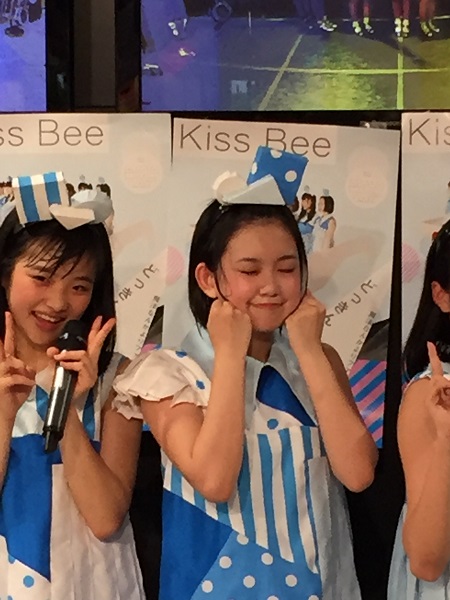 I got to catch up with Misaki-chan at the next KissBee event I attended, which took place at Village Vanguard in Skytree Town.  This was a weird event for a lot of reasons.  First off, the management of the shop insisted that the music be performed at an extremely low volume.  I mean this is supposed to be a live event, but they somehow didn’t want the performance to interfere with anything else going on in the shop.  It was really ridiculous.  The second problem was that there was something terribly wrong with the sound system.  It got so bad that the girls eventually had to abandon their microphones and sing without them. 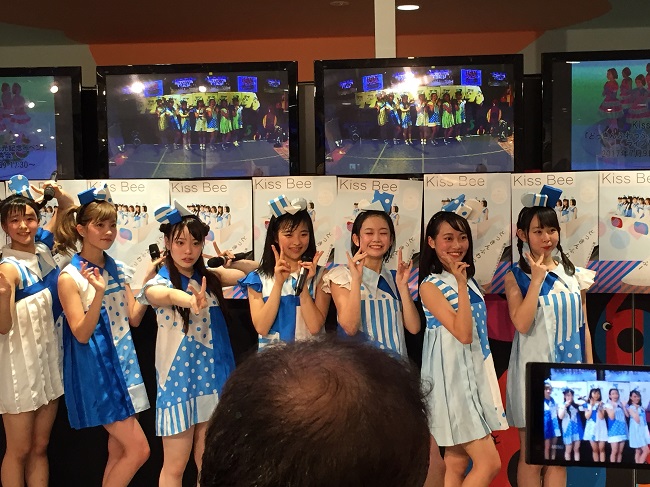 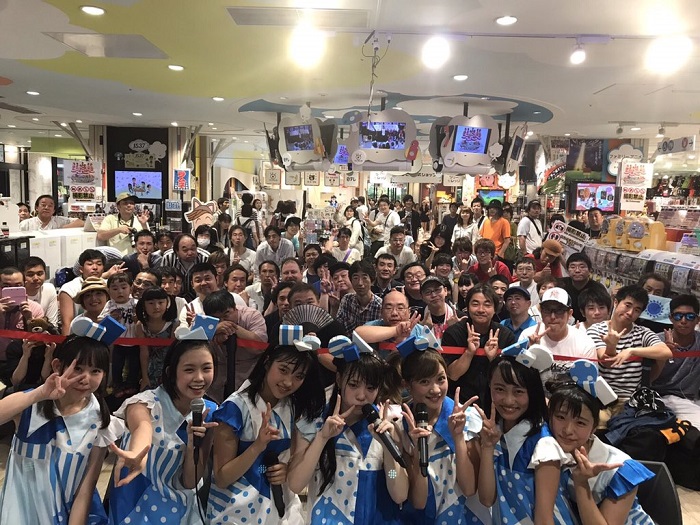 Eventually the show came to its merciful end, and it was time for perks.  Like most groups, there is something quirky about their cheki/handshake system.  One ticket gets you a handshake, plus a signature (on a cheki, or picture)  Two tickets get you an unsigned cheki, which makes a signed cheki rather expensive.  They also offer a ‘group shot’ for four tickets, of a shamekai for one ticket.  However, those two items are off the table for these free events. 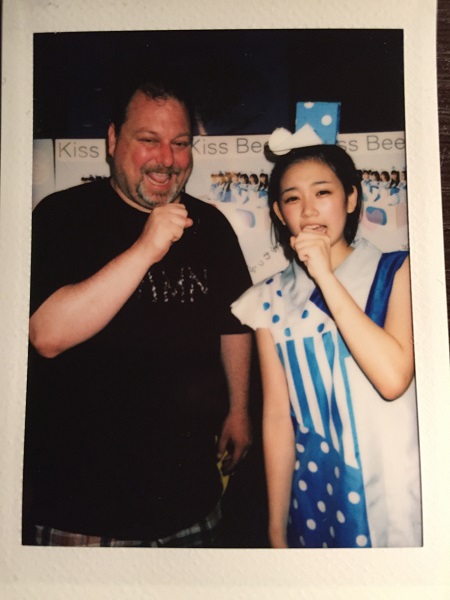 I took the opportunity to catch up with Misaki-chan and take a cheki.  When I told her that I went to Odaiba, she asked if I had read her blog.  I told her I did, and that I wanted to see KissBee anyway.  She also apologized for the microphones being shitty.  I told her it was funny.  I had one more ticket, and since the girls are giving fans signed photos, I decided to visit a girl that I hadn’t met yet, and was making a lot of eye contact with me during the show.  She is a newer member in the group, and her name is Maeda Rion. 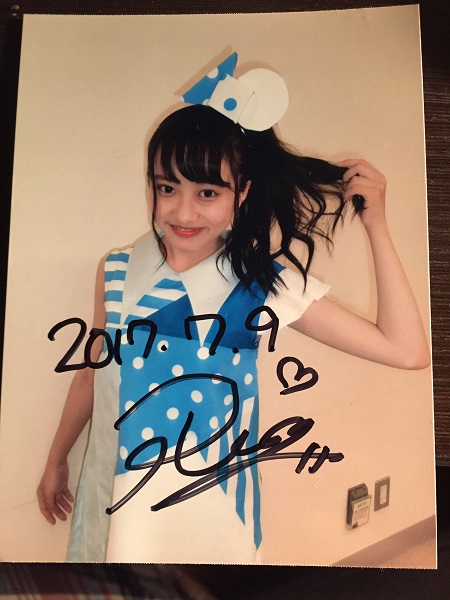 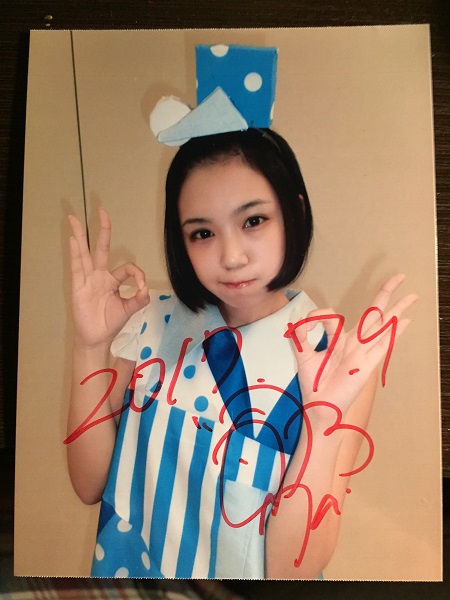 She didn’t have anyone in her line.  She watched me as I slowly walked toward her, almost pretending like I was just randomly walking around.  I then surprised her by pulling out the ticket.  It was kinda funny.  Anyway, she isn’t a very popular member, so I think she was just pleasantly surprised a came to see her.  Eventually I want to meet…well most of the members. 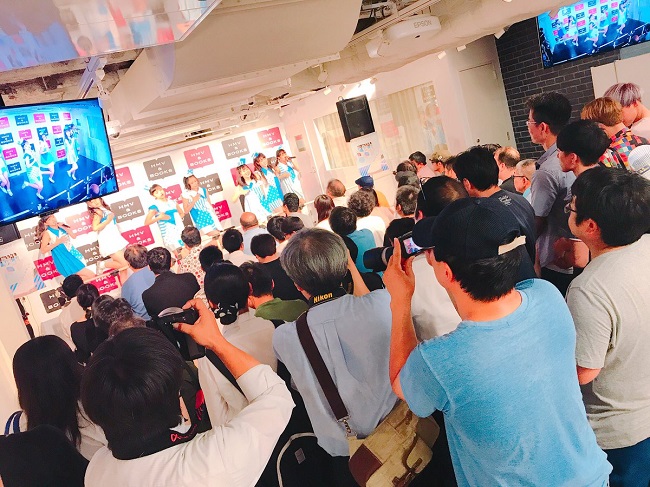 Yesterday I caught KissBee at HMV-Shibuya/MODI, which is quickly becoming a popular place for live events.  I have seen Wasamin here, as well as FES☆TIVE, and Chaki twice.  Once again, they had all sorts of issues with their sound system.  Only this time I think it was due more to the incompetence of the sound engineer.  The music was far too loud, the microphones were totally uneven, and a couple had feedback issues, including Tanifuji’s.

Another bonus they do at most of their lives is play Janken with the fans for a chance to win a signed poster.  In addition to that, some of the chairs had a special letter from one of the members taped to the bottom.  Unfortunately, I was not one of the lucky winners, and I am yet to win the poster Janken.  Hopefully one day I will get lucky. 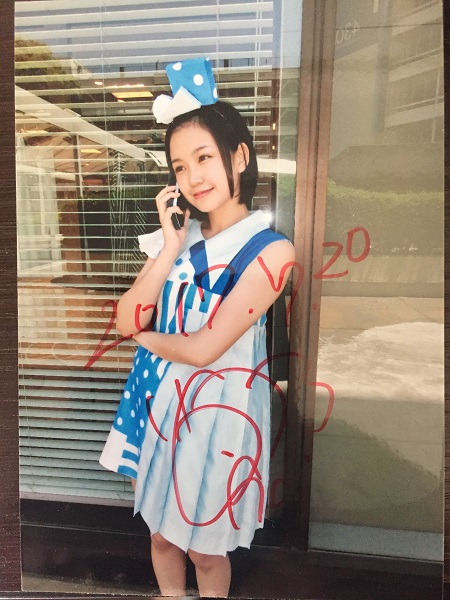 I used all of my tickets on Tanifuji this time, getting a cheki and a signed photo.  I told her I saw the new music video they did with Sanrio, which may or may not be the new KissBee single.  (I think that’s what she told me)  I also saw this wacky video where she and another member played this weird batsu game with some British Vlogger.  It was funny because she tries to speak English in it.

The good news is that I am beginning to make friends with some of the KissBee regulars.  They have been following and talking to me on twitter.  Not to mention, Misaki-chan likes any KissBee related tweet I make.  In any case, quite a few lives on the schedule, so I am sure I will be seeing them a bunch more… 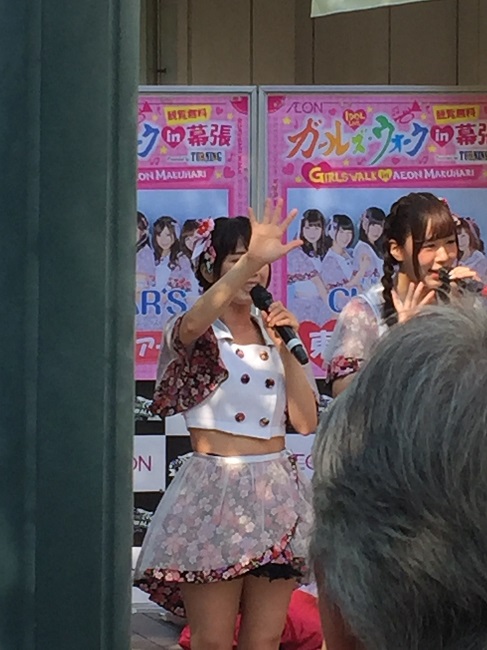 I had really missed seeing Rion, so I am glad I have had a few opportunities to see Tokyo CLEARS this month.  The first show I saw was at Omotesando Ground.  There were quite a few other groups playing that night as well, including Idol College, and Hyper Motivation, which I really liked too.  CLEARS were the third group to perform, but what I didn’t know was that this was the kind of show where all the sales booths would be occurring after the show.  This meant I would have to wait almost 90 minutes before I could see Rion.  I decided I didn’t want to wait that long, so I took off after their set.  But not before seeing the group walking through Omotesando picking up trash, since being “environmentally responsible” is their entire M.O.  I suppose I could have gone over and helped them, but I didn’t want to intrude.  Anyway, I would make it up to them a few days later…

The following weekend CLEARS were doing a free live at the Aeon Mall Makuhari.  They were the headlining act, and among the other three groups performing was an idol unit called Barbee, which features former AKB kenkyuusei Sakamoto Rio.  Unfortunately, I read a few days later that Barbee will be disbanding next month. 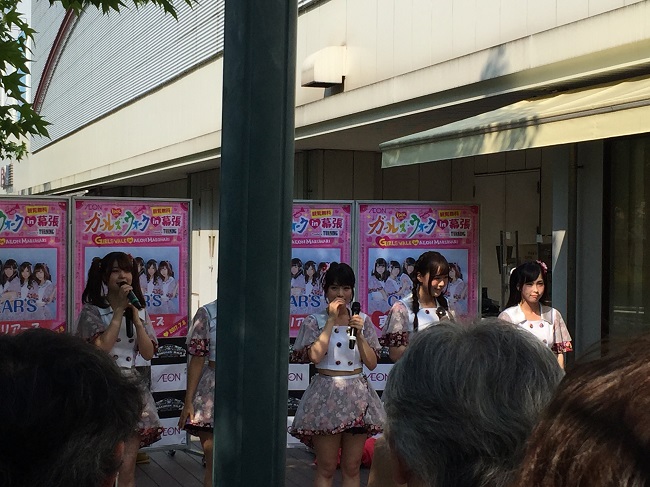 The biggest issue was that the show was going on outside, and it was an extremely hot day.  I’m not sure how many of you have experienced Japan in the Summer, but the weather sucks.  Hot, humid, sticky, just totally unpleasant.  I had decided that I wouldn’t even bother with the other groups, and would simply wait for CLEARS to come on before going outside.

It wasn’t too large a crowd, and there was a little girl who couldn’t have been older than seven, and is evidently a huge CLEARS fan.  She knew all the dance moves, and knew all the songs.  She was really amazing to watch, and management let her stand in front of the barrier between the group and the fans, so she got a lot of attention from the girls too. 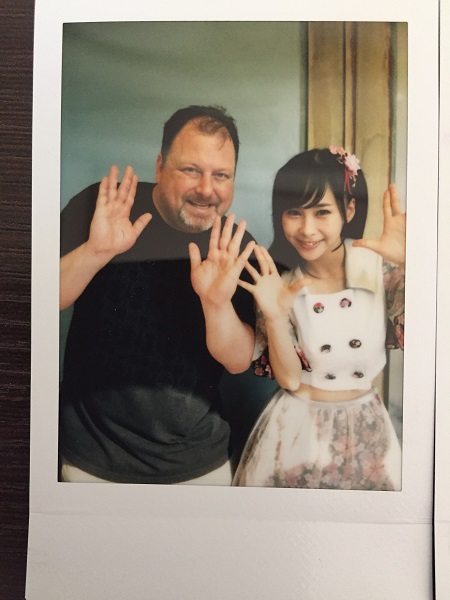 I decided to take a cheki with both Rion and Sayuri, since Sayuri has been especially attentive to me lately.  She is really a nice girl too, and she does all the right things to make me want to oshi her.  Even when they are performing she pays a lot of attention to me.  But, like with Tanifuji in KissBee, I am “all-in” with Rion, so Sayuri will always play second fiddle.

CLEARS weren’t promoting any new single since their latest release came out a month or two ago, but they are promoting a new venue in Naka-Meguro they will be appearing at regularly.  So that’s exciting, and I look forward to seeing them perform there.

I still have two more groups to talk about, but this post has already become long, so look forward to Part 2 coming VERY soon.