This is my “low key” handshake event for this single, and the only one of the three days of events I am attending this weekend.  AKB48 puts on so many more events per single than they did back in the day, so these days my M.O. is to get tickets to two events, one being my “main” handshake event with more tickets, and then my second handshake event, with fewer tickets. In this particular case, fewer tickets meant ten, including one “open” ticket that I could use on any eligible member. I had also condensed this day into three slots, so I wouldn’t be in Makuhari all day. Actually, it was originally four slots, but…well, you’ll see…

The real bummer of the day was that I could not get any tickets to see Yamane Suzuha. I didn’t realize when I originally applied, but today was Zunchan’s birthday, so her tickets sold out very quickly, and of course I couldn’t use my open ticket on her either. It’s too bad, because if I had known I would have picked tomorrow or Sunday to go instead, but I had already won tickets for the 11th, so I was kinda stuck. Oh well.

Anyway, I got to Makuhari at 11:15, grabbed lunch by the station, and made it to the venue just before noon. I didn’t need to get my tickets stamped since that was already taken care of last month.

Akiyoshi Yuka (Lane 40) <2 tickets> Yukachan was a bit late to the slot. In the meantime the guy in front of me was desperately trying to communicate with Rikopi, and then Aramaki since they were in the neighboring lanes. So I got a quick greeting from Rikopi (who didn’t know I was coming over to her lane right after) It was good timing, since they had just started debuting the B-side music videos from the upcoming single on the big screens. Akiyoshi eventually came out, and I was second in line. So I told Yuka that I had finally graduated from my University last weekend when HKT was at Tokyo Idol Fes. She congratulated me, and also invited Rikopi over to congratulate me too, which was nice. I told Rikopi that I would be over in a minute. In fact my second ticket for Akiyoshi was a continuation of my conversation with Rikopi, so…

Sakaguchi Riko (Lane 41) By the time I had finished with my first Akiyoshi ticket, Rikopi’s lane had cleared out, so I jumped over into her lane. The first thing she said was that when she saw me in Yukachan’s lane, she hoped I was coming over to see her too. At this point it was almost time for the debut of her MV from the upcoming single, so I told her I looked forward to watching it.

So the funny thing was, at this point all of Rikopi’s regular fans checked into the lane, and then they held the line up so Rikopi could watch the video. The guards were watching it too. I was standing in the area before check in for Akiyoshi’s line. After the MV we all gave Rikopi a big ovation, including her guards. LOL. Anyway, I asked Yukachan what she thought of Rikopi’s song, and then I told her that I really liked Sasshi’s MV. I had more tickets for Yukachan in a little bit, so I left it at that…

So for my open ticket, I had a few ideas. For some reason I had neglected to get a Tani ticket for this event, so she was a possibility, as was Zukki from 16th gen, since I consider her my favorite AKB kenkyuusei not named Zunchan. But then I noticed that Masanya’s lane was *starred* as well, at least in this slot it was. So I stood in front of the SKE area trying to decide, and if I was going for Tani or Masanya I had to do it in this slot, as they weren’t *starred* for Slot 4. At the end of the day, I have more Tani tickets for the next SKE event, and the next AKB single. This could be my last chance to visit Oya, so…

Oya Masana (Lane 170) Not surprisingly, Masanya’s queue got pretty big once they allowed oshimashi and open tickets in. So I checked in and waited. I didn’t have much to say to her, I just wanted to see her at least one more time before she graduated. I mean there is always the possibility of a National event, but no guarantee of that either. Essentially I just continued the conversation we had less than two weeks ago, and told her a little more about the circumstances behind me moving to Tokyo. So that was cool, and then I said I hoped to see her again. You never know, right?

I decided to stay in halls 7-8 since I had another SKE ticket in the next slot. In the meantime I ran into a bunch of people I know, including @Jeff86 . So we passed the time catching up, and comparing tickets. He was seeing SKE members almost exclusively. Later I ran into a bunch of other overseas fans I know, including BigC, who was hanging out near the Sakura lane (no surprises there) and Pandadash. This was also the point where they started simulcasting the NicoNico broadcast of the Janken preliminaries, which pretty much took the next 2-3 slots.

I should also note that I had virtually no trouble with my tickets, which were the last of my tickets to have my name in Katakana. It makes me wonder if I really should have changed them after all. Anyway…

Matsumura Kaori (Lane 174) It was pretty much a quick ‘hit and go’ with Kaotan today. I spent more time trying to hide from Tani in the next lane, since I didn’t have tickets for her. (I also didn’t have any Bibian tickets, and she looked really cute with her black and yellow outfit) Anyway, I just told Kaotan about my graduation, and she confirmed I was transferring to another school, and then she asked me a couple other questions I didn’t understand. I just nodded affirmatively, LOL. 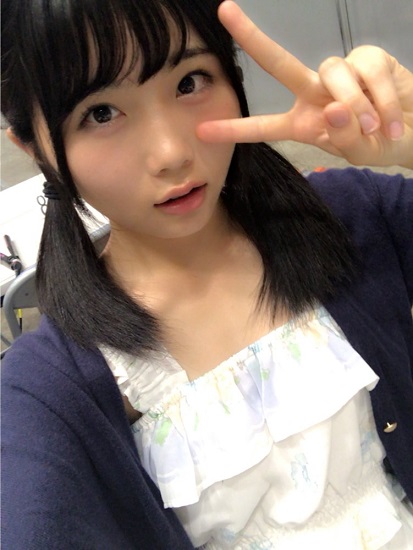 Akiyoshi Yuka (Lane 40) <two tickets> Back over to the other hall to see Yukachan, it turned out this would be out ‘English Slot’. Again, she asked me in English what I planned on eating for lunch, so I told her I already had a Subway Sub. “An Ebi sub, and fried potatoes”, I added. I immediately looped the line since I wanted to get out of the venue and take a break. I wanted to ask her something in English to see how she responded. I was struggling for a good question, and then blurted out something stupid. “Yukachan, I have a question. Can you tell me where Spider Tower is located?” Now the problem wasn’t that she didn’t understand me. The issue was that she had never heard of Spider Tower. LOL. I thought that it was like a well-known building. Anyway, she told me in japanese that she didn’t know where it was, so I told her it was in Nagoya. Anyway, we both laughed. But I need to come up with better questions for her to answer in English.

And with that, I took a break.

I had three tickets left. Two in Slot 5, and one in Slot 6. But then I realized that the member I had the Slot 6 ticket for had a starred lane in Slot 5. Well, I can just jam all of these tickets out in one slot, since none of them would have long lines, and then I could get out of there early. So that was the plan. 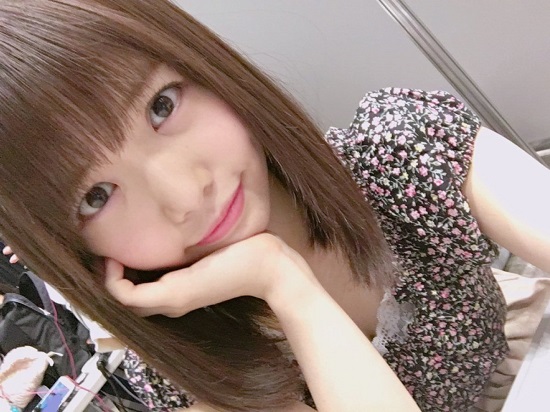 Fuchigami Mai (Lane 37) For some reason I just wasn’t in that talkative a mood today. I kept struggling with what to say or ask each member. So whan I got to Maichan I simply asked her about her janken unit, since the janken prelims were still playing on the screens. In fact, Yukachan’s group had just come on while I was standing there. Anyway, Maichan asked me to root for her duo with Haruppi, which I had forgotten about LOL. I told her I would, and I would see her later.

Sakaki Miyu [CUCA] (Lane 91) I forgot to mention that in Slot 3 when I was deciding who to use my open ticket on, Cuca-chan waved to me from her empty lane. I’m not sure whether she recognized me from our meeting in July, since most of the STU members were waving at pretty much anyone who was looking their way. But I knew I would be seeing Cuca a little later anyway. So I headed over, and Cuca actually had someone in her queue. Nice, I hate to think that she is sitting there twiddling her thumbs all day. But I waited for the lane to clear out before I jumped in. She watched and waved to me all the way from before check-in. As I got closer, she had a look of familiarity on her face, so I knew she remembered me from before. I congratulated her on her Janken Duo with Sato Kiara, and asked what the name of the unit was. Jeez, they have a really long name. I commented, “Wow, that’s long!” (Maiorita Megami to Girigiri no Onna) Anyway, I told her a bought a bunch more tickets to see her for the next single, and she thanked me. Hopefully she will have a better draw.

Nakanishi Chiyori (Lane 108) This was actually a Slot 6 ticket, but since her lane was *starred* I could use it via oshimashi in Slot 5, which I did, and it saved me over an hour of waiting around. This was actually NOT the first time I have had an individual handshake ticket for Chori, as I got one for her around a year and a half ago. But I ended up blowing it off (along with a couple other tickets for Kaotan and Tanamin) since there was a special Wasamin cheki event that conflicted with my evening slots. I did get a chance to finally meet Chori at a Shoot Sign National event earlier this year, and she was really cool. So I looked forward to seeing her again. Anyway, it was really quick. I told her that I was rooting for her unit to win Janken since they had the best members, and then pointed to my Akiyoshi ticket holder. She laughed and said she would do her best to win, all the while being the usual fun and genki Chori that makes her a great handshake experience.

Actually, I am surprised Chori has stayed under the radar for me, because she is EXACTLY the type of handshake experience I really like. Perhaps it is because I spend so much time with SKE and HKT members at AKB single events, I kinda forget about the AKB members. It’s actually another drawback of having all the groups at AKB single events, it takes away from giving the AKB members, especially those that aren’t in Senbatsu, a chance to be the center of attention. Oh well.

And with that, I was done and it was barely past 3:30. 10 tickets in 3 1/2 hours, not bad. I found some friends who were also leaving, so we all went back to Tokyo together. And now there is a bit of a lull between handshake events for me. New AKB single events don’t begin until October, and the next SKE and HKT events aren’t until late-November. I’m not sure if I will apply for the Janken, or Masanya graduation since they are the same weekend as Wasamin’s next big concert. Hopefully some national events will pop up that I can go to.